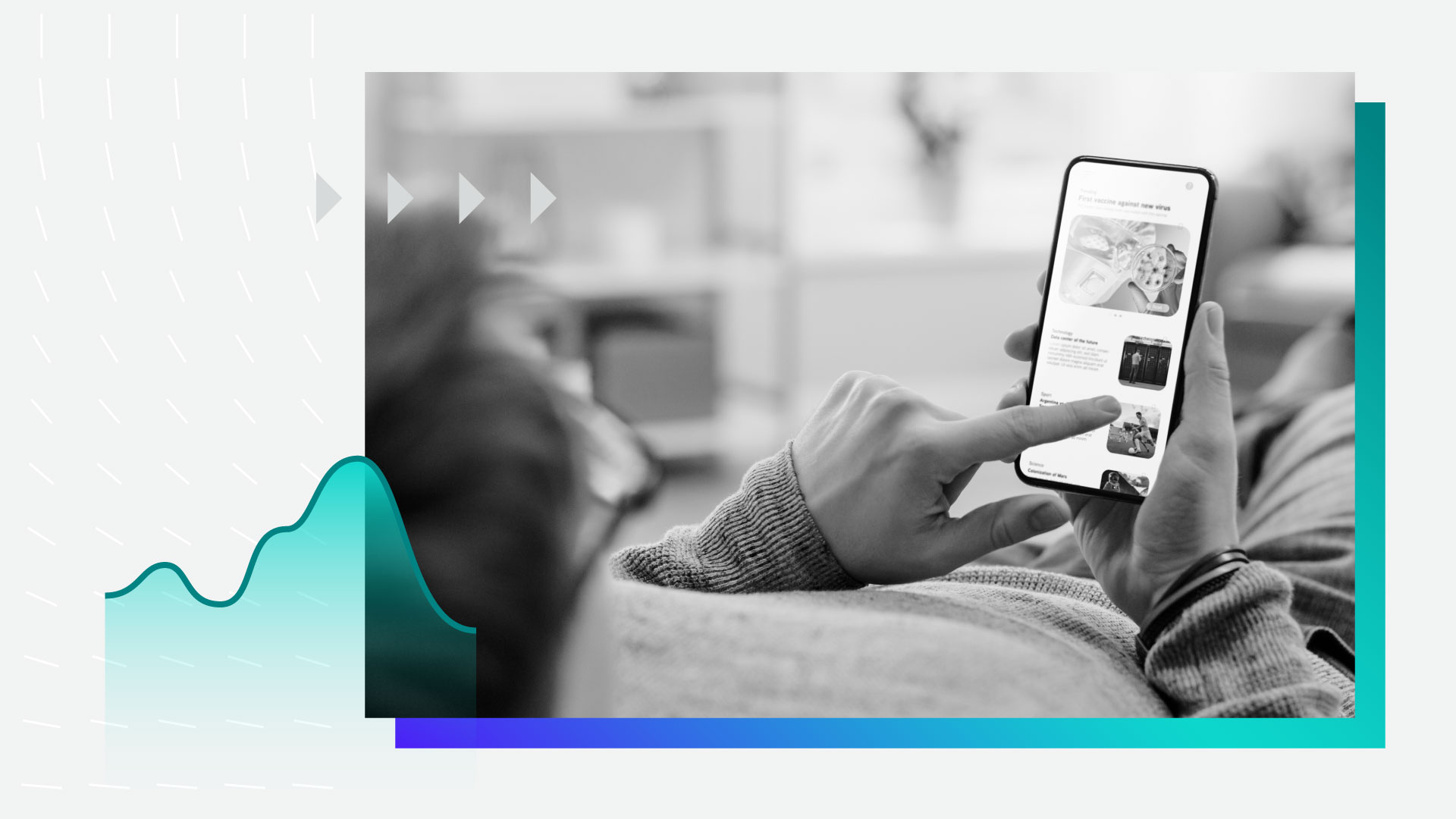 Surfacing relevant news content can meaningfully help major social networks with user retention and engagement, but platforms need to consider the significant cons to staking their long-term core competencies on facilitating the dissemination and discussion of current events.

Major social media players have come a long way from simply facilitating connections between friends and have never hidden their ambitions to also be news dissemination platforms. The rationale is simple: Platforms become stickier environments when there’s more content for users to discuss.

And acting as de facto news platforms has helped social networks reap benefits: They’re now more of a leading news source among U.S. adults (and Gen Zers in particular) than traditional mediums like linear TV or radio, for example. It also explains why Elon Musk said in October that “a beautiful thing about Twitter is how it empowers citizen journalism.”

Still, social media players should be wary of how much they make news a core feature of their platforms, due to the way that issues that arise from news dissemination — like misinformation spread and user polarization — are negatively impacting social platforms in ways that aren’t always immediately apparent.

Morning Consult Brand Intelligence data shows that trust in most major social platforms, all of which disseminate news in some way, dropped between the first nine months of 2020 and the same period in 2022. 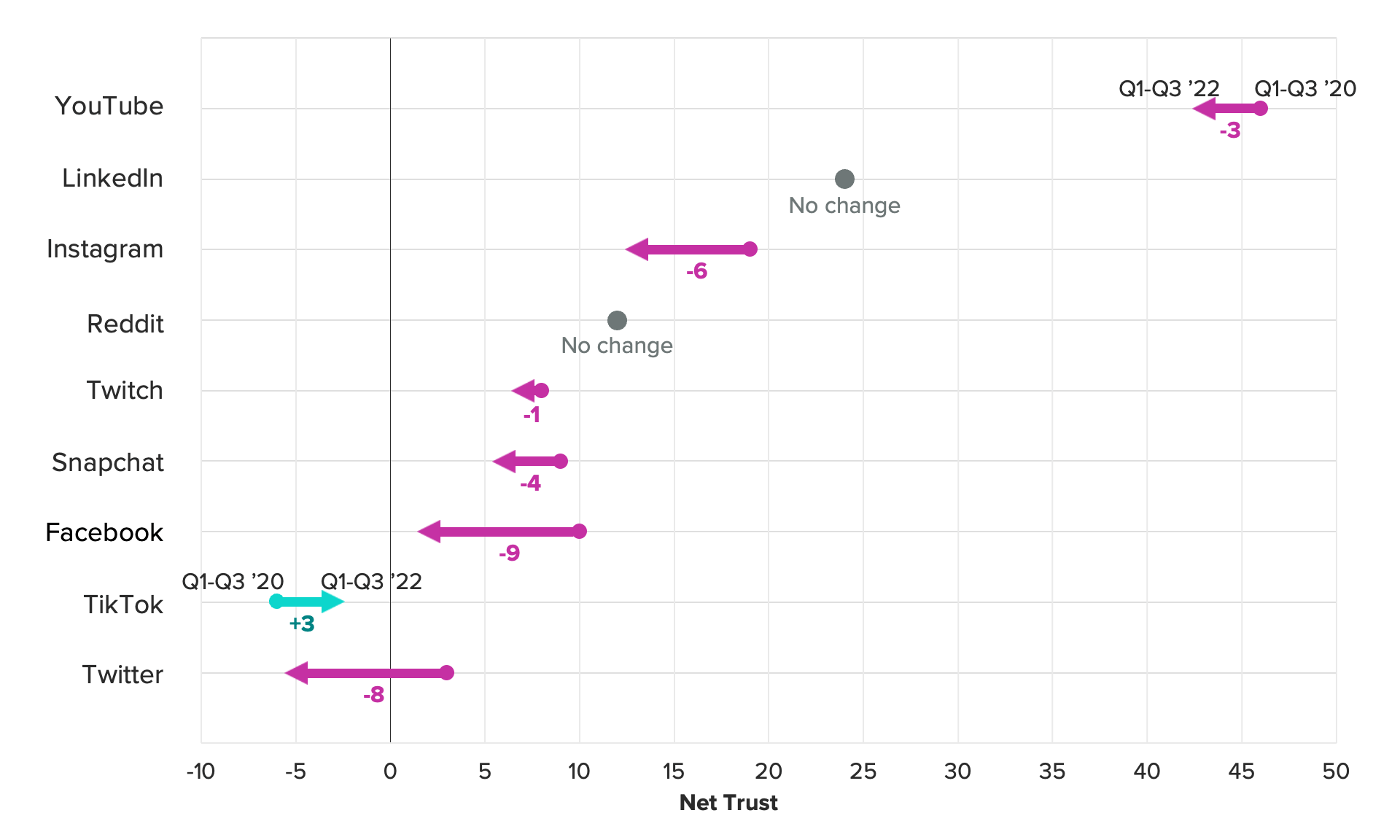 Notably, trust dipped the most for the two social platforms used most heavily for news consumption: Facebook and Twitter. As of October, 55% of U.S. adults said they had used Facebook for news in the past month, and 48% said the same about Twitter, shares that dwarf those for any other social media platform Morning Consult asked about (39% for YouTube and 37% for Instagram, for example). With so much news being consumed on Facebook and Twitter — particularly partisan-tinged political content — it stands to reason that these platforms would struggle with issues of fake news and divisiveness and lose more trust as a result.

While there isn’t a perfect correlation between how heavily a platform is used for news and how much trust is lost, that’s more of a function of user demand for different types of content from different platforms: TikTok, for example, which 36% of U.S. adults said they use for news, gained in net trust between 2020 and 2022. At the same time, TikTok’s user base doesn’t have quite the level of demand for news as Facebook’s or Twitter’s does; the same logic applies to YouTube. Twitter and Facebook are by far the most popular platforms U.S. journalists use for their jobs, and a September analysis by Axios found that Twitter, Facebook and Instagram were respectively the No. 1, 2 and 3 ranking social platforms in terms of major publishers’ collective follower sizes. Moreover, Facebook and Twitter easily had the largest number of fact-checked misinformation posts among five major social networks in a recent analysis by the Integrity Institute.

Another reality is that hard news discussions inevitably result in partisan debates, given the political climate of the last decade. This likely leads to certain political ideologies being overrepresented on the platforms where users consume news the most, and platforms face higher difficulty in maintaining trust levels as a result of having a user base that skews heavily toward one political ID. Morning Consult data from September shows that of the major social platforms, Twitter had the user base that skewed most toward self-identified liberals, whereas Facebook was the only platform with a user base that leaned toward conservatives.

Share of respondents who said they used the following platforms at least once in September: 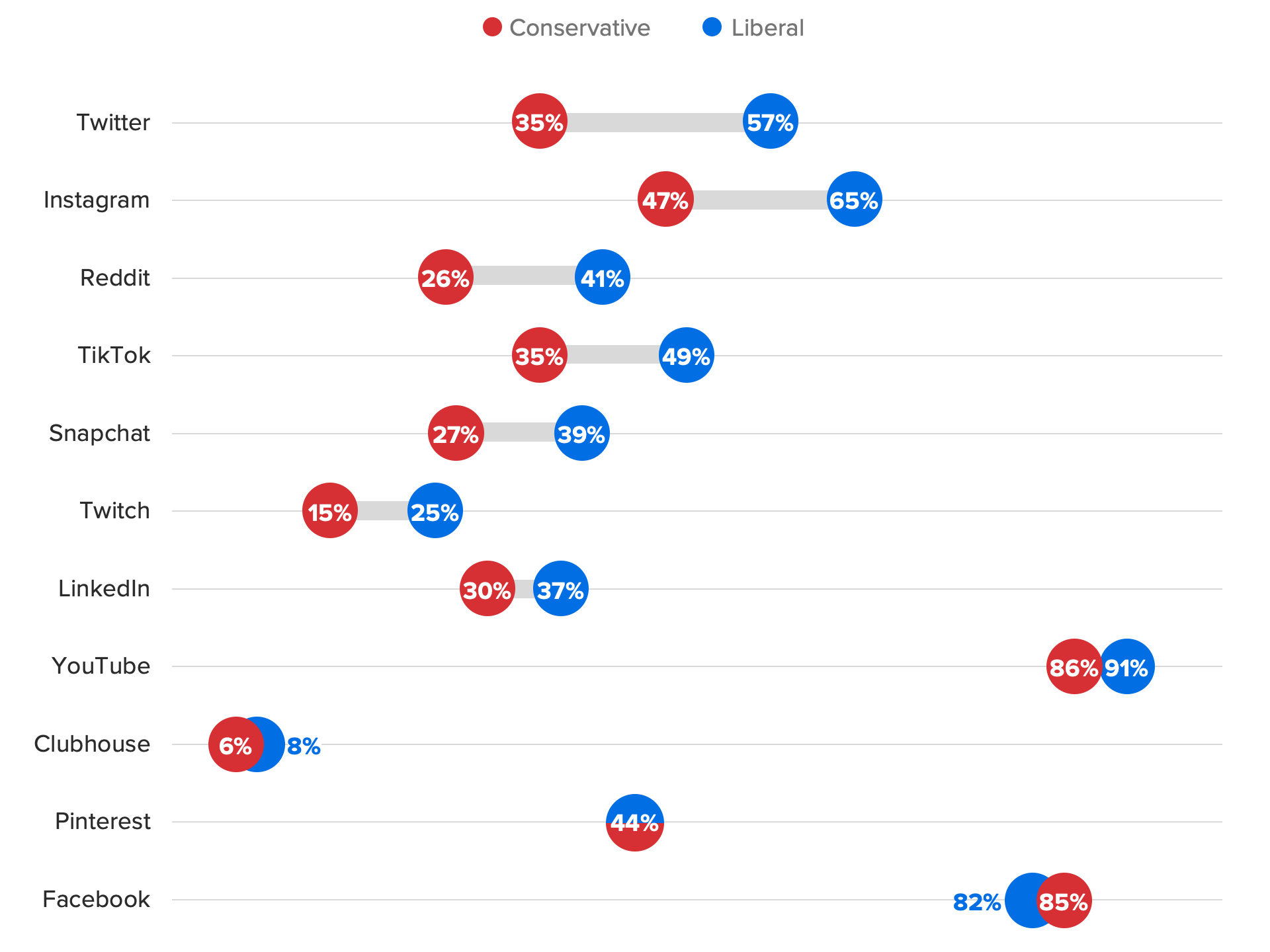 Survey conducted Sept. 28-29, 2022, among at least 663 U.S. adults who identified as either liberal or conservative, with an unweighted margin of error of +/-4 percentage points.

The dominance of liberal versus conservative users is in line with the latter group’s lower usage of other major digital media platforms. And conservatives’ less frequent use of major social platforms is likely in part due to their view of social media as biased favorably toward liberals. However, it’s unlikely that major social platforms will succumb to pressure to significantly change their content moderation policies, which suggests that polarization of users on these platforms will continue to be an issue for years to come.

While drops in trust can be caused by many factors not related to news, it’s likely that amplification of news content and current-event-related discussions is a significant driver of such dips. For example, when asked why they trust the social media platforms they do, respondents cited limiting fake news as the most popular reason, closely followed by access to friends and family and limiting objectionable content.

Respondents were asked if any of the following are a reason why they trust the social media platforms they do:

Survey conducted Sept. 17-18, 2022, among 2,134 U.S. adults who said they used a major social media platform at least once in the past month, with an unweighted margin of error of +/-2 percentage points. Figures may not add up to 100% due to rounding.

Despite similar shares of consumers who said each of the top three reasons above affected their trust in social media, curbing fake news should be a priority. Further Morning Consult research suggests fake news was more of a distinct factor in consumers’ decision to quit a social media platform than it was in their choice to trust one. Of those who stopped using a certain social media platform over the last 12 months, 44% cited the prevalence of fake news as a major reason why, while the shares of consumers saying they stopped using a platform due to objectionable content (37%) or friends and family not using it (22%) were noticeably lower.

Share of respondents who said each the following was a major reason why they stopped using a particular social media platform in the past 12 months:

Survey conducted Sept. 17-18, 2022, among roughly 470 U.S. adults who said they had stopped using a social media platform in the past 12 months, with an unweighted margin of error of +/-5 percentage points.

The future of news on social platforms

Still, it’s not like more couldn’t be done to clamp down on the amount of misleading information that is spread, especially on the two platforms that have lost the most trust.

For example, Facebook does not fact-check politicians unless it involves content that’s been previously debunked, but it should think about reconsidering this stance. Moreover, Facebook has room to improve in its ability to fact-check content in non-English languages; the prevalence of misinformation in Spanish is particularly concerning, as it’s the second most spoken language in the world in terms of native speakers.

Meanwhile, Twitter cannot afford to become lax on its misinformation fight, regardless of Musk’s desire to champion free speech. He has already signaled interest in developing a content moderation body like the Oversight Board Facebook launched, but he has an opportunity to make Twitter a more trustworthy place by expanding the number of fact-checkers involved with Birdwatch (which is being rebranded as Community Notes), which has already seen some success in curbing misleading content.

Ultimately, the reality is that abandoning news partnerships entirely or discouraging high-profile users from discussing news is not feasible, but social platforms should consider the benefits of becoming less reliant on news content for engagement and encourage users to more regularly interact with casual, entertaining content instead. After all, this is one of the biggest strengths of TikTok, a company that has specifically pitched itself as an “entertainment” platform rather than a social one.

It’s already benefiting from its approach of amplifying lighthearted content — as our data shows, TikTok was the only major social platform to see an increase in net trust between 2020 and 2022 (though it’s worth noting TikTok still had net negative net trust as of the end of the third quarter).

Besides, other social platforms are already aiming to become more TikTok-like in terms of content strategy. For example, Facebook earlier this year shifted resources away from certain news products to focus more on supporting content creators’ growth. And parent company Meta Platforms Inc. is in the process of reworking its products to recommend more content like Reels from accounts that users don’t follow. Meanwhile, Musk has already teased that he may bring back short-form video app Vine, which Twitter previously acquired but shut down. Reviving it could help spur more entertaining non-news content to be uploaded to Twitter and cause fewer users to view it as a news-heavy platform.