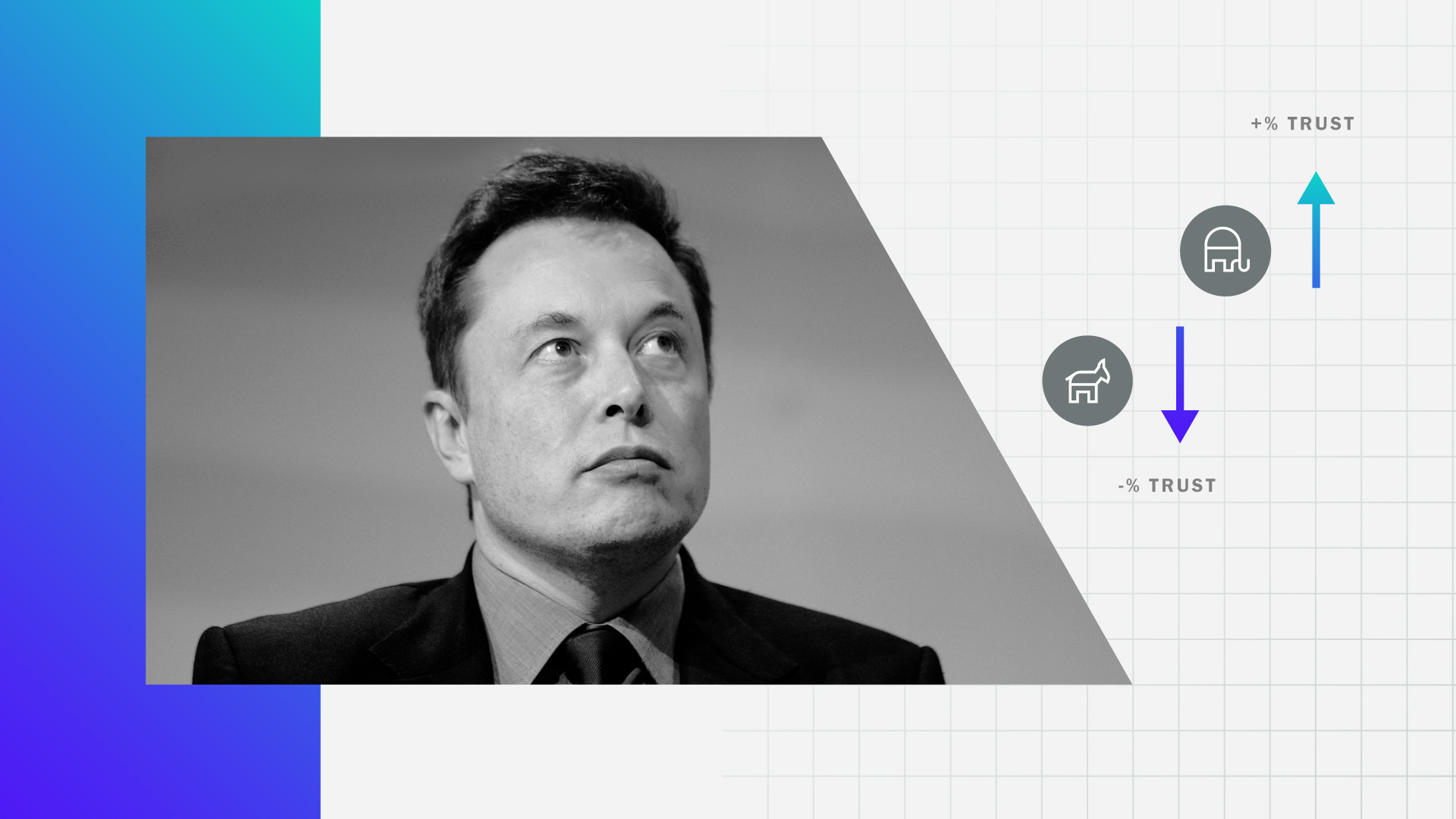 Elon Musk’s takeover of Twitter Inc. has had a deeply politically polarizing effect on the social media brand, an effect that’s rippled into his other companies, Tesla Inc. and SpaceX. This has profound implications for advertisers, investors and consumers.

Elon Musk has turned Twitter’s fan base upside down in the past few weeks. Democrats are increasingly viewing the platform with antipathy and distrust as Republicans move in the opposite direction. Morning Consult Brand Intelligence data also suggests it’s fair to question whether Musk’s stewardship of the social media giant runs the risk of collateral damage to his other well-known properties.

Musk’s acquisition of Twitter has dominated major news cycles for months, with each new revelation throwing the company’s fate into question. Since the takeover became official on Oct. 27, Musk has laid off thousands of Twitter employees and contractors, fired many of Twitter’s top executives or seen them exit, released an ill-fated revamp of the platform’s verification system and threatened to “thermonuclear name & shame” companies that pull their advertisements from the site.

This has caused Twitter to experience the most significant month-over-month shift in opinion among Democrats since Morning Consult began tracking the brand in January 2017.

Net favorability and trust of Twitter, by political party affiliation 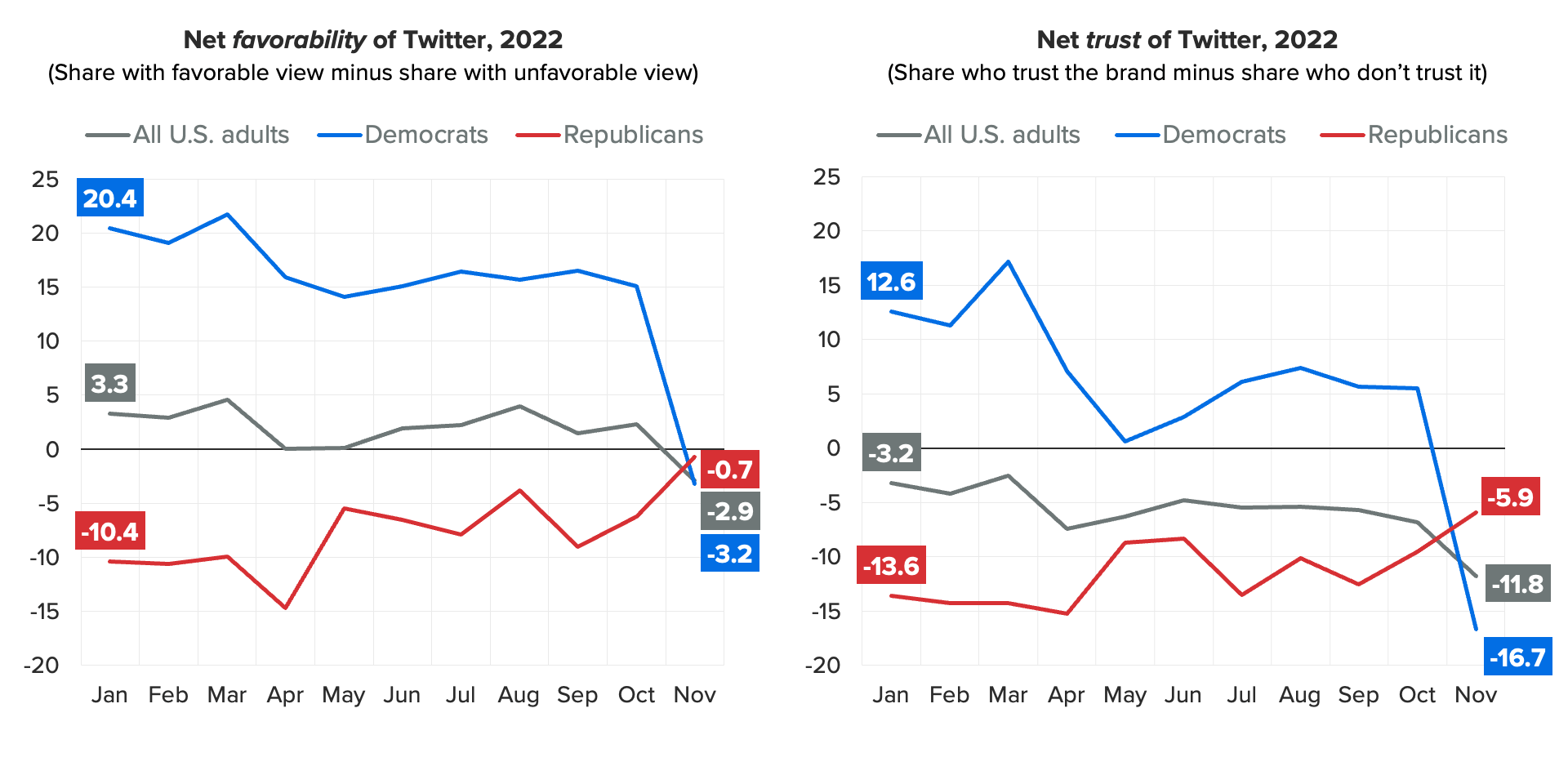 These sudden and massive shifts in perception are increasing the risk of advertising on Twitter as the rules around content moderation seem to be in flux or absent altogether. This only compounds the uncertainty created by layoffs and attrition at Twitter that have put its product development and data security in jeopardy, along with the bungled rollout of the company’s new verification system, Twitter Blue, which led to a spree of “verified” accounts impersonating celebrities, politicians, governmental organizations and brands.

The impact of the latter is already proving significant. Just last week, an account impersonating the pharmaceutical company Eli Lilly and Co. tweeted that the company would make insulin free; Eli Lilly had to officially respond that this was not the case. For an $8 subscription, an impersonator sparked a 4.5% drop in Eli Lilly’s stock, and also potentially cost Twitter millions in lost ad revenue as the company pulled its digital ad campaigns from the platform indefinitely.

There were already hints at Musk’s polarizing effect in Morning Consult data. A recent report on expectations of corporate leaders examined who Musk’s fans and detractors are. The late September survey found that 64% of Republicans had a favorable opinion of Musk, compared with just 37% of Democrats.

Up until now, Musk’s polarizing personal brand had a limited impact on Tesla and SpaceX, but Oct. 27 acted as a break in the dam. Whereas impressions of Twitter have always been deeply divided between Democrats and Republicans, Tesla and SpaceX were largely nonpartisan with similar impressions on either side.

Now, Musk’s sharing of misinformation about the attack on House Speaker Nancy Pelosi’s husband in a tweet that was later deleted, along with his very public and explicit endorsements of Republican positions and candidates — such as recently encouraging people to vote GOP during the midterms — are impacting the other brands he manages.

Shift in net favorability between October and November 2022

For Tesla and SpaceX, the partisan spillover effects could have profound implications. If the Tesla brand becomes increasingly right-leaning, that could put it out of alignment with core electric vehicle purchasing profiles, which lean more liberal. And for SpaceX, Musk’s tussles with government officials and recent threats to pull the company’s Starlink satellite internet service out of Ukraine could be creating the impression that he and his companies are too unreliable when it comes to government contracting.

For Twitter, the decision for brands on whether to advertise on the platform right now is fairly straightforward. With millions in ad budget at stake, the uncertainty of the platform’s future and the significant brand risk created by its verification debacle are understandably too much for advertisers to stomach. Barring what a potential change in leadership might do, the future points to further polarization of the platform and a continuation of lax content moderation, elements that will only add to these risks.