Media & entertainment analyst Kevin Tran unpacks why a surprisingly high number of the most popular shows in 2022 came from traditional TV networks, rather than video streaming services 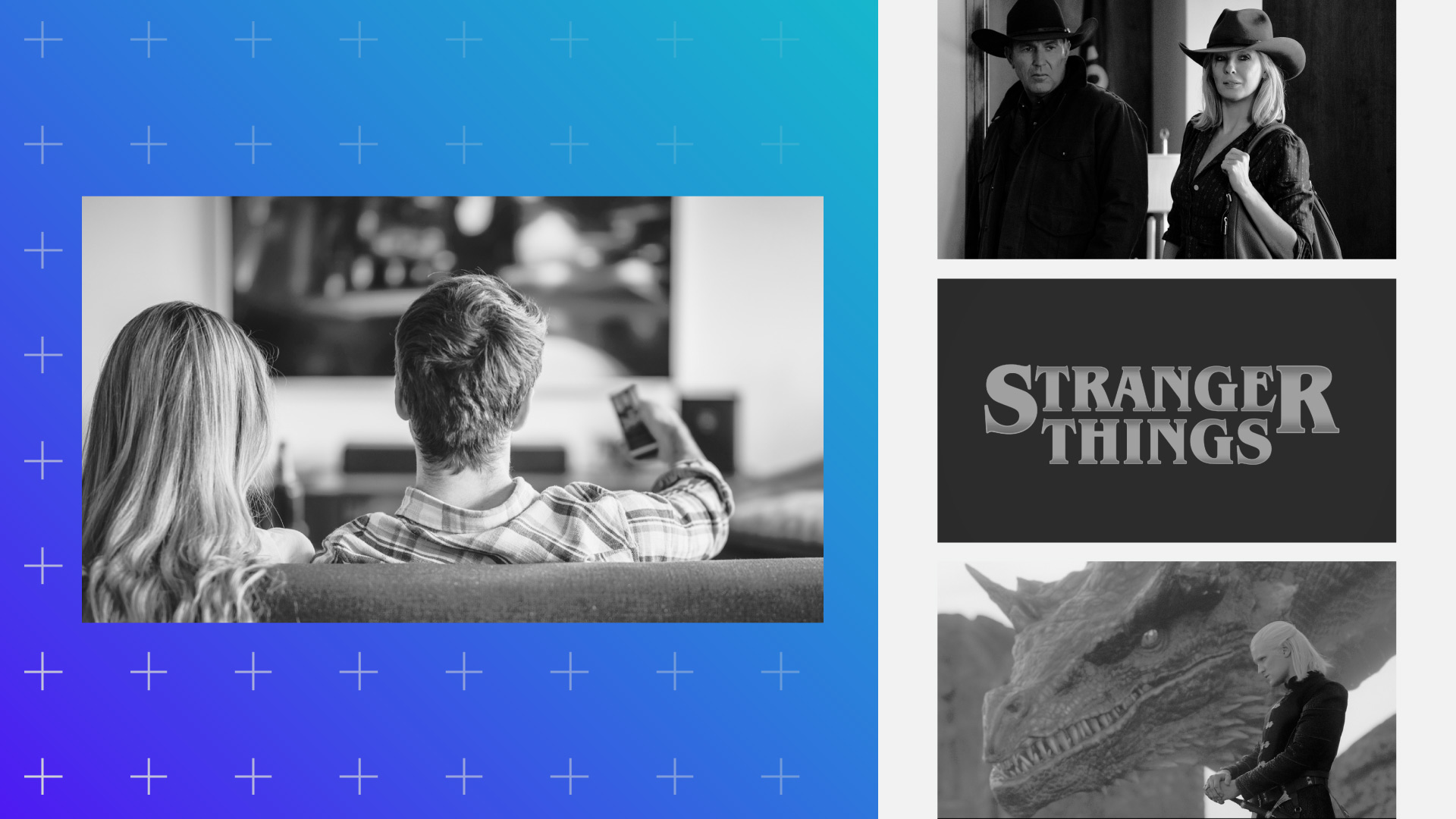 While so many of the conversations about TV hits focus on streaming originals, media companies need to continue to feed linear channels with compelling content and remember how traditional TV can meaningfully boost a title’s ultimate cultural impact.

After years of chasing streaming subscribers with reckless abandon, this year saw media industry execs recalibrating themselves. As Morning Consult pointed out recently, Netflix’s subscriber growth stumbles in early 2022, along with the challenging macroeconomic environment, have discouraged media companies from operating with a “subscriber growth at all costs” mindset. Part of this means being selective on where to spend lavishly on flashy straight-to-streaming shows.

And while several big titles will drop over the next month, new Morning Consult research on consumers’ favorite TV shows this year provides further validation for strategies that eschew going all-in on a video streaming push: Over half of the 20 titles consumers were most likely to name as their favorite TV shows of 2022 aired on linear TV, rather than streaming exclusively.

Morning Consult asked respondents at the end of October to name their favorite TV show released in 2022, and through an open-end analysis found that — of those with a clear favorite show of the year — “Stranger Things” (5%), “House of the Dragon” (3%) and “Yellowstone” (2%) were the top picks.

The share of respondents who named each of the following as their favorite TV show of 2022: 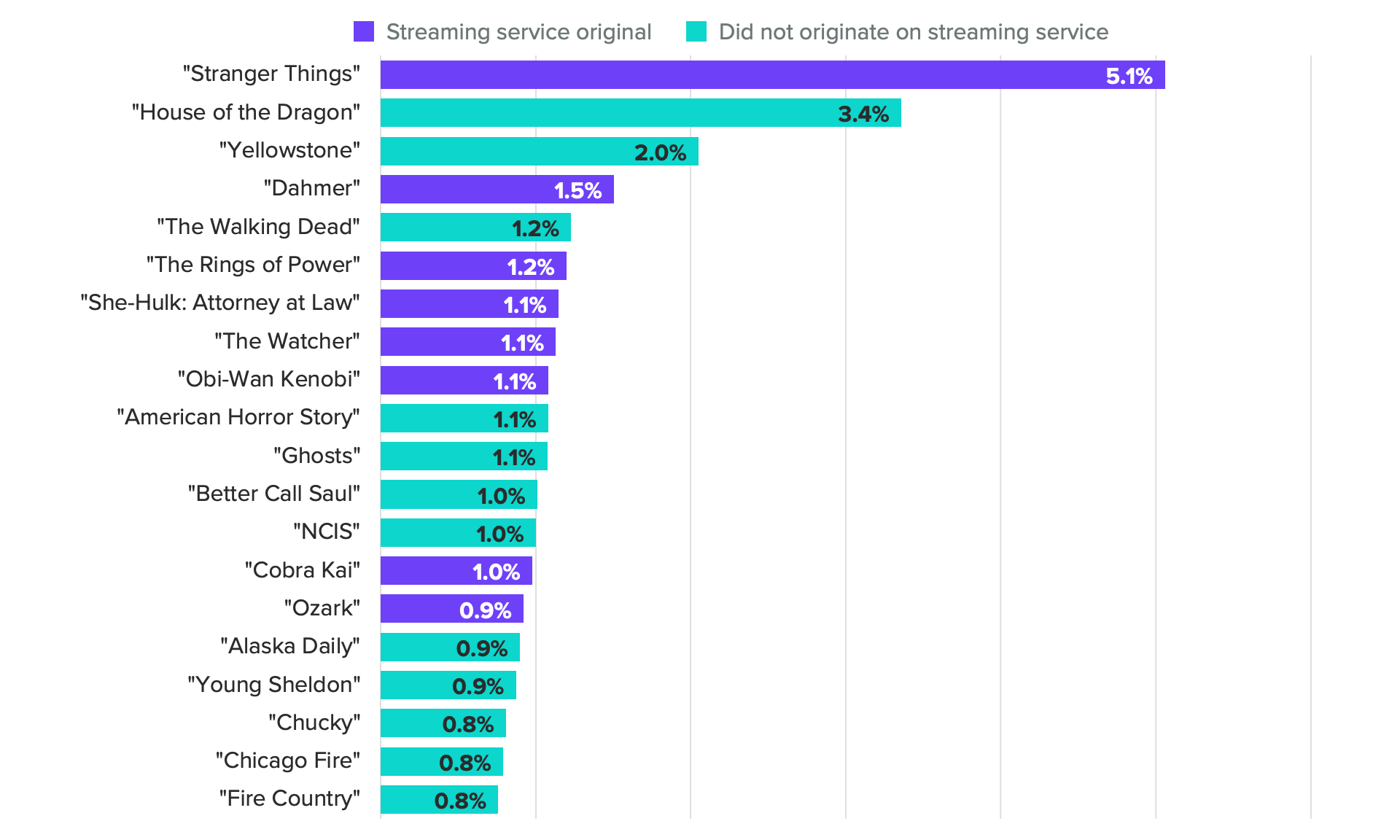 While those percentages may not seem big, getting obvious consensus on TV shows when the market is this crowded with programming options is already a major success in the age of peak TV.

While many of the most popular TV shows of 2022 speak to linear TV’s ability to amplify hits, the top two favored titles highlight how well big-budget TV can gain steam across streaming platforms: The latest season of “Stranger Things” is Netflix’s most-watched English TV series in terms of viewership within a month of debut, while the “House of the Dragon” debut episode in August was HBO Max’s most-watched series premiere to date. And as our previous analysis notes, in the post-Netflix correction era, there is nothing more “need to have” than big-budget titles that travel well globally.

Beyond the two shows’ massive budgets, “Stranger Things” and “House of the Dragon” were also able to break through because they didn’t debut all of their episodes at once: “Stranger Things” released its latest season in two parts, while “House of the Dragon” was on a weekly release schedule. Binge releases won’t ever fully go away, but the weekly release strategy is important for helping marquee programs steadily build up buzz.

Looking at 20 most commonly cited titles, the fact that so many shows weren’t streaming exclusives serves as an important reminder that even as linear TV’s decline continues, broadcast and cable remain important sources of entertainment and valuable tools in maximizing reach because Americans still get the majority of their television via those traditional channels.

Titles like “The Walking Dead” (AMC), “American Horror Story” (FX) and “NCIS” (CBS) respectively took the fifth, 10th and 13th spots on the list, even though these shows flew under the radar of many heavy-streaming cord-cutters in 2022. Of course, linear TV titles inevitably become available to stream on subscription video-on-demand services, but the level of viewership and consumer recognition that titles like “NCIS” and “TWD” receive wouldn’t be anywhere near where they ultimately end up without a linear TV push.

For example, “NCIS” and “TWD” were among the top 100 most-watched television series of the 2021-2022 season: The former show averaged over 11 million viewers on CBS during the 2021-2022 season, while that figure was nearly 3 million for the latter on AMC.

Most emblematic of linear TV’s surprisingly steady ability to drive zeitgeisty hits is “Yellowstone,” which airs new episodes on Paramount Network. It may seem surprising that more people cited “Yellowstone” as their favorite show of the year than big-budget streaming hits like Amazon’s “Rings of Power” (reportedly the most expensive TV show ever), but the popularity of the Montana family ranch drama speaks to the types of consumers that still favor traditional TV. “Yellowstone” is particularly appealing to older conservative viewers, a demo that streaming services have largely struggled to win over, and it’s likely why the show was the most-watched non-NFL TV program of last year — which is why Paramount has entrusted show creator Taylor Sheridan with so much money to create spinoffs. (Seasons 1 through 4 of the show are now streaming on Peacock, but the currently airing season isn’t on an SVOD platform yet.)

Linear TV is able to still make a big impact culturally — 31 of the top 50 shows consumers most commonly cited as their favorites of 2022 were not streaming service originals  — because so many Americans continue to pay for it in order to access live content like news and sports. Moreover, virtual multichannel video programming distributors like YouTube TV and Fubo TV, which offer access to live TV, amplify the reach of traditional TV networks. In October, 50% of U.S. adults reported using cable TV at least once, while that figure was 30% for YouTube TV, the biggest vMVPD service. 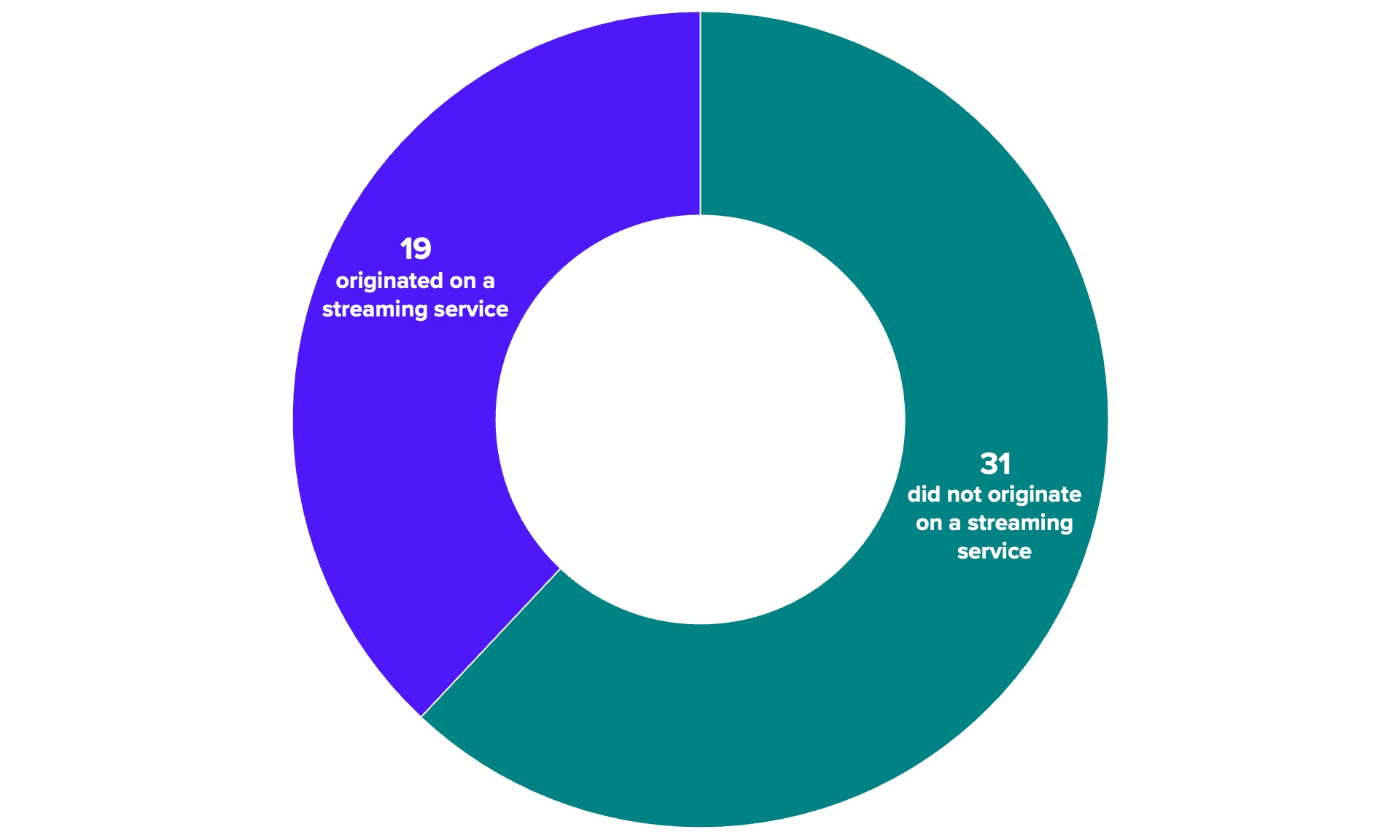 The fact that linear TV helped breed so many fan favorites in 2022 is a reminder of how much revenue traditional networks still generate. In its fiscal fourth quarter, Disney generated $6.3 billion in revenue from its linear networks, while that figure was $4.9 billion for the company’s direct-to-consumer segment. Warner Bros. Discovery generated $5.2 billion from its TV networks segment in Q3, while that figure was $2.3 billion for its direct-to-consumer segment. Because of this, media companies should avoid being too aggressive in pulling back linear TV programming in the years ahead, even as time spent with streaming increases.

Media conglomerates should not lose sight of their ability to lean on traditional media platforms in order to increase the overall impact of streaming programs. With airings on traditional TV, a streaming program would be able to reach certain consumers — namely Gen Xers and baby boomers — who don’t use streaming platforms as frequently. For example, the fact that “House of the Dragon” aired on HBO and HBO Max simultaneously this year is likely a big reason that more consumers named it as their favorite show of the year compared to “Rings of Power.”

Consumers say Netflix’s TV bested all other streamers in 2022

While companies should be selective about airing streaming programming on traditional TV to avoid cheapening their subscription services, they need all the extra reach they can get to be able to compete with Netflix’s massive head start in terms of subscriber count.

Netflix by far remains the service with the largest reach — the share of U.S. adults who used it at least once in October was 23 and 49 percentage points higher than that of Disney+ and Apple TV+, respectively. This explains why a plurality of adults last month said, of all streaming services, Netflix released the best TV shows in 2022, despite bid-budget and high-quality programming from other services such as “Ms. Marvel” and “Pachinko.”

The Los Gatos-based streamer’s buzzy TV run this year helps explain why: Aside from season 4 of “Stranger Things,” some of the most popular English-language Netflix series ever — such as “Inventing Anna” and “Bridgerton” — also either debuted or released new episodes in 2022.

Number of respondents who said each of the following streaming services released the best TV shows in 2022: 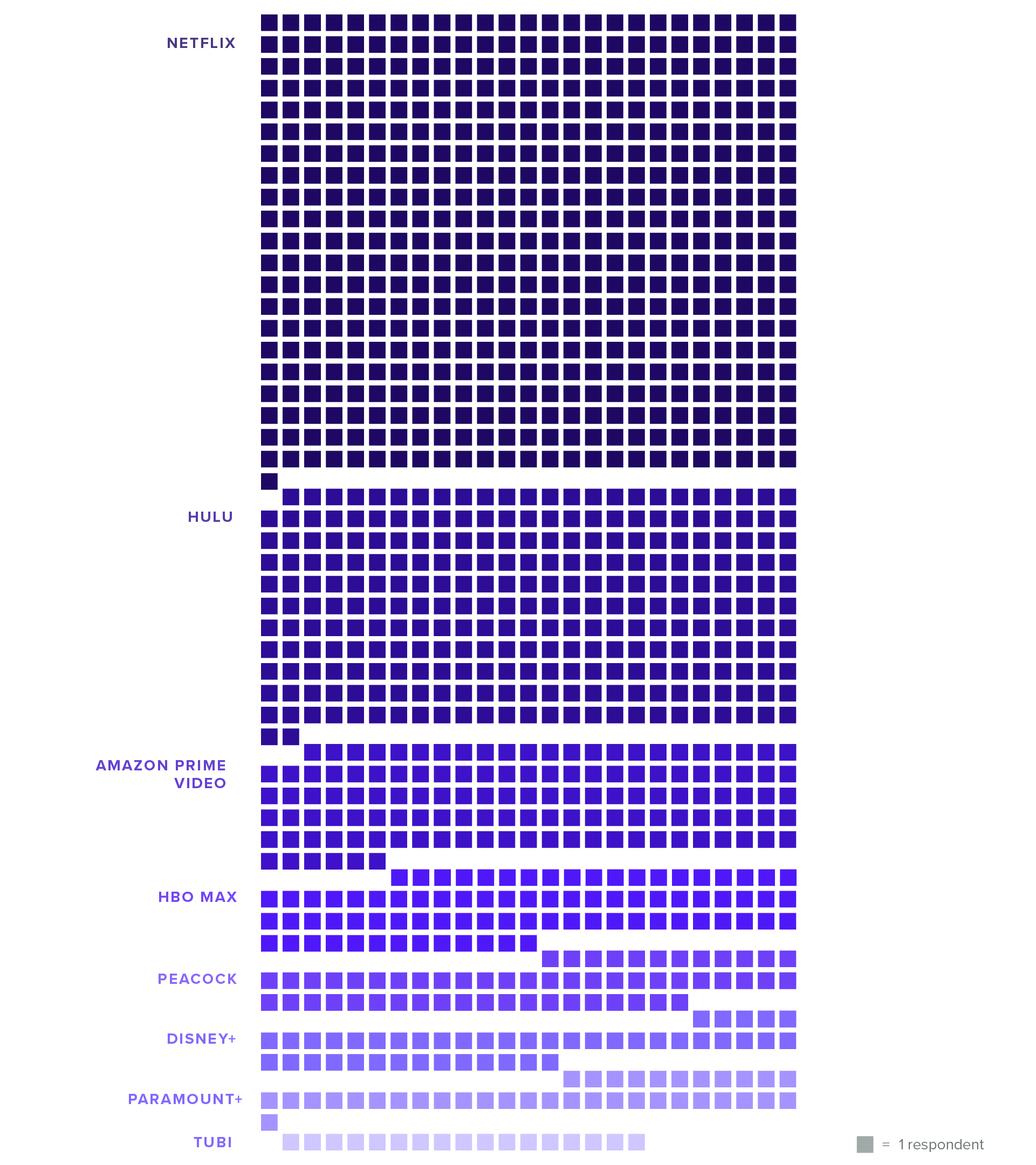 As the economic environment remains less than ideal, it will be crucial for media companies to find more cost-effective ways to grow. Certain networks are already leaning away from scripted content as a cost-cutting measure, and one way to fill vacant hours on the programming schedule is with certain streaming originals. This could ultimately drive interest in signing up for subscription services, and is a competitive advantage that traditional media companies have over tech giants like Netflix and Amazon.