A majority of parents who believe the U.S. response to COVID-19 delegitimized inoculation campaigns still see importance of measles, polio, chickenpox and flu vaccines for their children 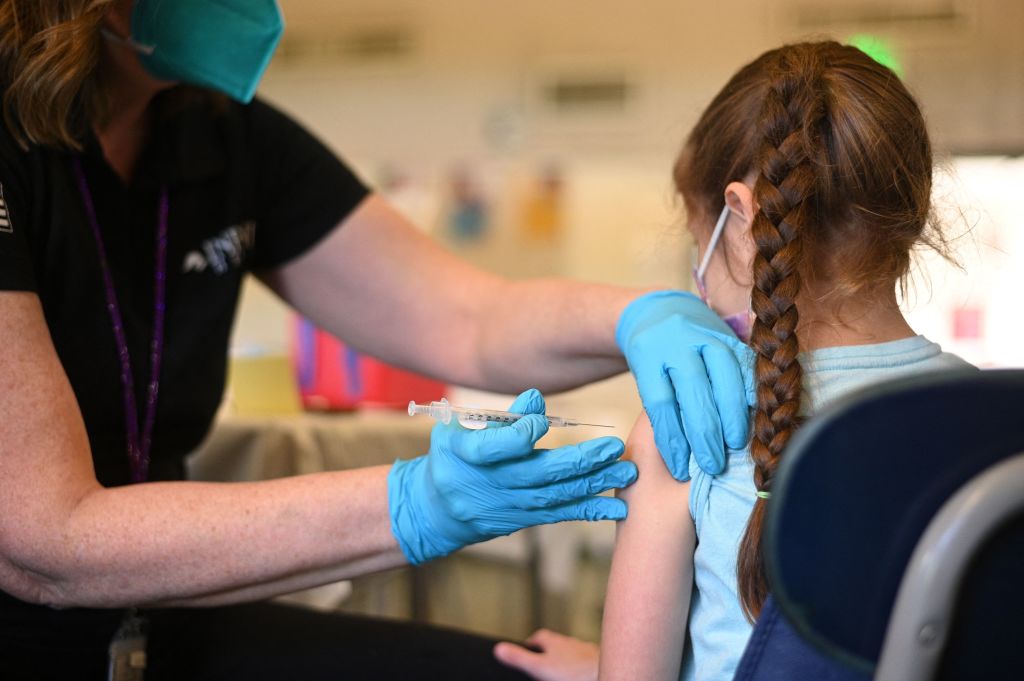 A nurse administers a pediatric dose of the COVID-19 vaccine to a girl at an L.A. Care Health Plan vaccination clinic at Los Angeles Mission College in the Sylmar neighborhood in Los Angeles, Calif., on Jan. 19, 2022. (Robyn Beck/AFP via Getty Images)
By Matt Bracken

Nearly two years after the rollout of COVID-19 vaccines, concerns about future immunization campaigns are top of mind for many public health officials and providers scarred by coronavirus misinformation and stubbornly high levels of hesitancy.

One theory that has gained traction in some medical quarters: Distrust of COVID-19 shots could lead to lower rates of routine childhood vaccinations. But new data suggests a spillover effect of that kind may not result in substantially lower uptake of well-established vaccines against measles, polio and chickenpox among children.

According to a Morning Consult survey, at least 3 in 4 parents of children under 18 said they believe measles, polio and chickenpox vaccinations are important for their kids. Meanwhile, parents of children under 18 who believe that “the COVID-19 pandemic has proven that vaccines are not necessary to keep the country safe from infectious diseases” are largely in agreement on the importance of those three shots for their children.

The shares of parents who said vaccinations for the following illnesses are important for their children:

“When people started saying there would be spillover, I said: ‘Everyone hold on. There’s no data, right? It’s literally people reaching out to individual doctors’ offices, right? And what are doctors saying? They’re saying that there are more questions about childhood vaccines,’” she said. “Questions don’t indicate a reluctance to vaccinate.”

Vaccine backsliding in the COVID-19 era

The pandemic did usher in noteworthy slides in a few key vaccination rates, though it’s unclear if wariness about coronavirus shots specifically fueled those declines. According to data from the Centers for Disease Control and Prevention, coverage for required vaccines in kindergarteners for the 2020-21 school year was 94%, down approximately 1 percentage point from the previous year. The CDC and World Health Organization, meanwhile, found that a record-high 40 million children missed a measles vaccine dose in 2021, a “significant setback in global progress” toward stamping out the disease, the agencies said.

And in 2022, measles outbreaks were reported in Ohio and Minnesota, while polio silently spread in New York and an unvaccinated man there was hospitalized after suffering from paralysis.

Although those statistics have elicited warranted cause for concern, there are likely other factors at play. Abram Wagner, a research assistant professor in epidemiology at the University of Michigan’s School of Public Health, noted that the pandemic created a slowdown in appointments, which in turn forced doctors to play “catch-up” to ensure children received their recommended shots.

Still, while the Morning Consult data struck Wagner as “somewhat encouraging,” it also suggested to him that with childhood vaccines, “we’re kind of at a brink.”

“This is showing that there is a space in opinions for us to latch on to, to really rebuild trust in vaccinations,” he said. “And I think a lot of that would have to be through personal interactions with your primary care physician.”

But the survey results also indicate to Wagner that people have “potentially more concerns now, and maybe those concerns could kind of snowball into something greater.”

Most troubling spots for vaccine uptake are with flu, COVID-19 shots

The Morning Consult survey also removed parents from the equation and asked a sample of the general public how important they feel vaccinations are for measles, polio, chickenpox, COVID-19 and influenza, and the same question was posed to U.S. adults who said they believe the coronavirus showed that vaccines are not necessary. The gaps here, in contrast to those seen in the two samples of parents, were stark.

The shares of U.S. adults who said vaccinations for the following illnesses are important:

Majorities of the vaccine-doubting public still saw importance in the measles, polio and chickenpox shots, though they were at least 13 percentage points less likely than the broader population to say so. The flu shot, and especially the COVID-19 vaccine, are viewed much more skeptically by the former group.

The way measles, polio and chickenpox immunizations are seen by those with vaccine misgivings compared with how they feel about flu and COVID-19 shots might simply speak to “familiarity with the disease and familiarity with the vaccine,” Wagner said. Put another way, measles and polio vaccines, and to a lesser extent chickenpox shots, have decadeslong track records in disease prevention, he noted, while flu and COVID-19 vaccines are intended to prevent hospitalization and death but not transmission itself.

With the United States already experiencing a brutal flu season, elevated rates of RSV cases in children and a potential winter COVID-19 wave, DeWald views this as an especially crucial time to “reverse this opinion of, ‘Well, what good are vaccines?’”

Over the course of her 15-plus years working in the field, it’s become clear, DeWald said, that “top-down messaging doesn’t work,” while an emphasis on “putting community first” from people you know is the better communication strategy.

“At the end of the day, it comes down to the conversations that people have with their doctors,” DeWald said. “But more importantly, the people around them — family members, neighbors, community leaders.”