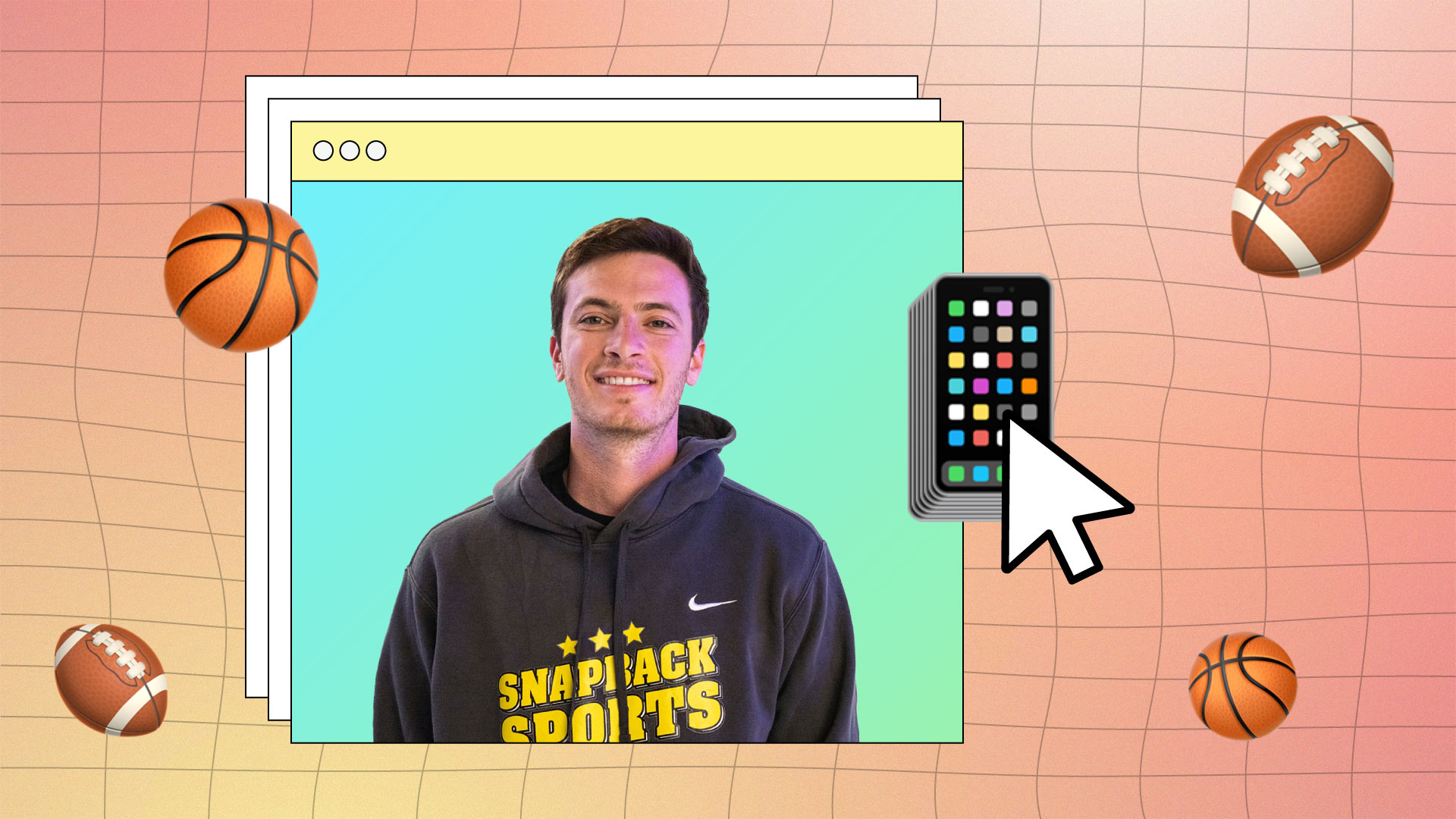 There aren’t many content creators with plans to attend every “Monday Night Football” game this season, but that is on Jack Settleman’s to-do list.

The 26-year-old creator believes he will fall about $15,000 under the $50,000 budget he allotted for himself and a friend to attend all 17 regular-season games, which air on the Walt Disney Co. family of platforms.

“I’m a huge believer in the idea that the best content for social media is found at a live sporting event,” Settleman said before his Dec. 5 trip to Tampa Bay, Fla., where he watched Tampa Bay Buccaneers quarterback Tom Brady orchestrate a 13-point comeback win over the New Orleans Saints in the game’s final minutes.

Settleman founded SnapBack Sports in 2017, originally a single sports-themed Snapchat account that has since grown into his broader digital sports and creator brand, encompassing a dozen sports-themed shows on Snapchat — half of which he hosts himself.

He also serves as a digital host for MSG Networks and the co-founder of SnapBack Agency, a management firm that works with digital creators and influencers. In its first year, the agency brokered $1.5 million worth of deals for its clients, he said.

“He’s the king of Snapchat for sports,” said Doug Bernstein, senior vice president of digital audience strategy for Warner Bros. Discovery Sports, parent organization of the youth-centric brand Bleacher Report, which has featured Settleman in some of its programming.

Settleman, a native of Owings Mills, Md., spoke with Morning Consult about the origins of “SnapBack Mondays,” the industry’s untapped potential in reaching Gen Z fans and what sports executives should keep an eye out for in 2023. This interview has been edited and condensed for clarity.

You’re attending each “Monday Night Football” game this season. Walk me through this initiative, its origins and objectives.

I worked at Action Network a few years ago and I had seen someone go to all 30 NBA games in 30 days and try to get on the Jumbotron at each game. I was like, “Could I travel and go to one sporting event every single day for a year?” You could get maybe Airbnb or a hotel to sponsor, a car sponsor, a gym. You could sell into it. You could get a ticketing and sports betting sponsor. That was the big idea. I started to map it out for a few months, then COVID hit, and then coming out of COVID I moved into an apartment with my girlfriend. There was no way I was going to be able to convince her.

That’s where the idea of “SnapBack Mondays” came about. It’s a condensed version of the original plan. What we’re trying to accomplish is three-fold. Can we create content in a viral manner to have more people hear about us and hear about SnapBack? The idea is that we don’t need to be at ESPN, who has the rights [to broadcast the games], but we can go create and tell the story of what it’s like to be at a “Monday Night Football” game in all of these cities. Can we sell against this and be profitable? We are successful in doing that.

This is about the importance of getting out to live sports. I’m a huge believer in the idea that the best content for social media is found at a live sporting event. We do these fan meetups at games where we take pictures with people at halftime and meet maybe 50 people each week. It adds up over time. That’s always been the thesis of SnapBack Sports. I’ve been directly replying to kids for five years now — it creates fans for life. After meeting 50 people a week across 17 weeks, we’ll have over 800 fans for life. It doesn’t sound like a big deal, but when you have that many super fans, you can directly market to them.

What else did you discover during the weekly “Monday Night Football” experience?

The difference in how each club embraces us has been really interesting. Some teams have no interest in working together, while others will go as far as custom jerseys, field-level passes, player interviews. It’s really interesting to see how each team is thinking about social and how content is captured.

The next generation lives on Snap. It’s the one platform where you’re not constantly filled with negativity. You go on Twitter and read the replies and quote tweets, it really dampens your mood. The same thing happens in the Instagram and TikTok comments sections. Since Snap doesn’t have a comments section, there isn’t this negativity that is constantly surrounding it.

The other aspect about Snap is they still have a spot on the app for your friends that isn’t mixed in with the general content. I used to like Instagram because I would see my friends’ Stories or the one picture posted every three weeks. Now, if you scroll through Instagram, it’s influencer, content creator, brand, influencer, content creator. I don’t see anything that my friends post anymore. Snap is still holding on. Snap also has this little-known secret about their Snap shows, which are high sources of revenue for brands that people have absolutely no clue about. The negative side is there’s no virality on Snapchat because content never really leaves the platform.

What can professional sports leagues and teams do better to reach Gen Z?

Work on getting fans into stadiums, but at a more affordable price. For some leagues, like the NFL, it’s so expensive. An NFL game for a couple might be $200 to get into the stadium. Then you want to enjoy yourself, buy a jersey, get a T-shirt, the price then gets up to maybe $400. That’s fine for a one-off experience but then you’re making this into a one-off experience. Is that repeatable?

Every team should absolutely hire a personality to constantly be in their content. That connects so much deeper with a fan base. I would quadruple down on Snapchat. That platform is so engaging. The reason we have so much success connecting with teams is because they’re happy to let us take over their Snapchat for the day. They don’t have the resources to spend time there.

Where is there still untapped potential for the industry?

If I was creating a strategy for a team or a league, I would dominate YouTube. I’d flood YouTube with highlights of my team or sport, analysis, funny clips. Then I’d find people to stream because there’s nothing more powerful than a live audience. We’ve seen that with [former NFL punter and sports media personality] Pat McAfee. He has 30,000 people tune in live. If he created a website and said, “click this button,” he would get 15,000 clicks on the spot. We’ve seen why he is so valuable. I would let the streamers offer a different viewpoint. Amazon tried it with the Dude Perfect broadcast, and they missed the mark, but it was a good attempt.

I would also create a nice in-stadium fan experience for that younger generation, even if that means making sure every NFL stadium has perfect WiFi — that is so crucial. My first question when I go to a stadium is, “What is your WiFi login?’ I’m always a bit nervous. I can’t post content. I can’t text my friends. I can’t follow along on Twitter.

How would you describe Gen Z’s relationship with sports?

The most common thing I hear is “Why would I ever, ever go to a one o’clock football game on Sunday? Why would you ever leave your couch, spend money, it’s hours to get there, it’s expensive to do it, I can’t track my fantasy team, I can’t bet, it’s sometimes cold.” You can sit on your couch and have everything you need — you can have your laptop up, you can have RedZone up, you can track everything.

By the way, if you were to go, unless you spend an exorbitant amount of money, you’re also sitting up top, so the view isn’t good. You don’t get the commentary. If a play happens and it’s being challenged, I don’t know if it’s a good call or not unless I go on Twitter.

The fan experience isn’t great at a lot of stadiums. A majority of people who don’t go to games, I think, don’t have any interest because they’re not going to get a great experience. And it’s not viewed as any form of entertainment, when really that’s what the entire game experience should be.

ESPN Chairman Jimmy Pitaro said recently that what most keeps him up at night is how the sports network can reach “the younger audience” and “be more relevant to younger people.” What’s your reaction hearing that?

My first reaction is hopefully ESPN will come buy SnapBack Sports because we’re talking to younger fans. My second reaction is ESPN won’t actually do anything about talking to kids and listening to what they want. Maybe ESPN will run a couple of studies, but no one on the ESPN social media team is going to be tasked with DM’ing kids asking, “What do you like about our content? Do you spend more time on YouTube or Twitch?”

Right now I’m watching Fox Sports 1 and [former soccer star and current World Cup analyst] Alexi Lalas is in a suit. No kid cares about some commentator in a suit anymore. It’s lifestyle, it’s streetwear brand. No one is conscious of that because it’s older decision-makers. Actually talk to the 23-year-old social media manager or the marketer who understands what the heck kids are doing and what they want.

What do you predict for the sports industry in 2023 across digital and social media? What’s next?

A move to long-form content. Quick attention is just the top of the funnel, but streaming, YouTube and podcasting is what will convert for creators. Creators will need to build businesses. They already have the audience to market to. That’s a complete flip from the old way of doing things. A coffee company typically builds a great product and then finds customers to market to. But “Big Cat” [Barstool Sports personality Dan Katz] already had a large, built-in audience, and just launched a coffee brand to sell to his fans.