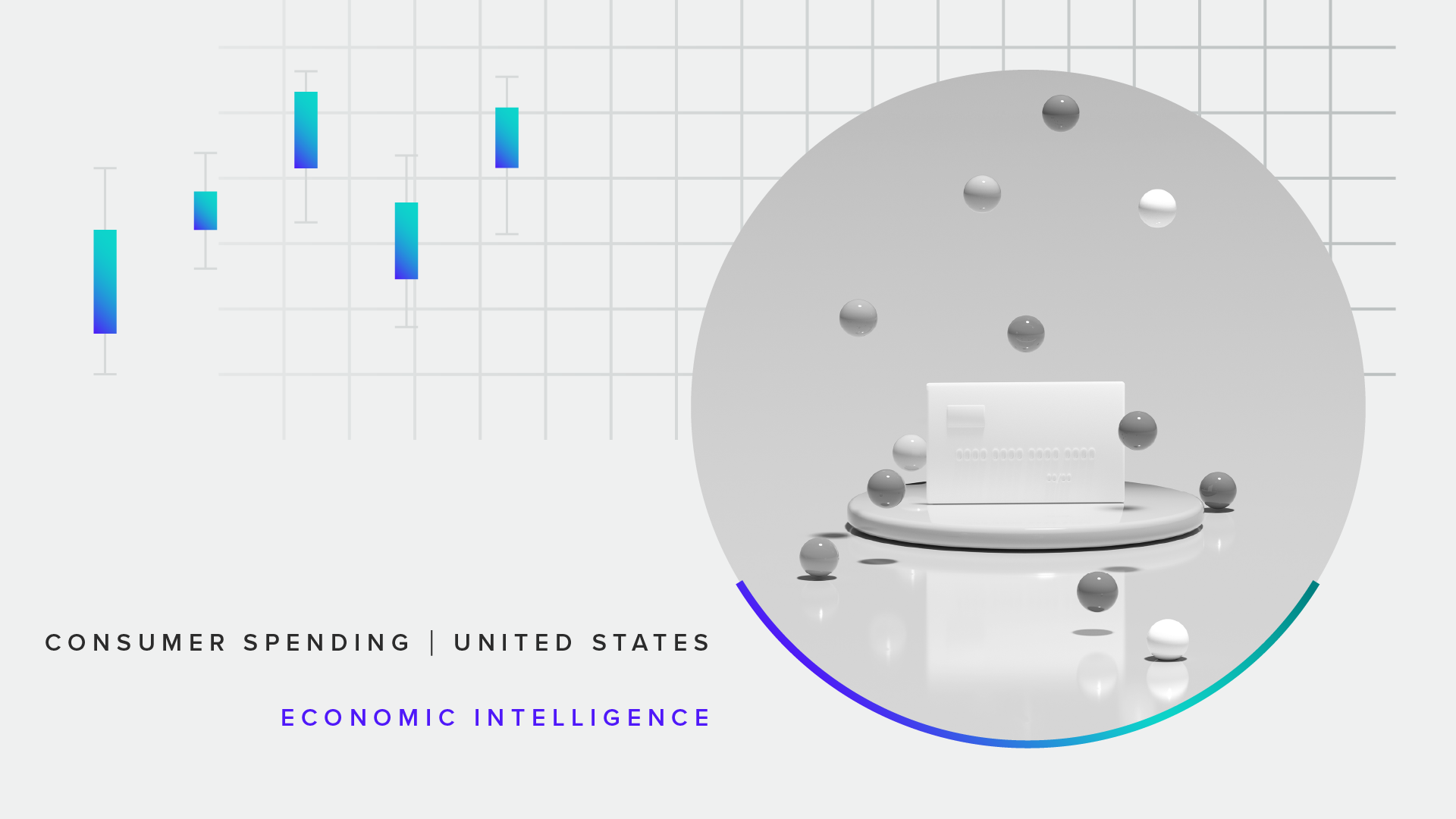 October spending boost appears to fizzle out in November

November appeared to bring a sobering return to softer spending growth after slowing inflation and rising wages coincided with a boost in outlays during the previous month. Morning Consult’s spending data showed a decline in overall spending since October, and the U.S. Census Bureau’s measure of retail sales contracted in both real and nominal terms. Meanwhile, signs of possible price relief are continuing to accumulate, suggesting the grip of inflation may loosen further in the coming months. 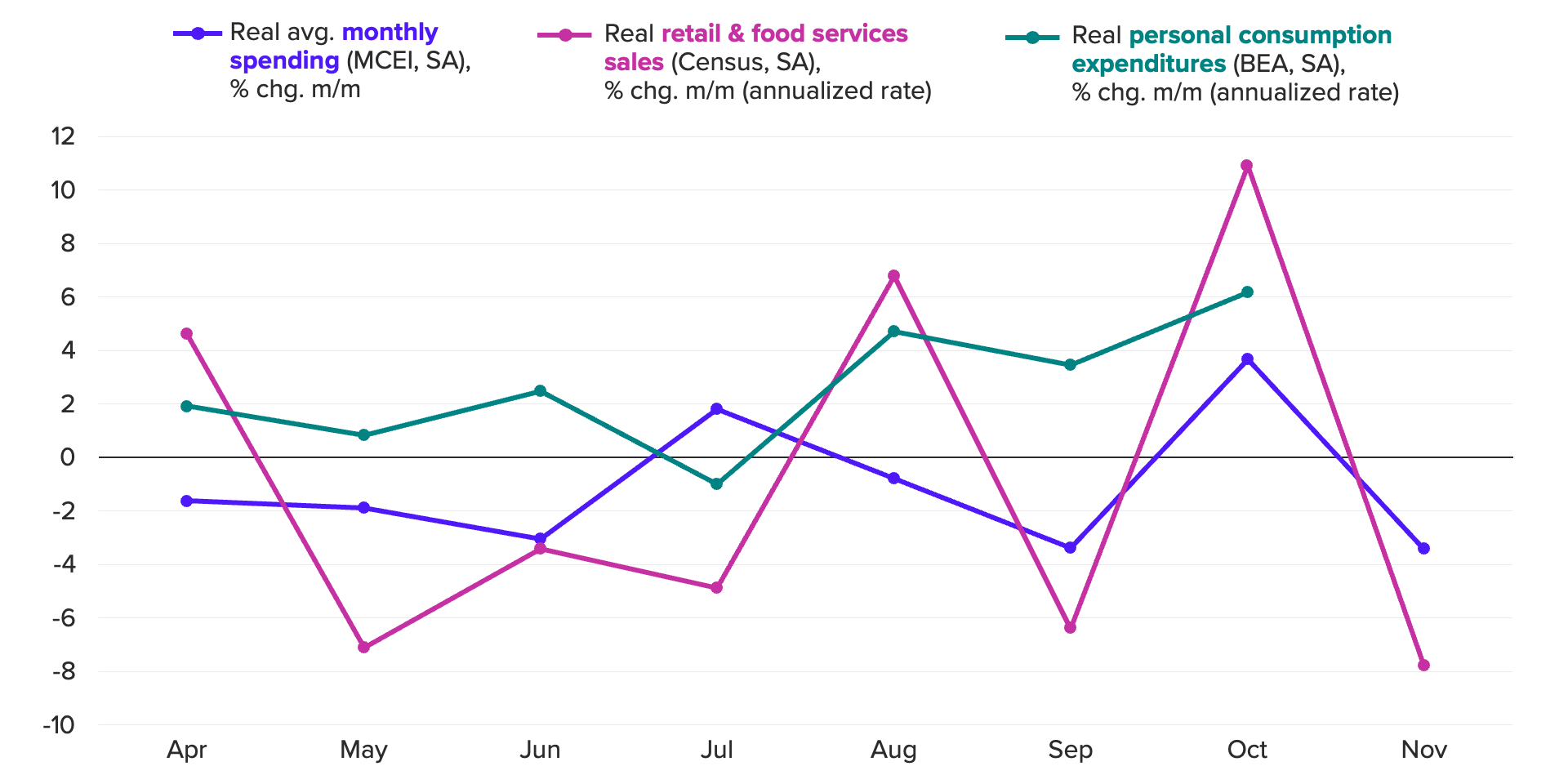 Morning Consult’s measure of real average spending declined 3.4% month over month in November, while real retail sales fell at an annualized rate of 7.8%. Throughout most of 2022, consumer spending growth has held up remarkably well, considering the degree to which sentiment has plummeted amid persistently high inflation. However, category-level trends suggest pockets of support may be growing scarce. While services spending continues to expand for certain categories, Morning Consult’s data showed diminished momentum for discretionary services, such as travel, that benefited from this summer’s pandemic-driven rebound. Spending on durable goods like autos also slipped lower in November after contributing positively to personal consumption expenditures during the previous month. 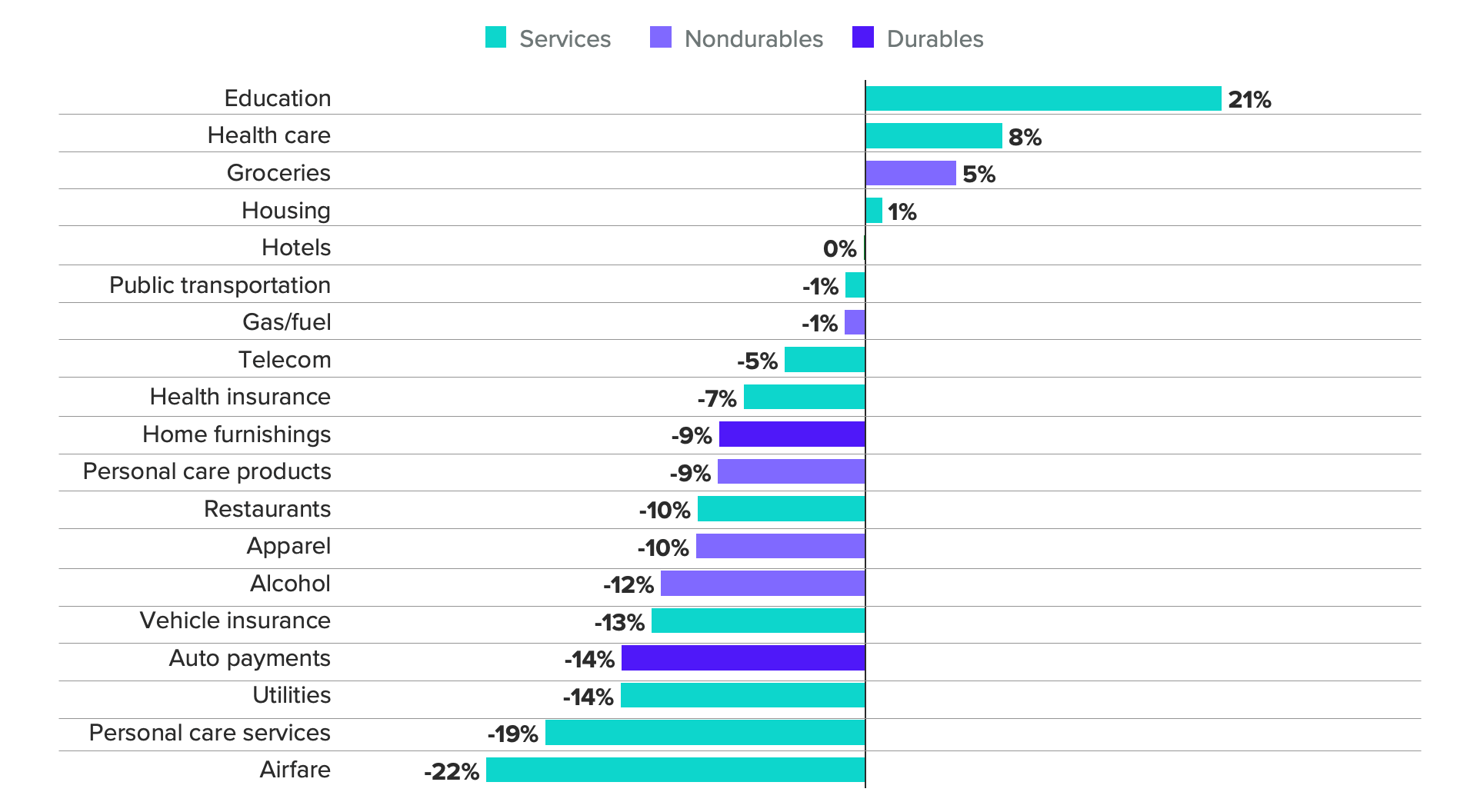 Monthly core inflation eased again in November, and Morning Consult’s data suggests further price relief may lie ahead. For a second consecutive month, monthly core inflation grew less than expected, climbing 0.2% in November. Looking ahead, the Cleveland Fed’s nowcast expects core inflation growth to pick up again over the next month. Morning Consult’s 5 Supply Chain Indexes of Consumer Inflation Pressures have registered a strong leading relationship with core inflation so far this year. Based on this precedent, Morning Consult’s implied forecast for December suggests downside risk to this prediction. The behaviors tracked by the indexes are intuitive indicators of subsequent inflationary movements: For example, diminished buying appetite as measured by the demand-related indexes puts pressure on sellers to lower prices, and supply disruptions reported by consumers help provide an indication of inventory levels with implication for price-setting as well. 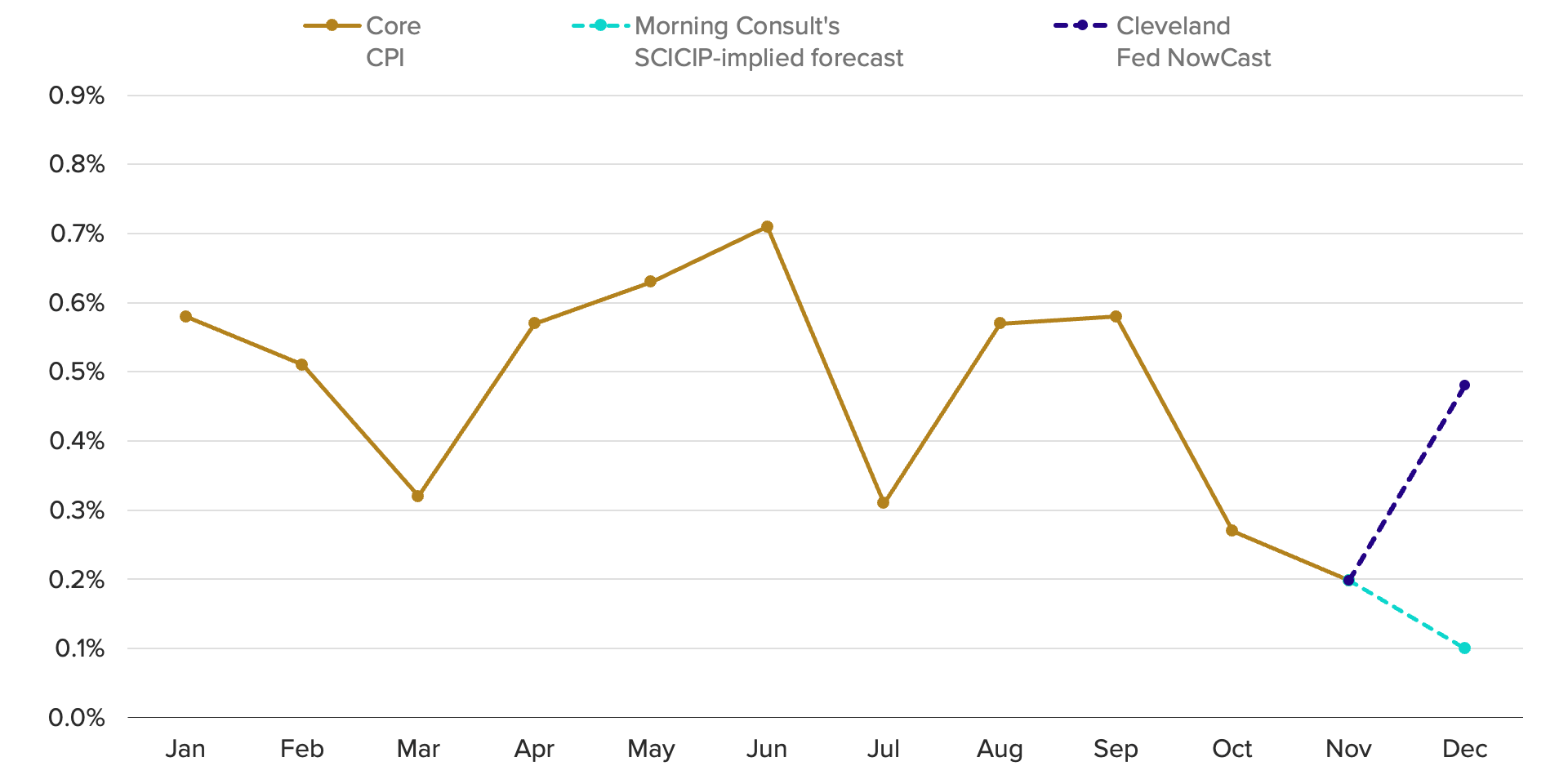 If inflation relief is indeed around the corner, it will be arriving not a moment too soon — especially from the perspective of those in lower-income households, who have disproportionately felt the sting of rising prices this year. The delicate balancing act of reconciling spending, inflation and incomes continued for U.S. household finances in November, with savings and debt slowly but steadily playing a larger role in financing purchases. Credit utilization has yet to climb past its pre-pandemic level, but the trend over the past year has been firmly upward. Savings drawdowns have been more pronounced, with the savings rate falling well below its long-term trend.

Differences in margins between incomes and expenses are a major differentiator across income groups, with savings shortfalls among lower-income households much more pronounced than at the higher end of the earnings spectrum. The highest-income households appear less affected by the bite of inflation, helping to explain some of the resilience observed in top-line spending measures to date. The finite nature of savings, however, suggests that even for this group, insulation against inflation may eventually run out without a meaningful shift in current dynamics. 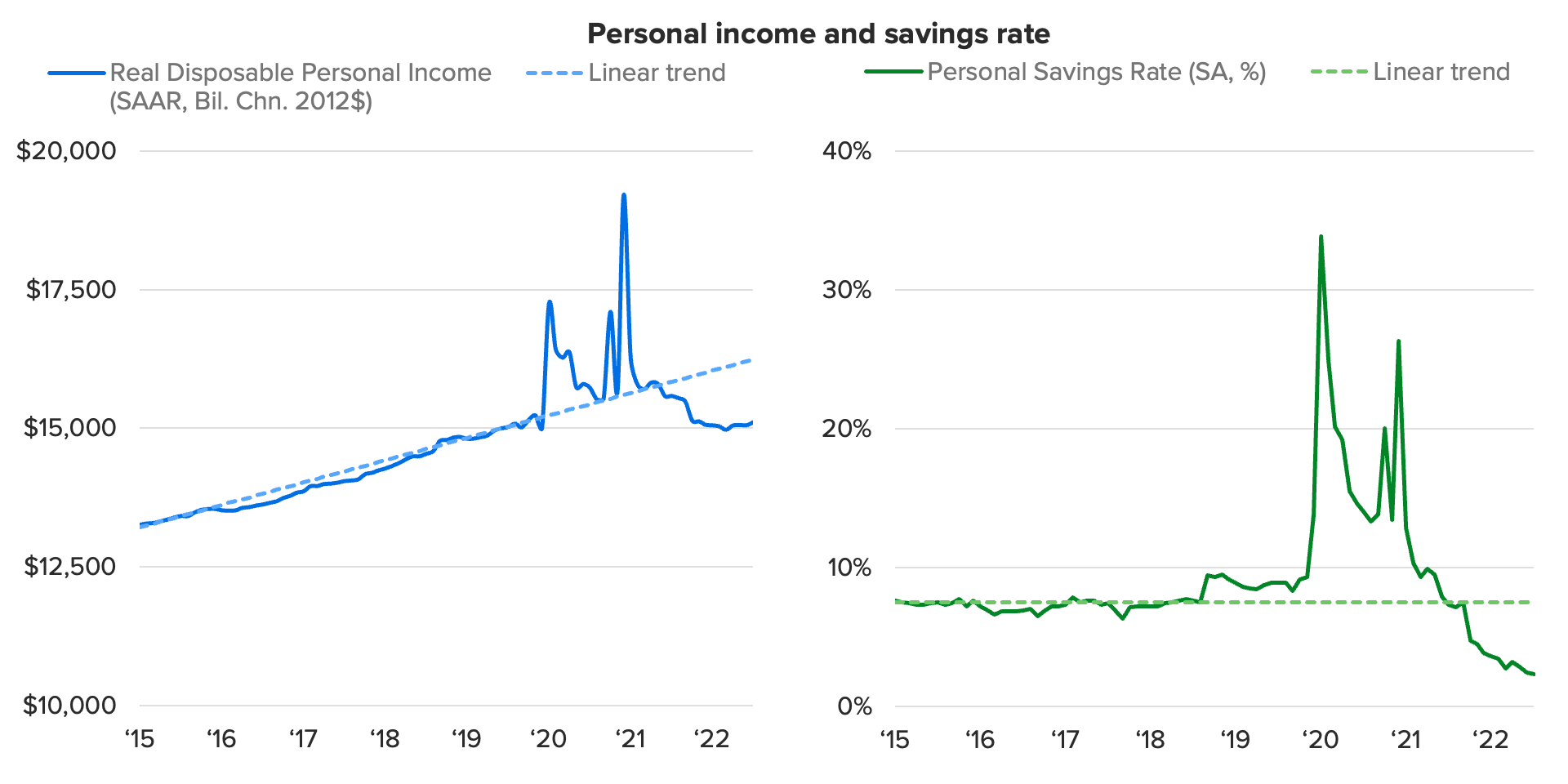 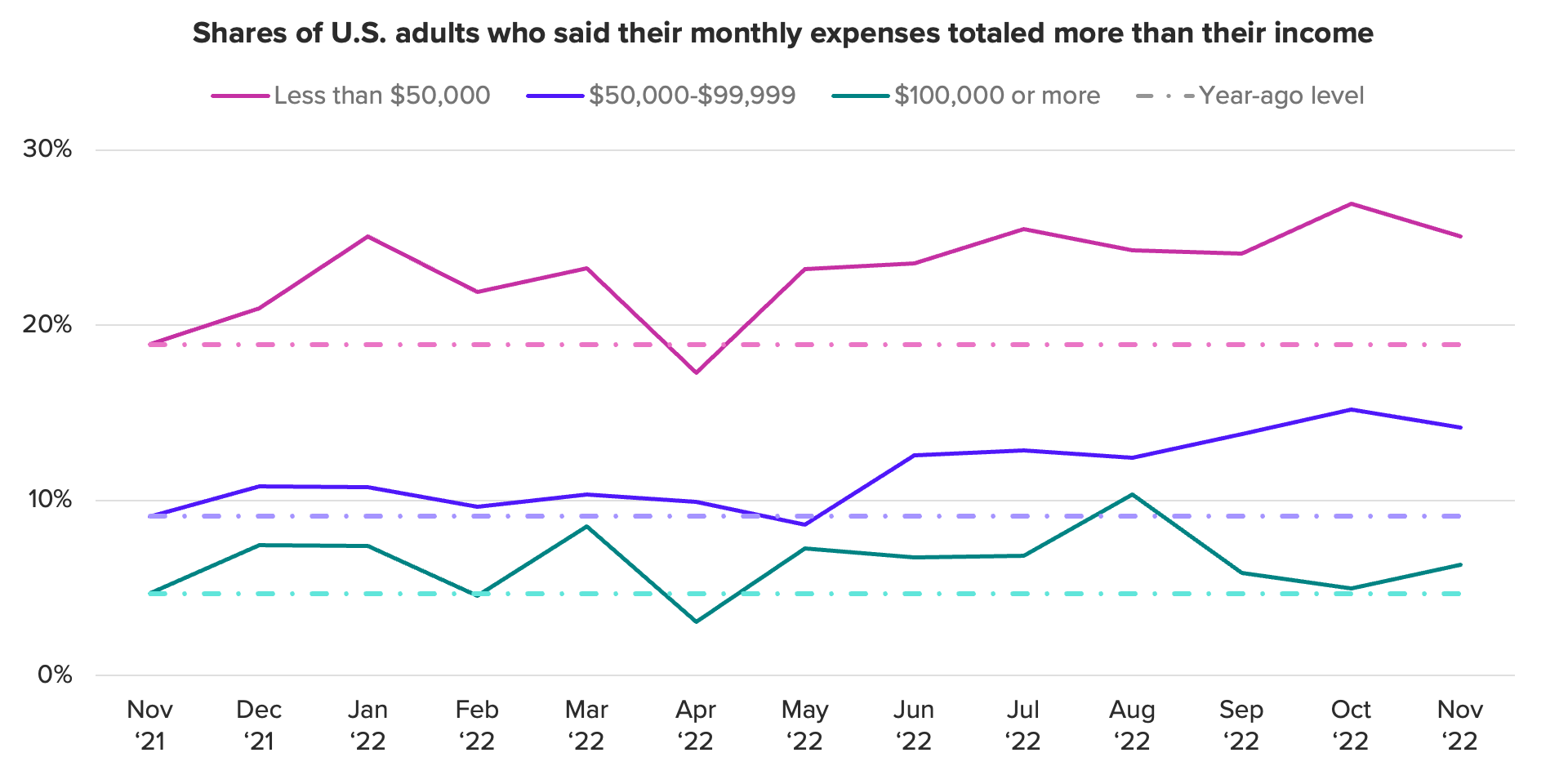