Predictions, Storylines and Everything Else the Sports Industry Is Watching in 2023

Sports executives weigh in on top-of-mind topics, from the potential of the Apple-MLS pact to the future of regional sports networks and more 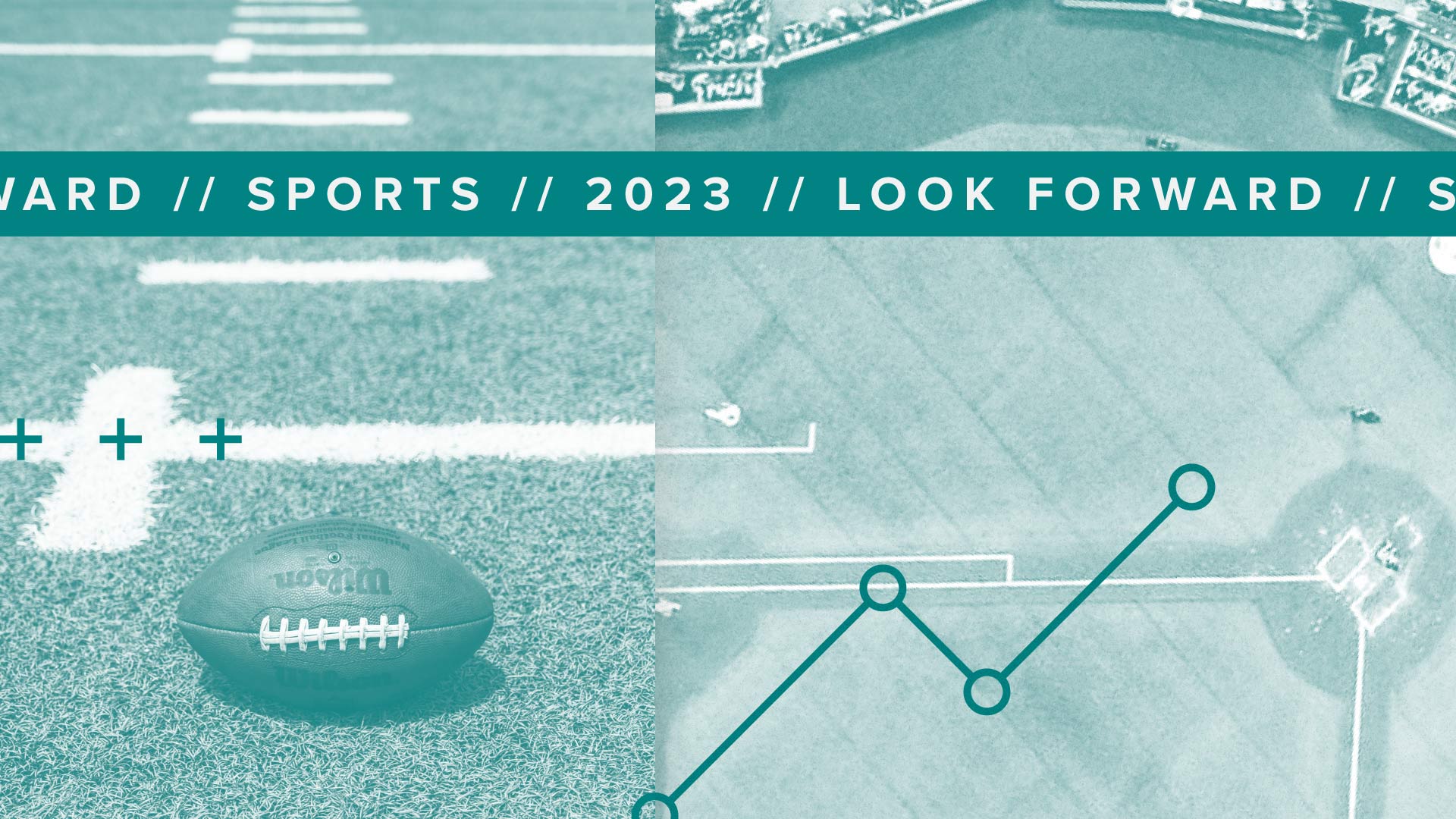 Morning Consult touched base with dozens of sports business executives to find out the hot-button issues and predictions they’ll be watching in 2023. (Unsplash / Morning Consult artwork by Nick Fabiani)
By Mark J. Burns

The past 12 months in the sports industry won’t be forgotten anytime soon.

The full return of live sports amid a global pandemic. Both an Olympics and World Cup held during cold-weather months. A controversial Saudi-backed rival to the PGA Tour. Brittney Griner’s release from a Russian prison. Not to mention there are now more than half a dozen sports teams up for sale — including MLB’s Los Angeles Angels and the NHL’s Ottawa Senators.

In an industry that never stops to catch its collective breath, it’s not too early to ask: What does 2023 have in store?

Morning Consult touched base with more than three dozen sports business executives via email to find out the storylines, hot-button issues and predictions they’ll be watching next year.

The further globalization of sport

The influx of sovereign wealth to major U.S. professional sports, and its impact on team investments, is one of the more popular storylines sports executives, lawyers and bankers are following heading into 2023.

“The world of sports is getting smaller,” Keenan said.

Between name, image and likeness regulations, conference realignment and College Football Playoff expansion, the landscape of college sports will continue to shift in 2023.

“Congressional involvement as the NCAA and conferences navigate ongoing litigation and address the need for federal legislation will remain front and center,” said Dr. Jim Phillips, commissioner of the ACC.

The new year will bring a new NCAA president in Massachusetts Gov. Charlie Baker, the 66-year-old Republican hired to replace Mark Emmert following his 12-year run. Next year will also mark the first season of the Big Ten’s seven-year media rights deal with Fox Corp., NBC Sports Group and CBS, which is reportedly worth between $7 billion and $8 billion.

“It’s going to be fascinating to see how viewing shifts in 2023 with a prime-time Big Ten game on NBC each week,” said Michael Mulvihill, Fox Sports executive vice president and head of strategy and analytics. “Whatever changes we see in 2023 will be a precursor to what promises to be an even more seismic year in 2024.”

What happens to regional sports networks?

Bally Sports parent company Diamond Sports Group has reportedly been linked to a possible buyout by the NBA, MLB and NHL, and the future of the group’s regional sports networks could play out in a number of different ways.

“Do they get sold off to creditors?” said William Mao, senior vice president of global media rights consulting at Interpublic Group of Cos. Inc.’s Octagon. “Will Diamond Sports Group file for bankruptcy? Will the leagues take them over, or perhaps a tech company? Does the direct-to-consumer offering get to scale?”

“Will they survive? Absolutely,” Calacci said. “But the mounting financial pressure on the rights fees paid will not subside and the repercussions across team valuations are imminent.”

There was consensus among executives for which technology behemoth would become the breakout sports media rights star of 2023: Apple Inc.

Charles “Chuck” Baker, partner and co-chair of Sidley Austin LLP’s entertainment, sports and media industry group, said Apple’s expansion into live sports — including its reported seven-year deal with MLB for exclusive rights to some Friday night games and its 10-year pact with MLS beginning in 2023 — “has transformed its platform entirely.”

“Having MLS on Apple has the potential to truly change the league and the way we as a country view the sport of soccer,” Baker said.

The soccer league, which is entering its 28th season, will look to ride any momentum created by the men’s national team’s performance at the World Cup. In a November survey conducted by Morning Consult, MLS ranked below the NHL, NASCAR, the PGA Tour and UFC in terms of fandom among U.S. adults.

Golden State Warriors President and Chief Operating Officer Brandon Schneider predicted the tie-up “will likely be a game changer” for MLS, given Apple’s “reach and innovation.” Enhancements to MLS’ on-air presentation could lead to “substantive changes in redefining sports content for a new audience of consumers,” including younger fans, said Elizabeth Lindsey, president of brands and properties at sports talent agency Wasserman.

Said Overtime’s Calacci: “Could Apple be the reason why Gen Z starts to re-engage with live sports?”

And now, it wouldn’t be a look ahead without some predictions.

Justin Toman, PepsiCo Inc.’s head of sports marketing, said the NBA “will jump into a new streaming partnership,” though he didn’t specify a company, while Octagon’s Mao predicted that the Pac-12 Networks “will be sunset by the conference as part of its next media deal.”

Ted Leonsis, chairman and chief executive of Monumental Sports & Entertainment, parent organization of the NBA’s Washington Wizards and NHL’s Capitals, said “a significant number of teams will go public in 2023.”

How about NFL global expansion? Tyson Webber, president of sponsorship and experiential agency GMR Marketing, predicted the league will announce two new European-based franchises to begin play in 2025, “along with the tentative commitment of a Super Bowl in one of the locations no later than the 2028 season.”

Overtime’s Calacci said LIV Golf and the PGA Tour “will reach an accord and learn to co-exist on the world stage.”

And, for some, the future is truly here now — in the form of generative artificial intelligence, though how it intersects with sports business remains to be seen.

Dallas Mavericks owner Mark Cuban is at least one influential figure banking on the technology altering how sports teams market themselves and handle customer service, as a couple examples. OpenAI’s ChatGPT — which The New York Times described as “the best artificial intelligence chatbot ever released to the general public” — and other AI programs “are going to begin to change not just sports but all of business,” Cuban said.