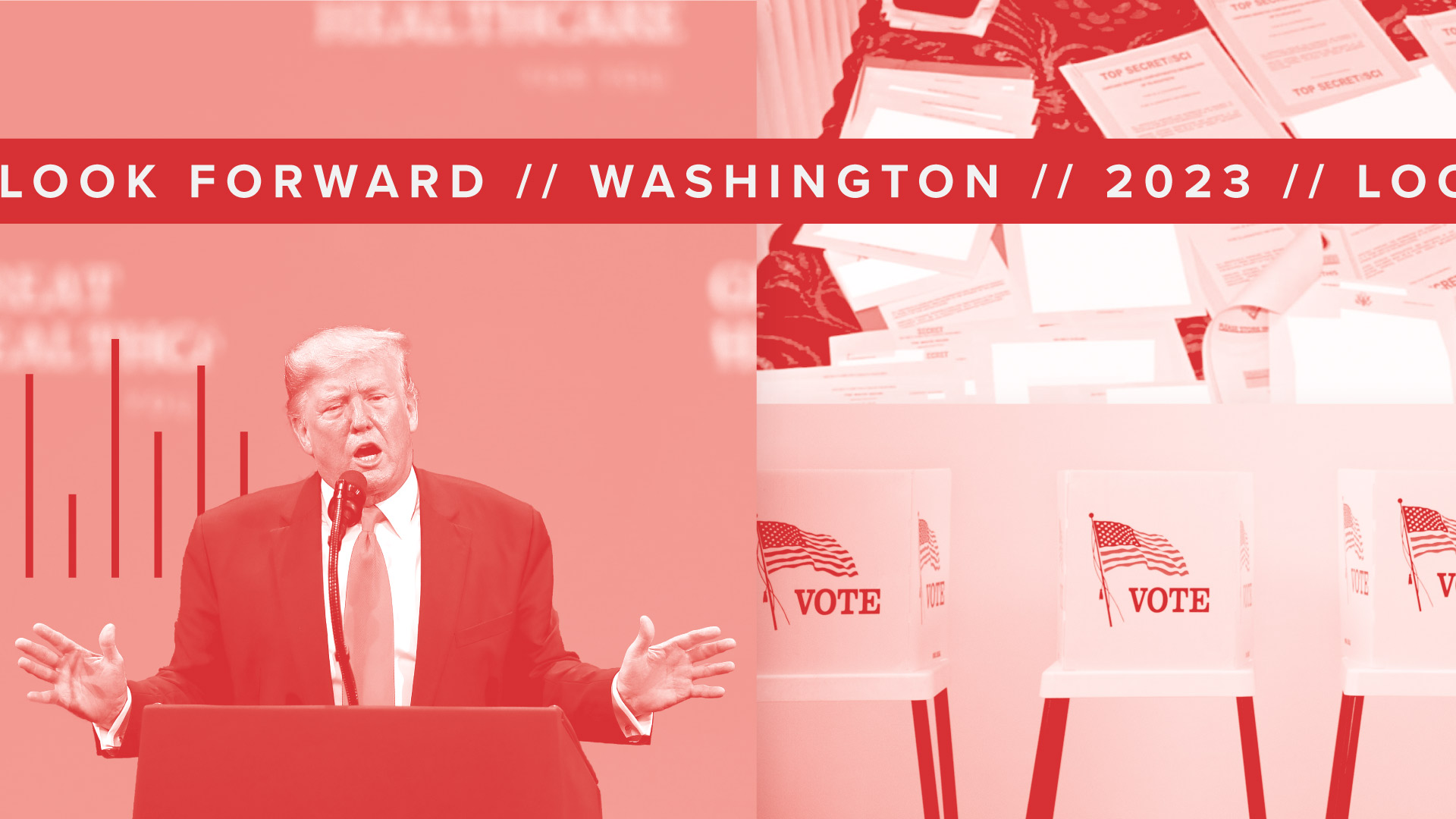 After tiptoeing around the issue for two years, 2023 will force Republicans to reckon with a major question as they begin their 2024 presidential nominating process: What to do about former President Donald Trump, a man whose continued impolitic actions, attacks on elections and mere presence on the stage have been cast as a drag on the GOP’s prospects for future victories.

Just over a year from the first Republican presidential nominating contests, any effort to dethrone Trump looks daunting — especially if several known aspirants join the contest. But a new Morning Consult survey shows a two-horse race could see him as the loser, setting up a complicated high-stakes battle over the next 13 months.

“Do Republicans have a choice? I believe they do,” said Republican strategist Michael Biundo, who advised Trump’s 2016 campaign. “If they don’t have too many options, you could see a new people’s champion leading the ticket in 2024.”

Morning Consult’s tracking among potential Republican primary voters shows Trump dominant in a wide field against the likes of Florida Gov. Ron DeSantis, former Vice President Mike Pence and a host of other prospects, such as former South Carolina Gov. Nikki Haley and former Secretary of State Mike Pompeo. But pitted directly against DeSantis, the No. 2 in a large theoretical primary field, it’s a different story.

Political Intelligence
DeSantis Is Competitive Against Trump in Two-Candidate Field
Shares of potential Republican primary voters who would vote for the following if a primary election or caucus was held in their state today: 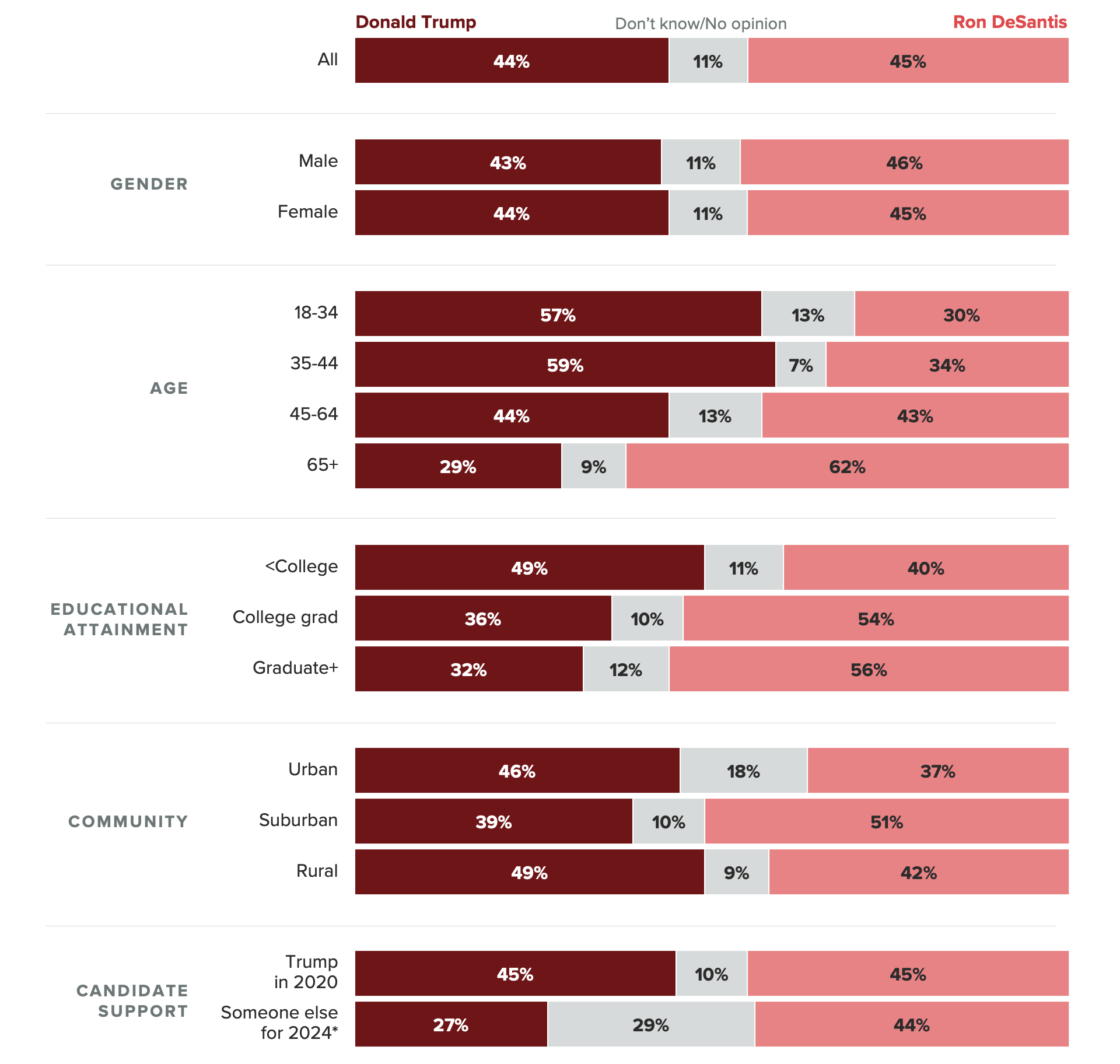 *These voters opted for a candidate besides Trump or DeSantis in a field that included 11 other named candidates and a “Someone else” option.
Survey conducted Dec. 10-14, 2022, among 825 potential Republican primary voters, with an unweighted margin of error of +/-4 percentage points.

According to the Dec. 10-14 survey, DeSantis leads Trump, 45% to 44%, in a hypothetical head-to-head primary matchup, with another 11% undecided. The governor of a state with one of the highest percentages of residents older than 65 gets his strongest backing from America’s oldest voters, a core GOP constituency, along with majority support among Christians and — most notably given the party’s recent losses — suburbanites.

Trump is strongest among the potential Republican primary voters with the lowest levels of educational attainment, a constant throughout his time on the political stage, while the two Republican candidates are polling even among base voters who backed Trump in 2020.

From his perch in New Hampshire, Biundo sees holes in the former president’s “America First” armor, creating an opening for a Republican challenger who is a “true champion that comes to the fight” minus all of Trump’s baggage. He said a successful Trump challenger will be a “fighter, even if they are growing weary of the fight.”

Trump’s campaign didn’t respond to a request for comment for this article.

How Republicans may try to damage Trump

Up until this point, the kind of fight leading Republican figures have been willing to bring against Trump publicly has been largely muted, and reactive.

“When they had the opportunity to take actions that would have placed him outside the sphere of American politics or life — convicting him after Jan. 6 — they didn’t take the opportunity,” said anti-Trump political strategist Reed Galen. “Every time they have the opportunity to speak out, they walk right up to the line, they say there’s no place for that, but how many of them who weren’t McConnell-aligned Republican senators who probably aren’t up for re-election call him out by name? Very few.”

Such attacks on Trump did move the needle with the Republican electorate after the Jan. 6 Capitol attack, but that blowback wore off when their voices faded. And more recently, the FBI’s raid of Trump’s Mar-a-Lago home in search of documents taken from the White House appeared to actually boost Trump’s standing a bit with GOP voters, showing the limits of potential attack lines and underlying the wariness of some to go after him.

“It’s fair to criticize him, it’s fair to call him out when need be and then ignore him when you’ve already said what you’ve got to say,” said Scott Jennings, a Republican strategist in the orbit of Senate Minority Leader Mitch McConnell (R-Ky.) who has been critical of the former president. “When they hear constant criticism of him,” Jennings said of the Republican electorate, “it’s almost like they take it personally and feel their nose is being rubbed in it.”

After the GOP’s underperformance in the 2022 midterm elections, a number of Republican voices did point the finger at Trump, who either elevated poor candidates or pressured others to embrace his false narrative about 2020 losses, both of which contributed to smaller-than-expected gains in the House and a failure to retake the Senate. When it was reported last month that Trump sat for a Mar-a-Lago dinner with white supremacist Nick Fuentes and antisemite Ye, formerly known as Kanye West, there was a familiar round of wrist-slapping. Another followed when he posted on his social media app a call to “terminate” constitutional rules to reinstate him in the White House.

Neither incident did much to move Trump’s numbers among the GOP’s primary electorate, though it did appear to cause Republican voters to change their tune about how much of a role he should play in the party.

Surveys conducted in 2022 among at least 639 Republican voters, with unweighted margins of error of +/-4 percentage points.

Despite Trump’s standing in the polls and high favorability rating, Jennings said he thinks many in his party are ready to move on from Trump — something Morning Consult surveys suggest may be true: The share of Republican voters who said Trump should play a major role in the GOP has dropped 19 percentage points since the midterms. But Jennings said the sensitive maneuvering to get there must be led over the next several months by presidential candidates rather than others such as GOP lawmakers who have often borne the brunt of press scrutiny regarding Trump’s behavior for more than six years.

“The ultimate case isn’t going to be made by elected officials in Washington, D.C. At some point Ron DeSantis is going to say ‘I got COVID right and he got it wrong,’ or Chris Christie is going to say ‘this guy got beat by Joe Biden,’” he said. “Most Republicans know if we go around this track one more time, we’re going to lose one more time. Even if they say ‘I love everything about the guy, I love his policies, I think he was unfairly treated,’ in their heart they know if we do this again, we’re going to lose again.”

Galen, a co-founder of the Lincoln Project, said to defeat Trump, powerful Republican voices and potential Trump primary challengers must unite against him — and do so with brutal vigor akin to the Lincoln Project’s approach in 2020 — in order to pull off an upset.

“The only way is if they were all in now and they were all attacking him relentlessly from dawn until dusk every day and just creating this wave,” he said. Galen is skeptical that will happen, given the egos at play and that “so much of the party’s base agrees with all this stuff and believes in it.”

In terms of early viability, only DeSantis scores higher than 10% support in the multi-candidate field — and it’s not simply a function of name recognition. For example, Texas Sen. Ted Cruz, a fixture on the campaign trail for Republican candidates, is known by roughly 4 in 5 potential GOP primary voters but is backed by just 3% in a survey that asked about 11 candidates.

Cruz has a similar level of support among the party’s potential national electorate as Haley and Pompeo, lesser-known figures who have made no secret of their interest in 2024 campaigns.

Taken together, the non-Trump vote adds up, leaving it up to candidates and indeed Trump-wary donors to decide whom to elevate. It’s not an easy task, and self-interest among a relatively young crop of potential Trump challengers could derail any effort to consolidate against Trump.

“Fragmentation protects Trump,” Jennings said, raising concerns about a wide-open field. “Conversations have to take place — and candidates will have to lead it — and when we start voting in 13 months, this field ought to be whittled down and the people not viable should have some common sense.”

Whether a Trump campaign makes it through 2023 is an unknown facing the GOP given his potential for criminal prosecution and a meager and uncharacteristically quiet rollout void of major rallies or even endorsements from the swath of candidates he backed this year.

Galen, made semi-famous for his group’s viral Trump attacks in 2020, suspects Trump will be the Republican nominee come 2024, in part because of the fear of crossing him. If Trump is not the nominee, Galen said the past suggests Republicans should worry Trump might just try to take down the GOP with him.

“If somehow they do beat him, he’ll make sure they’re never president,” he said.