The GOP Is Gearing Up for Battle Against ESG in 2023. Most Investors Support Companies’ Focus on Those Principles 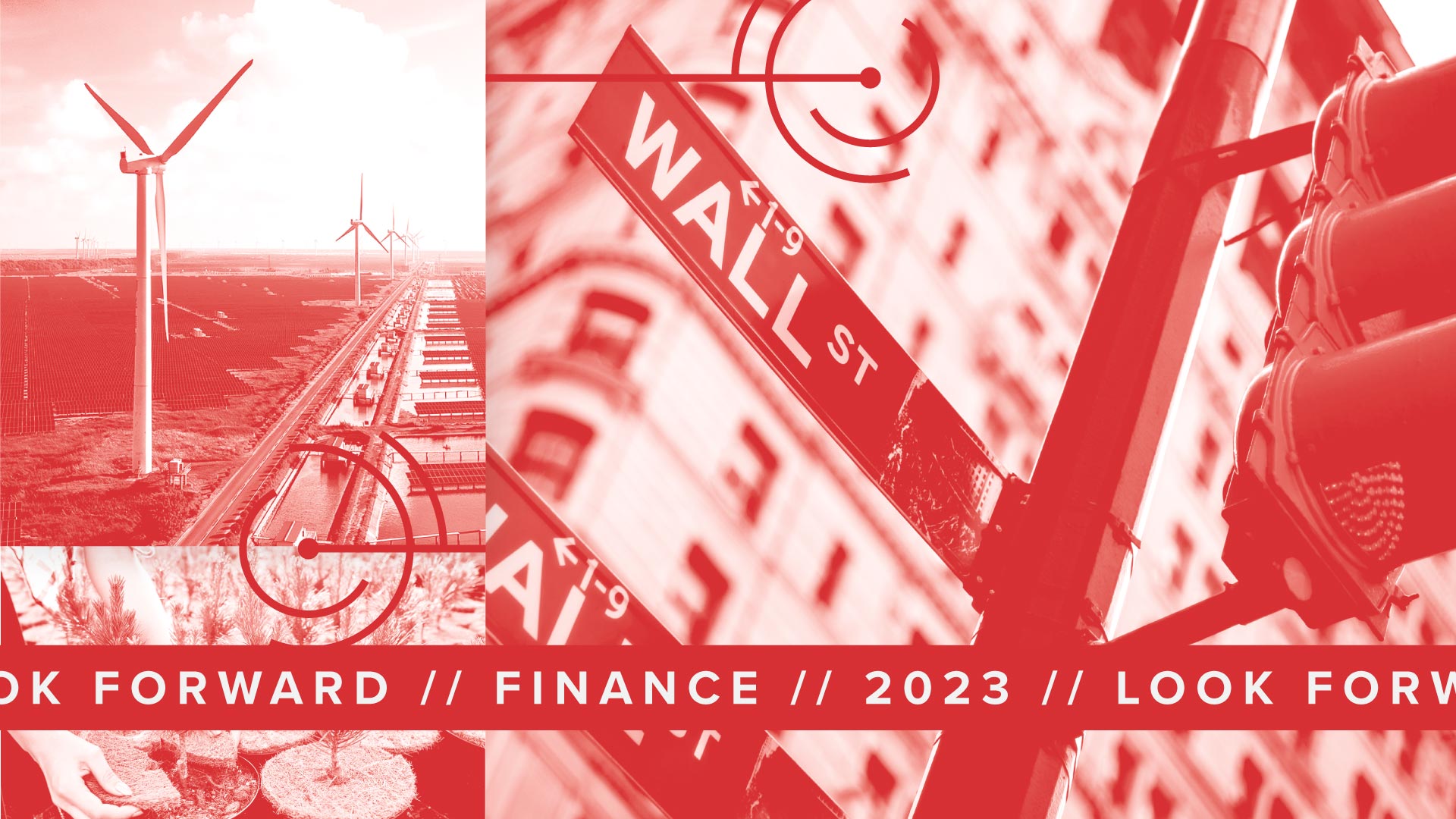 As the chorus against environmental, social and governance investing principles grows louder, a new Morning Consult survey finds that those views may not square with investors’ feelings on just how much of a role ESG principles and company involvement in social issues should play in the investment arena.

But if conservatives have their say next year, that role will be significantly reduced.

In a report outlining their strategy, Republicans on the Senate Banking Committee decried the ability of the big-three investment funds — BlackRock Inc., State Street Corp. and Vanguard Group Inc. — to use their “voting power gained from their investors’ money to advance liberal social goals known as ESG (environmental, social, and governance) and DEI (diversity, equity, and inclusion).” And for their part, Republican state regulators have already begun their charge, using their own financial heft to pull state retirement dollars out of funds where they disagree with the firms’ direction.

Whether or not firms are using their investment power to prod companies into making ESG-aware business decisions, Morning Consult data shows that while less than half of the general public is OK with investment firms’ support for ESG principles, those who report being frequent investors are more likely to value ESG investing.

Respondents were asked if they think that investment firms should support environmental, social and governance investing principles

Republicans make an example out of BlackRock, Vanguard

In 2022, BlackRock and Vanguard became the symbols of “woke” investing for conservatives, but the two firms diverged in their response to public pressure.

BlackRock Chief Executive Larry Fink has remained steadfast in his public support for ESG on the grounds that it’s a good investment decision. In his 2022 letter to investors, Fink wrote that “the next 1,000 unicorns won’t be search engines or social media companies, they’ll be sustainable, scalable innovators.”

On the other hand, Vanguard, in a move to publicly assert its independence, announced in early December that it would leave the Net Zero Asset Managers initiative, a group of 291 funds with a stated commitment to reaching net-zero emissions by 2050.

Vanguard still offers a portfolio of ESG investing options, however. A spokesperson said in a statement to Morning Consult that “as the only investor-owned asset manager, Vanguard is singularly focused on giving clients the best chance for investment success. We look forward to continuing constructive dialogue with policymakers about our consistent approach to maximizing long-term shareholder value.”

Vanguard’s disavowal may have won it the brownie points it needed to avoid conservative ire; the firm was excused from having to attend a grilling by the Texas Senate State Affairs Committee, which questioned investment fund executives about how their focus on ESG might impact state pension plans. The Texas regulators brought in representatives from BlackRock, State Street and Institutional Shareholder Services Inc. to press them on whether a focus on ESG investing was costing shareholders profits, a question posed by politicians and investors alike.

Frequent investors were more likely than the general public to say that companies’ involvement in ESG investing was “just right.” Additionally, 46% of adults who frequently invest said they believe that funds’ prioritization of ESG-related risks or opportunities in investing is a financially safe move, while 32% thought it is a financially risky practice and 21% weren’t sure.

Respondents were asked if they believe investment firms place too much, too little or just the right amount of importance on ESG investing principles

Clashes over climate won’t be limited to the realm of fund managers.

In March, the Securities and Exchange Commission proposed new rules that would not only standardize the reporting of climate-related risks, but require independent verification. The rules were subject to a public comment period that ended in June, and with less than a week before the New Year, it seems companies won’t see a final rule adopted until 2023.

Anthony Holder, an associate professor of accounting at the University of Denver who studies how companies account for their ESG activities, noted that the SEC has received thousands of comment letters on the proposed rules. Holder and his students have begun analyzing the contents of those comments, and he said that for the most part, the letters are supportive of disclosures, though some companies that operate outside of the United States expressed concern that they could be put at a competitive disadvantage.

Morning Consult data finds that frequent investors mostly support increased climate and environmental risk disclosure: 69% said the U.S. government should require companies to tell investors about any risks that climate change might present to the company’s business, including the company’s greenhouse gas emissions, while 22% said it shouldn’t and 9% didn’t know or had no opinion. Among all adults, 66% said yes, 18% said no and 16% weren’t sure.

Holder noted that among the general public, the share saying they weren’t sure is a “pretty large group of people to be indifferent” and could indicate that additional education is needed to help people understand what the rules actually mean. Among the share who said the government shouldn’t require disclosures, he posited that they may have already been leaning in that direction in the first place, primed by successful messaging by conservatives.

Holder questioned why an investor wouldn’t want more information on climate risk: “I’m looking at it from an academic perspective. What’s the downside of hearing this?” he said. “If I’ve invested in a condo building in Miami, I would want to know how exposed they are, right? I don’t understand the situation where you don’t want to know.”

How the Public Feels About ESG Stances From Companies

Respondents were asked if companies should take public positions on the following when the issues aren’t relevant to the company’s primary business: 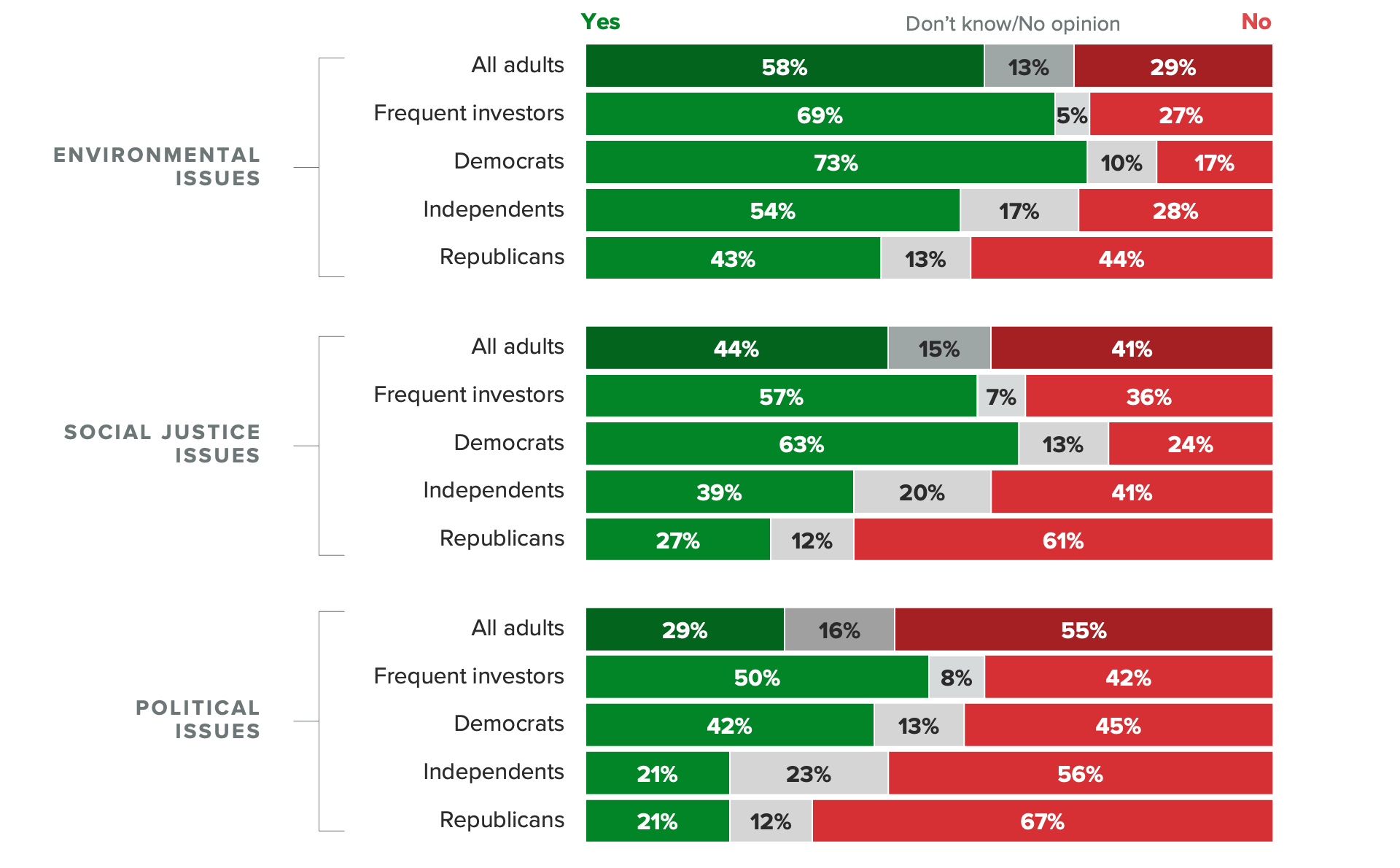 Public most likely to oppose companies’ stance on political issues

While politicians and regulators have made waves when it comes to environmental issues, particularly those that involve companies’ investments or involvement in fossil fuels, the GOP has its eye on companies’ social and political activities, as well. For instance, Walt Disney Co. — and Florida taxpayers — narrowly avoided a major regulatory shake-up over the company’s opposition to LGBTQ-related legislation in the state.

The Morning Consult survey found that the public supports companies’ involvement in environmental issues, though it is mixed on social justice issues. Meanwhile, more than half of adults said they oppose stances from companies on political issues, and among Republicans, that share was 67%. This may be good news to conservatives in 2023, as they embark on their fight to punish companies that have “gone woke.”

In the meantime, companies will continue to tiptoe through the minefield of political consternation around ESG and public opinion.