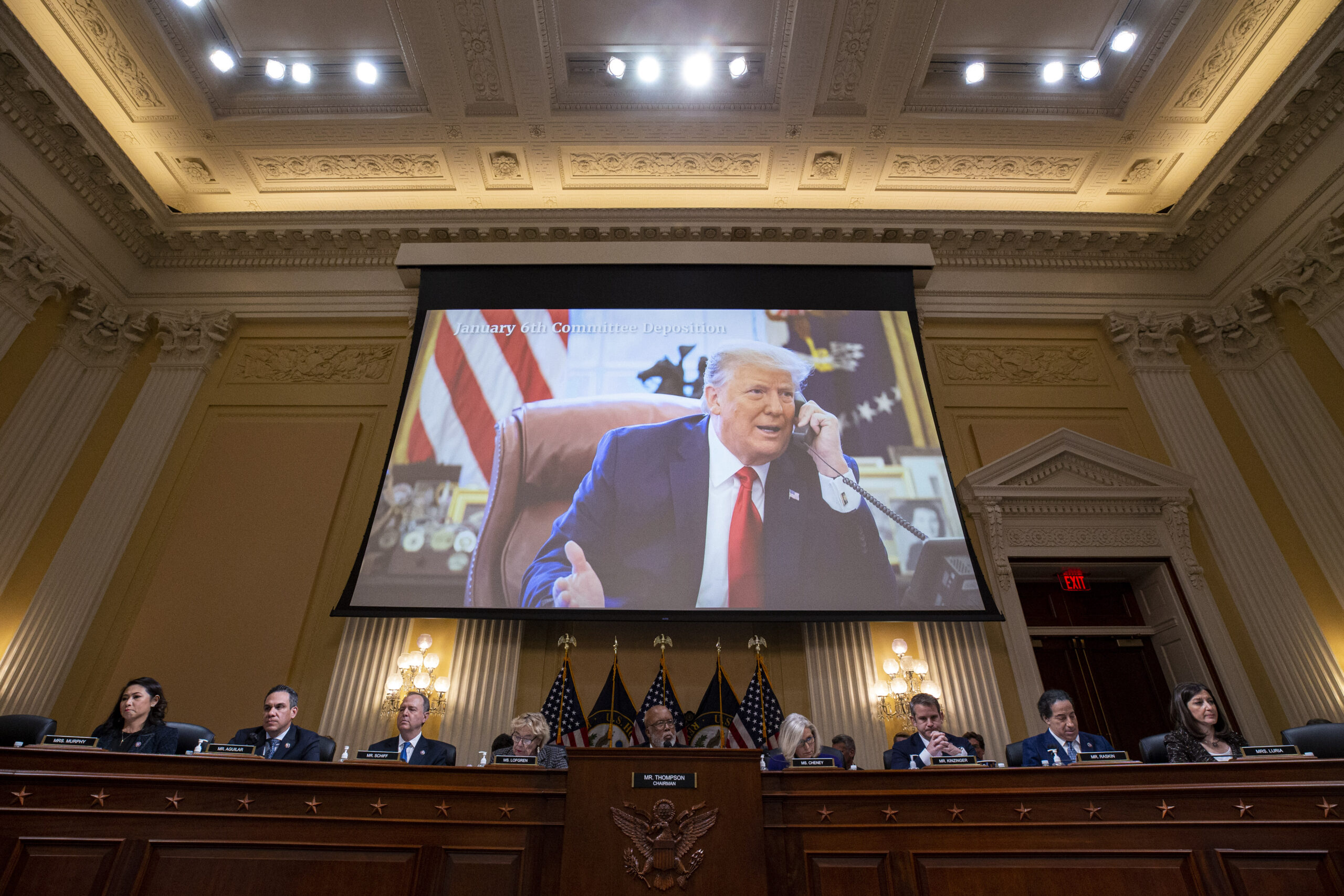 Little has changed over the past year regarding how the American electorate thinks about the Jan. 6 Capitol attack following the conclusion of the special House committee’s investigation: They blame former President Donald Trump and think he’s guilty of crimes.

With the next presidential campaign already underway in some form, a new Morning Consult/Politico survey suggests the issue could weigh on the Republican Party at least as much in 2024 as it did during the midterm elections, when Democrats were able to raise threats to democracy in their issue matrix.

In the latest survey, conducted just ahead of the second anniversary of the Trump-inspired mob’s assault on the Capitol, 55% of voters said the events of Jan. 6 will have at least a minor impact on their 2024 vote, similar to the share that said the same a year ago — before the GOP would go on to underperform expectations in November.

Voters were asked to what extent the events of Jan. 6, 2021, would have on their vote choice ahead of the 2022 midterm and 2024 presidential elections 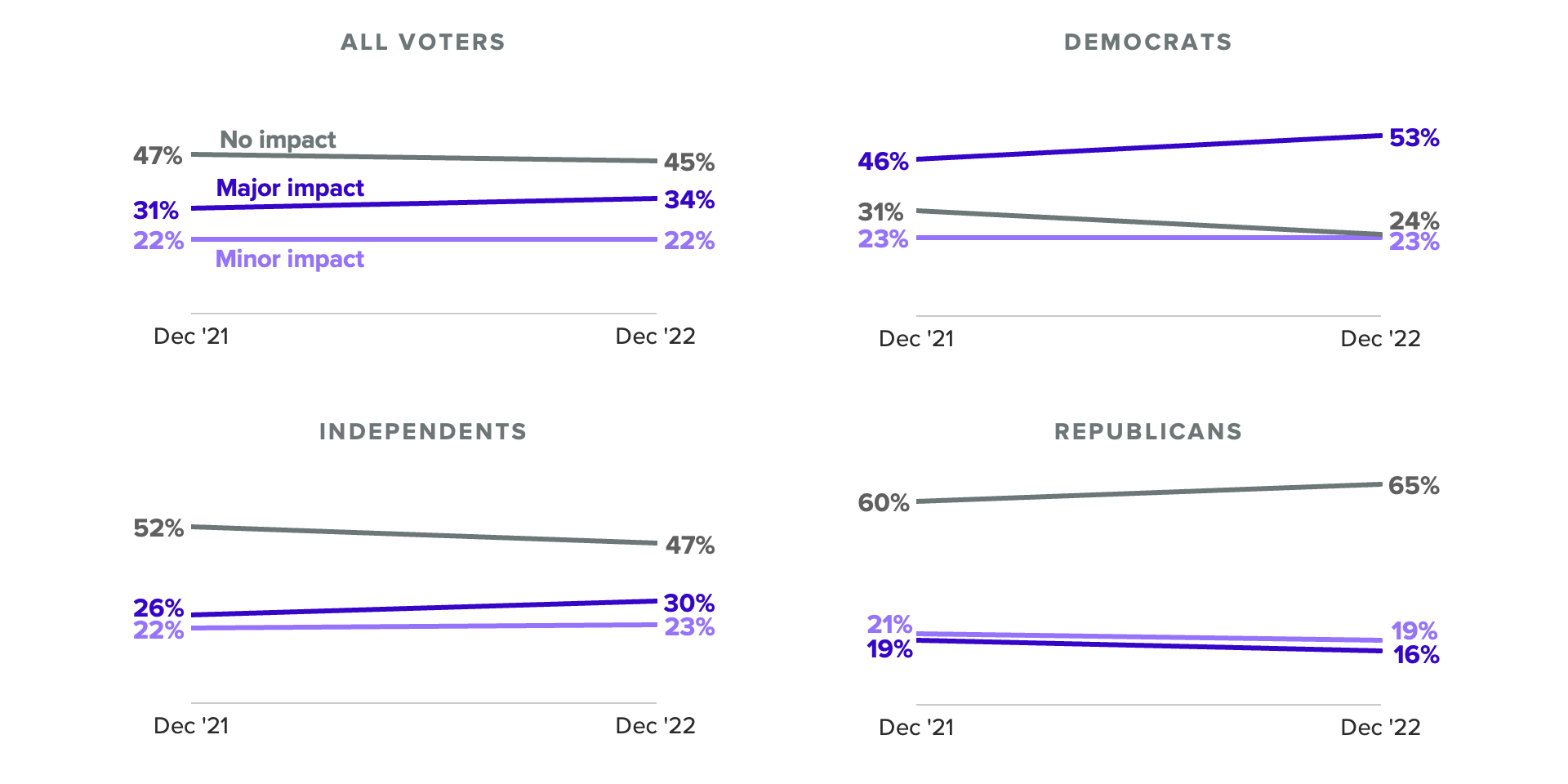 Roughly a third of voters (34%) said the Capitol attack will have a “major impact” on their vote next year, including 53% of Democrats and 30% of independents. Each of those figures is up slightly from the December 2021 survey, in contrast to a decline among Republican voters over that period.

The steadiness of sentiment, especially among independent voters, comes as the country — and the Republican Party — grapples with another White House bid by Trump, a highly divisive figure who has not strayed from his false claims of widespread voter fraud that preceded the deadly Capitol riot. It could be troubling for the GOP ahead of 2024, given the fact that Morning Consult surveys conducted amid the select committee’s hearings suggested the Jan. 6 issue weighed particularly heavily on the politically unaffiliated voters who ultimately helped fuel the GOP’s underperformance.

How voters see Trump’s role in the Jan. 6 attack

Over the past year, the House’s now-defunct Jan. 6 committee revealed new details about Trump’s behavior ahead of the insurrection. That included testimony that he was made aware by counsel and associates, including then-Attorney General William Barr, that his claims of widespread voter fraud were false, paired with salacious allegations about his interest in joining his supporters at the Capitol.

The committee’s report sought to prove Trump was culpable for the attack, adding evidence to something most voters have been inclined to believe all along.

Shares of voters who said former President Donald Trump and Republicans in Congress are “very” or “somewhat” responsible for the events that led to the Jan. 6 Capitol attack 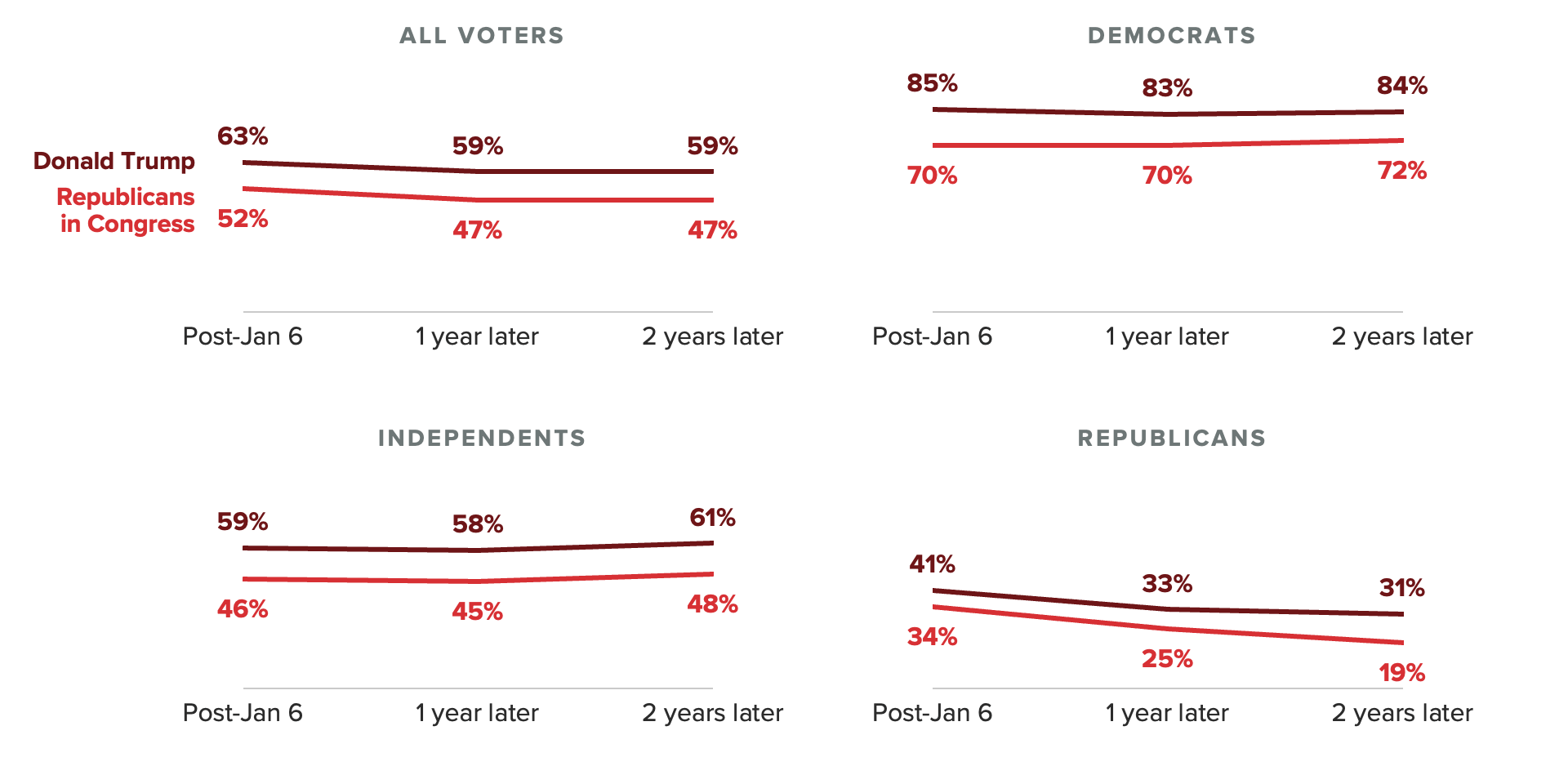 According to the latest survey, 59% of voters said Trump is “very” or “somewhat” responsible for the events that led to the Capitol attack as Congress met to certify President Joe Biden’s 2020 victory. It’s similar to the share who said the same a year ago and down only slightly from a survey conducted immediately after the attack.

Along with Trump, a large share of voters (47%) believe Republicans in Congress are at least somewhat to blame for Jan. 6. It’s identical to the percentage who agreed with the sentiment roughly a year before the midterms.

How voters view the Jan. 6 investigations

While House Republicans have indicated they will investigate the Jan. 6 investigators, the select committee ended its work on generally solid footing with voters.

Voters were asked whether they approve or disapprove of the special House committee investigating the Jan. 6 Capitol attack

Survey conducted Dec. 21-24, 2022, among a representative sample of 2,000 registered voters, with an unweighted margin of error of +/-2 percentage points.

Almost half of voters (47%) and a similar share of independents said they approve of the Jan. 6 committee’s work, similar to the panel’s standing a year ago, before lawmakers held major hearings or released details from their investigation.

Though the House’s probe has ended with the election of a small Republican House majority, about 2 in 3 voters — including 90% of Democrats and 59% of independents — said it is very or somewhat important for the federal government to continue to investigate the events of Jan. 6, virtually unchanged over the past year.

The results of the House’s probe were not a particularly salient news event, with just 25% of voters reporting that they had seen, read or heard a lot about it, ranking the development as impactful as news last year that former Trump adviser Steve Bannon was found guilty of contempt of Congress.

Still, voters were more likely, at 36%, to hear a lot about the committee’s recommendation that Trump be prosecuted by the Justice Department for inciting insurrection and other federal crimes. And on that issue, Trump may face his biggest difficulty as he seeks the White House again. 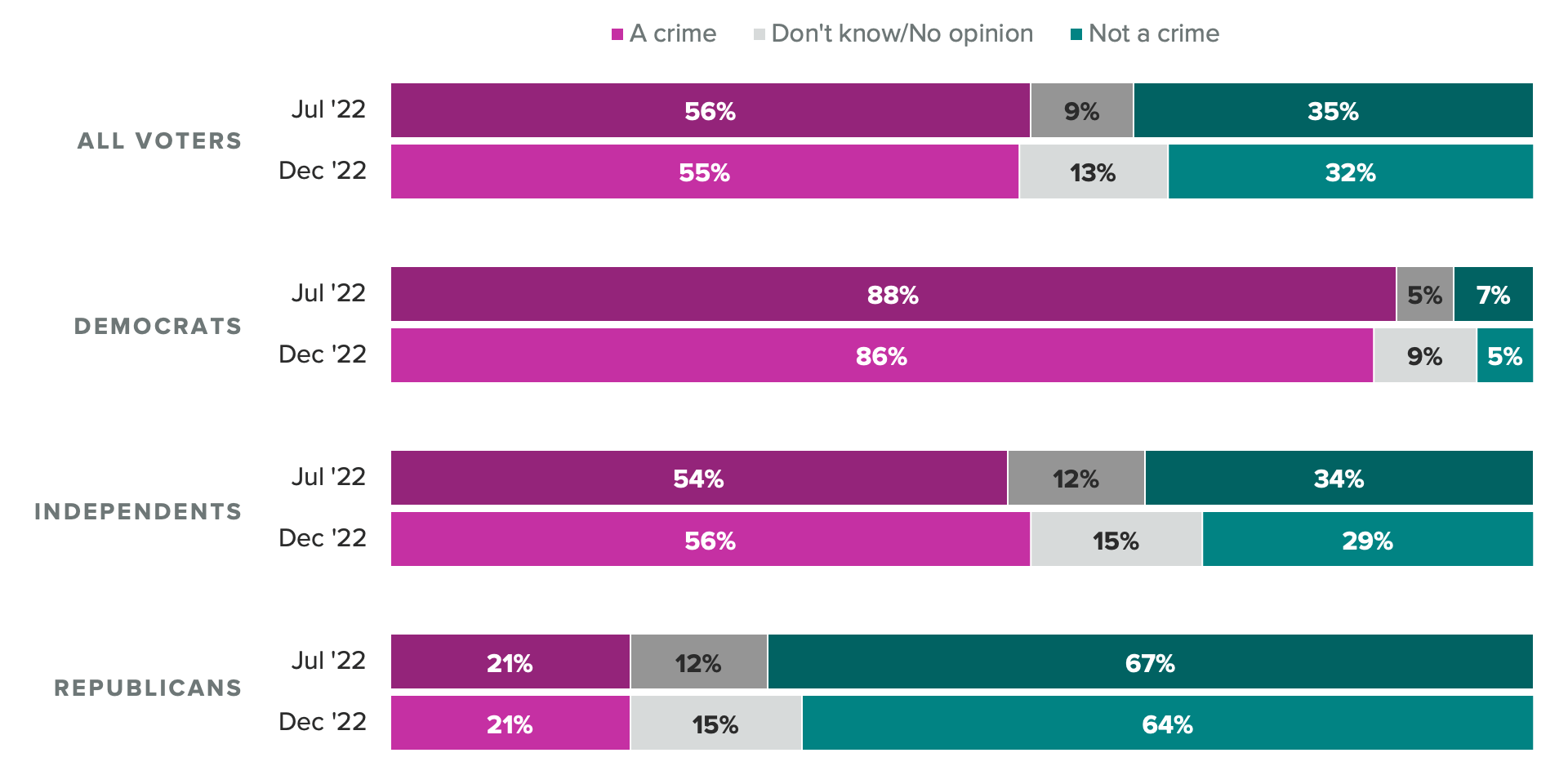 Survey conducted Dec. 21-24, 2022, among a representative sample of 2,000 registered voters, with an unweighted margin of error of +/-2 percentage points.

A majority of voters (55%) believe Trump’s attempts to overturn the results of the 2020 presidential election were criminal, including more than half of independent voters and 1 in 5 Republicans. The public’s belief appears to have little to do with the panel’s findings, given that the numbers are nearly identical to where they were in July before the report was released.

Roughly half of voters (47%) believe the former president and Republican presidential front-runner should be prosecuted for his behavior surrounding Jan. 6.