55% of voters disapprove of the president’s job performance, virtually unchanged since before the discovery of Obama-era materials was revealed 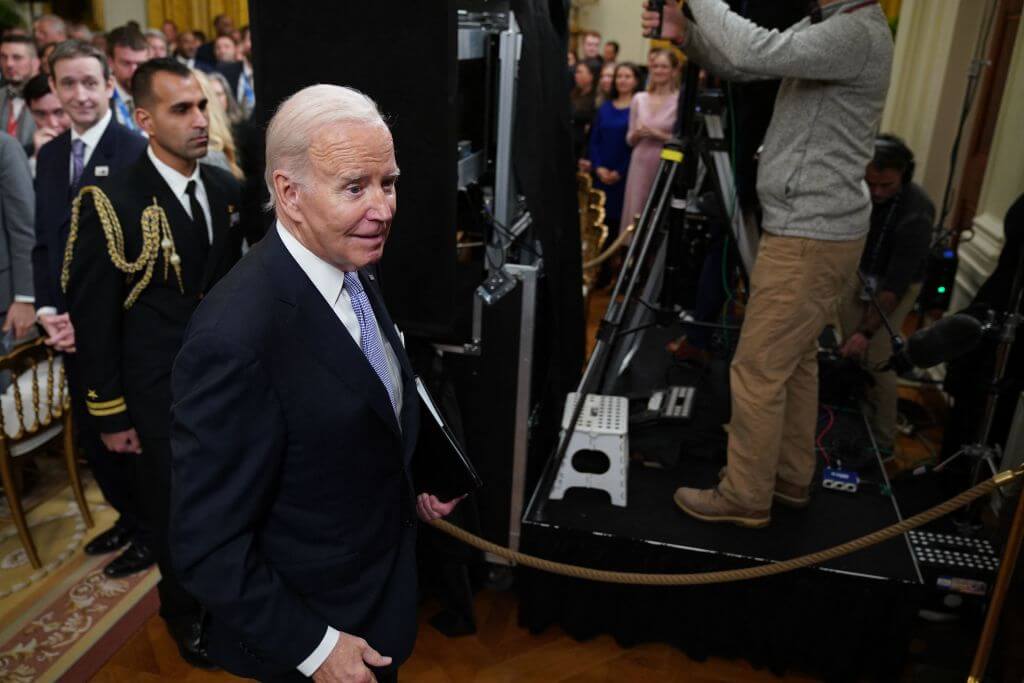 President Joe Biden departs after hosting a bipartisan group of mayors at the White House on Jan. 20. (MANDEL NGAN/AFP via Getty Images)
By Eli Yokley

Little has changed in how voters view President Joe Biden’s job performance following the discovery of classified materials from the Obama administration at his Delaware home and a former private capital office, per Morning Consult survey trends.

Shares of registered voters who approve or disapprove of President Joe Biden’s job performance, before and after the Jan. 9 revelation of Obama-era classified documents in his possession 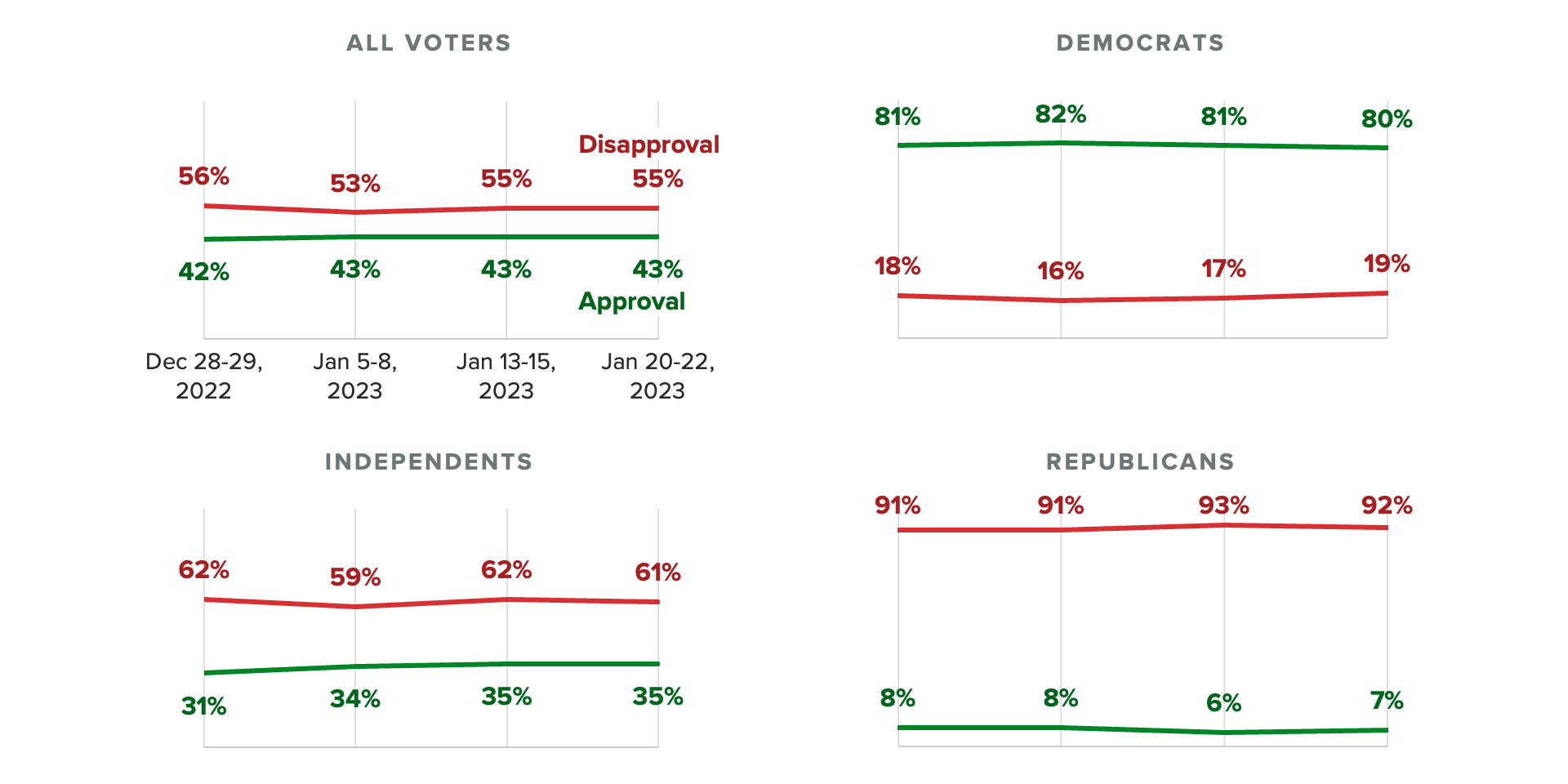 Surveys conducted among representative samples of roughly 2,000 registered voters each, with unweighted margins of error of +/-2 percentage points. “Don’t know/No opinion” responses are not shown.

How resonance of Biden’s probe compares with Trump’s

The discovery of classified documents at the Penn Biden Center for Diplomacy and Global Engagement in Washington, D.C., coupled with the slow drip of information about materials found at Biden’s Wilmington, Del., home has not damaged the president’s standing, which has recently improved marginally at the state level. But it has become a major headache for the president as he prepares to launch his re-election bid.

Republicans, already eager to generate negative attention on the White House with their newfound investigative authorities in the House, are planning their own probe on top of the Justice Department’s inquiry. Some Democrats, such as Senate Majority Whip Dick Durbin (D-Ill.), have said the president should be “embarrassed” by the situation. He and others argue that Biden has surrendered any moral high ground on the issue over former President Donald Trump, who faces a criminal inquiry over classified materials found at his Mar-a-Lago home in August.

For now, voter awareness of Biden’s document issue pales in comparison with the Trump matter last year: 35% said they had seen, read or heard “a lot” about the discovery of the documents by Biden’s lawyers or the House GOP’s investigation into the matter, and 23% heard a lot about Attorney General Merrick Garland’s appointment of a special counsel, compared with the 58% who heard the same about the FBI’s Mar-a-Lago raid.

While the saga over Biden’s documents isn’t making an equivalent splash, Morning Consult data suggests it could be blunting some positive momentum the president could be enjoying given rosier recent news on inflation.

Shares of voters who report seeing, reading or hearing something positive or negative over the past week about President Joe Biden 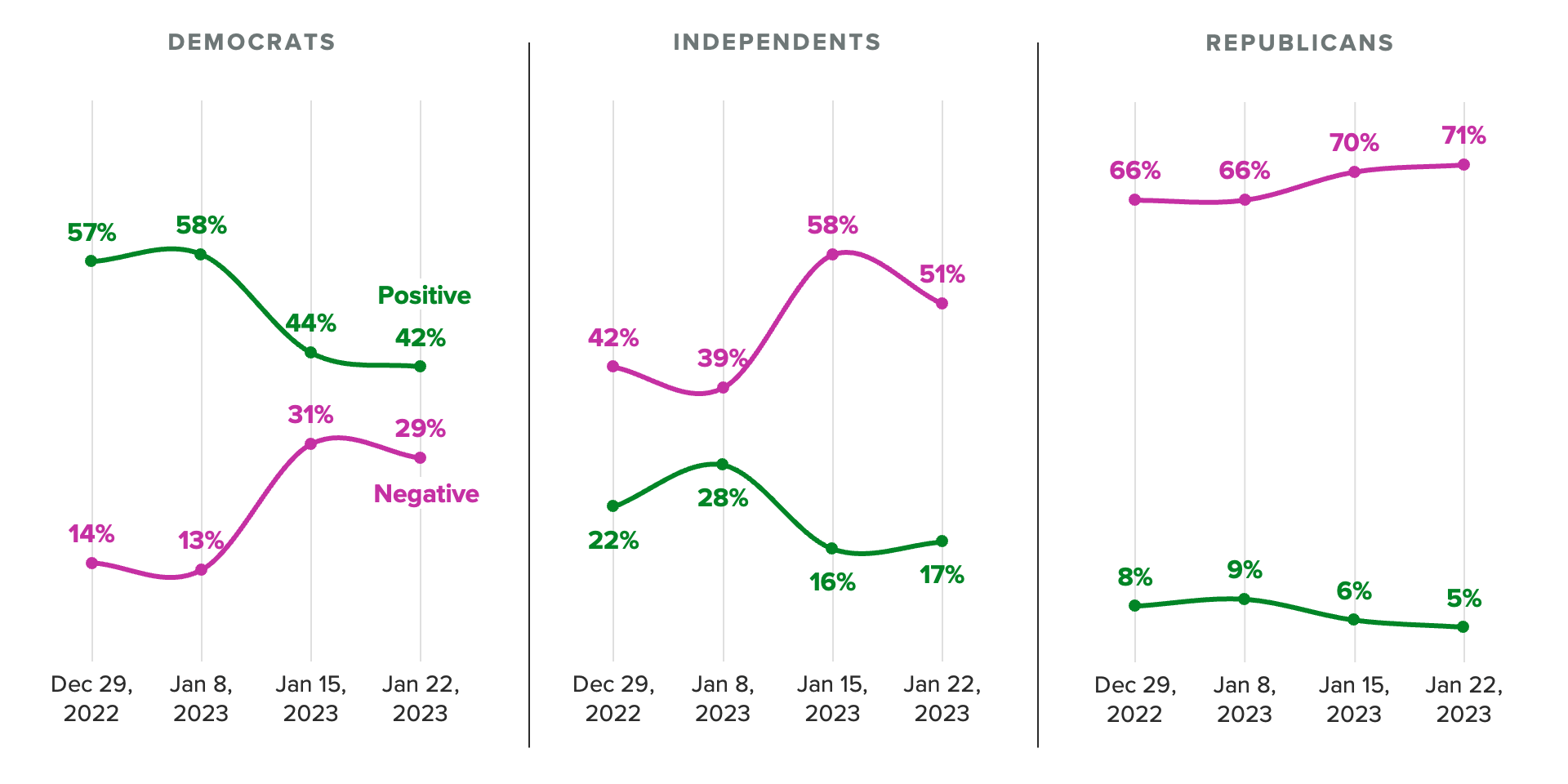 Surveys conducted among representative samples of roughly 2,000 registered voters each, with unweighted margins of error of +/-2 percentage points. The shares of voters who said they had seen, read or heard nothing about Biden are not shown.

Buzz about Biden is increasingly negative

The latest survey was conducted Jan. 20-22, 2023, among a representative sample of 1,990 registered voters, with an unweighted margin of error of plus or minus 2 percentage points.