GEN Z CORONAVIRUS IMPACT TRACKER
How the Coronavirus Outbreak is Changing Gen Z's Worldview
A new report dedicated to understanding how the pandemic is altering the young generation's habits, values, and outlook 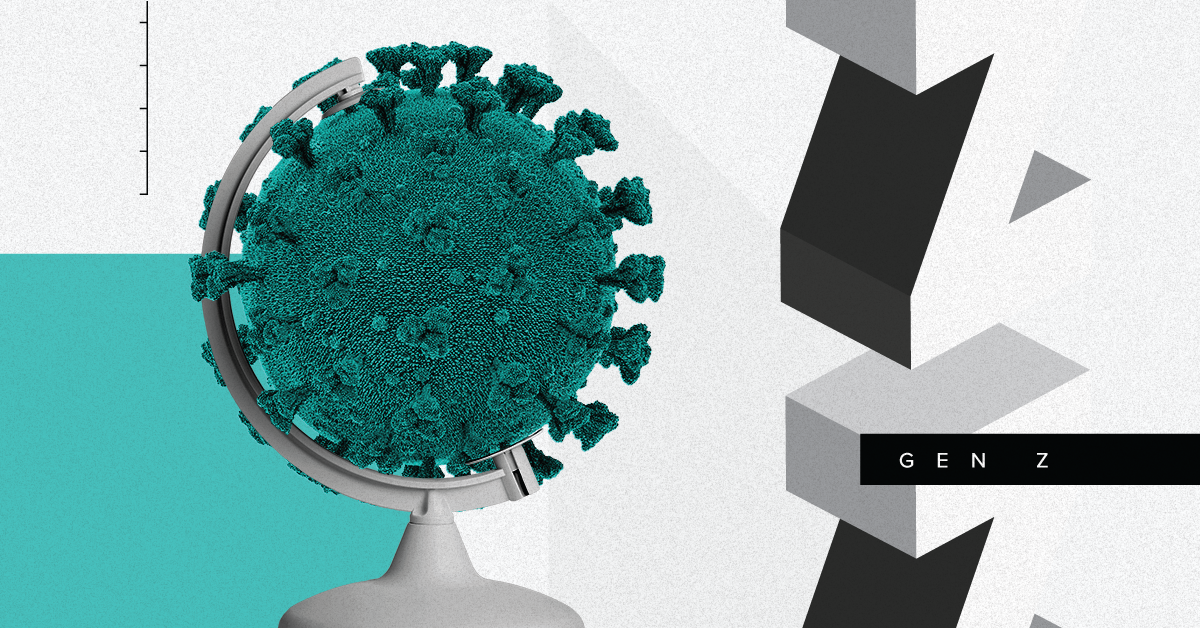 For Americans who came of age during the Great Depression, habits that formed during that period never fully left them, even decades after the economy had recovered and the world had shifted gears. New Deal voters formed one of the most lasting political coalitions in American history, transforming expectations of the role government could play in people’s lives. Consumers who had experienced destitution remained financially vigilant, saving and squirreling away goods, always aware that the good times might not last. These enduring impacts were pivotal in shaping a generation and the contours of the nation.

It is with that kind of era-defining and generation-altering moment in mind that Morning Consult is launching a new multiyear survey research project aimed at understanding how the coronavirus outbreak will influence Generation Z (those Americans born after 1997). While the crisis is still in its early stages, all signs point to this being a profoundly impactful event, with the potential to reorient younger Americans’ habits, values, and outlook on the world.

The research will cover a range of topics, including politics, consumer habits, trust in institutions, career expectations and more. The results are based on a tracking survey of 1,000 Americans ages 13-23, and will be updated periodically on this page. To always get the latest updates, sign-up here.

⇾ Members of Gen Z already see the outbreak as the most impactful event of their lifetimes: 78 percent say the pandemic has had a major impact on their worldview, a higher share than for a range of other events including mass shootings, the 2008 financial crisis and President Donald Trump’s election.

⇾ There is widespread distrust of people in power and a sense the world isn’t fair: Just 7 percent of Gen Z members put “a lot” of trust in people in positions of power, and only 6 percent strongly agree that the world is a fair place.

OUTBREAK CONCERN
Concern About the Pandemic Has Increased Over Time
The share of U.S. adults who are "very" concerned about the coronavirus outbreak. Gen Z adults are 18-23 years old (this chart is from Coronavirus Trend Tracker, which does not include surveys of 13-17 year-olds). 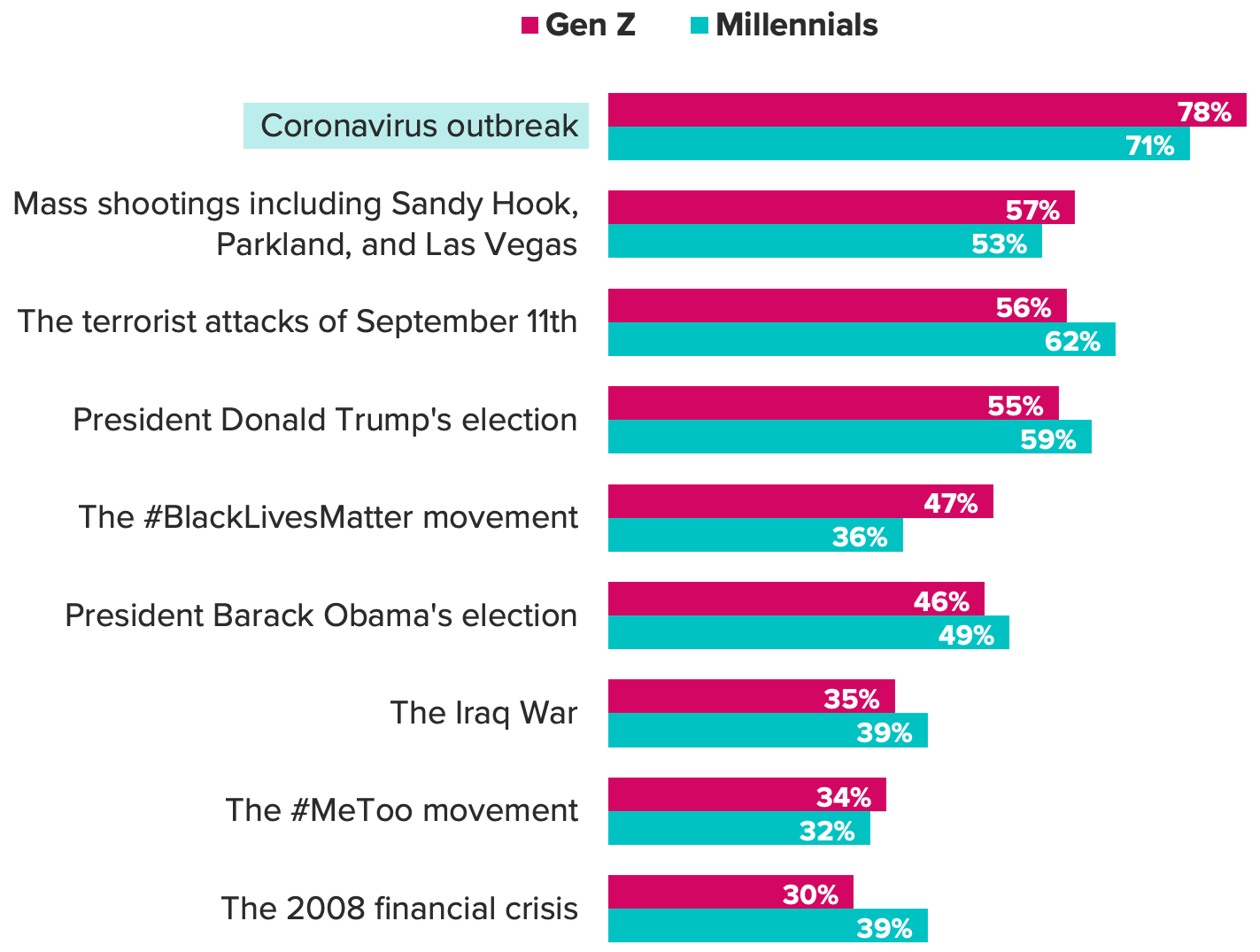 ⇾ Gen Z respondents of all stripes say the coronavirus outbreak has influenced their outlook: Whether looking at race, gender, partisanship, community-type or education level, at least 7 in 10 members of each major sub-demographic group say the pandemic has impacted their worldview.

⇾ Additionally, 63 percent of this generation expects the pandemic will impact their personal future, while 20 percent say it will not.

GENERAL CONCERN
Gen Z Puts Others First: Most Concerned About COVID's Impact on Their Family, National Health
The share who say they are very concerned about each of the following in light of the coronavirus outbreak: 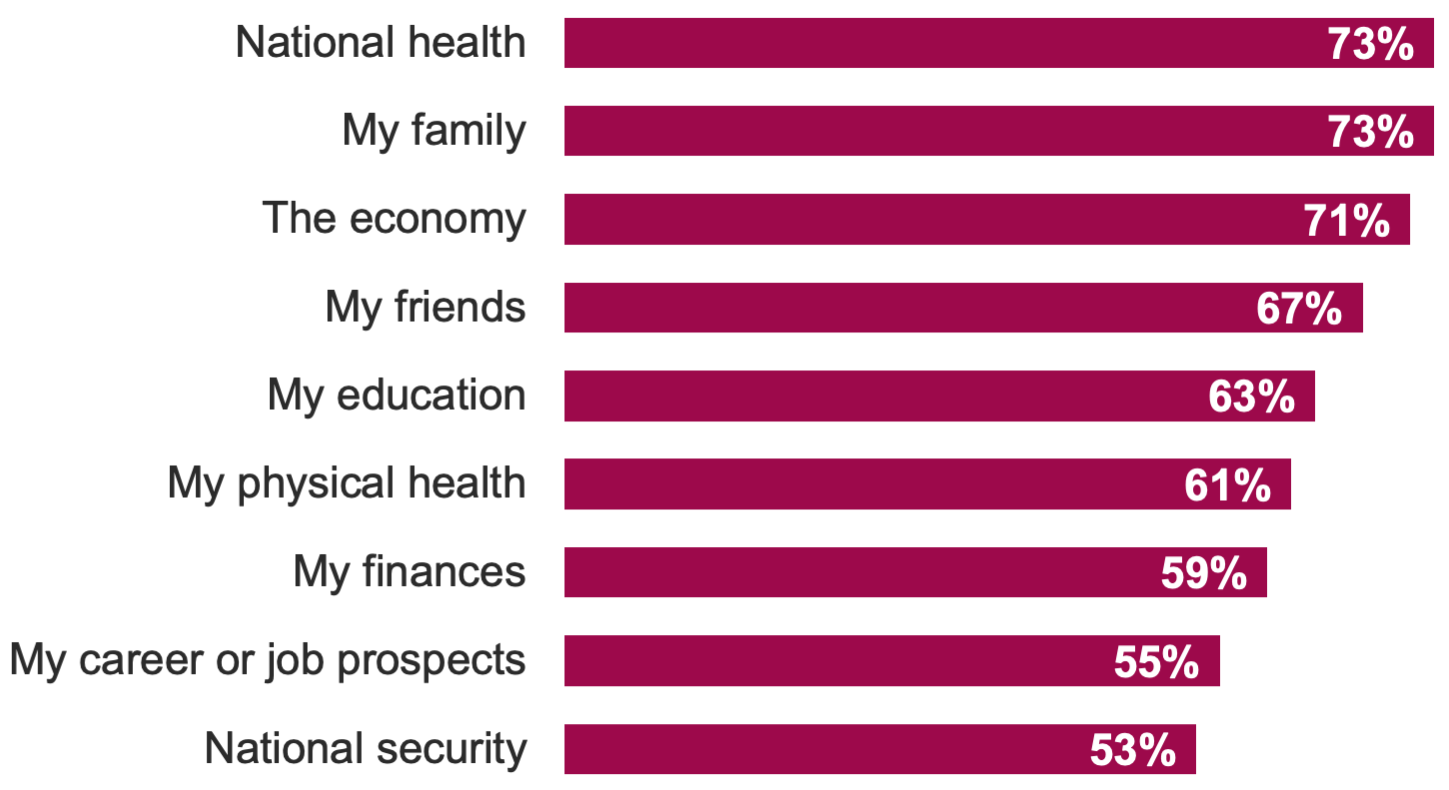 TRUST IN INSTITUTIONS
A Slim Majority of Gen Z Trusts the U.S. Government, While Trust in Business is Eroding
The share of Gen Z respondents who say they trust each of the following "a lot" or "somewhat"
KEY DATA AND RELATED INSIGHTS

⇾ Trust in the news media dips: The share of Gen Z members who say they trust the news media fell 7 percentage points between April and May, the largest decline for any institution tracked.

PERSONAL VALUES
Honesty Is the Most Important Value for Gen Z; Care For the Needy Seen as More Important in Light of COVID-19
The share of Gen Z respondents who say that each value is... 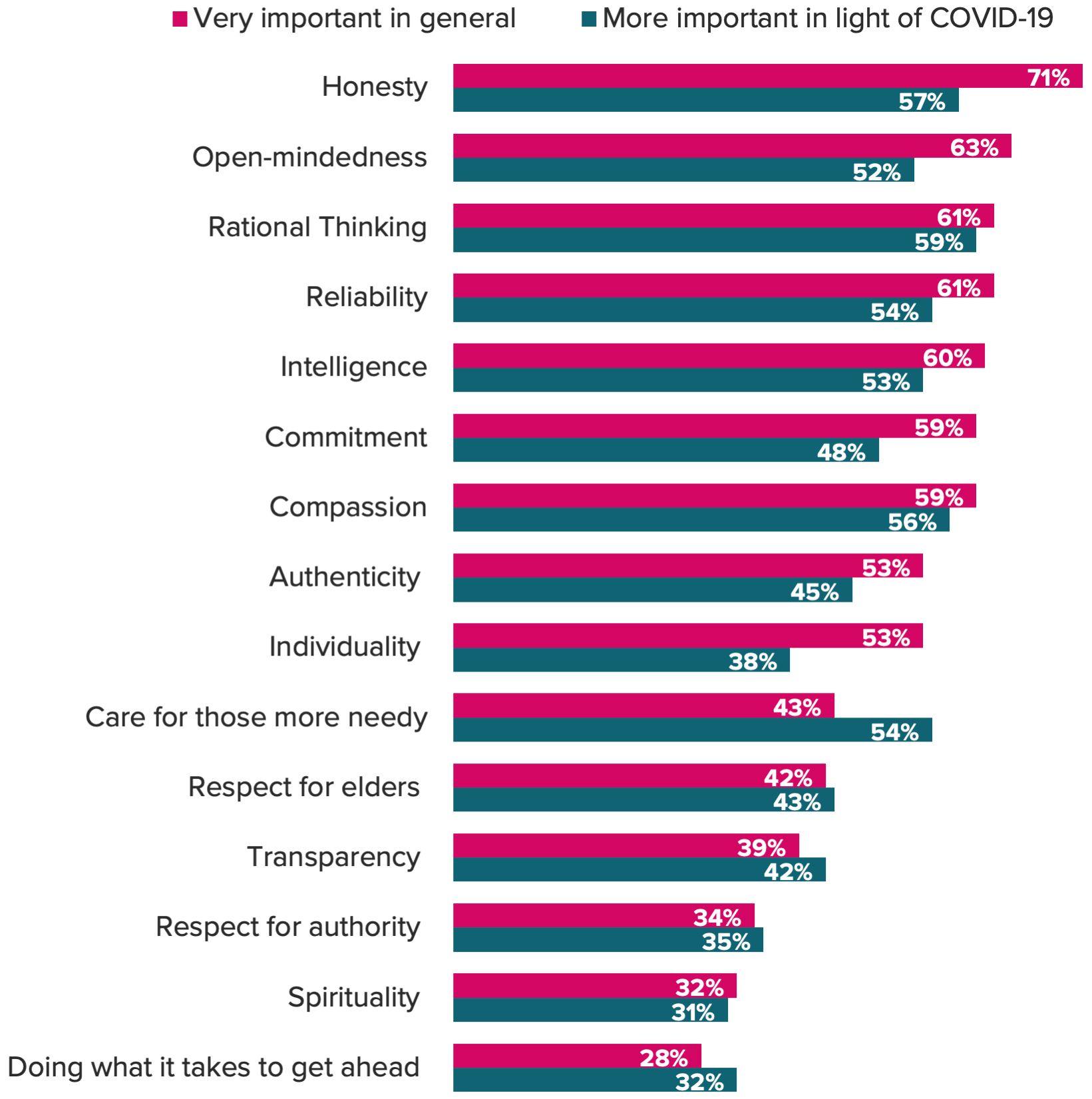 EDUCATIONAL CHALLENGES
Concerns Over Educational Challenges Posed by the Pandemic Are Common for Gen Z
Thinking about your experience as a student during COVID-19, do you agree or disagree with the following statements? 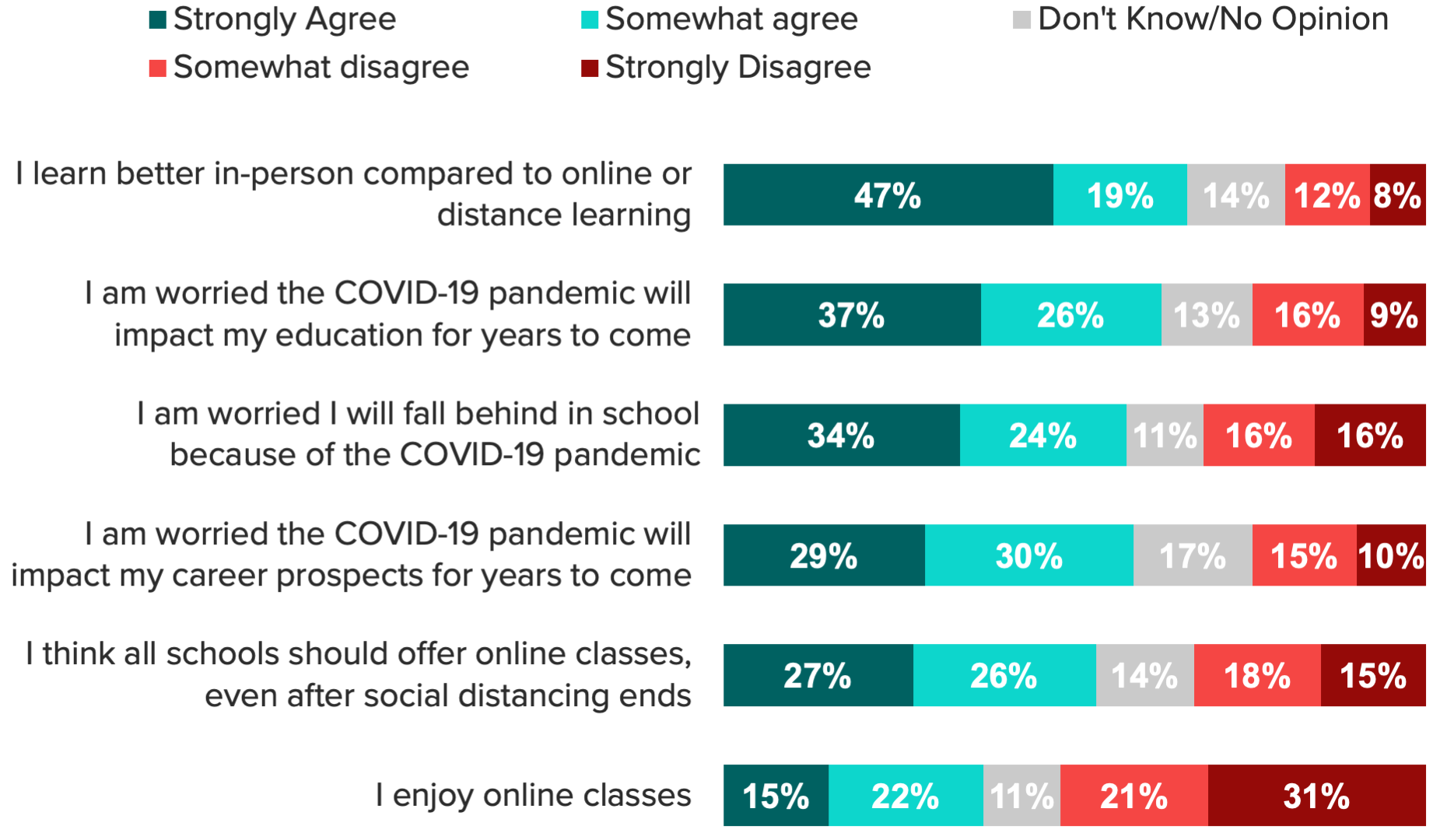 WORKING DEMANDS
Ability to Work Remotely Isn't a Top Employment Priority for Gen Z, But its Becoming More Important Amid the Pandemic
The share of Gen Z respondents who say each of the following are very important when considering where to work 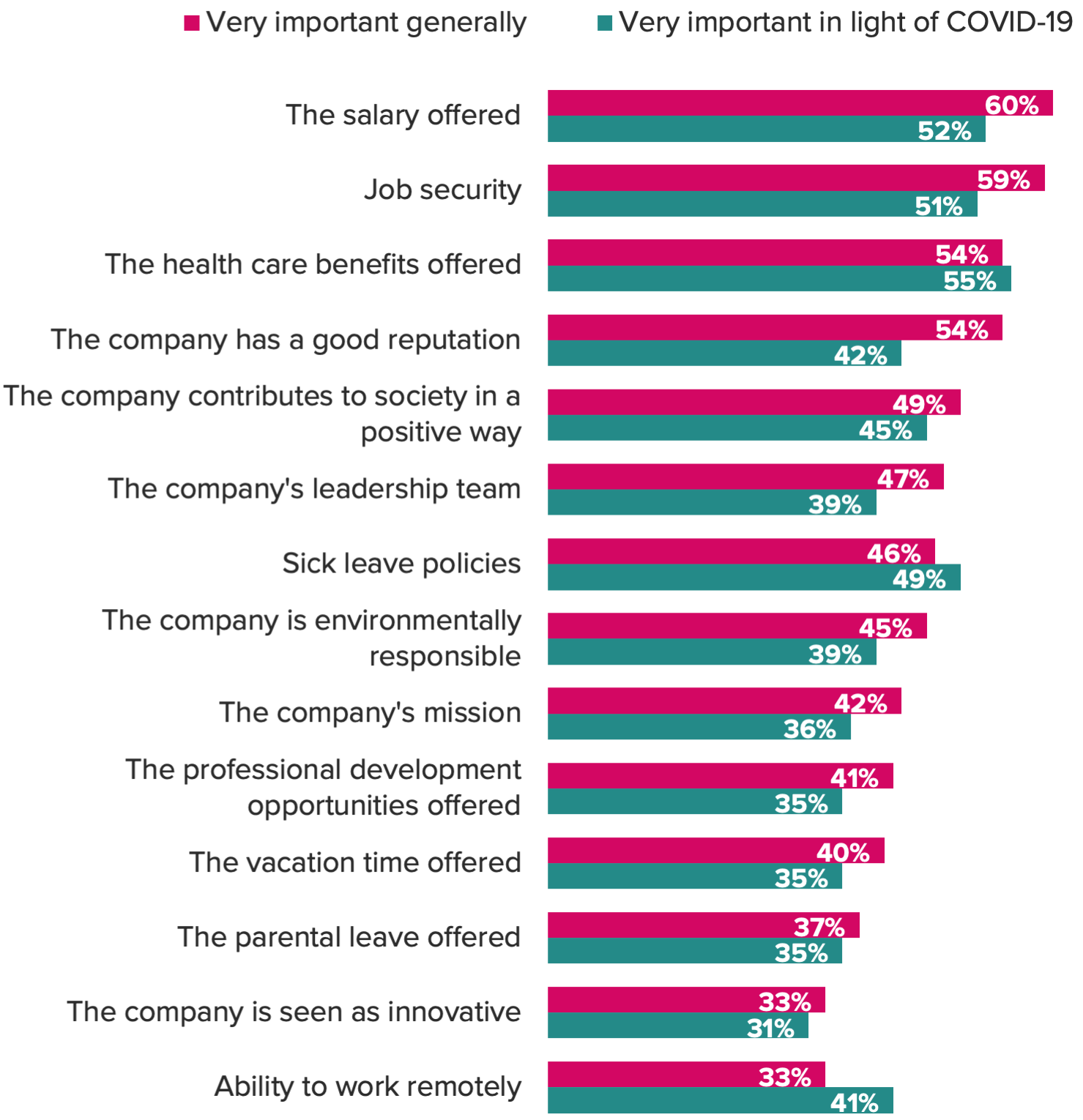 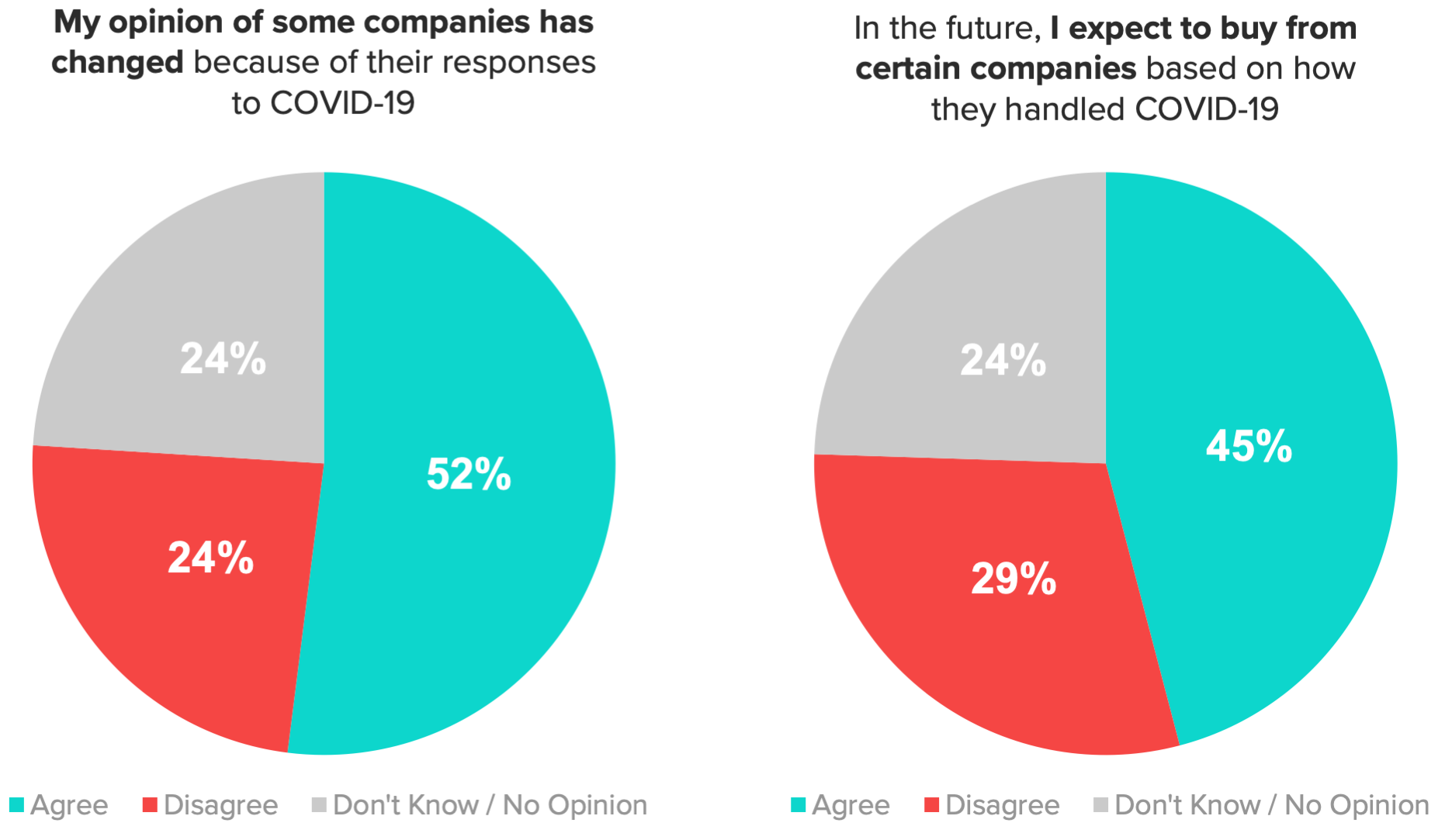 ⇾ Brands that treat employees well can win over Gen Z: 62 percent of Gen Z say it’s very important for companies they purchase from to treat their employees well, a higher share than say the same about any of the other factors assessed, including price and quality of products. Furthermore, 74 percent say that a company’s treatment of employees during the pandemic will impact their future loyalty.

⇾ The actions brands take now will matter down the line for Gen Z: 7 in 10 Gen Z respondents say that actions a company takes to help others during the pandemic will boost their loyalty after it ends. Sixty percent say the same about how companies communicate with customers during the pandemic.

By Nick Laughlin. Notice any issues? Email us.