LOOKING FOR MORE ON GEN Z?

GEN Z WORLDVIEW TRACKER
How 2020 is Impacting Gen Z's Worldview
A tracking report dedicated to understanding how a tumultuous year is altering the young generation's habits, values, and outlook 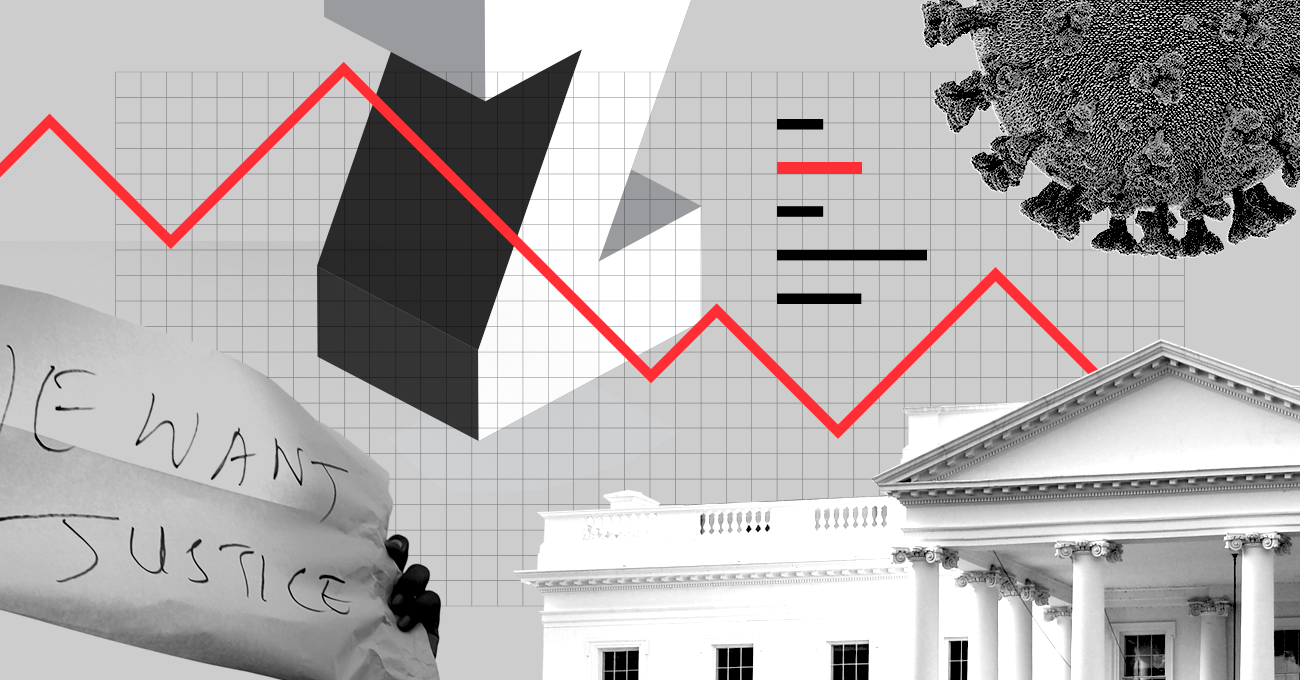 Get a downloadable report with the latest Gen Z data here.

For Americans who came of age during the Great Depression, habits that formed during that period never fully left them, even decades after the economy had recovered and the world had shifted gears. New Deal voters formed one of the most lasting political coalitions in American history, transforming expectations of the role government could play in people’s lives. Consumers who had experienced destitution remained financially vigilant, saving and squirreling away goods, always aware that the good times might not last. These enduring impacts were pivotal in shaping a generation and the contours of the nation.

It was with that in mind that Morning Consult launched this tracking report in May to better understand how the coronavirus outbreak, another potentially era-defining and generation-altering moment, would impact Gen Z’s worldview. Then, less than a month after launch, yet another seismic event occurred: the death of George Floyd while in police custody and the subsequent protest movement it inspired. As such, we’re broadening the scope of this report to look more generally at how the tumult of 2020 — a pandemic, recession, protests, the upcoming election and more — is shaping this young generation’s habits, values and outlook on the world.

The research will cover a range of topics, including politics, consumer habits, trust in institutions, career expectations and more. The results are based on a tracking survey of 1,000 Americans ages 13-23 and will be updated periodically on this page.

⇾ Trust in institutions is falling across the board: In just two months, the average trust rating for 15 major institutions Morning Consult is tracking has dropped from 56 percent to 46 percent. The largest declines are with the police (24-point drop in trust), the U.S. government (-17), the criminal justice system (-14) and the news media (-13).

⇾ The vast majority of Gen Z supports Black Lives Matter and took at least one action related to recent protests: 12 percent attended a protest, 41 percent posted on social media, and 46 percent have made an effort to learn more about actions they can take to support racial justice. Just 22 percent say they have not taken any action related to the protests. 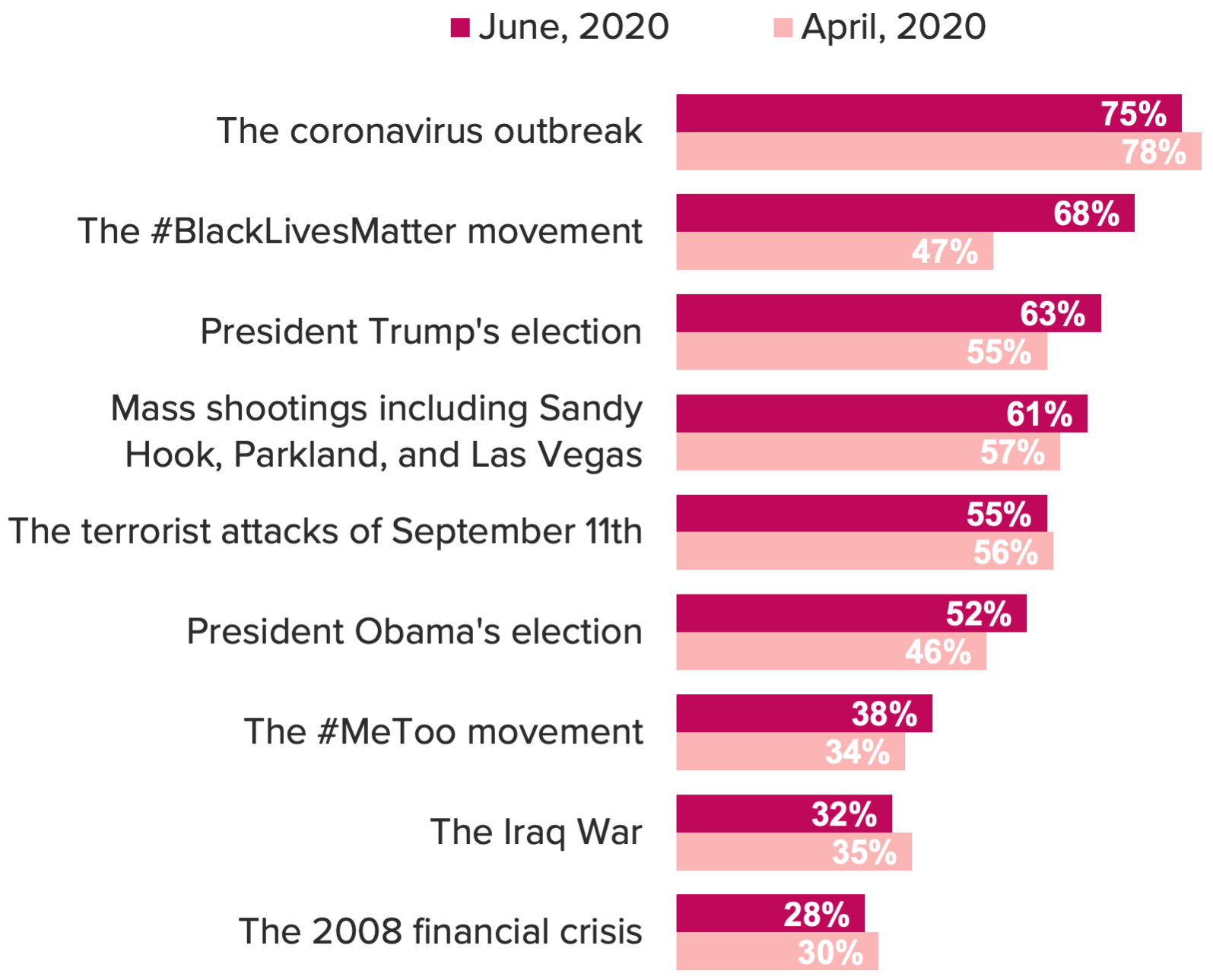 ⇾ Gen Z respondents of all stripes say the coronavirus outbreak has influenced their outlook: Whether looking at race, gender, partisanship, or education level, at least 7 in 10 members of each major sub-demographic group say the pandemic has impacted their worldview.

GENERAL OUTLOOK
81% of Gen Z Says the U.S. is on the Wrong Track, Up Sharply from May
Now, generally speaking, would you say that things in the country are going in the right direction, or have they pretty seriously gotten off on the wrong track?
LOOKING FORWARD
Even as Pessimism About the Future of the Country Grows, Most of Gen Z Remains Optimistic About Their Personal Futures
The share of Gen Z members who say they are "very" or "somewhat" optimistic about each of the following:
KEY DATA & RELATED FIGURES

⇾ Gen Z has a growing sense they can impact the world: 62 percent of Gen Z agree they have that potential, up from 56 percent in May, and 10 points higher than the share of millennials who say the same.

⇾ Trust in police falls dramatically amid protests: 44 percent of Gen Z trust the police, down 24 points from April. That level of trust is far lower than it is among the adult population (73 percent).

⇾ Trust in the news media continues to slide: The share of Gen Z members who say they trust the news media fell 13 percentage points between April and June. 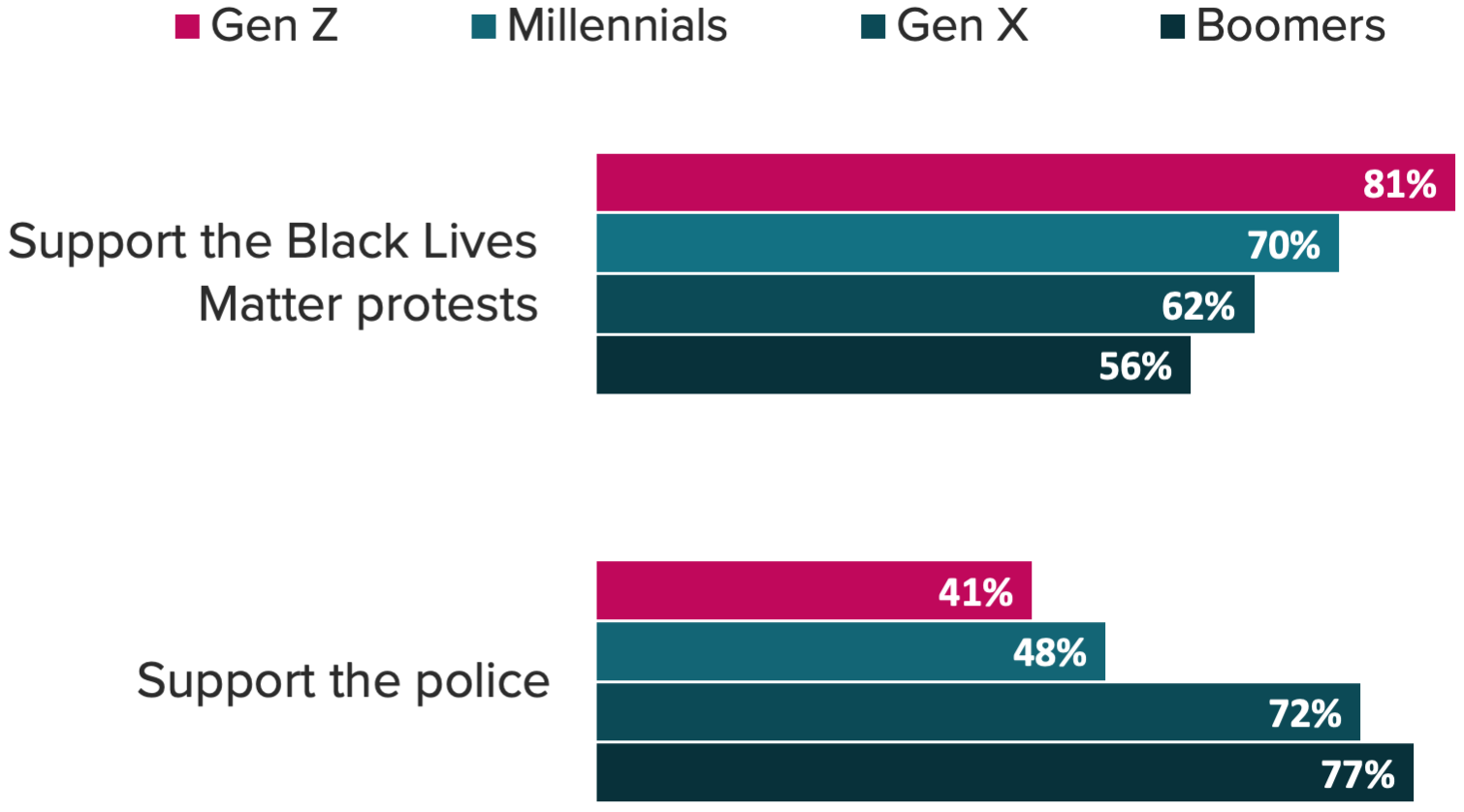 ⇾ 82 percent of Gen Z agrees that racism is a major problem in America, and 79 percent agree that Black Americans are frequently discriminated against in the United States.

BLACK LIVES MATTER PROTESTS
12% of Gen Z Attended a Recent Protest and 39% Participated in #BlackOutTuesday
Share of U.S. adults indicating that they have done any of the following in recent weeks since the death of George Floyd: 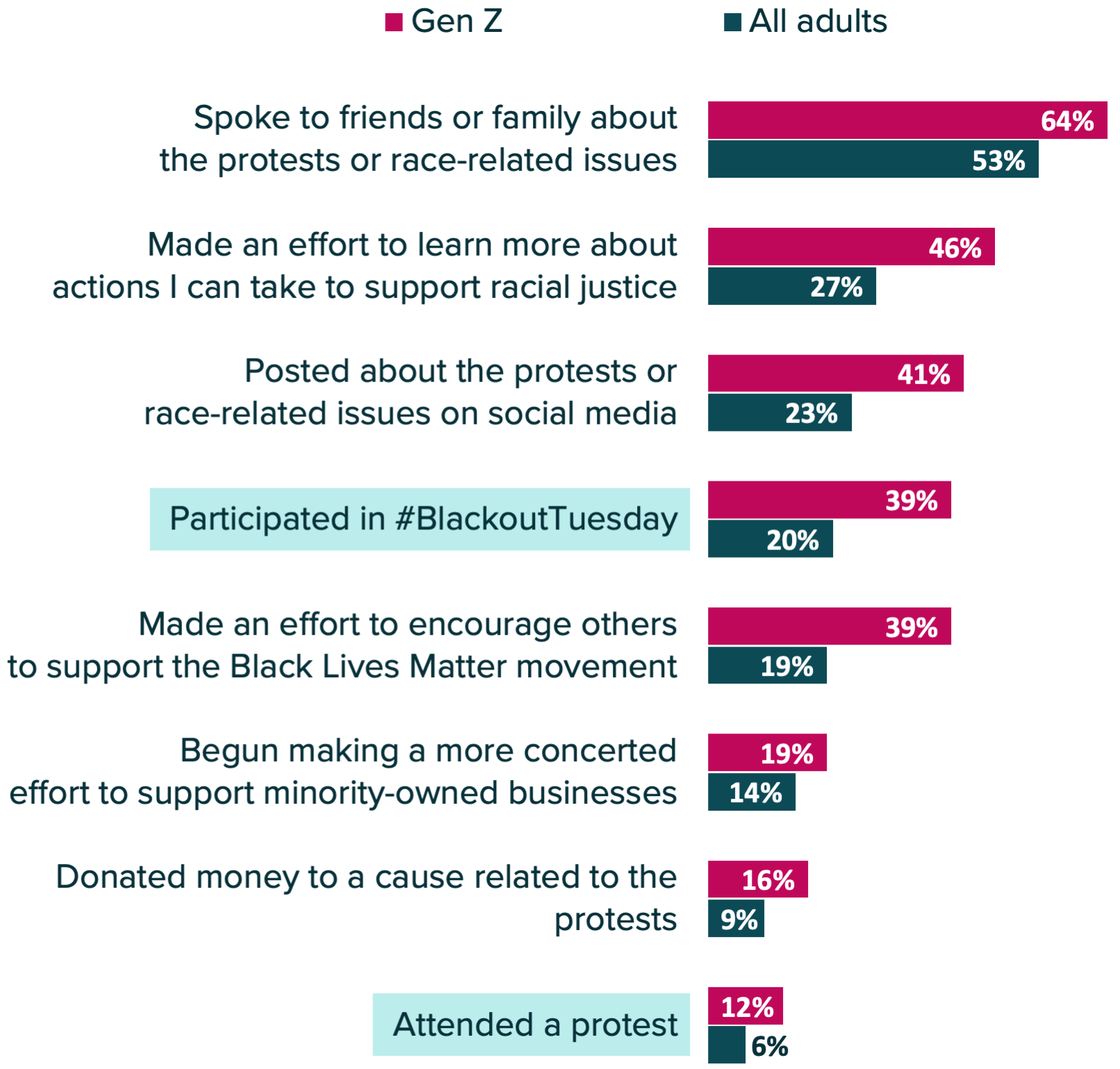 ⇾ 54 percent of Gen Z supports the movement to defund the police, compared to 36 percent of all adults. Among just Gen Z Democrats, 88 percent support the movement.

CONSUMER RESPONSE
Gen Z is More Likely to Hold Brands Accountable for Advocacy Around Black Lives Matter
Share of U.S. adults who somewhat or strongly agree with each of the following: 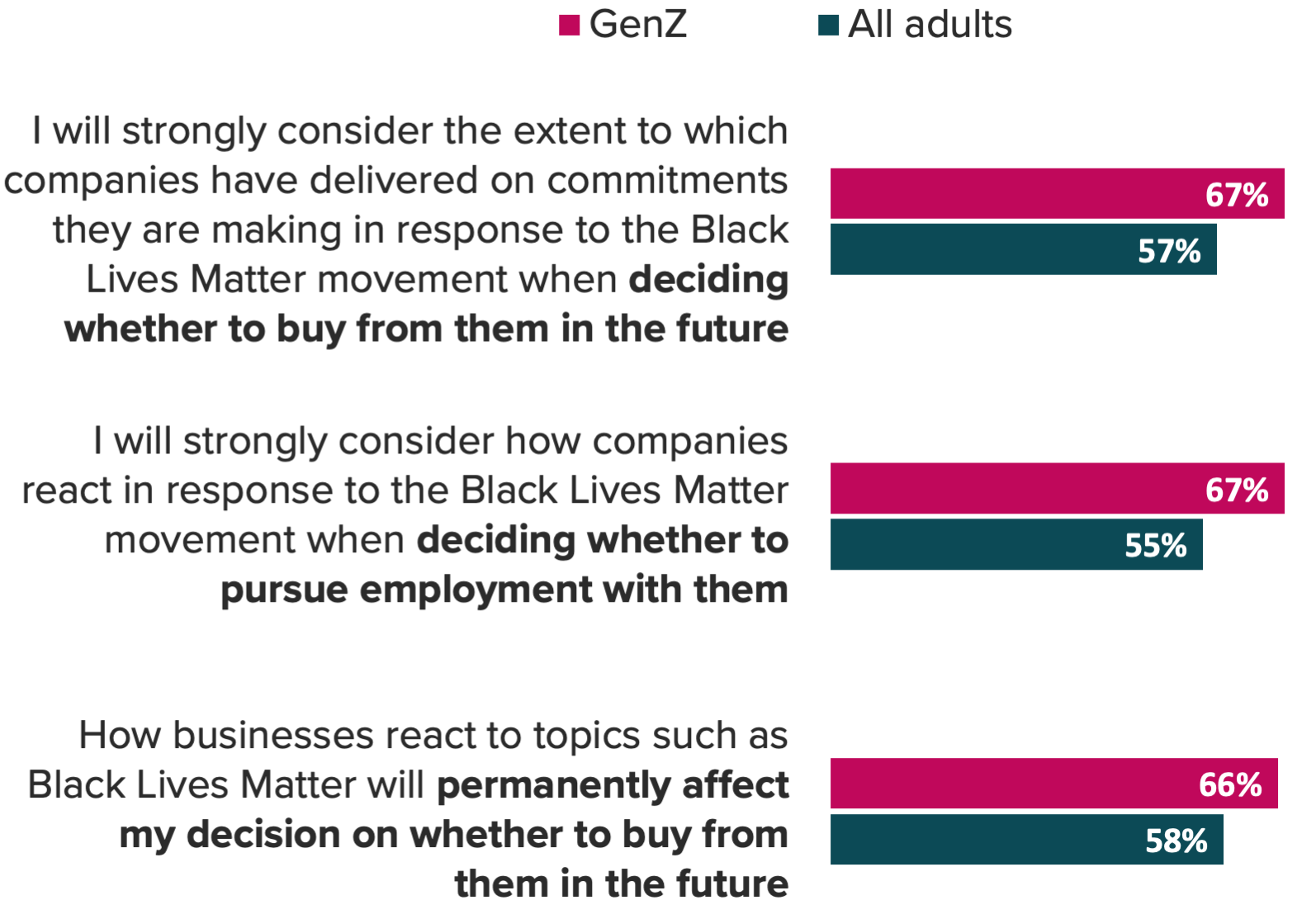 “Gen Z strongly believes that corporations and their leaders play an important role in this country and as such should use their influence to not only impact political and cultural issues, but also specifically demand action from entities with the power to enact systemic change.

Importantly, how companies meet this generation’s expectations could have real implications for their future viability in terms of both the consumers that support them and the talent they attract. Two-thirds of Gen Z agree that how businesses react and express themselves with regard to Black Lives Matter will permanently affect their decision to buy from them in the future, and slightly more say that the extent to which companies actually deliver on the statements, promises and commitments made today will play a significant role in those purchasing decisions.”

POLITICAL IMPACT
Positive Views on Patriotism, Nationalism, and Capitalism are in Decline
Net opinion (share who have positive opinion minus negative opinion) for each of the following:
KEY DATA AND RELATED INSIGHTS

FINANCIAL OUTLOOK
Personal Financial Concern is Down Slightly From April
The share of Gen Z respondents who...
KEY DATA AND RELATED FIGURES

By Nick Laughlin. Notice any issues? Email us.