BRAND INTELLIGENCE
How the NBA’s China Debacle Is Affecting their Reputation, And What that Could Mean for Other Brands 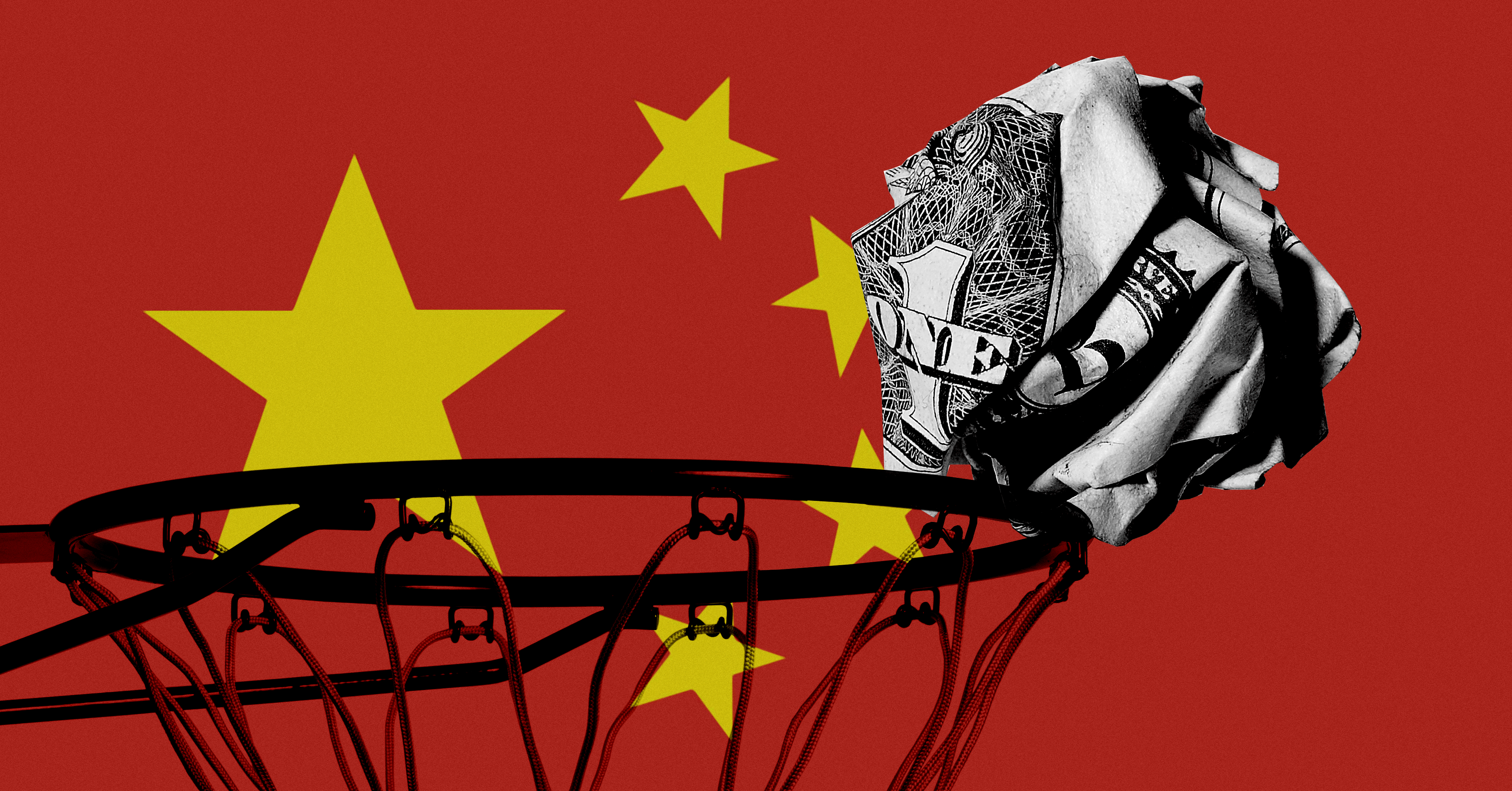 In recent weeks, the National Basketball Association has come under fire for a series of incidents in which players and league officials have acted to avoid agitating the Chinese government amid anti-state protests in Hong Kong. The spotlight on the NBA is unusually intense for a not entirely uncommon practice, raising the possibility that this will set a new precedent for U.S. corporations seeking to balance the tension between domestic and international political demands.

In order to determine how this is impacting the league’s reputation, Morning Consult analyzed NBA brand tracking data from the last month. Based on over 21,000 survey interviews drawn from Brand Intelligence, this initial review suggests the reputational backlash to the NBA has been minimal so far, even as the news has begun to register for consumers.

This story is developing, and so is public opinion.
Get a follow-up report within two weeks tracking how consumer sentiment has evolved
Negative buzz has spiked in recent days as the news has penetrated

Furthermore, on October 10, the volume of daily Twitter mentions tracked in Brand Intelligence reached it’s third highest point of 2019, following only the period around the NBA Finals. 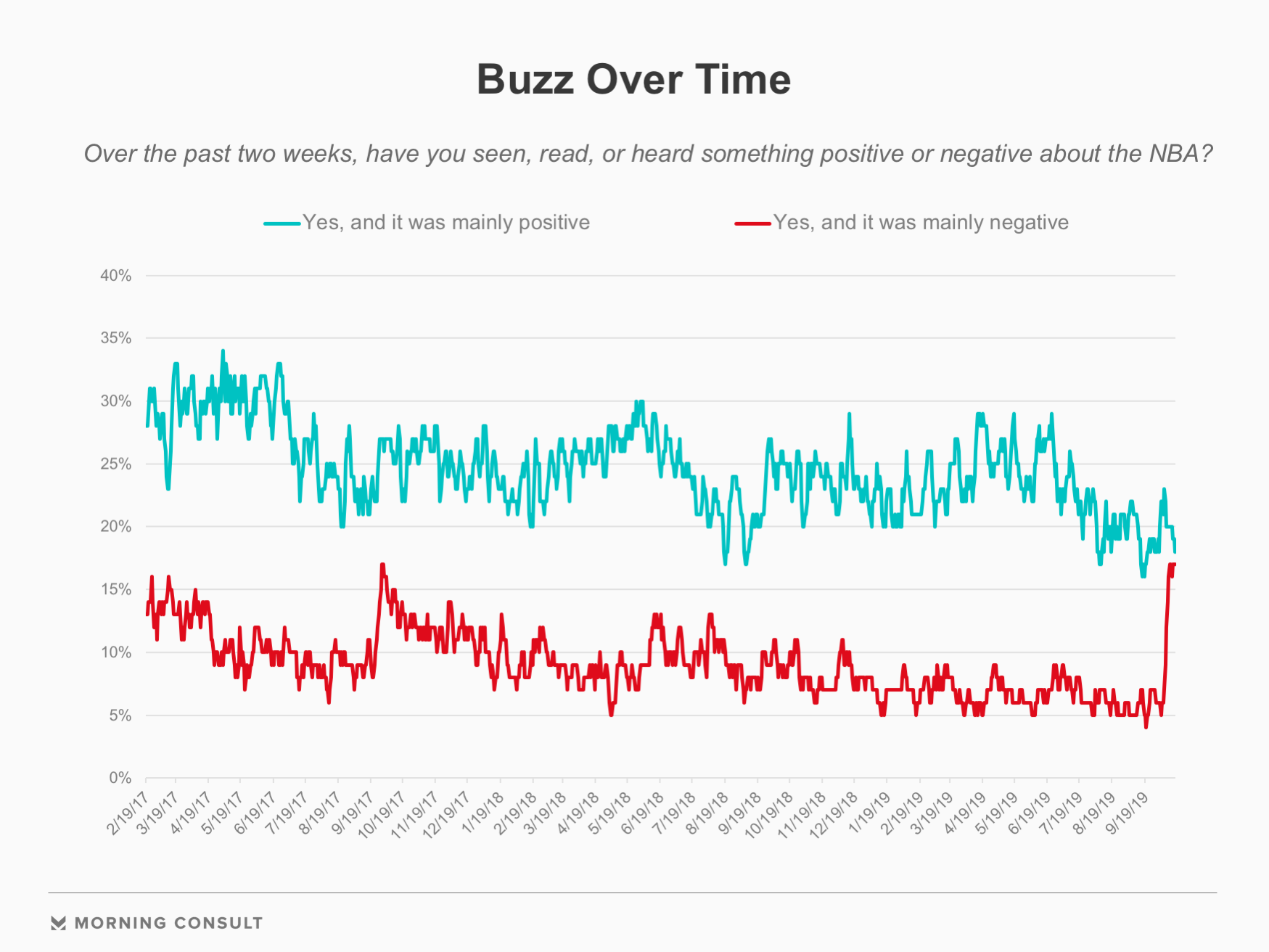 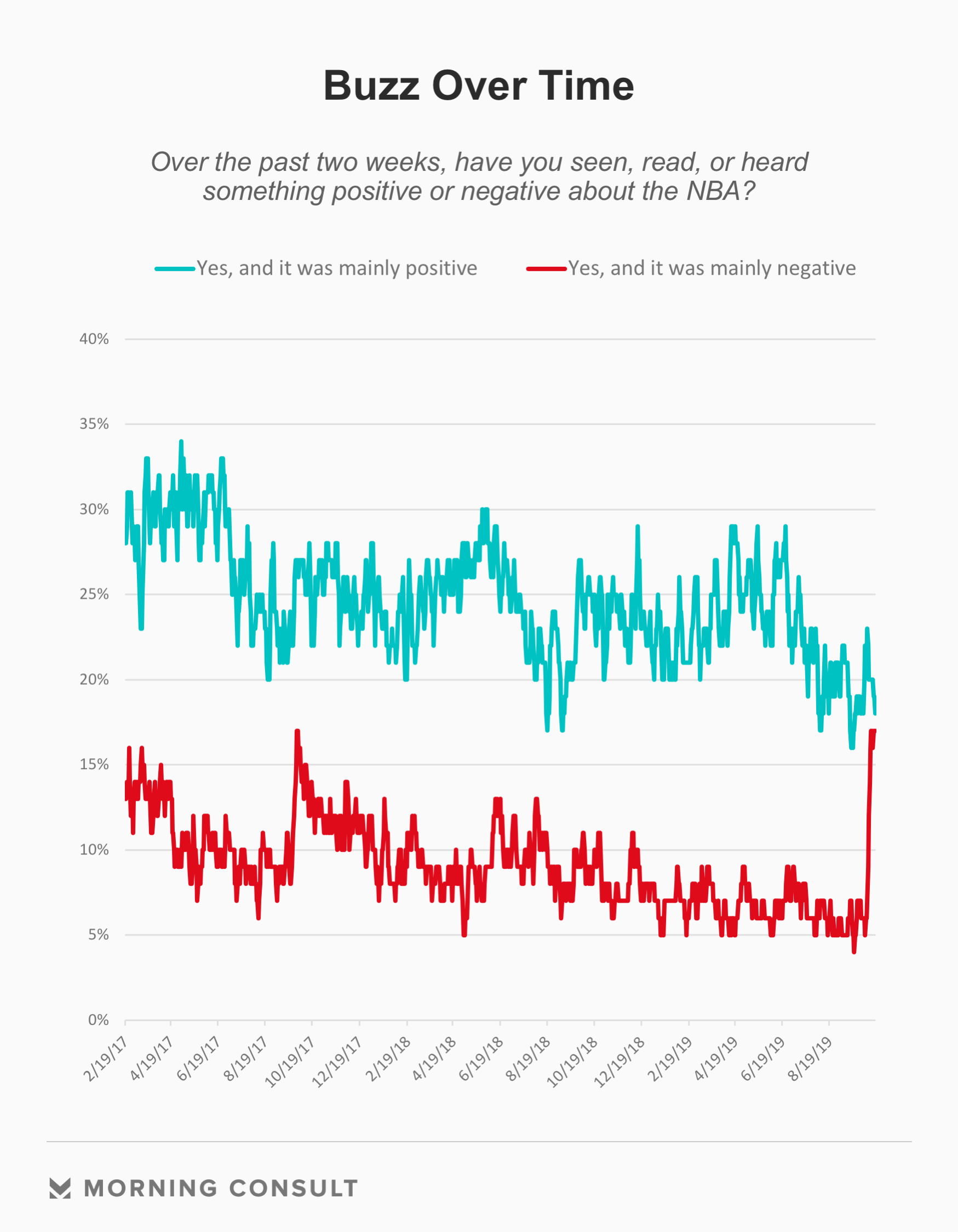 However, favorability and purchasing consideration have remained stable

Despite the increased scrutiny, perceptions of the league haven’t shifted in any notable way – including among adults who are considering purchasing from the NBA. 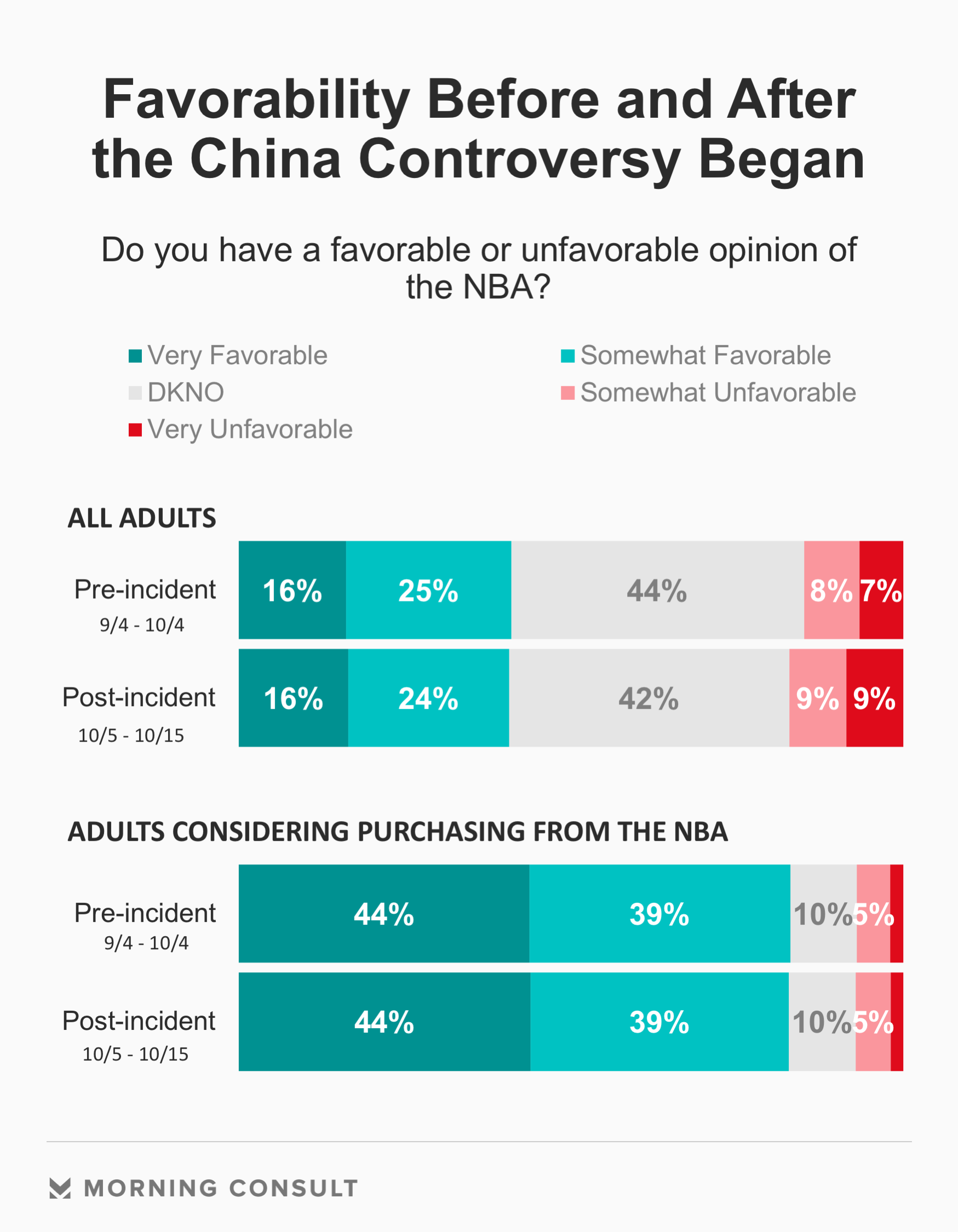 Overall, purchasing consideration has remained flat – in both the period before the controversy started and after, 28 percent of American adults said they would consider purchasing from the NBA.

Republicans are slightly more troubled by the matter than Democrats

No major demographic group has reacted in a dramatic way to the China controversy, but certain groups have soured more than others. As the chart below shows, Republicans are among the most likely to have changed opinions in recent days, with net favorability shifting from +16 to +11. This contrasts with Democrats, who’s net favorability has actually ticked up slightly. 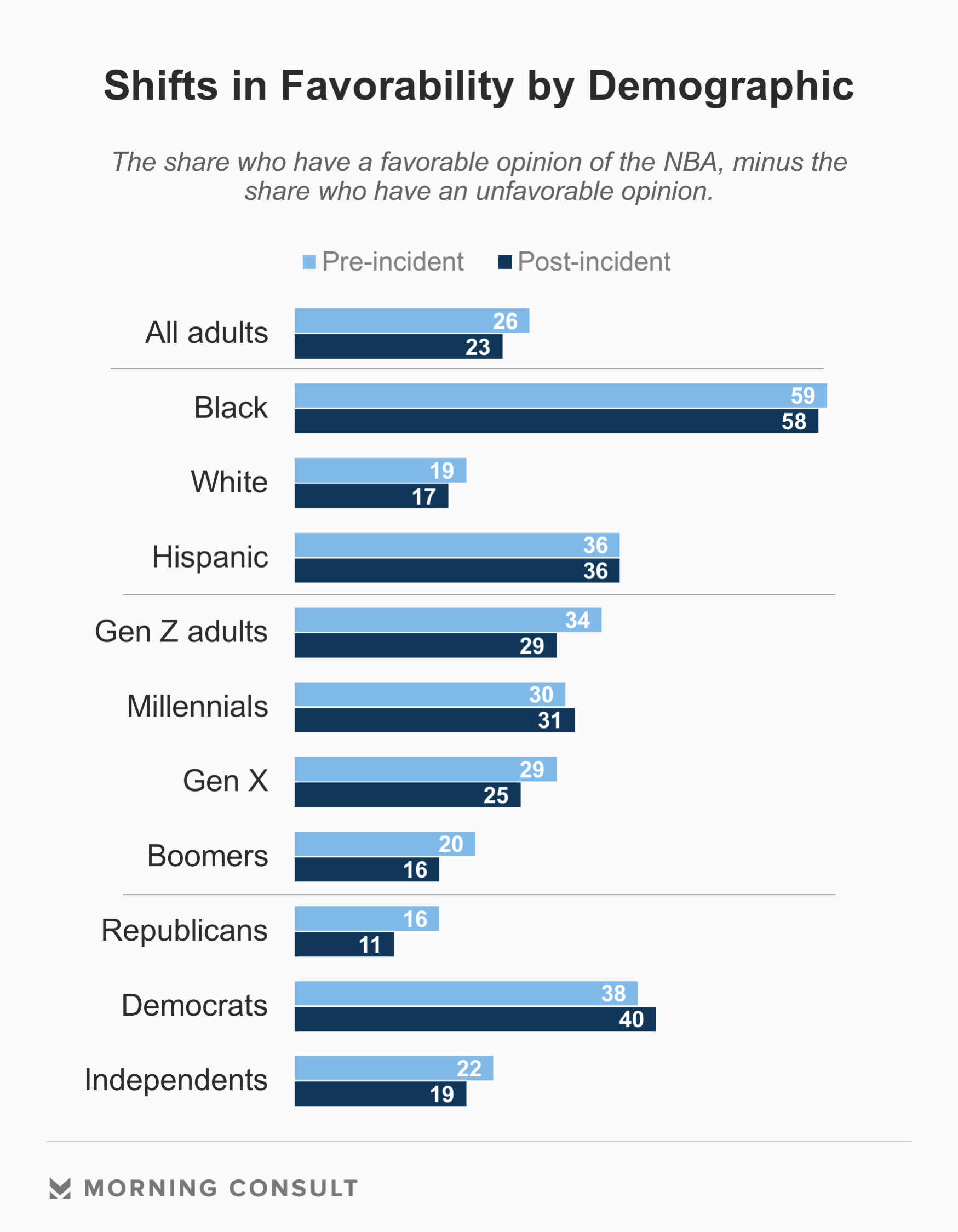 When the NFL anthem-kneeling controversy took hold in late 2017, the reaction was swift and severe.

In one month, the net favorability among Trump voters plummeted by over 60 points, and has never fully recovered. A Morning Consult report from early 2018 found The NFL was the 6th most politically polarizing brand in the country.

The news penetration was also far more significant – at the hight of the controversy, nearly 60 percent of Americans said they had seen something negative about the NFL.

Brand Intelligence data indicated President Trump’s involvement acted as a catalyst for this backlash – with his supporters reacting more negatively once he began tweeting and speaking about the issue. Thus far, Trump has remained relatively quiet on the NBA.

With over 75,000 annual interviews on every brand, Brand Intelligence brings together millions of survey interviews on thousands of brands to provide real-time insight and analytics into the most important brand metrics. The results on this page are based on 21,114 survey interviews with U.S. adults between September 4, 2019 and October 15, 2019.