REPORT PREVIEW
YouTubers are Among the Most Popular Celebrities for Gen Z. How Much Should Brands Prize Their Endorsements?
Stars like PewDiePie and Jeffree Star have near universal name recognition with America's youngest consumers

The post is a preview of The Influencer Report: Engaging Gen Z and Millennials, released on November 5th, 2019. Sign-up below to get the full report.

In a new survey conducted by Morning Consult, Americans aged 13-38 were given an open-ended prompt: name their three favorite influencers. No name drew more mentions than PewDiePie.

A lightning rod for controversy and steady stream of entertainment for fans, the 30-year-old YouTuber has achieved levels fame few other online personalities can claim. Since launching in 2010, his channel has amassed over 23 billion views, a mix of video game commentary and irreverent humor.

And as Morning Consult’s new survey illustrates, YouTubers like PewDiePie are as popular as mainstream celebrities among America’s youngest consumers.

–Ninety-seven percent of Gen Z use YouTube, most of them daily – notably more even than other popular platforms like Instagram and Snapchat. This has led the brightest stars on the platform to attain near universal name recognition with Gen Z.

–Ninety-five percent of Gen Z men know who PewDiePie is, three points below Justin Bieber and tied with LeBron James. Moreover, 62 percent have a favorable opinion of PewDiePie, 44 points higher than Bieber and 7 higher than James. 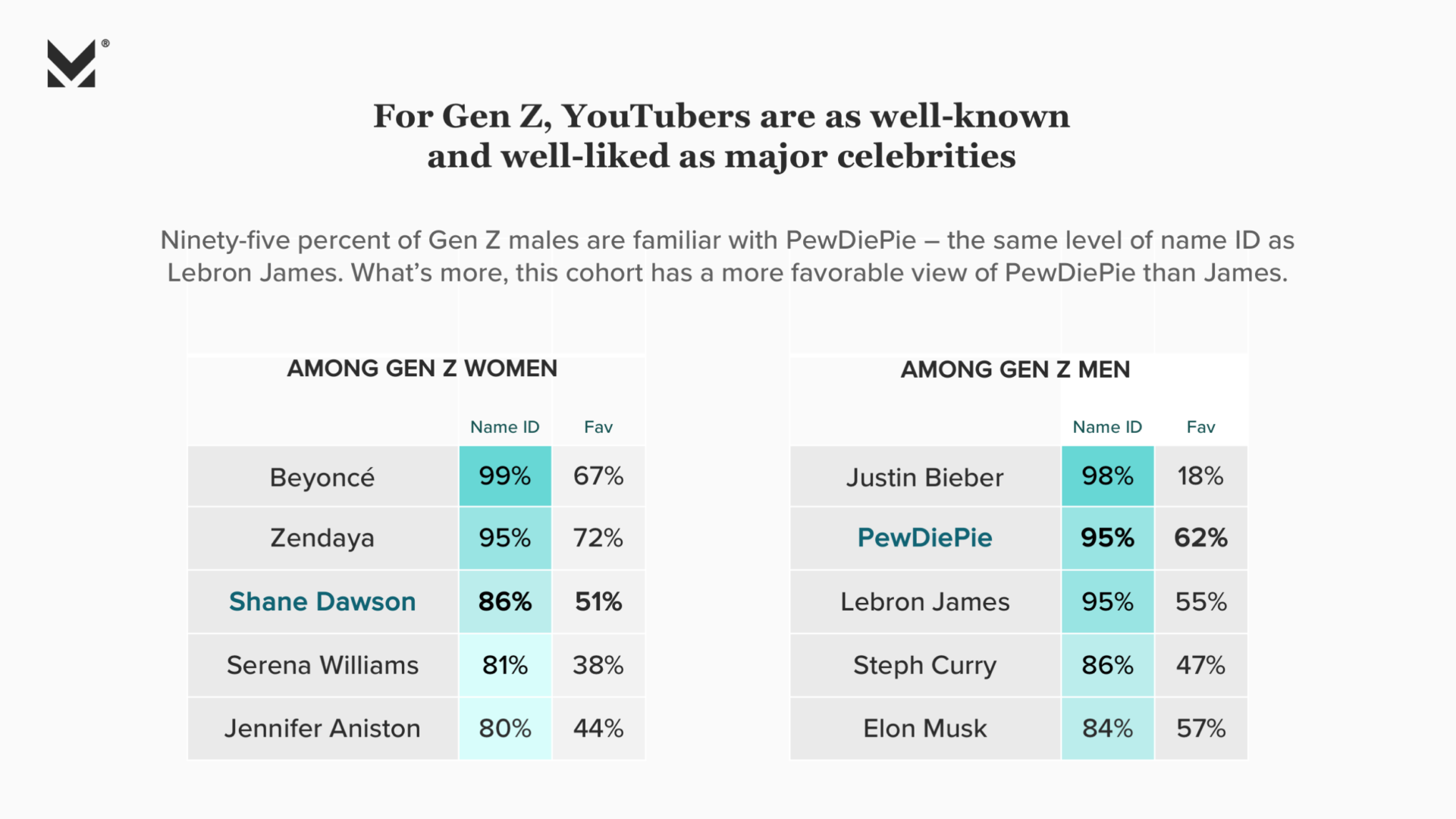 Despite the huge popularity among teenagers and young adults, many of the most prominent YouTubers remain largely unknown even among older Millennials.

–Shane Dawson, an early YouTube adopter, is one of the more popular stars on the platform. Eight-six percent of Gen Z women are familiar with him – about five points higher than Serena Williams or Jennifer Aniston. But among 32-38 year-olds, 60 percent don’t know who he is, and only 13 percent have a favorable impression. 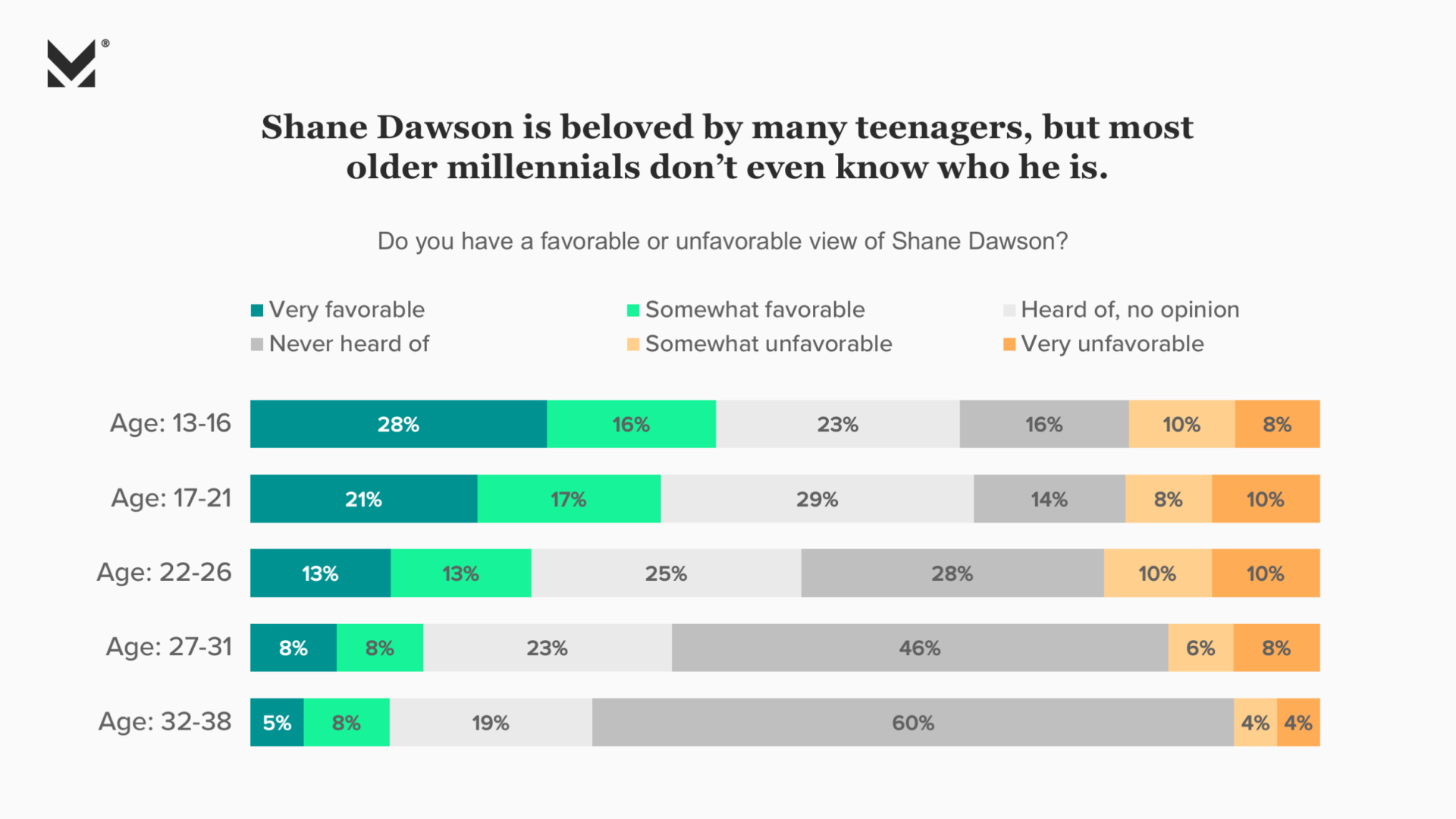 The vast discrepancy in name recognition between teenagers and older millennials holds true for other top YouTubers included in the survey.

And even within Gen Z, there are significant demographic divides regarding the perception of top YouTubers.

–Jeffree Star, another prominent influencer on the platform, has a net approval of +14 among Gen Z women, but -13 among Gen Z men. PewDiePie’s appeal, on the other hand, is far stronger with Gen Z men, and particularly Republicans. 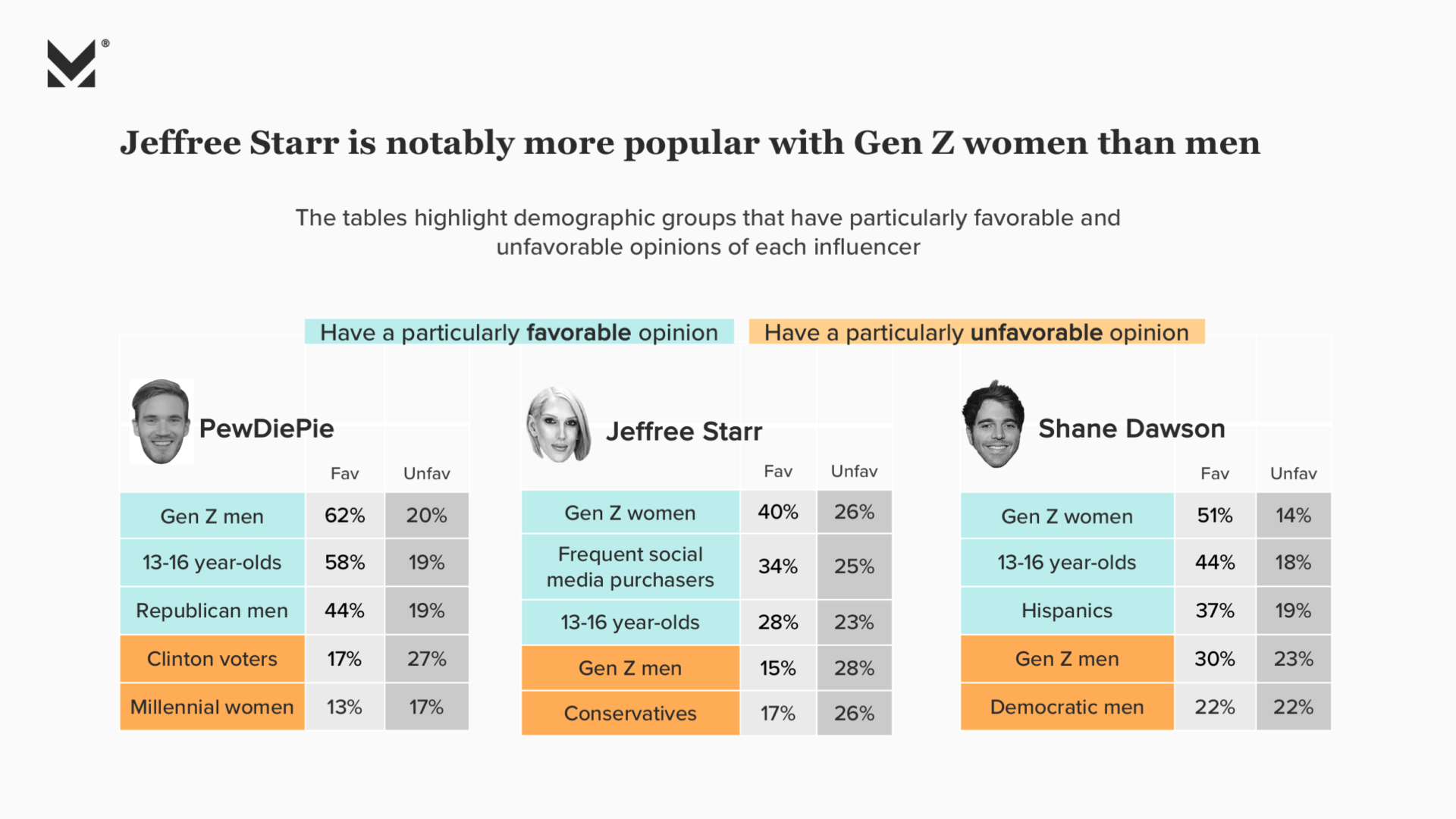 While not all YouTube stars are necessarily influencers, the platform is the most popular source for following influencers among Gen Z.

And increasingly influencers are a potent source of consumer behavior for young Americans.

-A twenty-four percent plurality of Gen Z women say influencers are where they most often learn about new products they want to purchase – significantly higher than word of mouth or TV advertisements, among other potential sources. 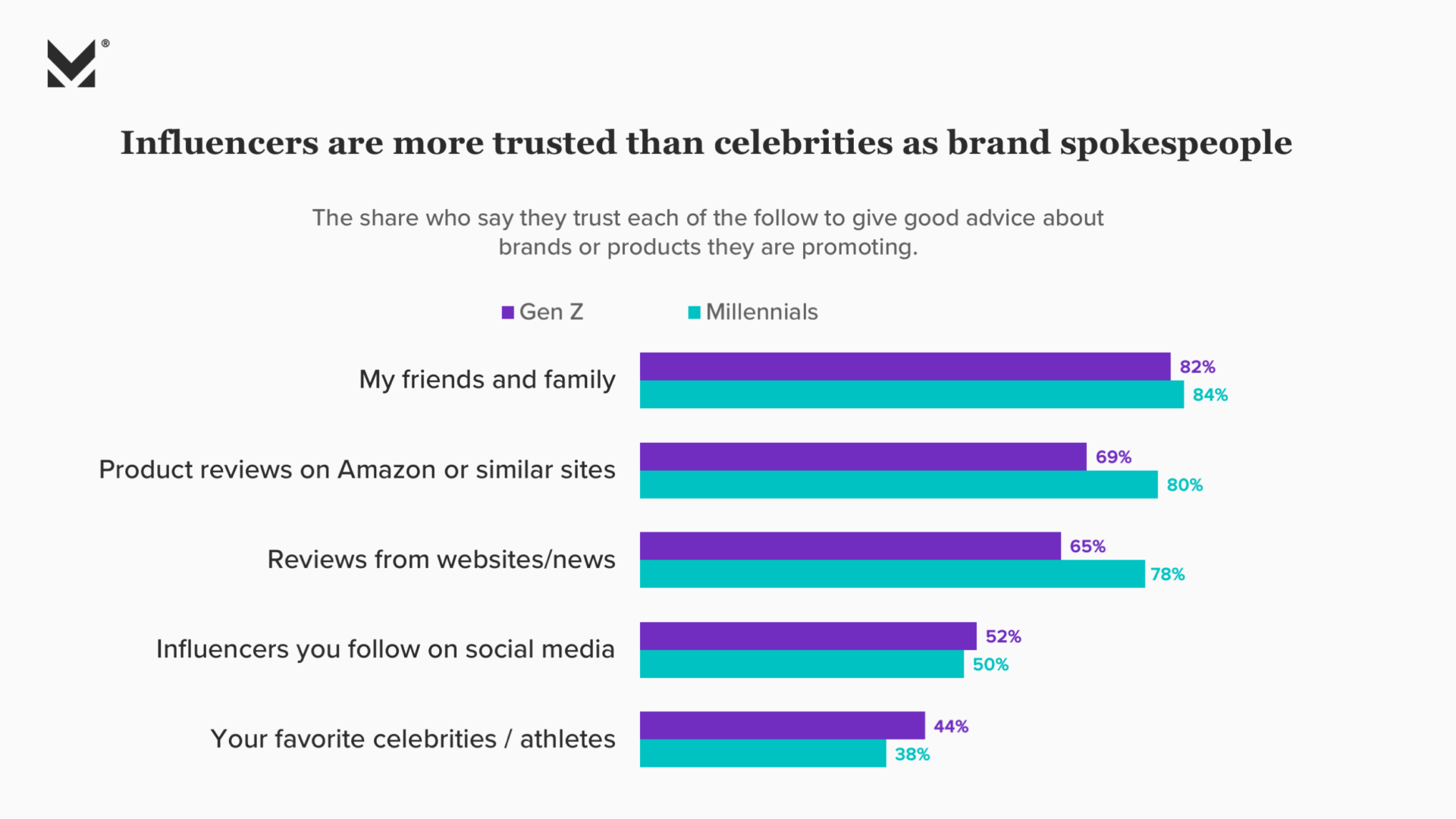 However, the trust young Americans have in influencers is still evolving. Just 12 percent say they have “a lot” of trust in influencer product recommendations, compared to 47 percent for friends and family, and 33 percent for reviews on websites like Amazon. That being said, they are more trusted than traditional celebrities and athletes.

As brands have been picking up on recently, younger consumers are savvy at identifying when sponsored posts are primarily transactional and when the influencer has sincere enthusiasm for the product they’re peddling.

-Furthermore, when asked to rate how important a series of fourteen factors are when considering whether to follow an influencer, having a large following was the least persuasive to Gen Z and Millennials, while authenticity was the most important.