“Saturday Night Live” has become a comedy institution and pop culture barometer in its more than four decades on NBC, providing a launching pad for comedic voices while also highlighting important pop culture figures. But for a variety show, there isn’t much variety — at least in the gender and racial makeup of the individuals it deems worthy of hosting the program.

A Morning Consult analysis shows that over the series’ 44 seasons, the makeup of the 894 hosts has been disproportionately white and male: Roughly 70 percent, or 627, have been men, and 89 percent, or 797, have been white. But experts say this homogeneity is emblematic of a larger issue — not only within the entertainment industry, but also within other power centers such as politics and business. 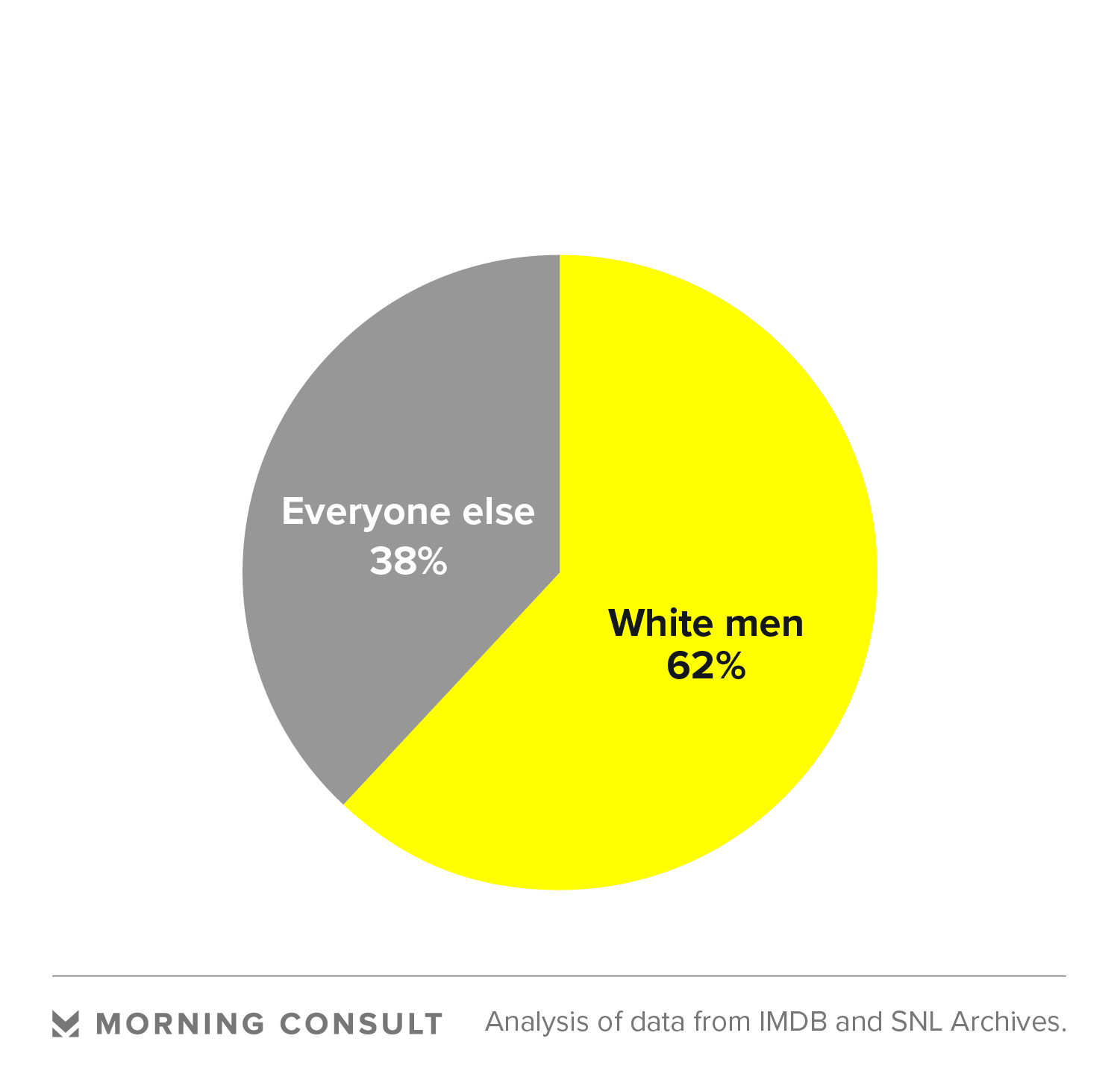 “There are bigger structural forces outside of ‘SNL’ and television itself that funnel certain voices into the comedy world and into politics and into positions of leadership at Fortune 500 companies,” said Nick Marx, an assistant professor of media and visual culture in the department of communication studies at Colorado State University and the co-editor of the book “Saturday Night Live and American TV.”

“I don’t know that ‘SNL’ is wholly unique in its overrepresentation of white men,” he said.

Throughout its early seasons, the target audience of “SNL,” which premiered in 1975, “wasn’t necessarily explicitly marked as white men but implicitly understood as such by the television industry,” he noted. That meant reverting “back to the norm that was implicit in their programming,” which at the time meant “comedy centered on whiteness and maleness.”

Matt Sienkiewicz, the other co-editor of “Saturday Night Live and American TV” and an associate professor in the communication department of Boston College, said that “SNL,” as a network program, needs to draw upon the ranks of the famous in order to attract a broad audience.

But over the sketch show’s 44-year run, the changing definition of fame has also altered the makeup and selection of hosts.

Sienkiewicz said that in the early days of the show, “the culture wasn’t so fragmented,” making it relatively easy to find a host that would be recognized by most Americans. But the expansion of consumable media has blurred the definition of “famous.”

“Things have changed tremendously in that there are more famous people, but famous people are less famous,” he said.

He cited the example of “Hamilton” creator and star Lin-Manuel Miranda, who hosted “SNL” in 2016.

“Half of the jokes in the opening sketch were that even though he was the most famous person possible for the people in the room, most of America has no idea who he is,” he said.

NBC did not respond to requests for comment for this story.

In 44 seasons, women have made up 29.9 percent of all “SNL” hosts, despite constituting more than half (50.8 percent) of the U.S. population, according to the U.S. Census Bureau. Men, who make up 49.2 percent of the population, have accounted for just over 70 percent of hosts. There have only been three seasons — Season 6, Season 26 and Season 29 — in which the number of female hosts equaled the number of male hosts in a season. Season 29 also saw a series high number of 11 women hosting.

Only 3 'Saturday Night Live' Seasons Have Had Gender Parity Among Hosts
Source: Analysis of data from IMDB and SNL Archives
Women
Men

People of color have also been underrepresented in the role of host when comparing their share of hosting duties to the proportion of the U.S. population that they represent. According to United States Census data, in 1980 11.7 percent of the U.S. population was African American, a number that has since risen to 13.4 percent. Over the course of the show, 7.3 percent of hosts have been black.

In the 1980 census, Asians and Pacific Islanders were combined into the same category and accounted for 1.5 percent of the population. In the most recent census, these groups were separated, with Native Hawaiian or Other Pacific Islanders making up 0.2 percent of the U.S. population, but representing roughly 0.7 percent of hosts, with only two different people in this group having hosted: Dwayne Johnson, who has hosted five times, and Jason Momoa, who has hosted once. Asian American individuals currently make up nearly 6 percent of the population but don’t even make up 1 percent of hosts. To date, no person of American Indian or Alaska Native descent has hosted.

The last few years have shown a slight increase in diversity when it comes to hosts: In the show’s 43rd season, which aired from 2017-2018, a record high of eight people of color hosted, before that number dropped down to six in the current season. As the entertainment industry becomes more diverse and individuals of all gender and racial identities find success — at the box office, on television, the athletic field, or wherever they work — “SNL’s” host choices could change.

Miki Turner, assistant professor of professional practice at the USC Annenberg School for Journalism, said that the number of white, male hosts doesn’t surprise her, given that hosts are typically brought in to promote an upcoming project. But she noted that it’s not just white men who make projects to promote, adding that “other people do things too.”

“People of color have films or television shows coming out,” and “SNL” should reflect that, she said.

Marx said the increase in diversity “is a reflection of our very fragmented media moment where no one figure captures the total zeitgeist.” He anticipates that the “show’s inability to find one super famous person that all people will know” will result in more host diversity.

Turner is more skeptical, noting the cyclical nature of the conversation in the entertainment industry.

“I’ve lived long enough to see these things come and go,” she said. But she noted that the past year in entertainment has seen people of color find success in various segments of the industry, such as Regina King’s Oscar win earlier this year.

“Is this the start of a trend or is this going to disappear in two years?” she asked. “I’m still kind of hesitant to embrace all of this change yet, but let’s hope I’m wrong.”