More political intelligence:
This page is no longer being updated. Get a sneak peek of the latest 2020 U.S. election HERE. 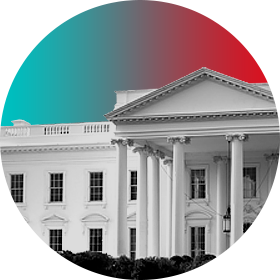 The figures are broken out among Democratic primary voters nationwide and 14 other demographics.

Hover over or click each line to track how support for candidates has changed week to week.

Respondents were asked whether they had a favorable impression of each of the following, and also had the option of saying they hadn’t heard of that person or had no opinion about them. Candidates are ordered by name recognition, and in the case of a tie, alphabetically by last name.

Favorable
Heard Of, No Opinion
Never Heard Of
Unfavorable

All registered voters were asked whom they would vote for if the 2020 presidential election were held today, each of the following or President Trump.

Each week, we will release a report with the most important findings on the 2020 election. Sign up to receive that report in your inbox here.

Our latest results are based on 30,985 surveys with registered voters, including 13,346 surveys with Democratic primary voters, conducted March 30 through April 5, 2020. The interviews were conducted online, and the data were weighted to approximate a target sample of registered voters based on age, race/ethnicity, gender, educational attainment, and region.

The “Hypothetical General-Election Matchups” section displays responses among all registered voters — not just those who indicated they may vote in the Democratic primary or caucus in their state — and those matchups also have a margin of error of plus or minus 1 point.

In the case of a tie, candidates are ordered alphabetically by last name.

Sign up to receive this data in your inbox every week
Featuring deeper insights into the latest survey data and how the 2020 presidential race is shaping up.