In a Number of States Hit Hard by the Latest Wave, Vaccine Skepticism Has Barely Budged

Morning Consult is conducting around 40,000 weekly survey interviews in the United States on the vaccine rollout, providing deep insights at a granular level into which segments of the population are most and least opposed to vaccinations, and what factors are driving skepticism. The latest data is based on surveys conducted from August 17-23, 2021, among 45,604 U.S. adults, with a margin of error of 1 percentage point. Updates will be provided monthly. Get alerts with the latest data.

In a number of states hit hard by the latest wave of COVID-19, vaccine skepticism has barely budged: Across the Southeast and Midwest, cases have surged dramatically over the last month and a half. While that has led to a decline in vaccine skepticism in certain hard-hit states, in others – like Georgia, South Carolina and Tennessee – levels of skepticism remain virtually unchanged. View more.

After stalling in July, vaccine hesitancy in the U.S. ticked down to 28% in August: In the latest survey, 18% of U.S. adults say they are opposed to getting vaccinated, and 10% are still uncertain about the decision. The share of Americans who are opposed to getting vaccinated has dropped by just 3 percentage points since tracking began in mid-March, from 21% to 18%. View more.

Topline tracking: Overall, 64 percent of Americans said they had received at least one shot, 8 percent plan to get vaccinated, 10 percent are uncertain whether they will be, and 18 percent do not plan to get one.

Get alerts with the latest data.

The most recent data shows that 26 percent of Republicans do not plan on getting vaccinated, the highest level of any major demographic group. Older Americans, Democrats and more well-educated adults are less likely to oppose getting vaccinated. 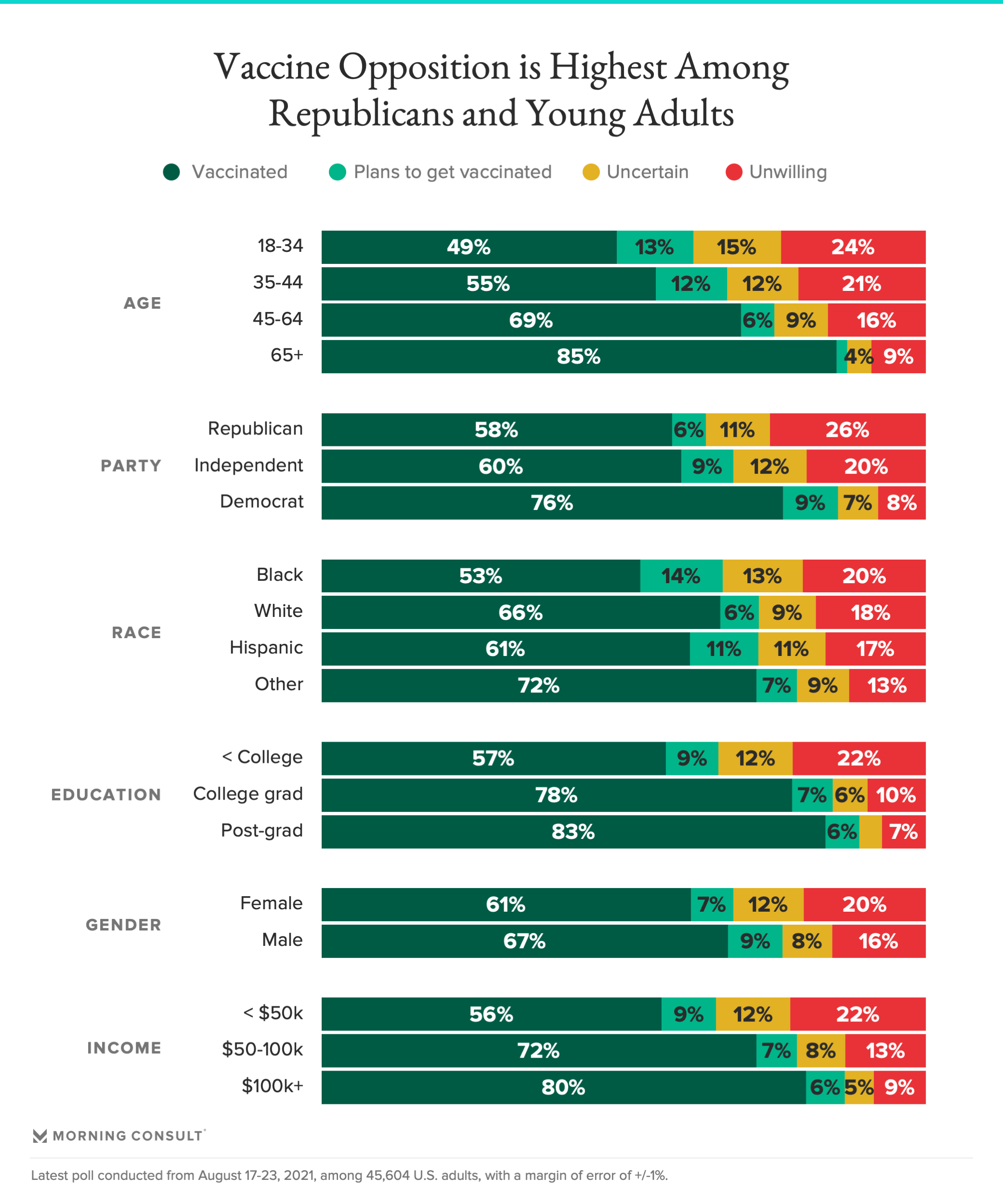 One of the most significant pockets of vaccine skepticism is among Republican women, 43 percent of whom are either unwilling to get vaccinated or are uncertain. That share is notably higher than for either Republican men or Democratic women. 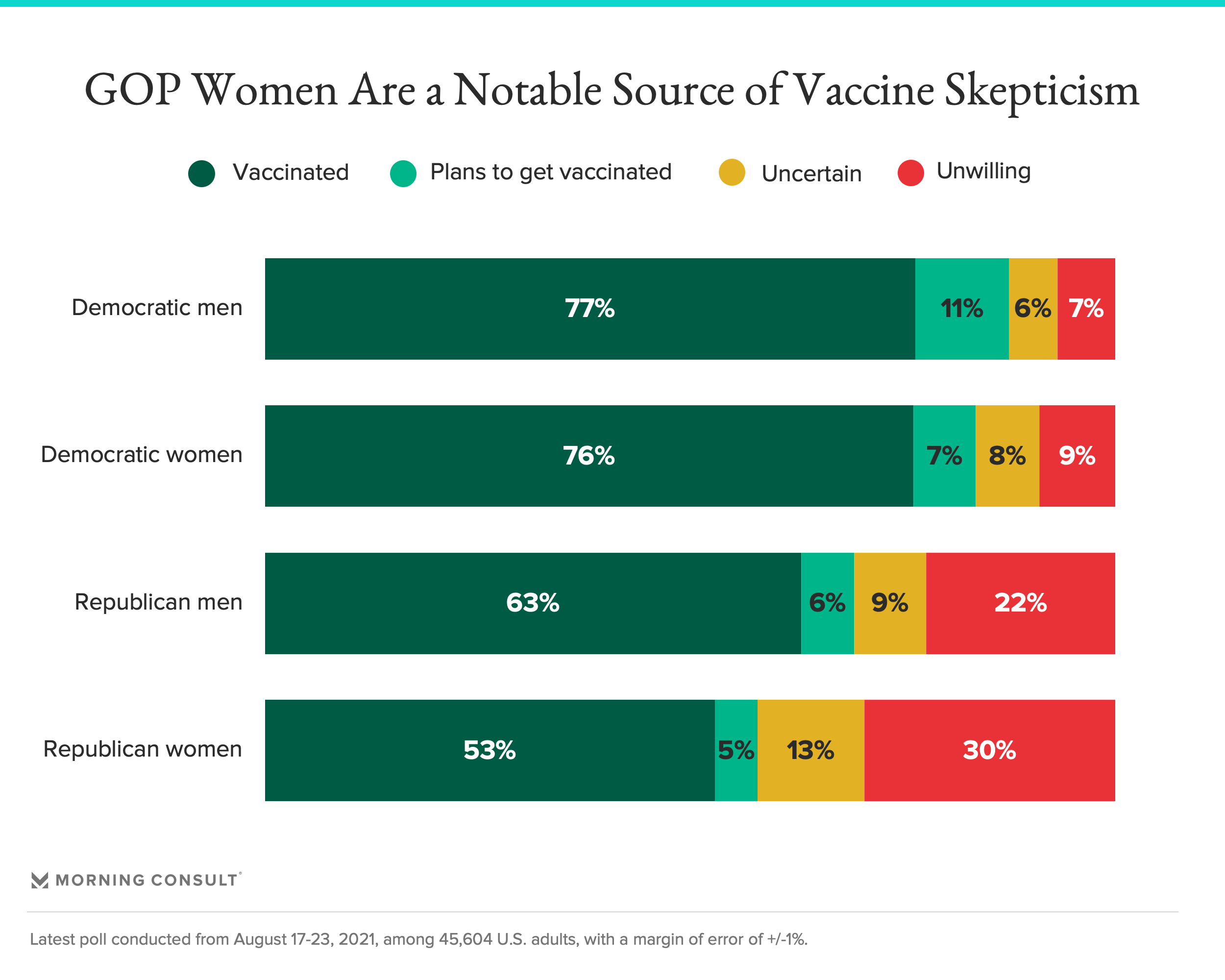 At Every Age Group, Higher-Income Earners are More Willing to get Vaccinated 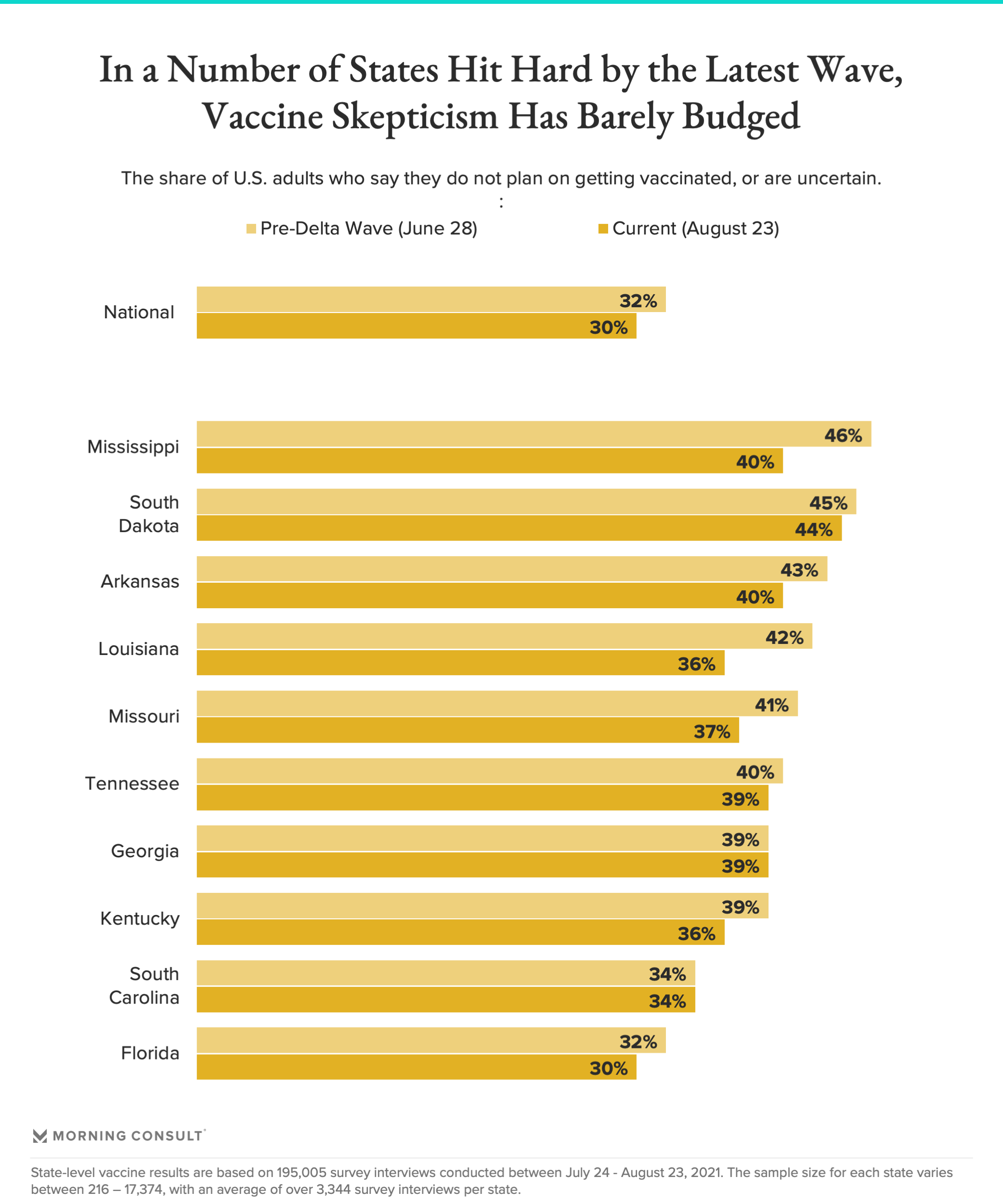 Rates of Vaccine Opposition by State

The share of adults in each state who say they do not plan on getting vaccinated: 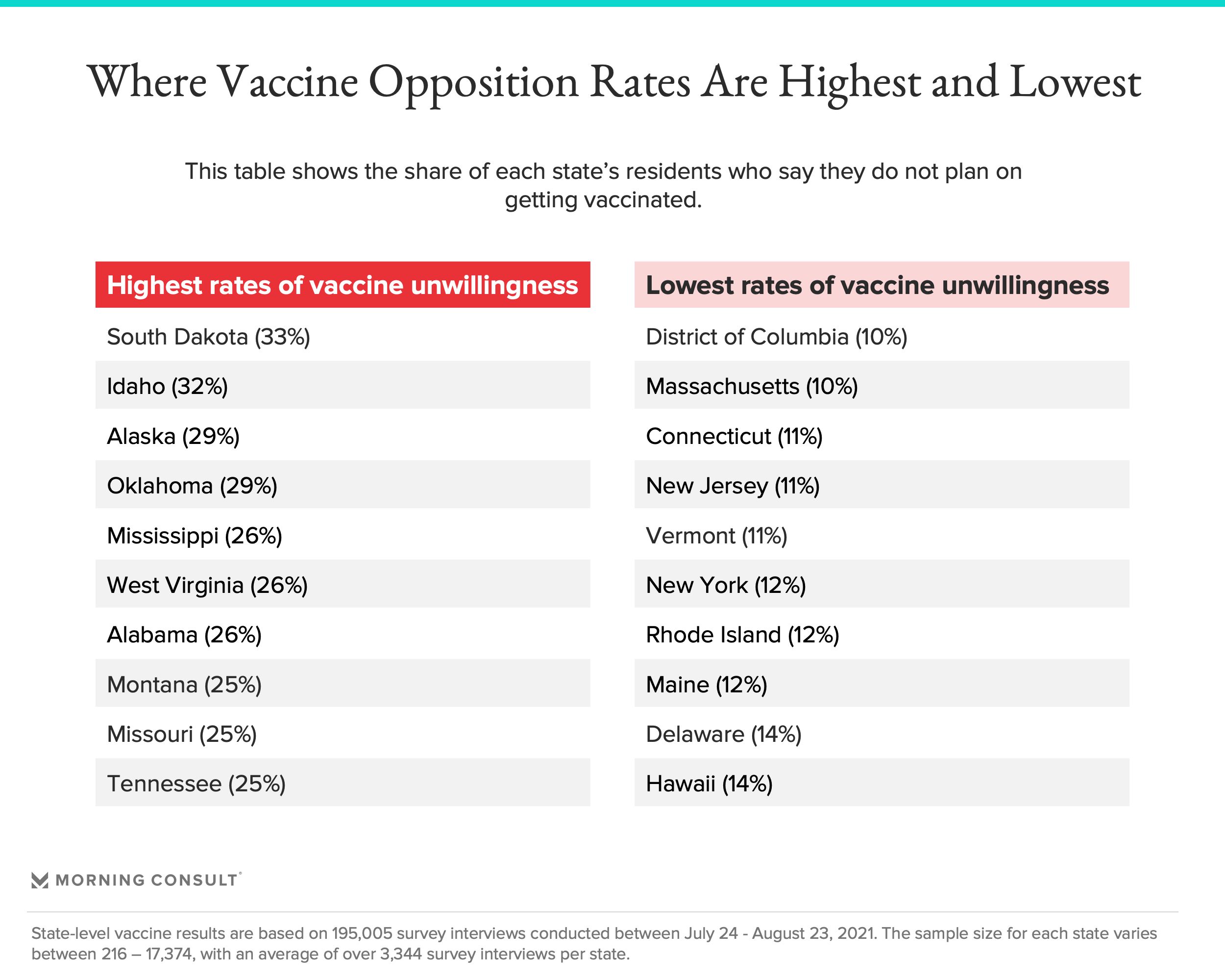 Since Morning Consult began tracking in mid-March, the share of total vaccine skeptics (uncertain plus unwilling) has dropped from 39 percent to 28 percent of the adult population. 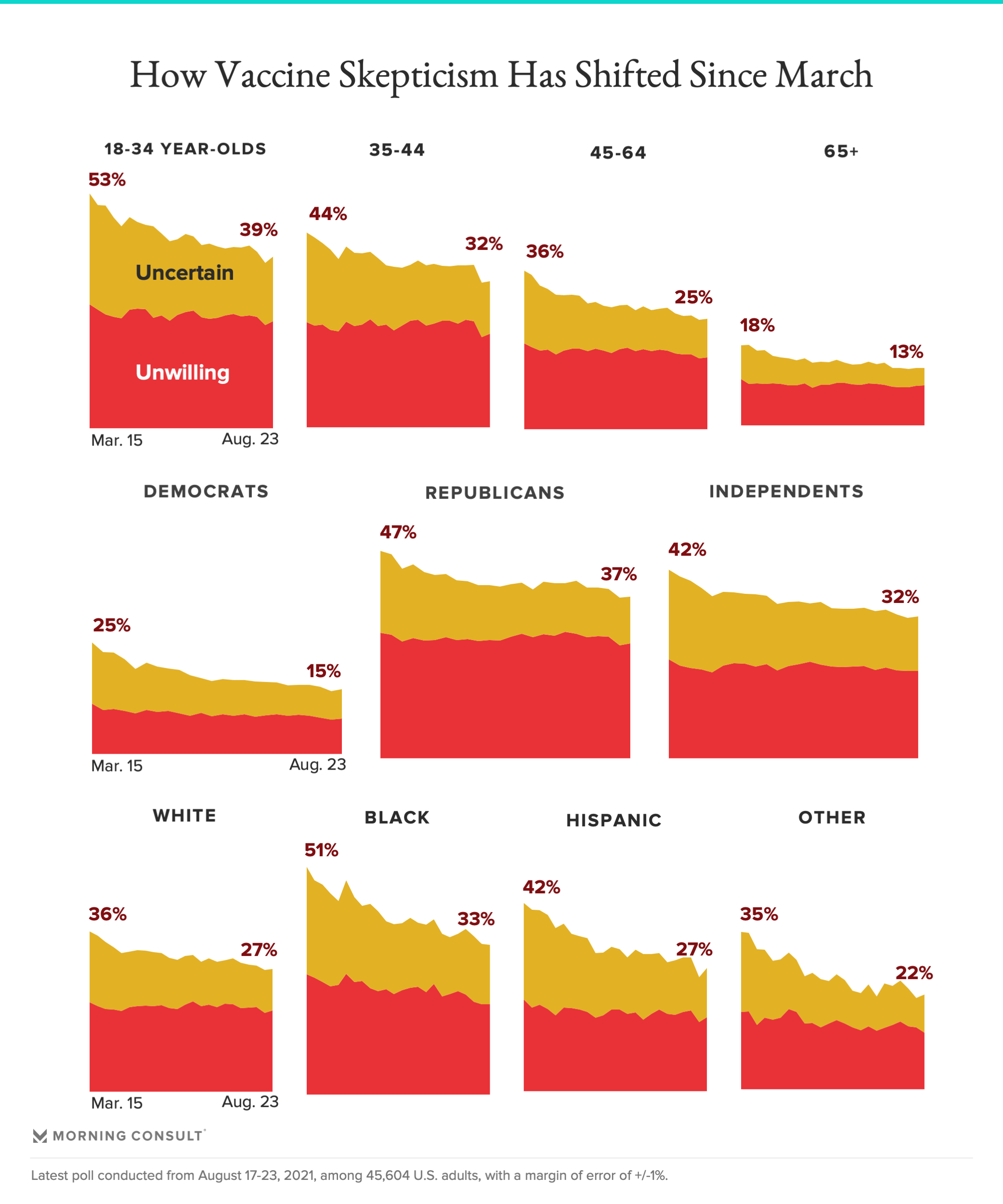 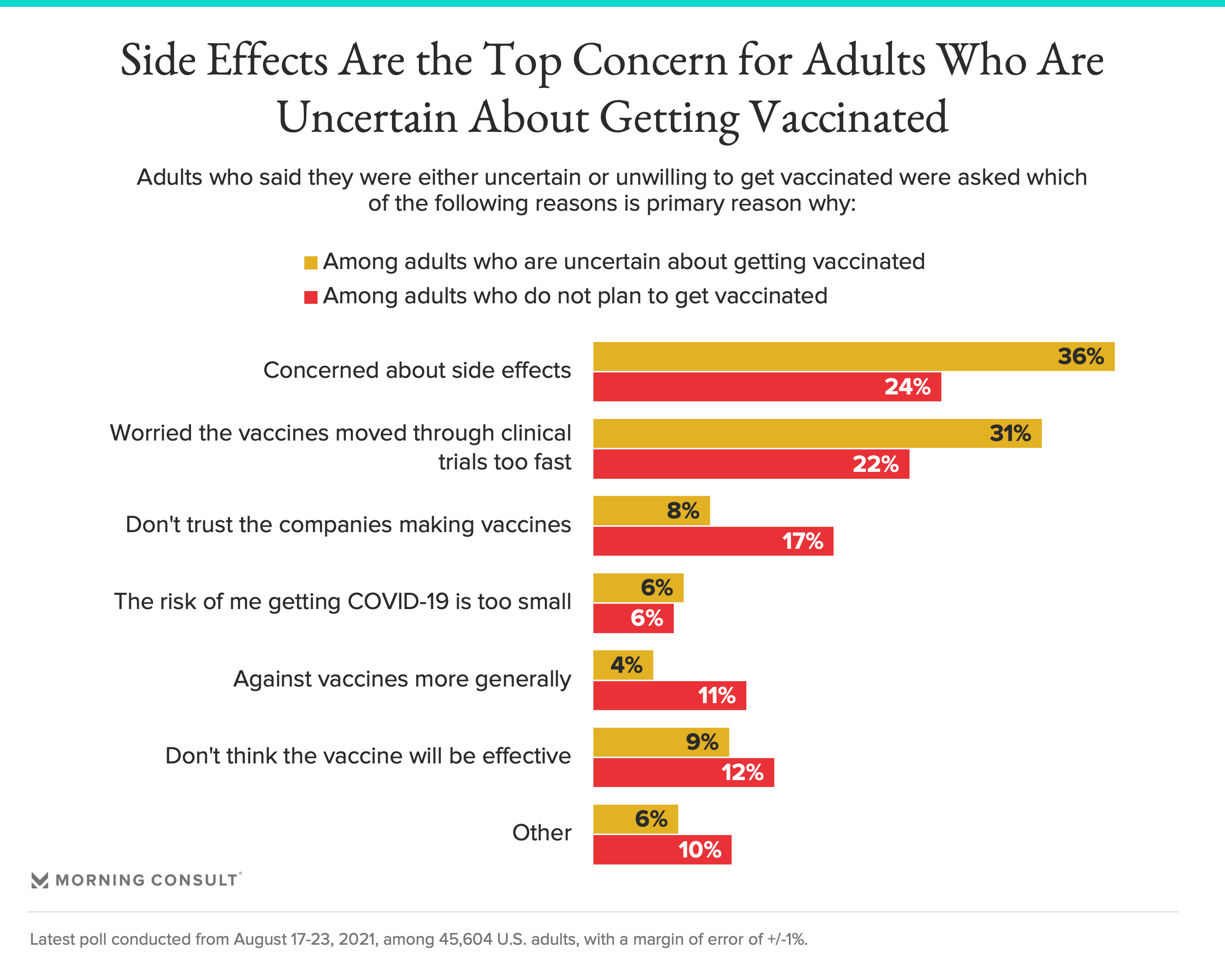 Among just those who are uncertain about getting vaccinated, their reasons are largely similar across a wide range of different demographic groups. 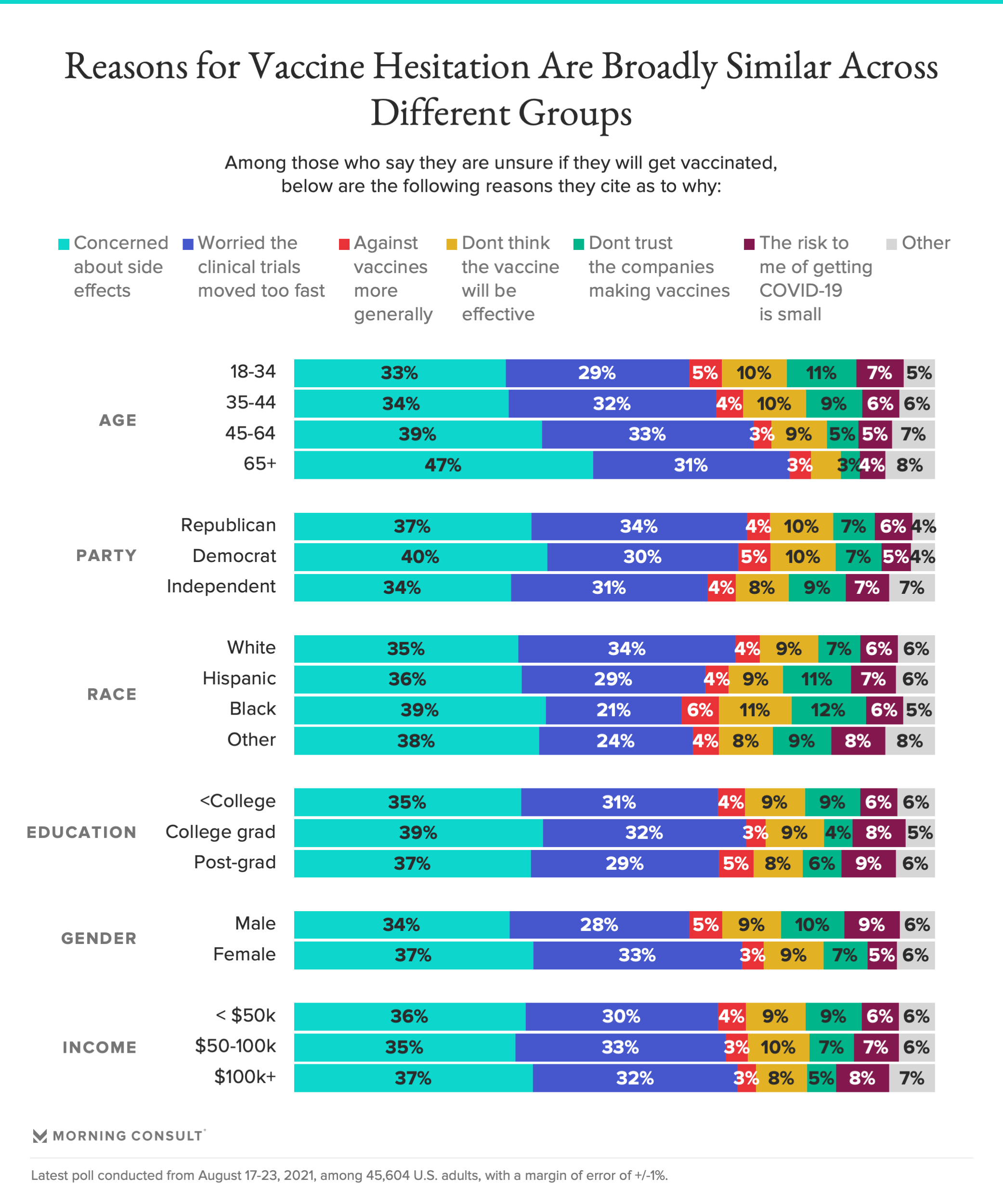 Over the last month, the share of vaccinated 18- to 34-year-olds has ticked up by 4 percentage points.

The share of adults who say they have received at least one dose:

Looking just at those Americans who are willing to get vaccinated (either have been or plan to get vaccinated), the data shows that almost 9 in 10 U.S. adults have already received at least one dose. However, there are notable demographic differences, particularly along age, racial and income lines. 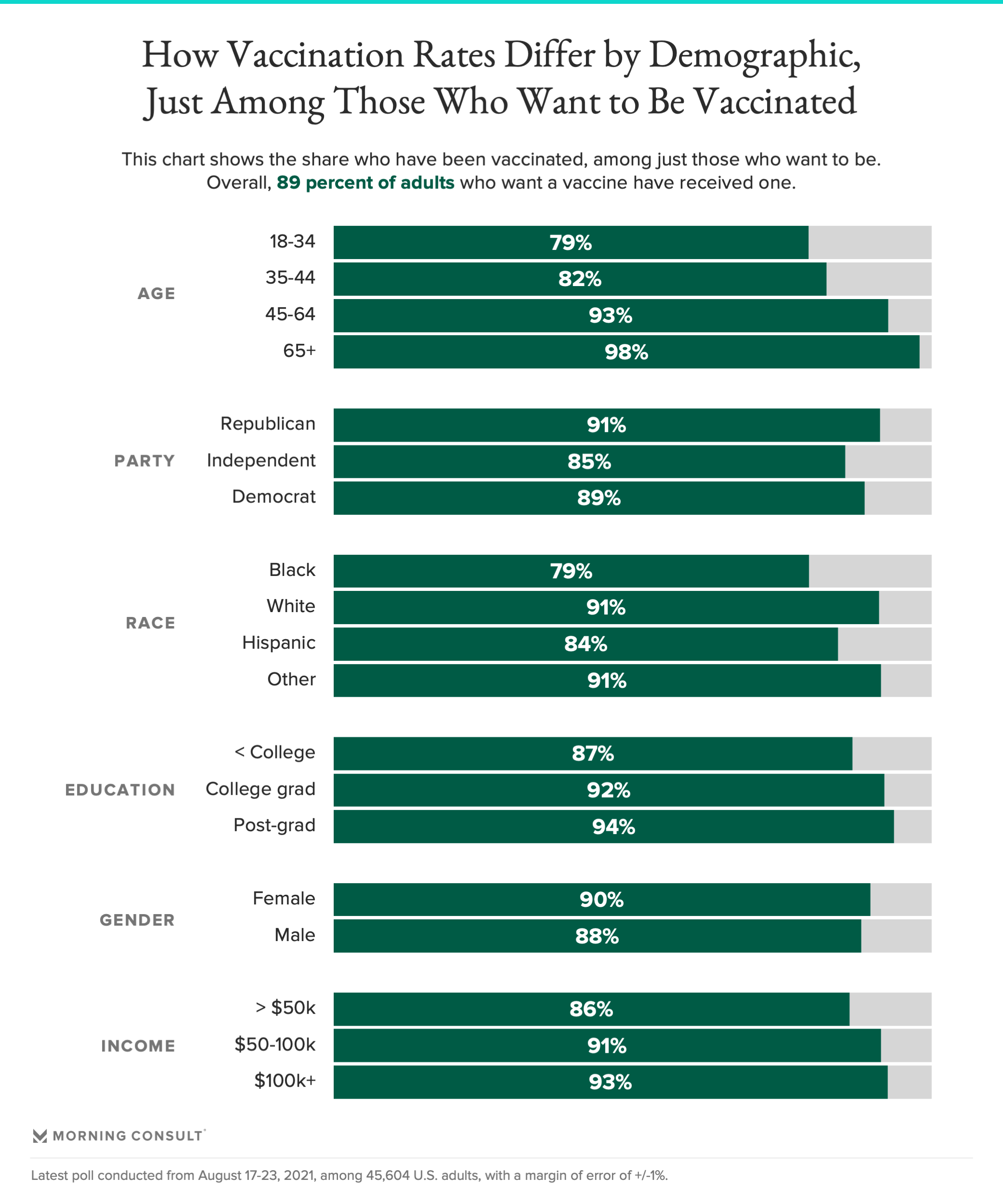 Morning Consult conducts daily interviews with over 6,000 respondents in the United States. The interviews are conducted online through multiple nationally recognized vendors. Morning Consult uses a stratified sampling process based on age and gender to reach a broad, nationally representative audience in each country. Daily responses are weighted to approximate a representative sample of adults based on U.S. census data.