On a similar timeline, support for gun control remains higher than after Las Vegas shooting 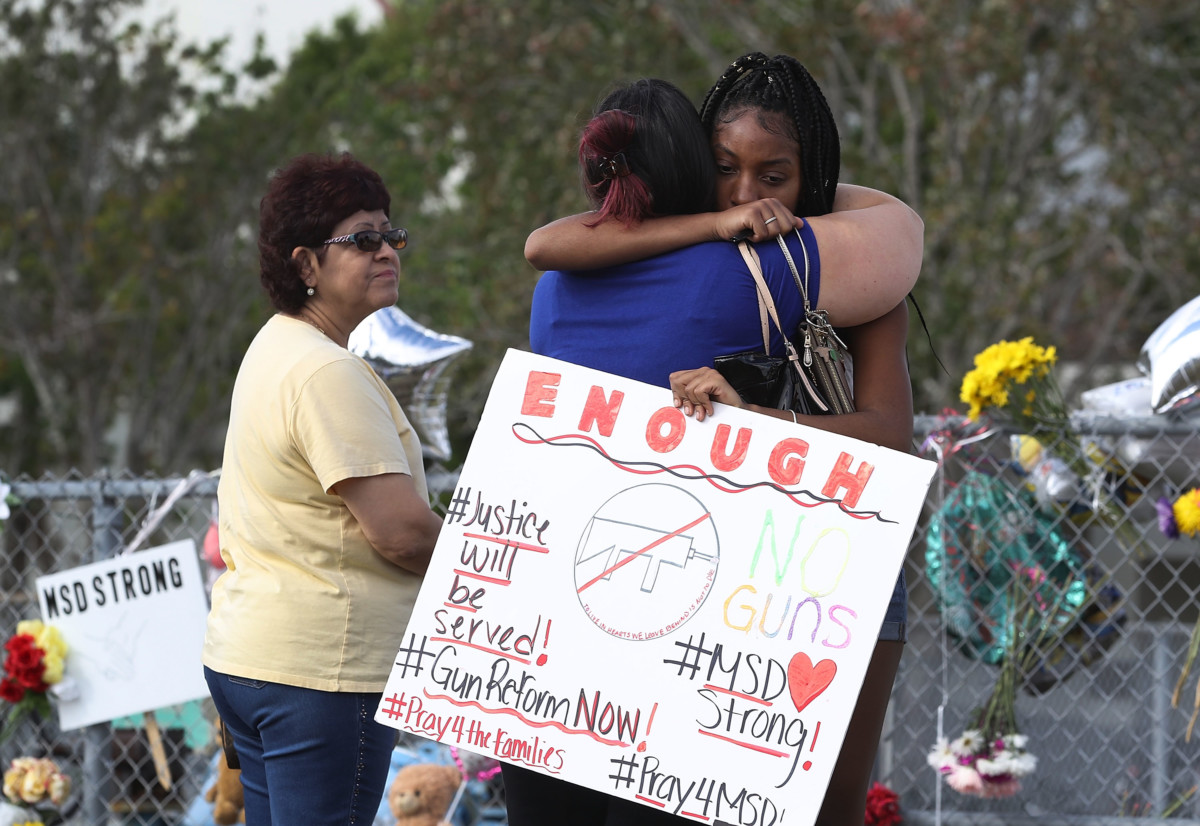 Tyra Heman a senior at Marjory Stoneman Douglas High School, on Feb. 19 holds a sign that reads, "Enough No Guns," as she is hugged in front of the school where 17 people were killed, in Parkland, Fla. (Joe Raedle/Getty Images)
By Cameron Easley

There have been dozens of mass shootings in the United States over the past year, but one in particular sticks in the minds of Americans: Marjory Stoneman Douglas High School in Parkland, Fla. That shooting was different, proponents of gun reform say, as the news cycle has endured and as the teenage victims-cum-activists have remained in the headlines.

That line of reasoning is supported by recent Morning Consult/Politico polling data that shows the voting public’s appetite for stricter gun measures is surpassing its staying power when compared with fallout from October’s Las Vegas shooting — the deadliest mass shooting in modern U.S. history.

Support for stricter gun control measures fell by as many as 4 percentage points among Democrats, independents and Republicans between an Oct. 5-9 survey — taken after the Oct. 1 shooting in Nevada left 58 dead and hundreds more injured — and another conducted from Nov. 9-11. By comparison, as Parkland students have remained in the spotlight following the Feb. 14 attack that took the lives of 17 people, support for enhanced restrictions on gun ownership has increased. 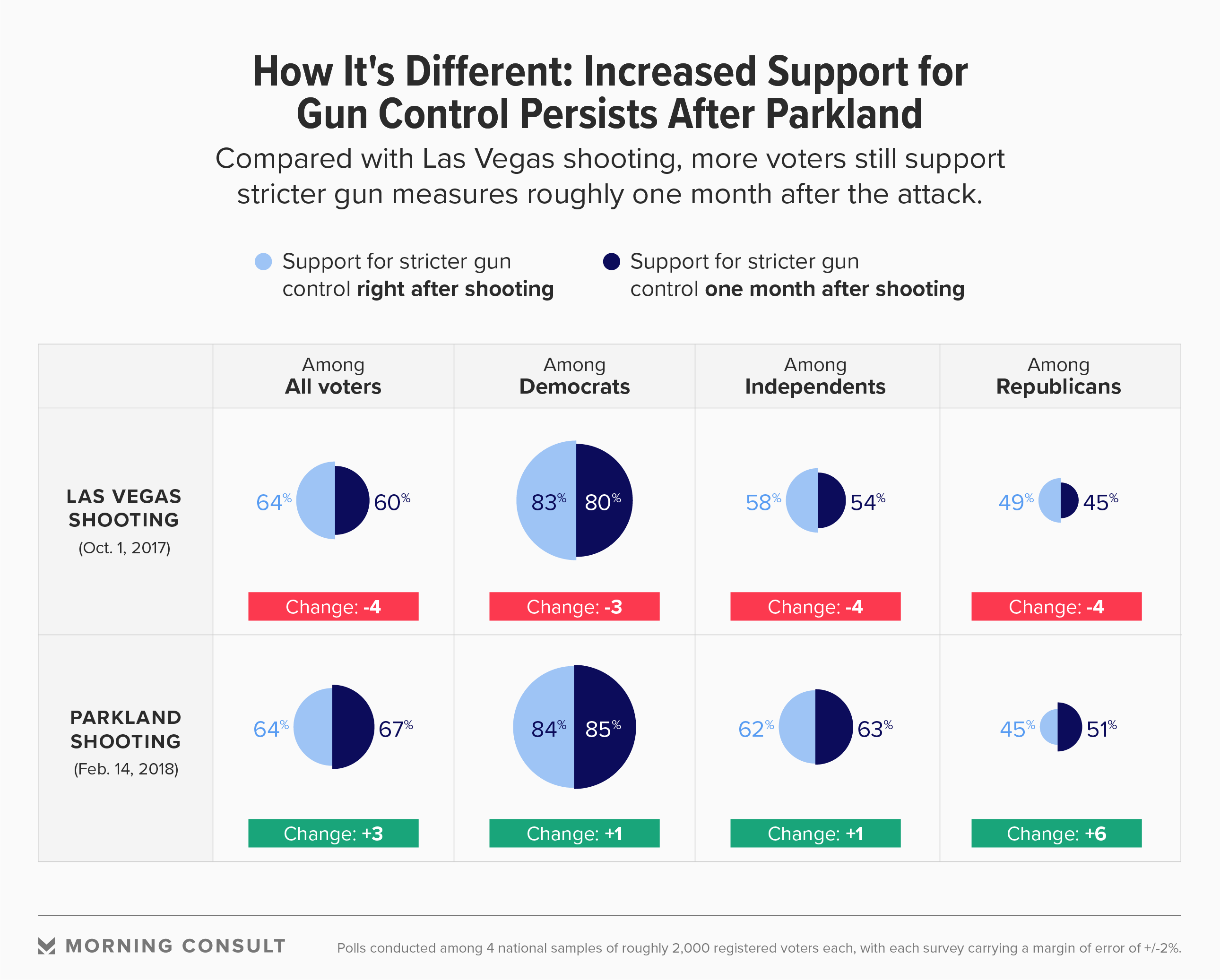 Sixty-seven percent of respondents in a March 29-April 1 Morning Consult/Politico survey of registered voters — conducted days after the March for Our Lives rally in Washington on March 24 — said they backed stricter gun control measures, compared with 64 percent who said the same in a Feb. 20 poll. Support among Democrats is now 1 percentage point higher, at 85 percent, with an equal increase among independents bringing their support to 63 percent, while 51 percent of Republicans said they backed more stringent regulations on guns, up 6 points from the February survey.

Clyde Wilcox, a Georgetown University professor and co-editor of the book “The Changing Politics of Gun Control,” said Parkland’s comparative permanence in the mind of the public is largely a function of the work done by the Stoneman Douglas students.

“The fact that these teenagers have mobilized, and have started marching, and have started being on TV and framing the narrative, is something that has really helped to swing public opinion to the extent it’s swung,” he said in a Tuesday interview.

The fallout from the Las Vegas shooting resulted in no policy change at the federal level, but the increased spotlight on the issue following Parkland helped advocates of more stringent gun regulations secure a big victory in Vermont — limiting magazine sizes, expanding background checks, raising the purchasing age to 21 and banning bump stocks — while also successfully pressuring Florida Gov. Rick Scott (R) to sign legislation that raises the rifle-purchasing age from 18 to 21, implements a three-day waiting period and bans bump stocks.

Lawmakers on Capitol Hill passed legislation that strengthened the National Instant Criminal Background Check System and authorized the Centers for Disease Control and Prevention to study gun violence — provisions that were signed into law by President Donald Trump.

Buoyed by public opinion, those advocates want more done. And with Congress unlikely to take up any significant gun legislation ahead of the midterm elections in November, proponents are looking to voters to make that a reality.

Voters who want more firearm regulation “are making the gun issue one that is central to their voting decision” in a way that hasn’t been seen before, said Avery Gardiner, Brady Campaign to Prevent Gun Violence co-president, in a Tuesday interview.

Majority support for enhanced gun control endures in the wake of Parkland — but when it comes to who voters trust more on the issue of gun policy in general, partisan battle lines are evident. Even as support for stricter regulation has persisted, there’s been little to no movement in the direction of congressional Democrats on the topic. Voters are nearly split on the issue, with large consolidation on each side of the aisle, along with a clean division among independents. 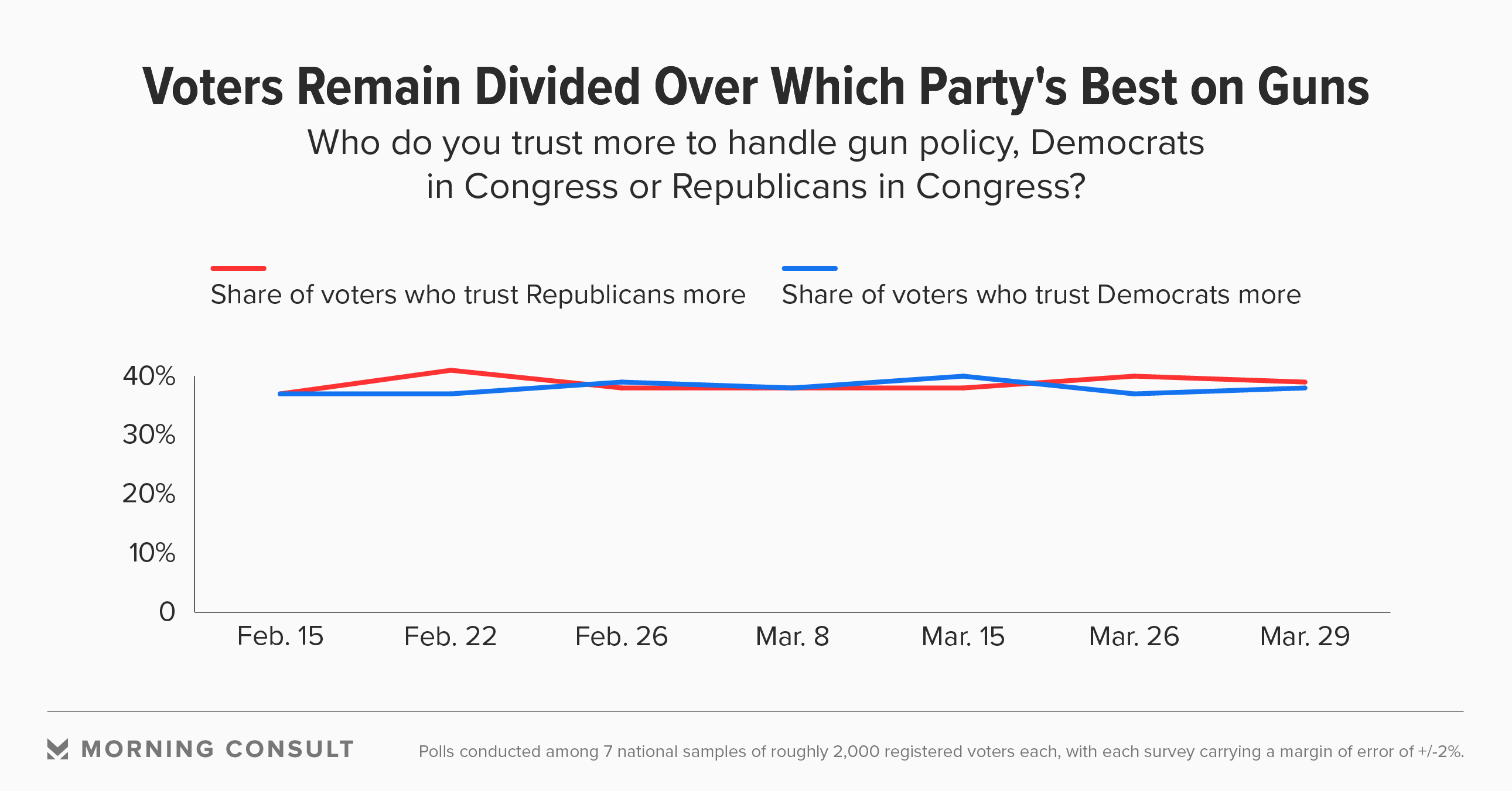 Among gun owners, 56 percent trust congressional Republicans, compared with 24 percent who trust Democrats more, according to the most recent survey. Former Republican National Committee spokesman Doug Heye said how those voters react to the in-your-face tactics of some of those Parkland students — in addition to calls for the Second Amendment’s repeal, such as the one made by former Supreme Court Justice John Paul Stevens last week — will likely go a long way in deciding which side has the edge on the issue.

“What is the backlash on this? How much does this motivate or incentivize gun owners — who we know use this as a voting matter,” he said in a Tuesday interview.

Sixty-eight percent of gun owners and 71 percent of Republicans in the recent poll said they strongly oppose repealing the Second Amendment. Meanwhile, repeal is not much of a priority for the left: Twenty-two percent of Democrats said they strongly supported what Stevens called for in his March 27 New York Times op-ed.

A tell-tale sign of which side has the upper hand on the debate going into the midterms, Heye said, would be whether Democratic candidates in swing districts make gun control central to their campaign pitches.