How #MeToo Impacts Viewers’ Decisions on What to Watch

Survey finds allegations of sexual misconduct or assault against an actor have limited influence on U.S. audience

The #MeToo movement has effectively directed a glaring spotlight on the media and entertainment industries as dozens of actors and other powerful industry figures have been accused of sexual misconduct and assault, with allegations ranging from unwanted advances to rape.

In response to the reputational and financial risks associated with these allegations, many production companies and studios have downplayed these actors’ roles in films and television shows or even recast roles and reshot scenes after dismissing them from production.

But for the first time, a new national survey by Morning Consult shows the potential fallout from #MeToo allegations may be limited, at least as it pertains to the public’s viewership habits.

The survey asked respondents how much more likely they are to see a film or television series if its trailer included a specific actor, then gauged whether allegations of sexual misconduct would impact that decision.

Of the 20 entertainers listed in the poll, allegations against only two — Kevin Spacey and Louis C.K. — spurred more people to say their viewership habits would change as a result.

After actor Anthony Rapp accused Spacey of making sexual advances when Rapp was a minor, Spacey said via Twitter that he didn’t remember doing so but apologized if he had. Louis C.K. said accusations of inappropriate sexual behavior were true in a statement to The New York Times, and expressed regret for his behavior.

As for the other 18 men, including 2017 Best Actor Oscar winner Casey Affleck and “Deadpool 2” actor T.J. Miller, the data shows that the allegations appear to have a much lesser impact on viewers’ decision to watch these actors’ work.

Most of the men accused of these sexual offenses have denied the charges against them. The 20 actors listed in the survey did not respond to Morning Consult’s request for comment or declined to comment.

Related: The 20 Entertainers in #MeToo Chart: Allegations and Responses

Experts disagree on whether studios should be concerned about whether consumers would turn away from actors accused of sexual misconduct.

In those cases, he said, a studio should have a conversation before starting or continuing its relationship with the actor, but he also pointed out that Americans have a short memory in general.

“Time is your best friend,” he said in the May 18 phone interview.

Deraney cited the example of Mel Gibson, whose anti-Semitic and racist rants in 2006 and 2010, respectively, made him box office poison in the eyes of many industry observers. Yet Gibson earned an Oscar nomination for best director last year for his 2016 film “Hacksaw Ridge,” which made more than $67 million domestically and more than $175 million worldwide, according to Box Office Mojo.

Susan M. Tellem, a partner at the Los Angeles public relations firm Tellem Grody PR Inc., had a different view of the data on Tambor, saying studios have no need to be concerned, noting the other side of the equation: that about 4 in 10 said their viewership of Tambor’s work would not change.

“The American public is pretty forgiving when it comes to bad celebrities,” she said, especially if the actor was a favorite of theirs before allegations surfaced.

A lot is weighted in the severity of the allegations, Deraney said, but with time, consumers are going to forget or even become receptive of “your side” of the story.

Notably, when asked generally about shows or films starring unnamed actors facing #MeToo allegations, nearly half (47 percent) of respondents said they were less likely to tune in, while 34 percent said such allegations made no impact on their viewership. Nine percent said they’re more likely to watch. Attitudes became more lax when specific actors and shows were named.

The survey came just ahead of Tuesday’s season five premiere of “Arrested Development” on Netflix, starring Tambor, who will stay with the series despite being dismissed in February from his lead role on Amazon Studios’ “Transparent” after accusations of sexual harassment surfaced.

But it appears consumers largely don’t care what studios do either way. 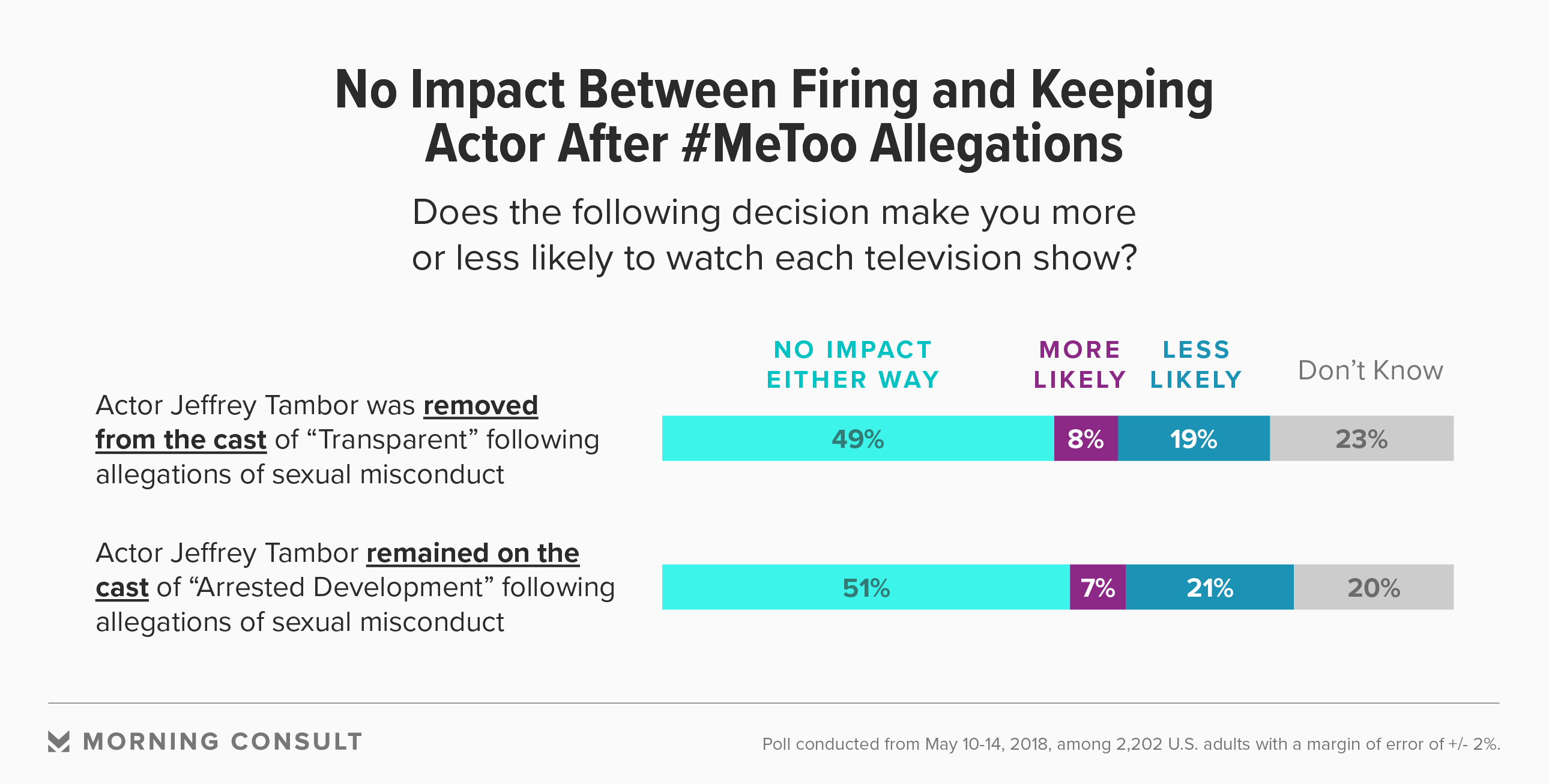 Most respondents (71 percent) said Netflix Inc.’s decision to keep Tambor on “Arrested Development” would make no impact on their viewership or offered no opinion on the matter.

But a nearly identical percent (72 percent) said the same of Amazon Studios’ decision to remove Tambor from “Transparent.” The survey was in the field before The New York Times’ revealing sit-down with the “Arrested Development” cast, in which Tambor’s inappropriate on-set behavior toward co-star Jessica Walter was discussed -— a conversation for which Jason Bateman and other co-stars apologized after their comments were seen by many readers as excusing Tambor’s actions.

“People forget, forgive, or don’t even know” of allegations against these actors, said Tellem.

Indeed, in the Morning Consult poll, Spacey was the only entertainer in which a majority said they had heard a lot or some about the allegations against him.

These survey results bode well for celebrities and the entertainment industry overall, public relations experts said, who credit the avalanche of #MeToo headlines along with the fast-paced nature of social media as part of the reason the public doesn’t catch each accusation of misbehavior.

“There have been so many allegations that have come to light in recent months that quite literally we can’t keep up with them all,” said Evan Nierman, founder of the public relations and crisis management firm Red Banyan, in an interview on May 21.

Eight women are now accusing actor Morgan Freeman of inappropriate behavior, including unwanted touching and harassment, per a May 24 CNN report, published after the Morning Consult polling wrapped.

These results also mean there is a clearly paved road to redemption for many of these actors, experts said.

The range of reported abuses for the 20 men surveyed is also quite wide, and experts said the public may be willing to forgive what they see as less serious incidents. And they reiterated that many of these allegations are just that: allegations.

But there is one subgroup that entertainment officials should be mindful of: frequent moviegoers, or those who go to the theater at least once a month and rent a film at home once a month.

That valuable group tends to be more likely to say than the overall population that the allegations would impact its viewership of the work of each of the 20 entertainers.

But frequent television watchers, or those who watch five or more shows per week, are far less likely than moviegoers to say there would be an impact.

Netflix and Amazon Studios did not return requests for comment. The Motion Picture Association of America declined to comment, and the Screen Actors Guild and the American Federation of Television and Radio Artists said it does not comment on observations regarding particular actors and directed Morning Consult to its Four Pillars of Change initiative to create a safe working environment.

Sam Sabin contributed to this story.