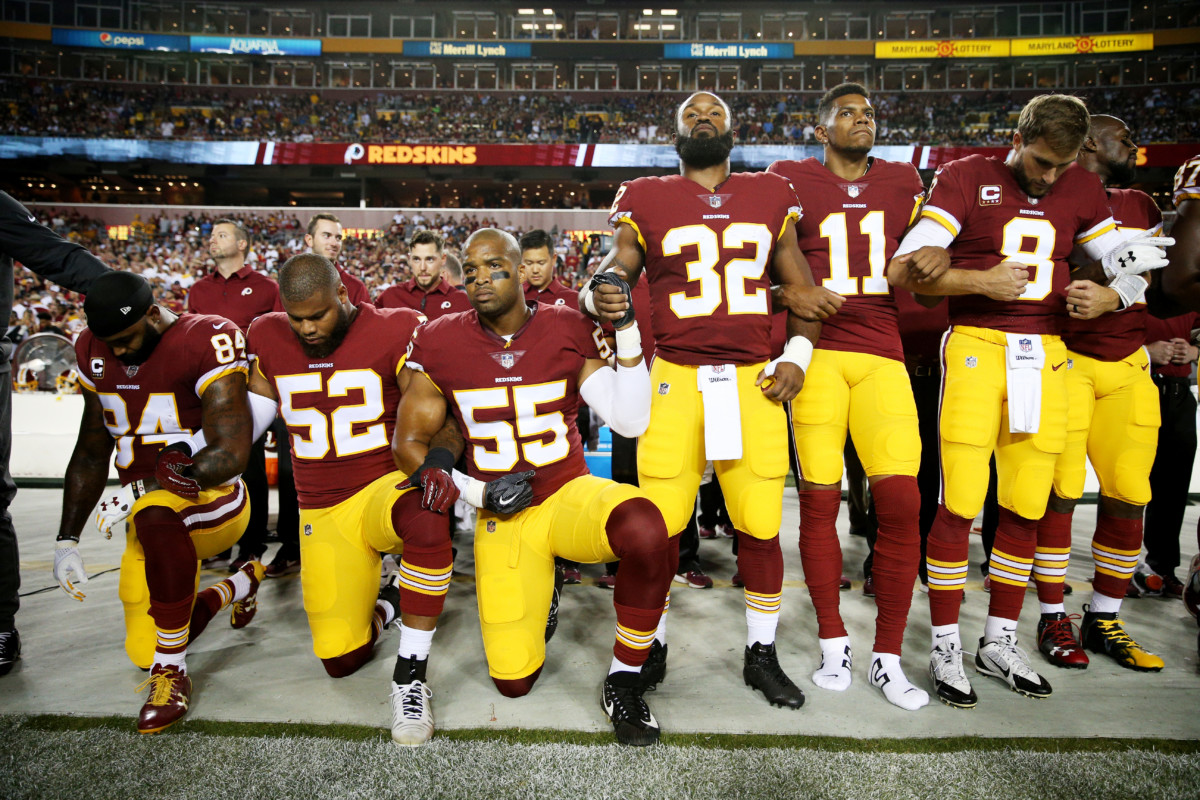 Washington Redskins players during the the national anthem before the game against the Oakland Raiders at FedExField on September 24, 2017, in Landover, Maryland. (Photo by Patrick Smith/Getty Images)
By Sam Sabin

Since former San Francisco 49ers quarterback Colin Kaepernick kneeled during the national anthem in 2016 to protest police violence, the National Football League has drawn intense criticism, including from President Donald Trump, for allowing players to kneel on the field.

On May 23, the NFL announced a new policy requiring all players to either stand on the field during the national anthem or remain in the locker room, and anyone who kneels on the field risks incurring fines for his team. The policy has the backing of 53 percent of U.S. adults, according to a new Morning Consult/Politico poll, while 32 percent said they opposed the move, and 15 percent said they didn’t know or had no opinion. The poll surveyed 2,201 U.S. adults from May 23-29 and has a margin of error of 2 percentage points.

Whether the NFL will be successful in quelling the controversy remains to be seen, with sports industry experts saying the new policy could serve as a vehicle to fuel even more divisiveness on the issue.

Trump expressed his approval of the new NFL policy, saying during a May 24 interview on “Fox & Friends”: “I don’t think people should be staying in the locker rooms, but still I think it’s good. You have to stand proudly for the national anthem, or you shouldn’t be playing. You shouldn’t be there. Maybe you shouldn’t be in the country.”

Republicans are the biggest supporters of the new policy, with 80 percent approving, according to the poll, and 60 percent saying they “strongly approve.”

Since the last time Morning Consult polled on the issue on Sept. 27-28, 2017, opposition to players’ protests has risen among independents and Republicans. 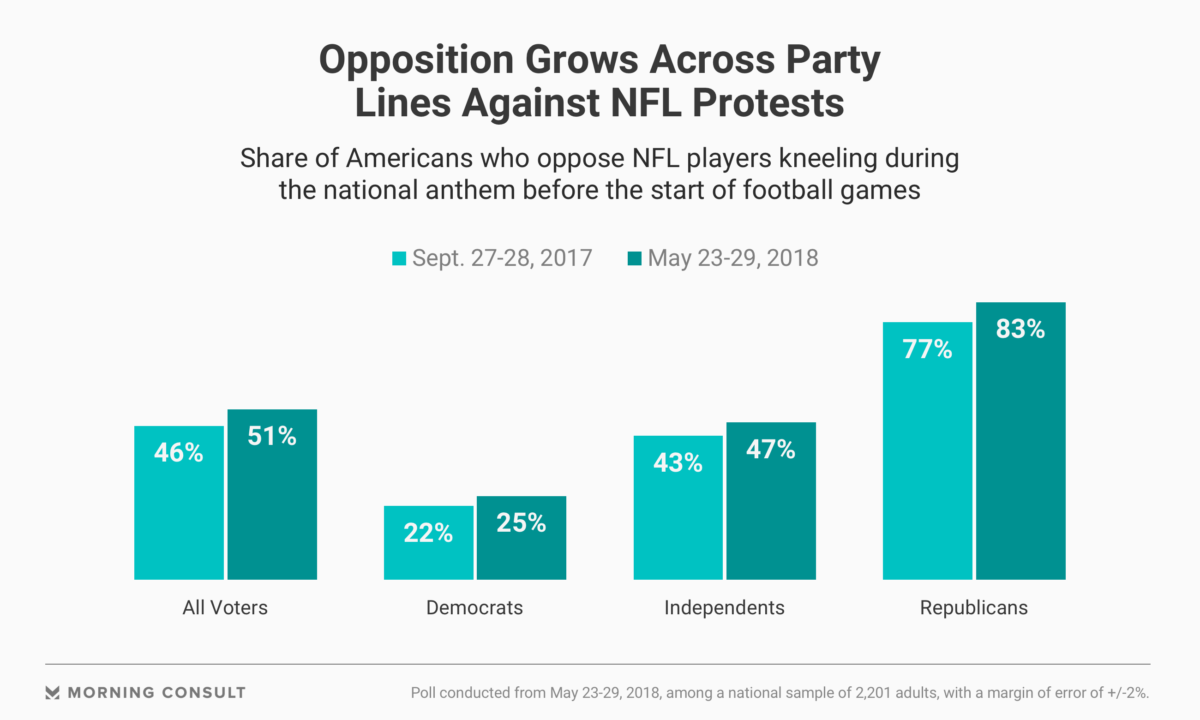 Among Democrats, opposition to the protests stayed about the same compared to September: 25 percent in the May poll (with a subsample margin of error of 3.1 percentage points) and 22 percent in the September poll.

David Carter, executive director of the Sports Business Institute at the University of Southern California, said the NFL’s new policy most likely won’t change anyone’s views on the matter. 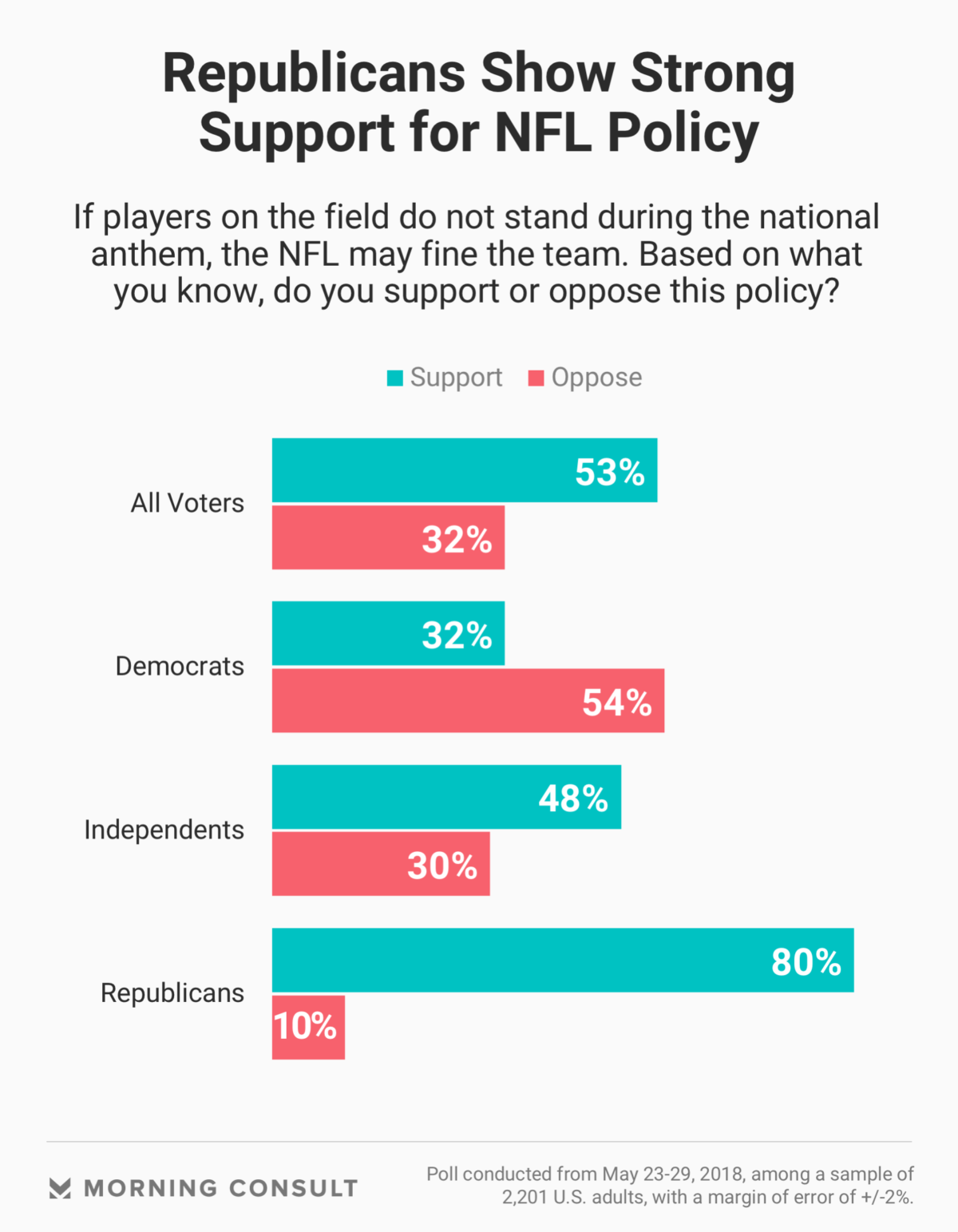 “Both sides are fairly dug in about whether or not they think the NFL is doing the right thing or the wrong thing,” Carter said in a phone interview on Wednesday.

If anything, the NFL’s decision, which gives players the option to stay in the locker room during the national anthem, may have been a mistake from a business perspective, Carter said.

“Having a clear and concise policy that applies across the board gives the people you do business with comfort, and there’s no ambiguity about your business. So taking that middle-of- the-road approach has not delivered clarity to any of its business partners,” Carter said.

The NFL did not respond to a request for comment, but NFL Commissioner Roger Goodell said in a statement upon the announcement of the policy that “it was unfortunate that on-field protests created a false perception among many that thousands of NFL players were unpatriotic. This is not and was never the case.”

The National Football League Players Association said in a statement on May 23, following the new policy announcement, that the league did not consult the union during the creation of the policy. The union added that players have displayed patriotism “through their social activism, their community service, in support of our military and law enforcement and yes, through their protests to raise awareness about the issues they care about.”

Rick Gentile, director of the Seton Hall University Sports Poll, said the data falls in line with his assumption that the policy wouldn’t have much of an impact on how people view the NFL. 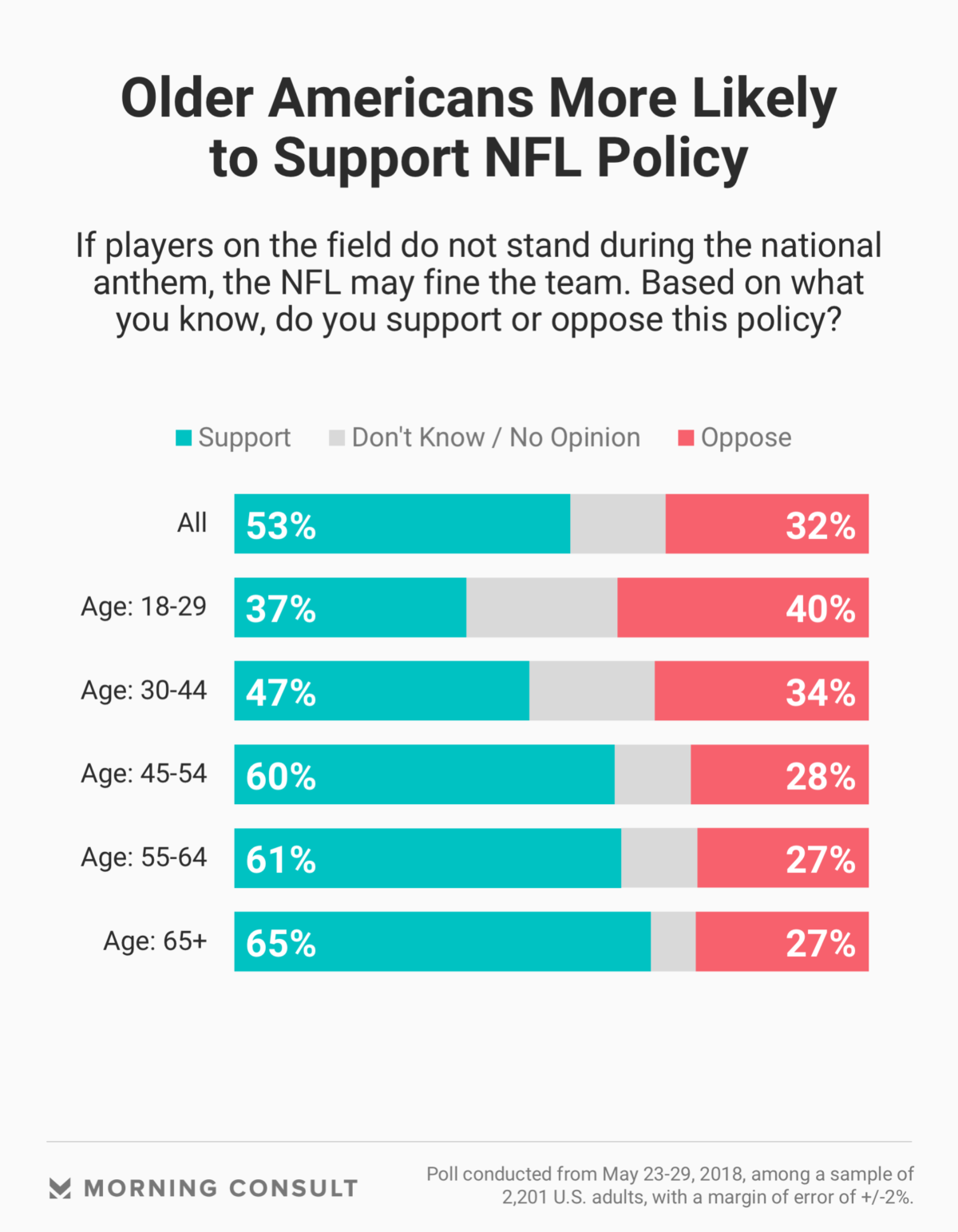 “People will be talking about it; it will become a thing,” Gentile said in a phone interview Wednesday, but he said that the controversy wouldn’t have a long-lasting impact on ratings.

In the 2017-18 season, Nielsen reported that during the first three weeks of the season, the league’s viewership had seen an 11 percent drop compared to the same time period a year earlier. Gentile said that based on his group’s research, the drop was mostly due to the protests.

However, the new policy could actually increase viewership at the beginning of the 2018-19 NFL season, Gentile said.

“I would suspect that the first week of NFL games rating will probably be higher than last year,” Gentile said, thanks to a “a curiosity factor.”