The Supreme Court overturned the 1992 Professional and Amateur Sports Protection Act on May 14, creating a path for states to legalize sports betting if they choose. On Tuesday, Delaware became the first state to do so, and New Jersey is set to vote on sports betting today, with Pennsylvania expected to follow suit soon.

As gambling entities, professional sports leagues and state and federal governments wrestle to find their role in this new market, whose annual revenue could be worth as much as nearly $16 billion, a new Morning Consult poll shows the Supreme Court decision is likely to change the demographics of sports betting.

Twenty-one percent of respondents said they’re likely to bet on sporting events if the practice becomes legalized in their state, and that demographic is younger (38 percent ages 18-34) and poorer (56 percent making less than $50,000 per year) than current sports bettors.

The poll also shows that basketball and football are likely to draw the most attention from prospective bettors, although all sports are expected to benefit in some way, experts said.

“It’s a given that each of the leagues is going to see an increase in interest and, of course, revenue as a result of legalized sports betting,” said Helen A. “Nellie” Drew, a professor of sports law at University at Buffalo School of Law, in an interview on May 23.

“The question is how is that pie going to be split?” 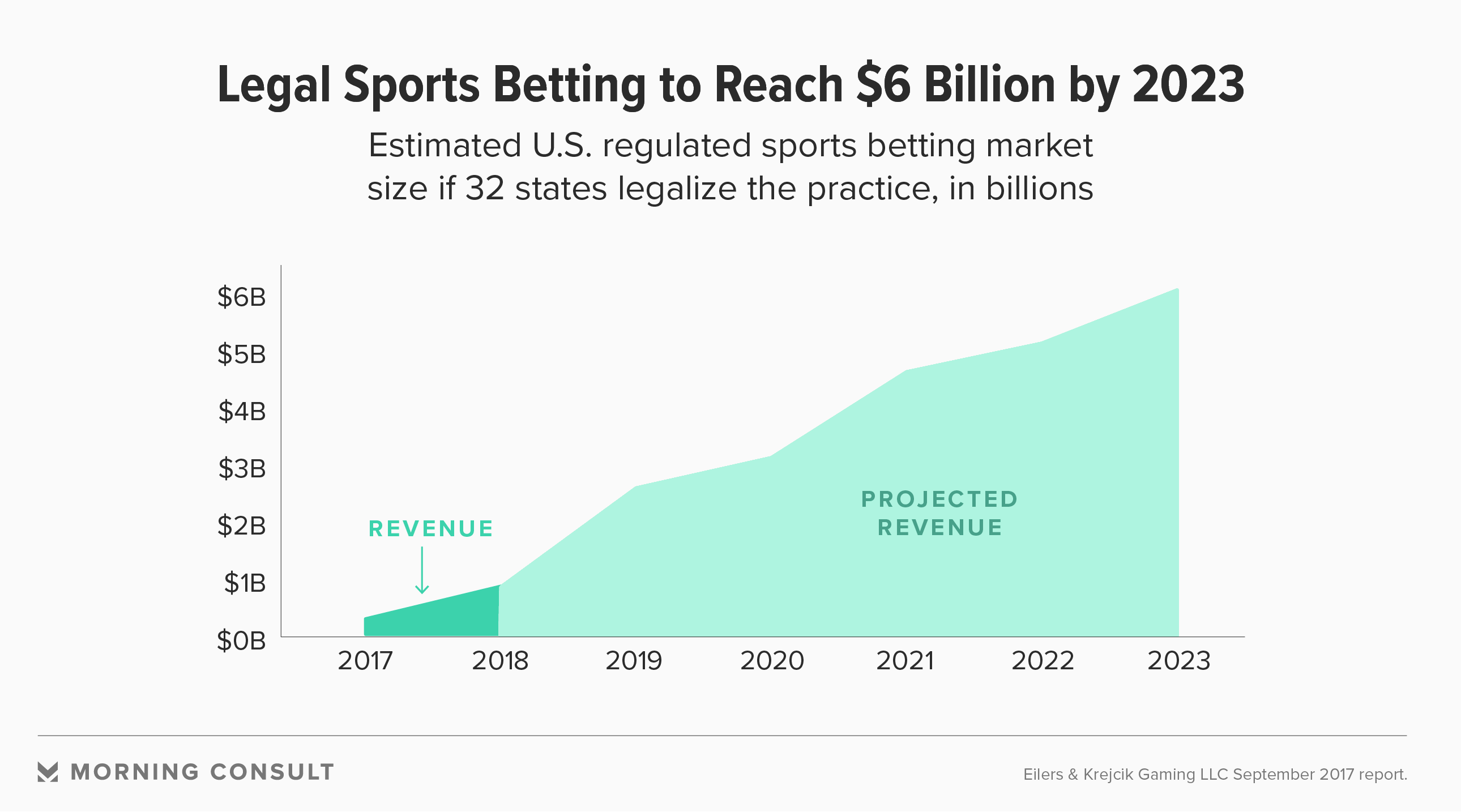 Sports betting projections paint a prospering market. If 32 states allow sports betting over the next five years, both in person and online, annual gaming revenues in the United States could reach $6 billion by 2023, according to a September 2017 report from Eilers & Krejcik Gaming LLC, a boutique research firm focused on gaming and technology.

But if all 50 states legalize such betting, annual revenue could hit $15.8 billion in five years, on nearly $245 billion in total bets placed.

Indeed, black market gambling made up 97 percent of the estimated $4.76 billion in bets made on Super Bowl LII, according to the American Gaming Association. 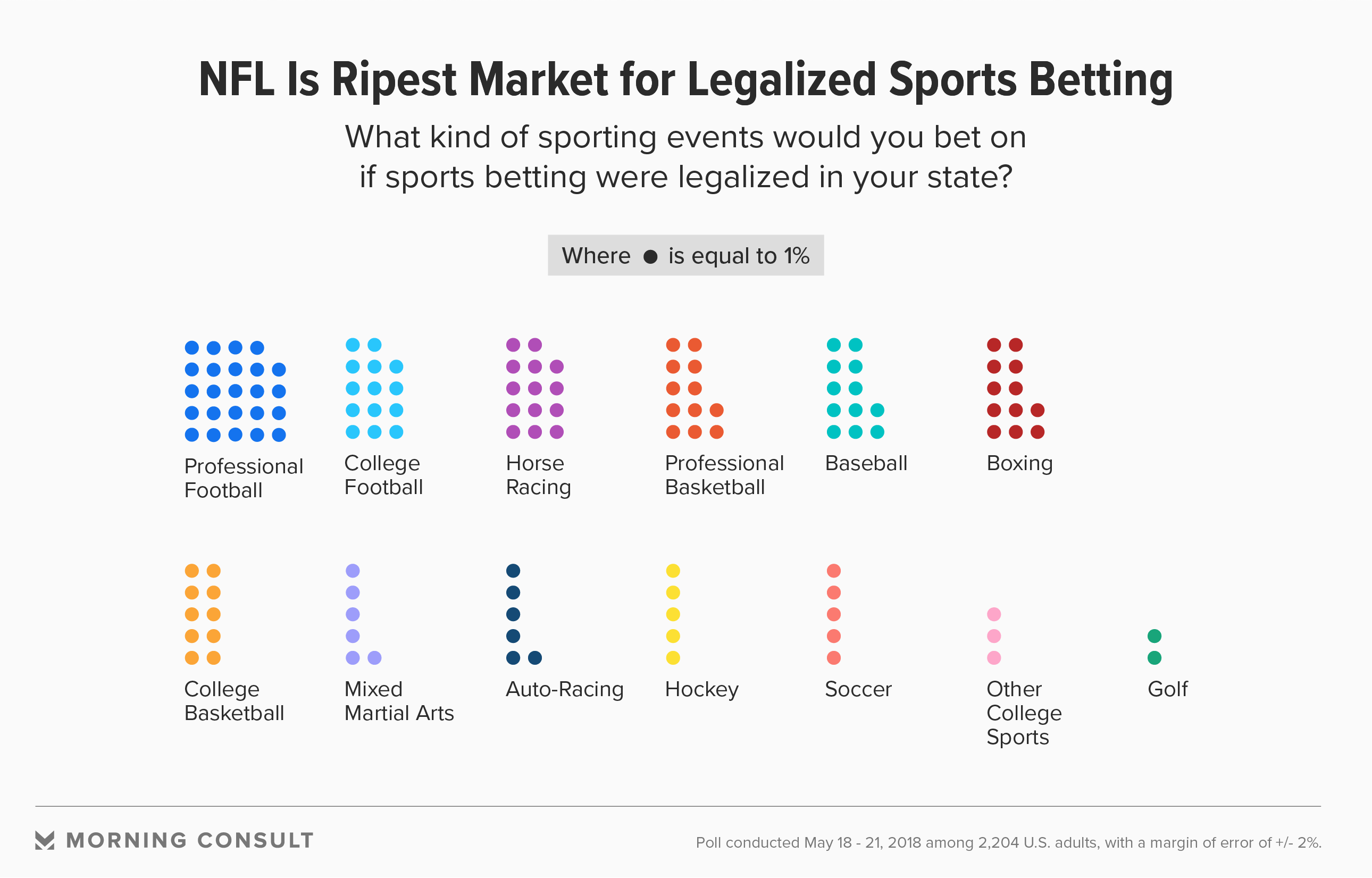 The Morning Consult poll conducted May 18-21 shows that the National Football League would benefit the most from legalized sports betting, with nearly one-quarter of the 2,204 U.S. adults surveyed saying they’d put their money on the league’s games if the practice were legalized in their state. The survey has a margin of error of 2 percentage points.

In Nevada, where sports gambling is legal, 66.5 percent of bets in 2017 were placed on basketball and football games, according to a January study by the Center for Gaming Research at the University of Nevada, Las Vegas, with about $1.8 million bet on football and about $1.5 million on basketball in 2017.

But Chris Grove, managing director at Eilers & Krejcik Gaming and co-author of the aforementioned report, said every professional sports league could see a “material upside” from  regulated sports betting.

Leagues such as the NFL and the National Basketball Association will have the largest monetary benefit, he said, with the majority of betting volume going to those leagues — but Major League Baseball and the Professional Golfers’ Association have the most to gain in terms of expanding viewership and engaging fan bases.

Sara Slane, senior vice president of public affairs for the American Gaming Association, noted in a phone interview on May 24 that “when consumers feel like they have skin in the game, they are compelled to watch more minutes of the game.”

Indeed, 92 percent of current sports gamblers said they’re more likely to watch a game when they have a bet on it, per the association’s 2017 “State of the States” report. 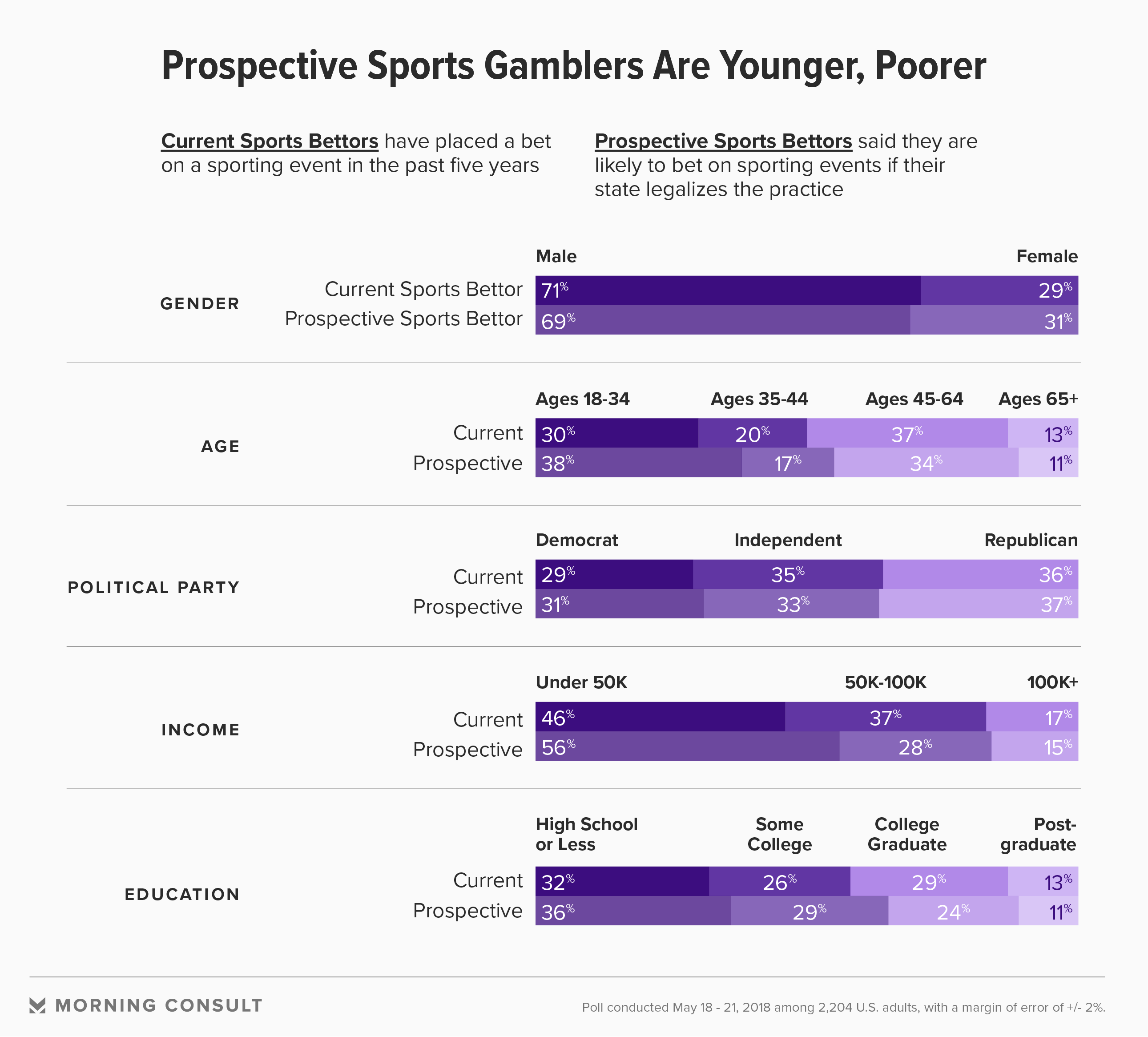 Despite being illegal in 46 states when the Morning Consult poll was conducted, 19 percent said they have placed a bet on a sporting event in the past five years.

Twenty-one percent are likely to participate in sports gambling if it becomes legal in their state, a figure that Drew said is “very low.” The University at Buffalo School of Law professor expects that number to explode once legal sports betting comes to apps and features such as in-game betting are included.

To be sure, sports betting also has a cobweb of legislation to climb through and a number of data ownership issues to address before the practice can go mainstream, experts said, not to mention the possibility of federal regulation.

“Broadly speaking, you’re going to see the economic questions recede to the background and the legislative questions take the foreground,” said Grove of Eilers & Krejcik Gaming. But, “obviously those two are intertwined.”

There’s still a lot of uncertainty about important aspects of this ruling, including whether sports leagues will receive “integrity” fees, whether leagues will create their own betting apps, and a number of issues concerning financial transactions using a player’s name, image and likeness.

However these issues are addressed, experts said American sporting will look the same.

“This is going to change the face of sports,” said AGA’s Slane.

Correction: A previous version of this story misstated the name of the organization that released a study on commercial casino gambling.