Most Americans Now Believe Russia Will Likely Meddle in Midterms 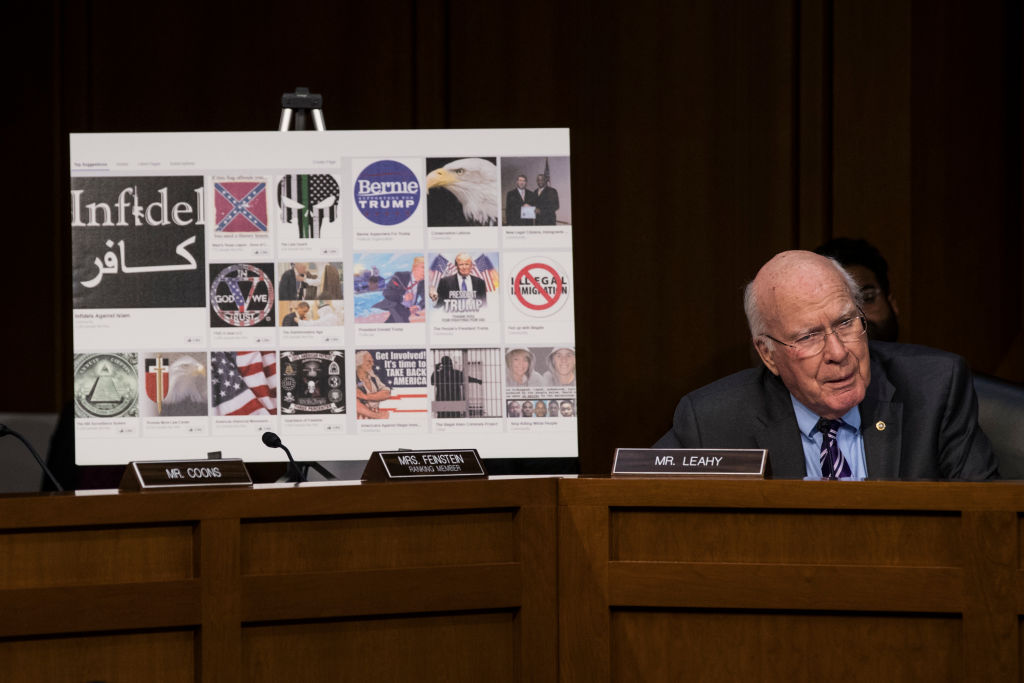 With examples of Russian-created Facebook pages behind him, Sen. Patrick Leahy (D-Vt.) questions witnesses during a Senate hearing in October on Russian disinformation online. (Drew Angerer/Getty Images)
By Edward Graham

A majority of U.S. voters believe Russia will try to interfere in the 2018 midterm elections, according to a new Morning Consult/Politico poll, up 10 percentage points from a January survey.

The June 14-18 survey found that 53 percent of 1,994 registered voters believe it’s likely Russia will try to influence the 2018 midterm elections for the House of Representatives and some senators, while 26 percent believe it’s unlikely. Another fifth of voters didn’t know or had no opinion. 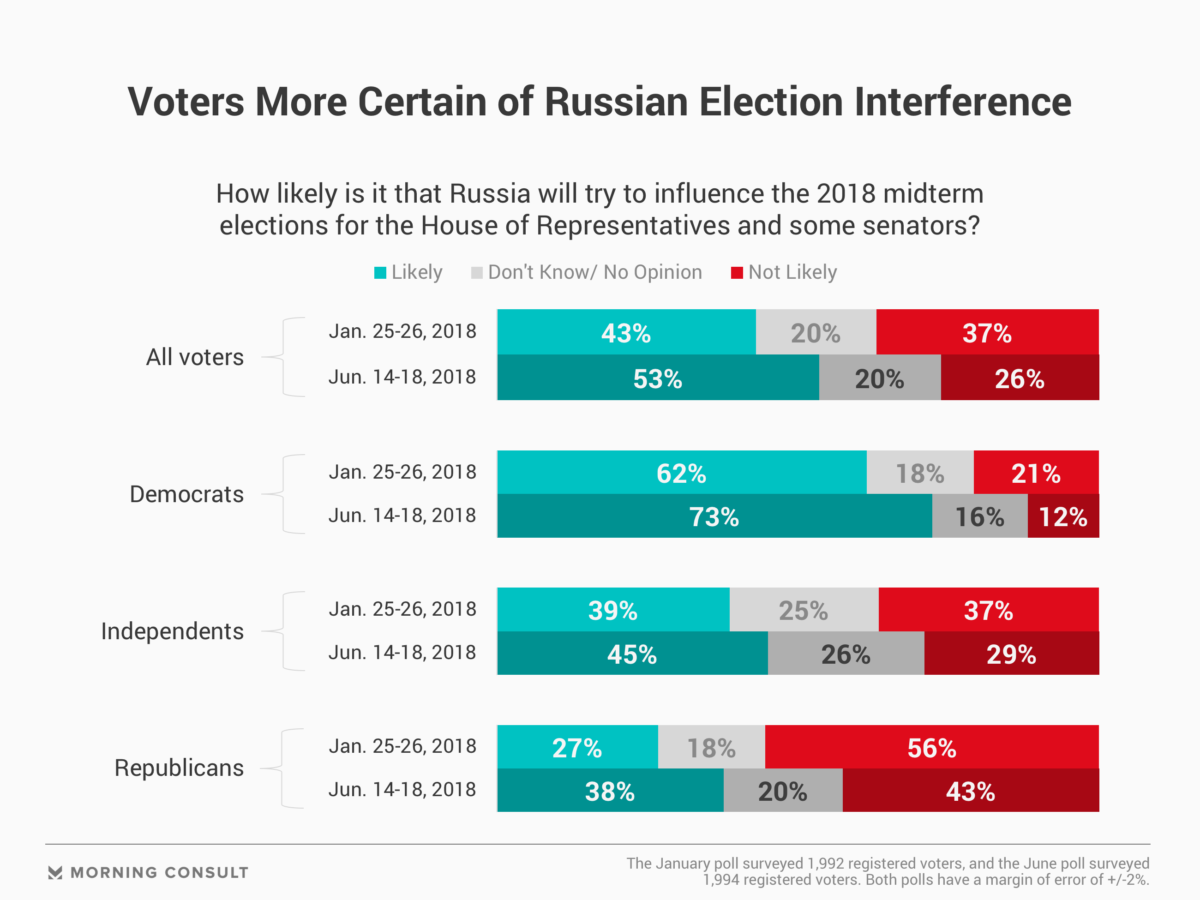 The numbers fell largely along party lines: Seventy-three percent of Democrats believe it’s likely that Russia will try to influence the November midterms, while 45 percent of independents and 38 percent of Republicans said the same.

U.S. intelligence officials concluded in a January 2017 report that Russia interfered in the 2016 election in part in order “to undermine public faith in the U.S. democratic process.”

David Becker, founder and executive director of the Center for Election Innovation & Research, a nonprofit advocacy group, said part of Russia’s influence campaign during the 2016 election involved sowing divisions between different groups, so it made sense these divisions would even spread to views of further election meddling.

“I’m not surprised at all by polling that demonstrates that Democrats and Republicans have different views on things like the possibility of election interference, because, for those who are attacking us, their goal is to widen those divisions,” Becker said in a Wednesday phone interview.

I have no doubt that if it was an attack seen by the public as something that negatively impacted Republicans, the numbers would be very different.

Lawrence Norden, deputy director of the Democracy Program at the Brennan Center for Justice

Previous Morning Consult/Politico polling, conducted in January, found that 43 percent of voters believed it was likely Russia would try to interfere in the 2018 midterm elections, while 37 percent said it wasn’t likely. Both polls have a margin of error of plus or minus 2 points.

Democrats and Republicans both saw an 11 point jump from January to June in their belief that Russia was likely to interfere in the midterms. But the 35-point partisan gap between the responses remained unchanged.

Related: Almost Half of U.S. Voters Not Sure Russia’s Behind Election-Related Hacks

Lawrence Norden, deputy director of the Democracy Program at the Brennan Center for Justice, a public policy think-tank, said it’s likely that growing partisanship is shading voters’ viewpoints on the potential for future Russian election meddling.

“In the recent past, this has been associated with an attack that negatively impacted Democrats,” Norden said in a Tuesday phone interview, speaking of Russian interference. “And so it becomes seen that way.

“I have no doubt that if it was an attack seen by the public as something that negatively impacted Republicans, the numbers would be very different.”

Related: After Intel Briefing, Trump Says Hacking Had ‘No Effect’ on Election Outcome

Norden pointed to the bipartisan consensus surrounding Russia’s efforts to interfere in the 2016 election — including a May 8 report issued by the Senate Intelligence Committee — as an example of growing overall acceptance of potential for Russian-sponsored election meddling.

The recent survey also found that pluralities of respondents believe state and local election officials, as well as political campaigns and committees, are not prepared to deal with potential cyber threats associated with the midterms.

Forty-nine percent of those surveyed said they believe states and local officials are unprepared to combat cyberattacks and hacking efforts on their election systems, versus 38 percent who said they were ready.

Numbers for political campaigns and committees were nearly identical, with 48 percent saying they weren’t ready to combat cyber threats, while 37 percent said they were.

Congressional lawmakers on both sides of the aisle have taken steps to better defend state and local election systems from cyber threats, including pushing for legislation that would require enhanced security standards. Congress allocated $380 million in its March spending bill for states and territories to modernize and protect their election systems.

“I think each state should begin to think about, once again, paper ballots,” Sen. Edward Markey (D-Mass.), who is co-sponsoring legislation that would require paper ballots and risk-limiting election audits for all federal elections, said in a June 14 interview.