Who Should Regulate Marijuana? Most Say States Over the Federal Government

A marijuana user wears a marijuana themed outfit during a 420 Day celebration on 'Hippie Hill' in Golden Gate Park on April 20, 2018, in San Francisco, California. (Photo by Justin Sullivan/Getty Images)
By Joanna Piacenza

More of the public is getting behind the idea of decriminalizing marijuana, according to new polling. Yet the legalization of cannabis is a patchwork quilt of local legislation that greenlights the drug for medical use in some states and provides full legal protection for recreational use in others.

A new national survey shows a majority believe individual states, as opposed to the federal government, should be regulating marijuana. 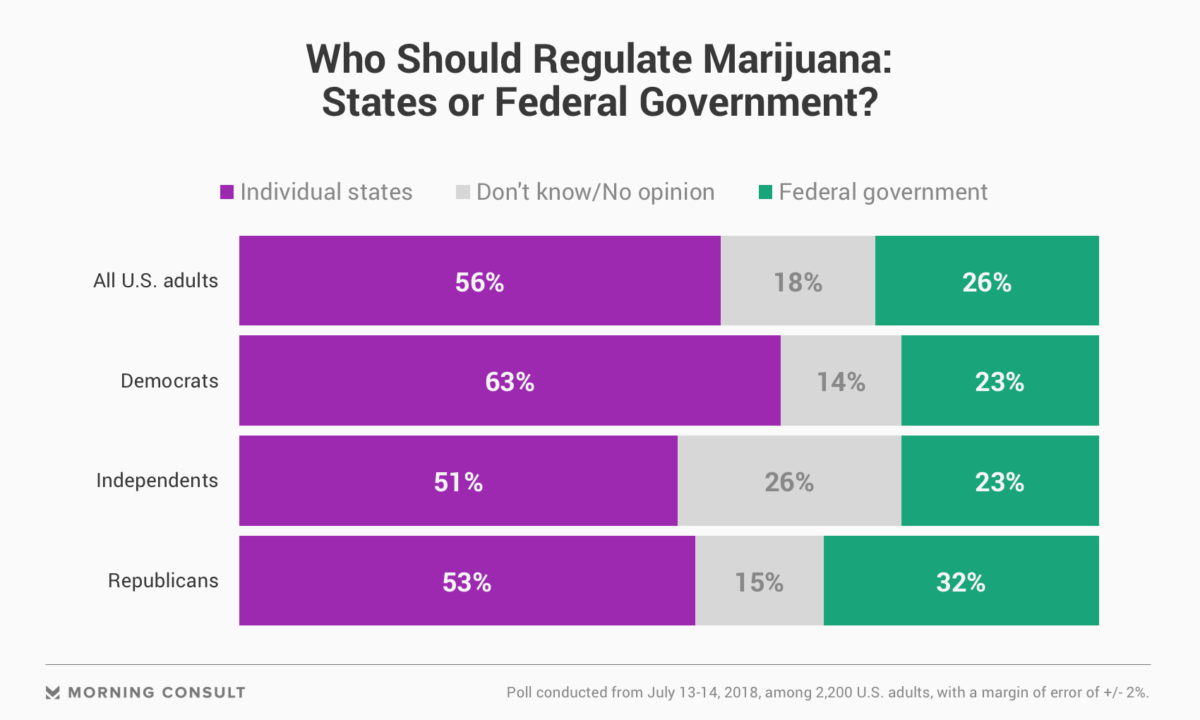 Fifty-six percent of adults say states should be the ones overseeing marijuana within their borders, while 26 percent say the responsibility of regulation should go to the federal government, according to the poll of 2,200 Americans conducted July 13-14.

Experts say states will continue to take up regulation on their own, in an accelerated fashion.

“By 2022, we expect every state to be medical-only or fully legal” via this approach, said Matthew Karnes, founder of the financial research and analysis group GreenWave Advisors LLC, which specializes in the cannabis industry. Other experts also echoed Karnes’ assessment of the legalization timespan.

Nine states and the District of Columbia allow the recreational use of marijuana, while 21 additional states permit its medicinal use, according to the National Conference of State Legislatures. The New York Department of Health this month released a report saying it supports legalizing marijuana for recreational use in the state.

Political leaders have submitted bills that attempt to hash out the issue from both a state and federal level.

Sen. Elizabeth Warren (D-Mass.) introduced a bipartisan bill (S. 3032) in June that would give states the right to determine how to handle marijuana within state lines. President Donald Trump told reporters at the White House last month that he would “probably” support the legislation, according to pool reports.

There are dozens of other marijuana-themed bills in Congress, but most of them likely won’t see any movement.

“They have zero traction and almost no chance of passing,” said Emily Burns, founder of Legally Burns LLC, which provides legal services and consulting for the marijuana industry.

This will be the case as long as Republicans have control of the committees that decide whether these bills get any floor time or hearings, Burns said in an interview this week, but things will likely shift if Democrats take control of Congress this fall or in 2020.

Despite Trump’s comments, Attorney General Jeff Sessions signaled in January that the federal government is likely to more forcefully prosecute federal anti-marijuana laws, when he ordered the annulment of Obama-era policies that largely protected the substance from federal prosecution.

Senate Majority Leader Mitch McConnell (R-Ky.) also said in May that he has no plans to support marijuana’s legalization.

The nation will likely see a piecemeal, state-by-state approach to the legalization of marijuana moving forward, Burns and others said.

“So it gives everyone an opportunity to see what works best and what should be adopted in other places,” he said.

Majorities of nearly every subgroup polled favored state control except for African-Americans, although they were more likely to support local control (45 percent) over federal control (29 percent).

People might prefer state oversight because it might make them feel as though they will have more control over local enforcement, Angell said. 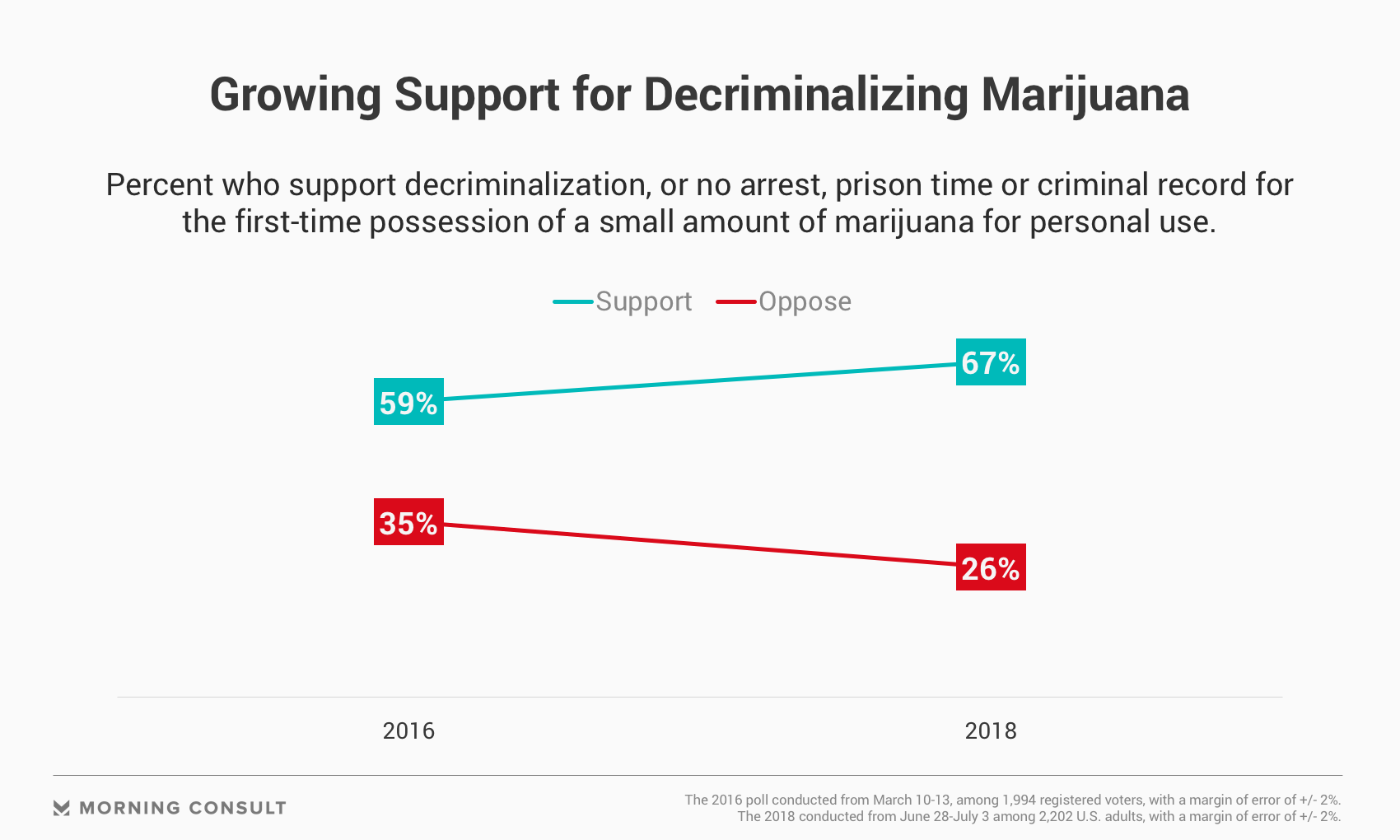 Experts say U.S. political leaders may also take their cue from their northern neighbor, after Prime Minister Justin Trudeau announced in June that marijuana will be legal come October.

That’s something Americans would like to see happen, according to additional new polling.

More than two-thirds (67 percent) of registered voters and majorities of every subgroup support decriminalizing marijuana, or eliminating the arrest, prison time and criminal record for the first-time possession of pot for personal use, according to the June 28-July 3 survey.

That’s up from 59 percent in 2016. During the intervening two years, 14 states have legalized the medical use of marijuana (Arkansas, Florida, North Dakota, Ohio, Oklahoma, Pennsylvania and West Virginia), decriminalized it (Illinois and New Hampshire) or legalized it for recreational use (California, Maine, Massachusetts, Nevada and Vermont).

Support for legalizing marijuana, a polling question with slightly different wording and connotation, has roughly doubled in the past 15 years, according to Gallup data.

“This issue is now at the forefront of mainstream American politics,” Angell said.