What Democrats and Republicans Are Prioritizing Ahead of the Midterms

President Donald Trump is revered by Republicans and detested by Democrats — and what congressional candidates think of the president is more important than nearly every policy issue polled, including security and health care, for both Republicans and Democrats in the third edition of Morning Consult’s State of the Parties survey.

Twenty-two percent of Republican voters said a candidate’s support for the president was the top issue on their minds when casting ballots for House and Senate candidates, while 21 percent of Democrats said opposing Trump was most important. 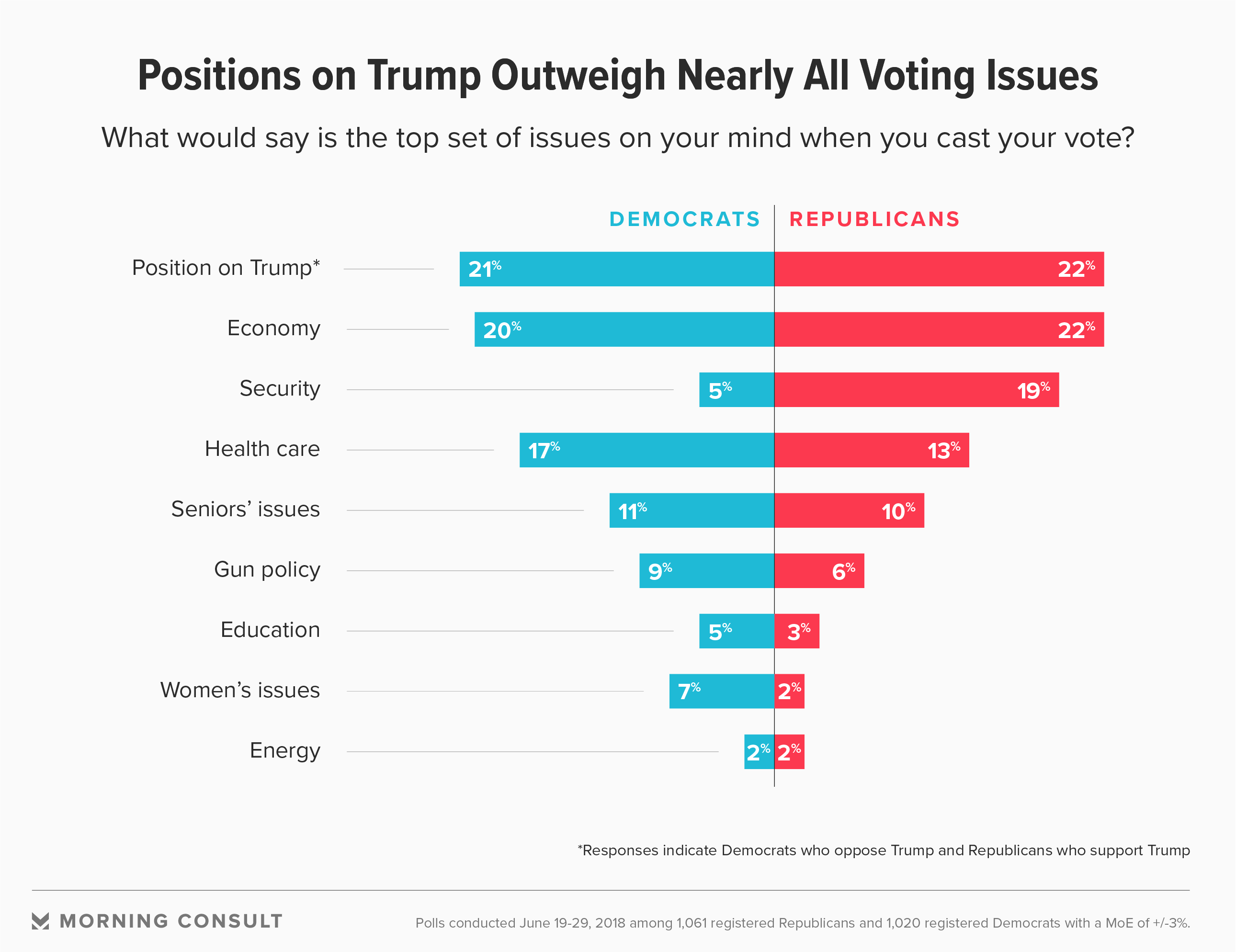 Trump has tightened his grip on the GOP base: In the survey of Republicans, 55 percent strongly approved of his performance and a third “somewhat” approved; the May 2017 survey showed 46 percent strongly approving and a third “somewhat” approving. Conservative candidates across the country have made their loyalty and support for the president a central part of their candidacies.

The fervor against Trump from the left is even more prominent. Seventy-two percent of Democrats surveyed said they strongly disapproved of the president and 14 percent somewhat disapproved, compared with 69 percent and 12 percent, respectively, who said the same last year.

Reminiscent of the conservative tea party movement in 2009 and 2010, liberal activists have sought to “#resist” the GOP agenda through demonstrations, grassroots advocacy pressure on members of Congress and heightened turnout in elections up and down the ballot. (A March analysis of 95 special elections by FiveThirtyEight found that Democrats had outperformed the normal partisan lean of their districts by an average of 13.2 percentage points since Trump’s inauguration.)

While the president remains the central issue of the election cycle, both Democrats (20 percent) and Republicans (22 percent) placed a similar emphasis on economic issues. But what those “kitchen table” issues mean, exactly, has diverged between partisans. 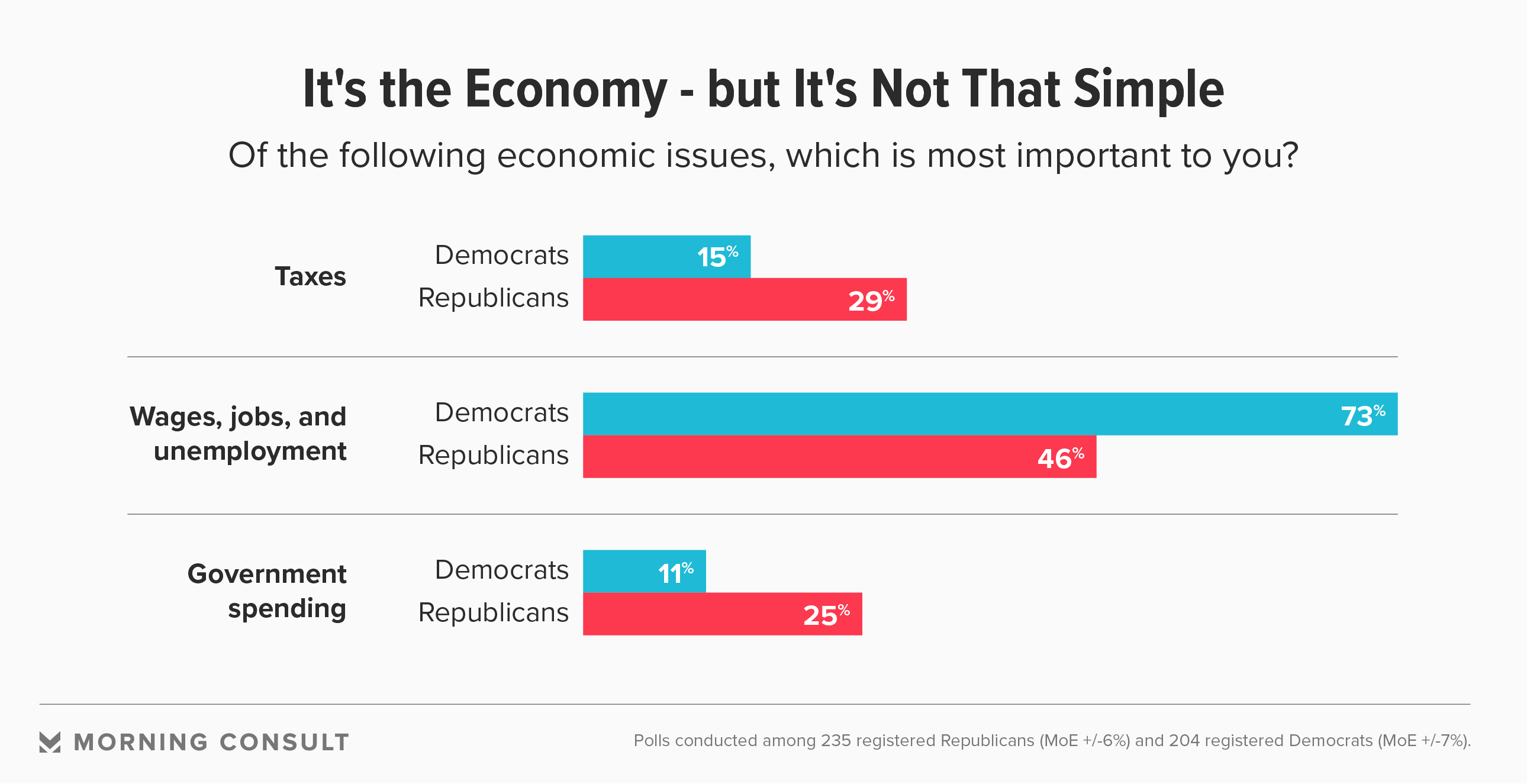 Compared with Democrats, Republican interest was fairly balanced between the subjects of wages, jobs and unemployment (46 percent), taxes (29 percent) and government spending (25 percent). Democrats were much more likely to prioritize the first metric — 73 percent said wages, jobs and unemployment were the most important economic issues — compared with 15 percent who said taxes and 11 percent who said government spending.

Priorities diverged further from there, with security (19 percent) checking in as the second-most important policy issue for Republicans. For most GOP voters who had security at the top of their minds, the border was paramount, with 56 percent saying securing the border was the most important part of security issues, compared with 39 percent who cited terrorism and 5 percent who chose foreign policy.

In contrast, health care, at 17 percent, was the second-most important policy area for Democrats, a subject the party hopes will finally bring political dividends. Health care was an albatross for many election cycles following the passage of the Affordable Care Act, former President Barack Obama’s signature 2010 health law — the party lost its grip on Congress, a baker’s dozen of governorships and more than 900 seats in state legislatures.

While Obama’s success with voters did not trickle down to many others in his party during his two terms in office, he’s expected to hit the campaign trail this fall as Democrats look to retake the House and Senate. Holding a rally with No. 44 could help buoy Democratic candidates hoping to unseat Republican incumbents, as Obama remains the clear standard-bearer of the party. 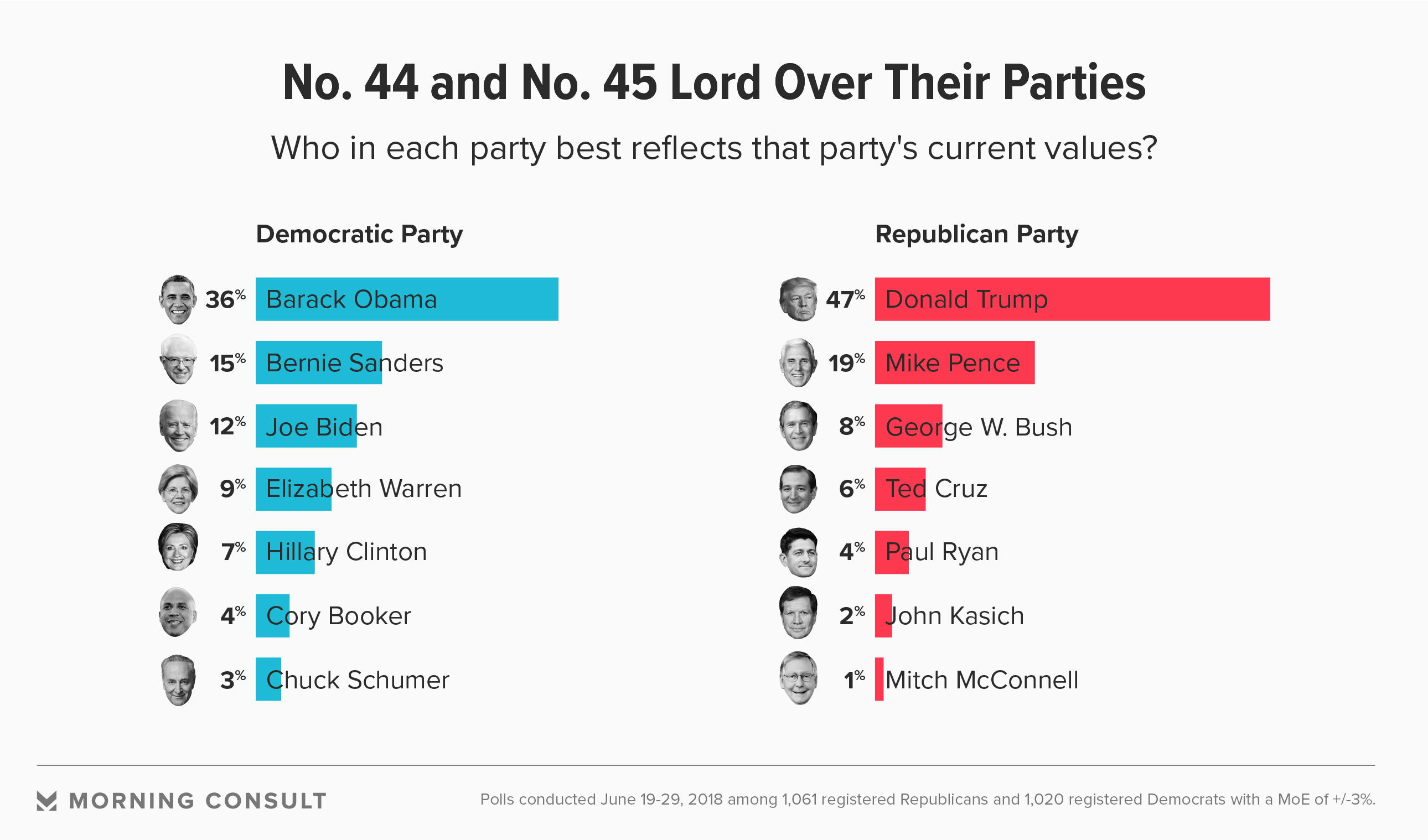 More than one-third (36 percent) of Democrats surveyed said Obama was the best reflection of their party’s values, versus 35 percent who said so last year. That compares with 15 percent who this year picked democratic socialist and independent Sen. Bernie Sanders of Vermont, 12 percent who chose former Vice President Joe Biden and 9 percent who plumped for Massachusetts Sen. Elizabeth Warren. Half as many Democrats (7 percent) said Hillary Clinton, the 2016 Democratic presidential nominee, best reflects the party’s current values compared to a year ago.

Republican responses on the question underscore the influence Trump currently wields within the party. Nearly half (47 percent) of GOP voters said he best reflects the GOP’s values, up 9 points from the 2017 survey. Republicans were also slightly more likely to say the party should be molded in the president’s image: Sixty percent said he was the person who should best reflect the party’s values, up from 55 percent a year ago.

As Trump continues to consolidate his influence in the party, rank-and-file Republicans have grown more optimistic about both the future of the country and the party. Seventy-seven percent of GOP voters say the United States is heading in the right direction, up 8 points from last year, and 72 percent said the same of the party, up 6 points from 2017. 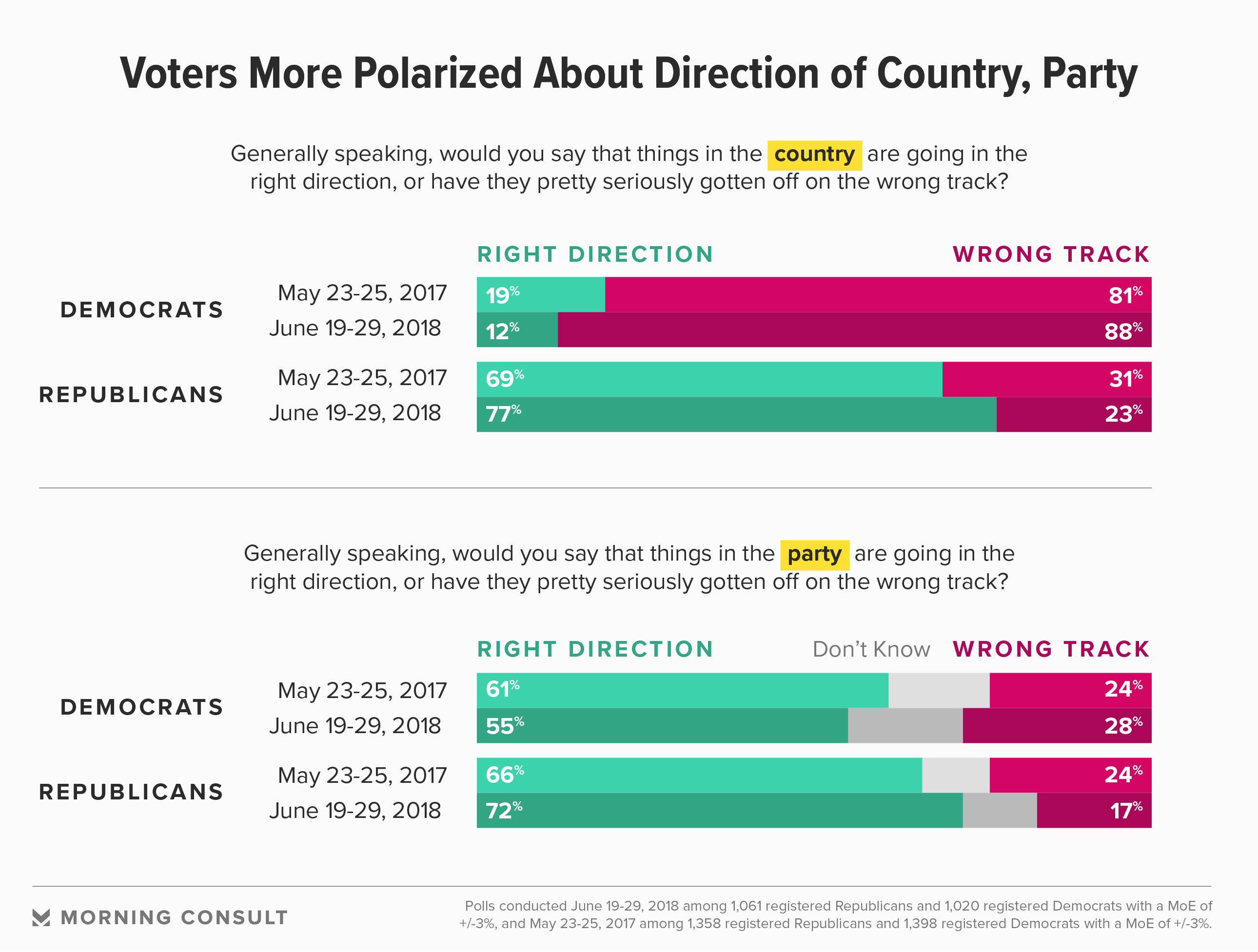 But Democrats are increasingly more likely to see the glass as half empty when it comes to the United States: Eighty-eight percent of respondents in the Democratic survey said things had gotten off on the wrong track in the country, up 7 points from 2017. And while a majority of Democrats believe their party is heading in the right direction, more than a quarter (28 percent) said the party was off the rails, 4 points higher than last year.

The surveys were conducted June 19-29 among 1,061 registered Republicans and 1,020 registered Democrats, and have a 3 percentage point margin of error.