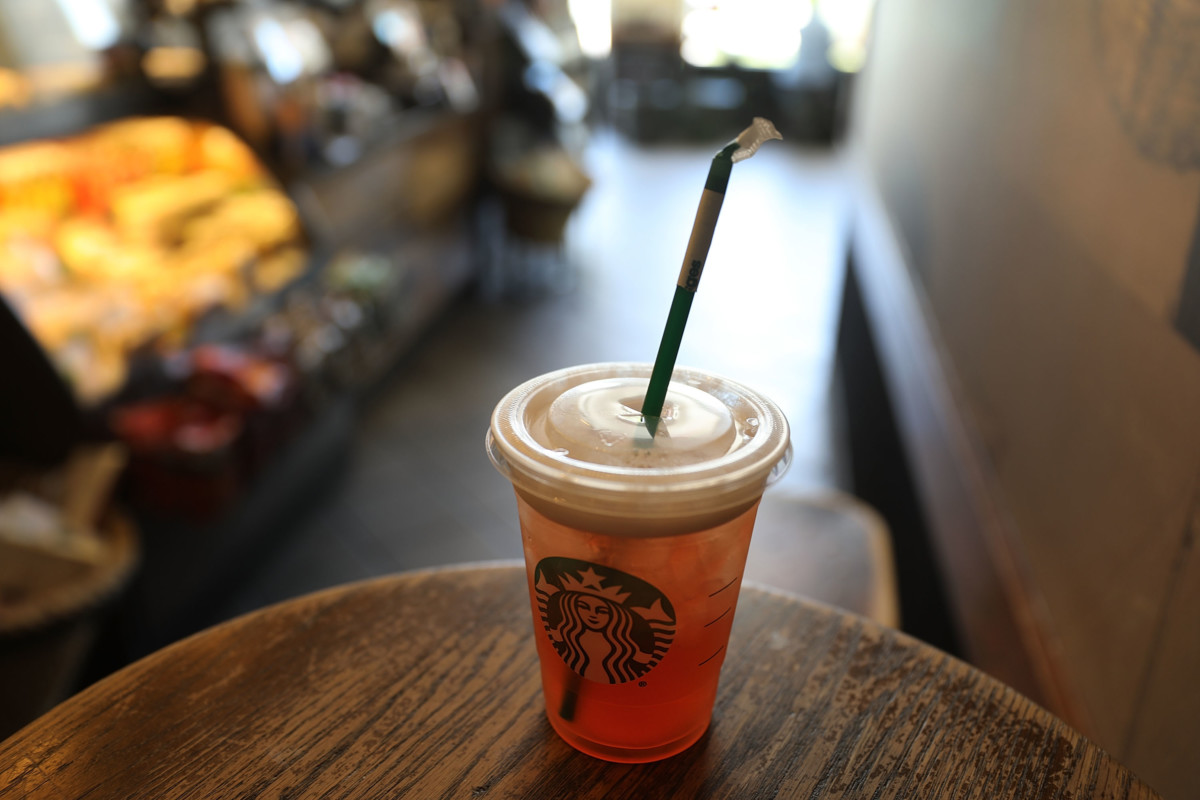 A Starbucks drink in a Miami outlet. Starbucks said in July that it plans on phasing out all plastic straws from its 28,000 stores worldwide by 2020. (Photo Illustration by Joe Raedle/Getty Images)
By Sam Sabin

As Starbucks Corp. and Walt Disney Co. join a growing number of companies in phasing out plastic straws, it’s not certain that their actions will actually make a dent in the amount of plastic waste generated. But that may not matter as much for their overall brand image, as a new Morning Consult poll shows the move has the support of U.S. consumers, who also believe that banning straws will be effective in reducing waste.

In the survey, which was conducted July 19-23 among 2,201 U.S. adults, 67 percent said they back a company’s decision to ban plastic straws. Consumers are also supportive of recycling efforts: 66 percent said that if a company instituted a new recycling policy to reduce plastic waste, it would give them a more favorable impression of that company.

At the same time, 55 percent of adults believe companies are not doing enough to reduce waste. The poll has a margin of error of 2 percentage points. 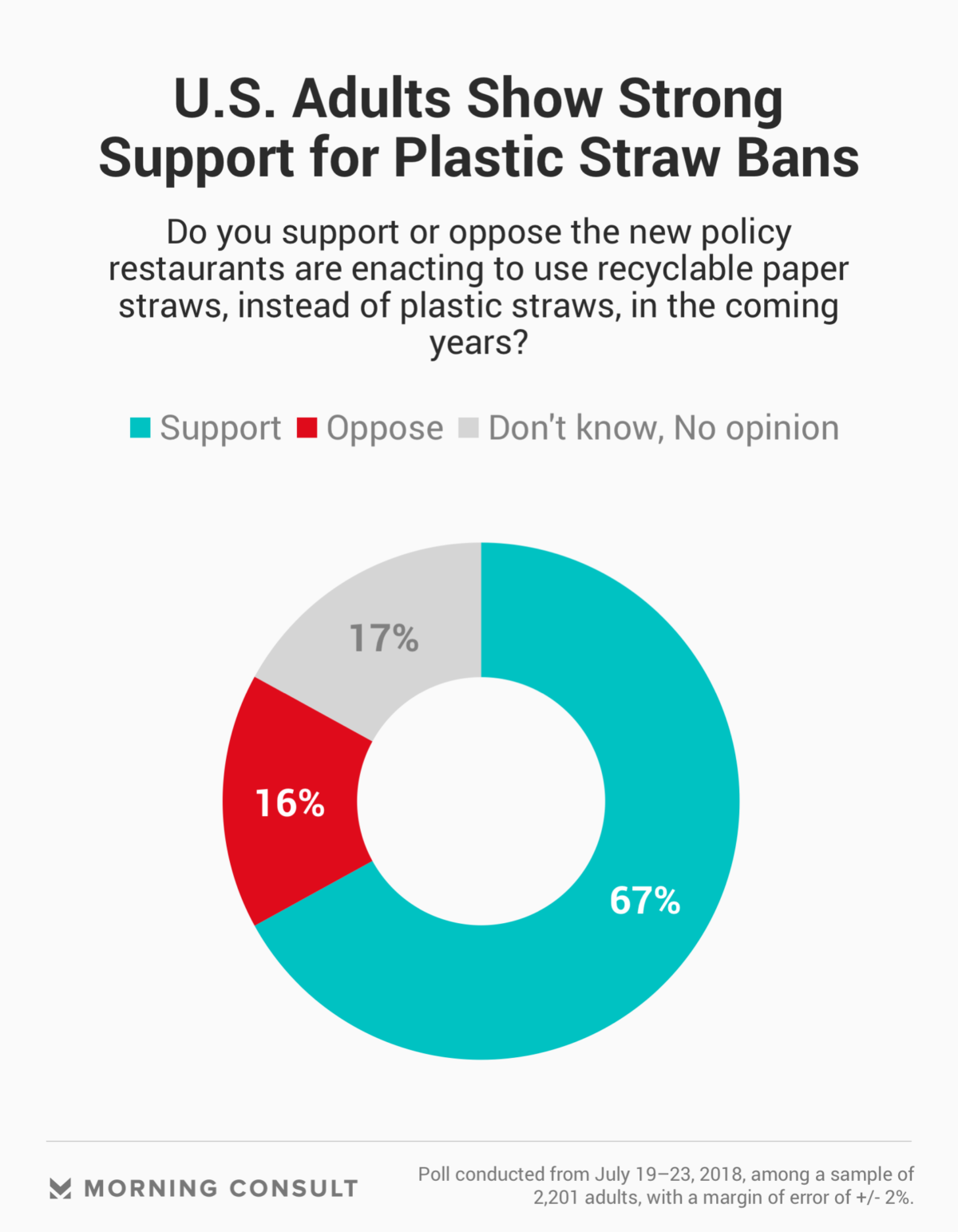 “The ban on plastic straws alone probably won’t change too much in the grand scheme of things regarding plastic pollution, but from a business perspective, they are symbolic as a step towards more eco-friendly consumption practices,” said Lindsey Bier, assistant professor of clinical business communication at the University of Southern California Marshall School of Business, in a phone interview Friday. “Brands that are banning plastic straws are offering customers the opportunity to feel a personal connection, and they make the consumer feel as if they are making a difference.”

Bier sees the move of businesses ridding themselves of plastic straws as a play at appealing to a younger consumer base.

“We know that millennials care about environmentalism,” she said. “We know that they support eco-friendly corporations, so if you want to remain financially sustainable with your consumer base, you have to alter your business practices in order to satisfy them.”

In the Morning Consult poll, however, support for a plastic straw ban was steady among all age demographics, except those 65 and older, of whom 76 percent supported the ban.

Some of the companies that have announced plans to stop using plastic straws intend to replace them with paper ones, which are more costly than plastic, but they haven’t disclosed how much more they will end up paying for the switch. Starbucks said it plans to eliminate more than 1 billion straws a year as it phases them out of 28,000 global locations. Walt Disney estimated its move to ban plastic straws by 2019 would eliminate more than 175 million straws and 13 million plastic stirrers that its customers use on a daily basis.

City governments are also joining in, with Seattle, the home of Starbucks, being the first to enact a ban on plastic straws, along with plastic utensils, in July.

In the Morning Consult poll, 58 percent said they believe banning plastic straws would be effective in reducing waste, on par with those who said the same about banning plastic utensils and halting single-use products. But more people said switching to paper bags (68 percent) and sourcing foods locally (63 percent) would help cut down on waste. 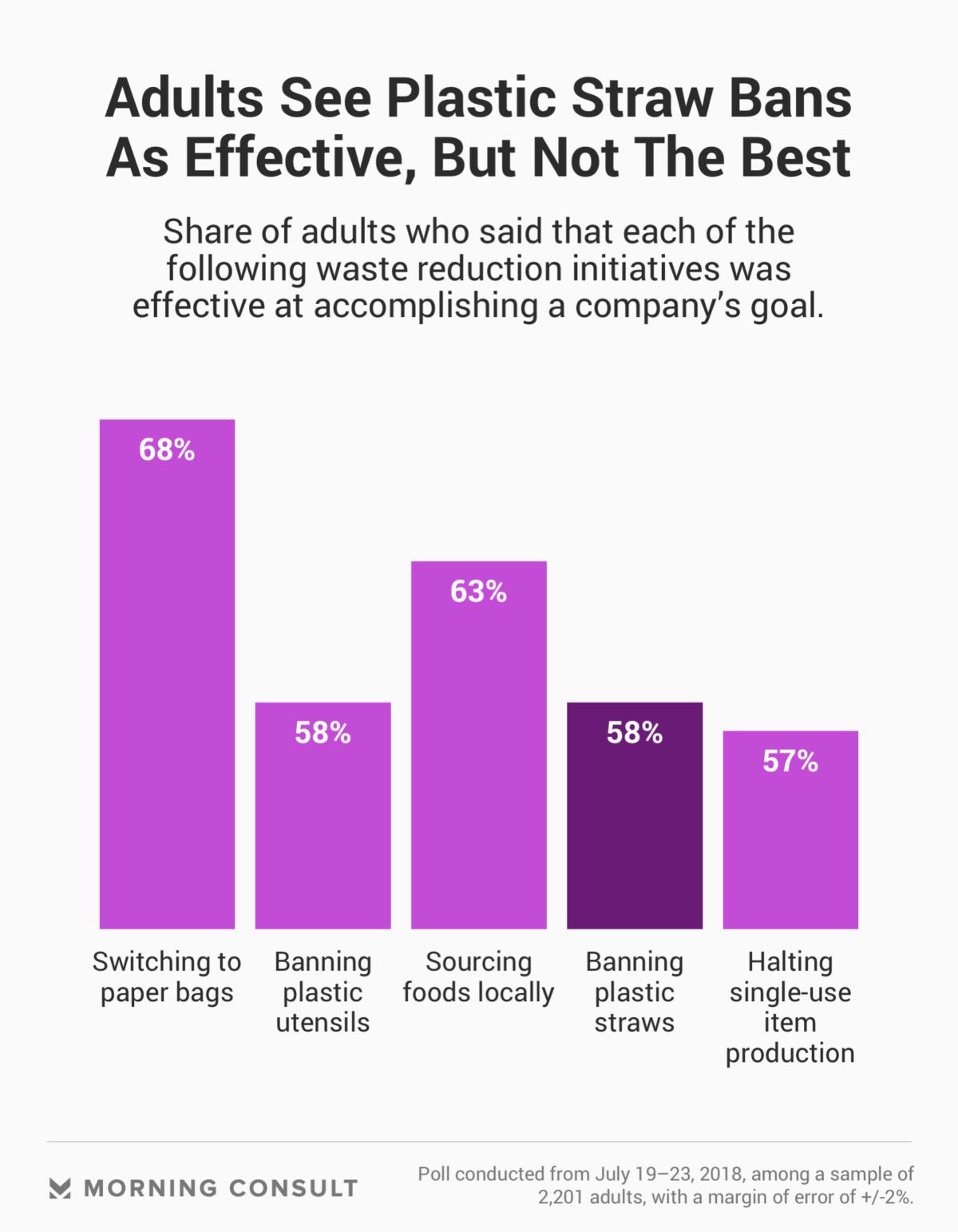 Despite the money corporations and cities have been spending on the switch from plastic straws and other plastic-based materials, Julie Andersen, global executive director of the Plastic Oceans Foundation, said these moves will only go so far to help the issue.

“Are they going to make a big dent in the amount of ocean plastic? Quantitatively, probably not,” Andersen said in a phone interview Friday. “But it does send a message. It’s starting to change our social belief and understanding of plastic.”

She likens the ban on single-use plastic items to the banning of smoking in public spaces, steps that she said forced the public to think about how much it wants to continue those activities.

But, she said, businesses need to make consumers pay to use plastic items, as some localities do with plastic bag use.

“That way, you’re going to see the bigger impact of real behavioral change on the consumer side,” Andersen said.