Poll: 83% of Democrats, 80% of GOP voters say insurers should have to cover all people regardless of health issues

Sen. Joe Manchin (D-W.Va.) speaks on a proposed protection plan for people with pre-existing health conditions during a news conference on Capitol Hill on July 19, 2018, in Washington, D.C. (Photo by Mark Wilson/Getty Images)
By Yusra Murad September 12, 2018 at 12:01 am ET

As Affordable Care Act protections for people with pre-existing conditions continue to play a major role in the discourse surrounding health care legislation ahead of the midterm elections, a new Morning Consult/Politico survey shows widespread, bipartisan support among voters for these ACA provisions.

In the survey of 1,988 registered voters conducted Sept. 6-9, 83 percent of Democrats and 80 percent of Republicans say that insurance companies should not have the legal right to deny coverage for people who have pre-existing conditions. Among all registered voters, 81 percent had the same opinion. 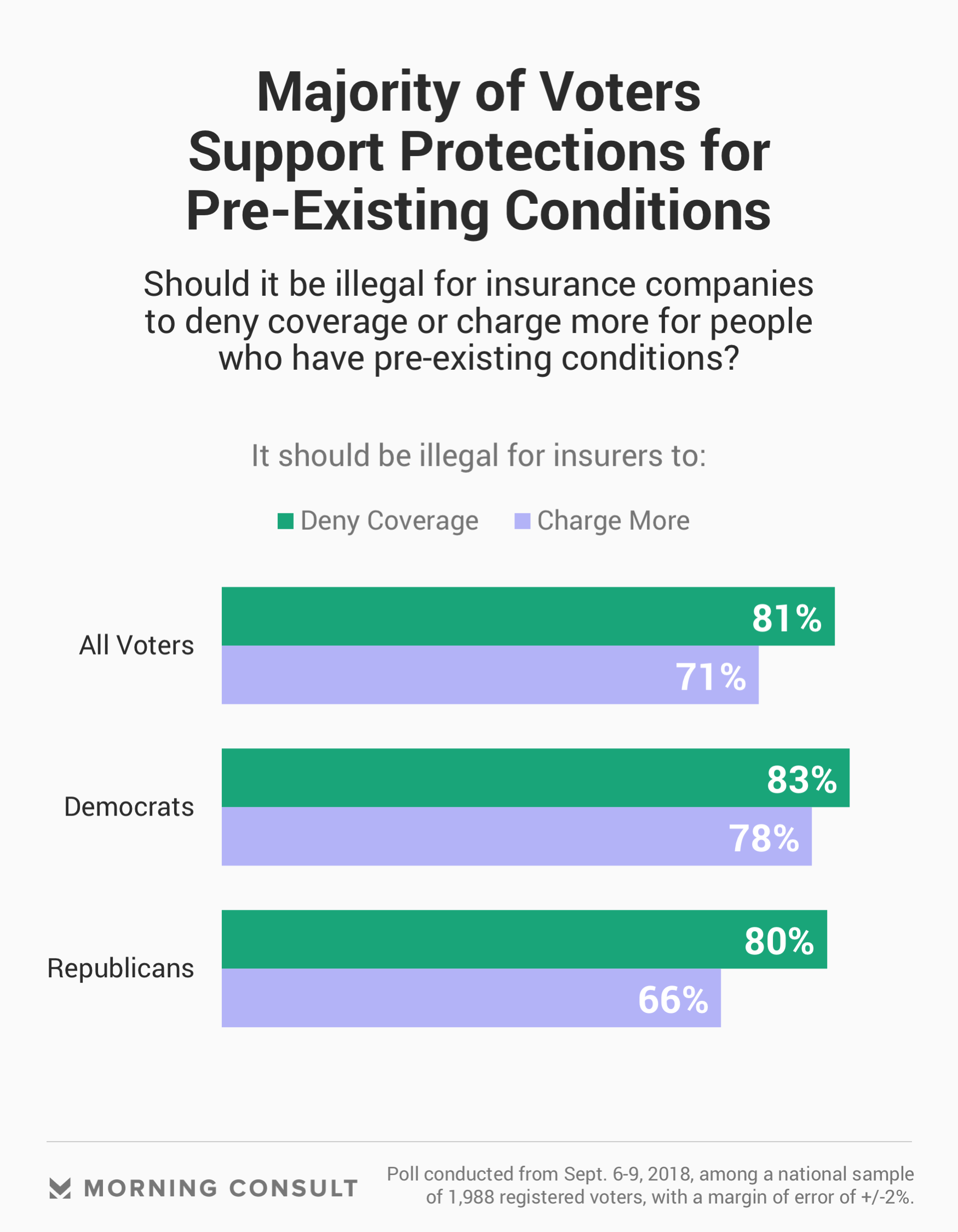 A slightly lower share of voters, 71 percent, said it should be illegal for insurers to charge more for people with pre-existing conditions. The survey’s margin of error is 2 percentage points.

According to Josh Holmes, who served as chief of staff to now-Senate Majority Leader Mitch McConnell (R-Ky.) from 2011-14 and is president of public affairs firm Cavalry LLC, the vast majority of Republicans believe coverage for pre-existing conditions is important.

“The question is, how do you execute that?” Holmes said. “Nobody has found the perfect solution.”

The Department of Health and Human Services estimated in January 2017 that pre-existing conditions affect up to 133 million non-elderly Americans. HHS also found that from 2010-14, when the ACA’s major health insurance reforms first took effect, the share of people with pre-existing conditions who went uninsured all year dropped 22 percent — that is, 3.6 million fewer people lacked coverage.

A Texas-led lawsuit backed by Republican attorneys general and governors from 20 states, with support from the Justice Department, is seeking to repeal the ACA on the basis that the fall of the individual mandate necessitates the removal of the two provisions that ensure people with pre-existing conditions have equal access to coverage and do not face higher rates — guaranteed issue and community rating. The judge overseeing the lawsuit has not yet ruled on the case.

A Morning Consult/Politico poll in August showed 83 percent of Republican voters support a partial or complete repeal of the ACA, but Holmes said GOP support for protections for people with pre-existing conditions was not mutually exclusive with the desire to strike down Obamacare.

“That’s why it was always ‘repeal and replace,’ not just repeal,” Holmes said.

Among Democrats, 49 percent reported being aware of the lawsuit, compared to 32 percent of Republicans. Many Democratic candidates have used the lawsuit and the Republican health care agenda to rally voters, according to Ferguson.

“Democrats are leaning into it because it reveals whose side the Republican Congress really is on,” Ferguson said. “You can’t be on the side of people with pre-existing conditions if you back Trump in a plan to take away protections.”

As the midterms approach, a 42 percent plurality of voters say they trust Democrats in Congress to protect people with pre-existing conditions, with 20 percent saying the same about congressional Republicans. Eleven percent said they trust both parties equally, and 15 percent say they don’t trust either party.