Protestors rally against Supreme Court nominee Judge Brett Kavanaugh as they make their way from the Supreme Court to the Hart Senate Office Building on Capitol Hill on Sept. 24, 2018, in Washington, DC. (Photo by Drew Angerer/Getty Images)
By Eli Yokley

Public support for Judge Brett Kavanaugh to fill the vacant Supreme Court seat has dropped to its lowest point since President Donald Trump nominated him in July, driven in large part by a sector of the president’s base: Republican women.

A new Morning Consult/Politico poll, conducted Sept. 20-23, found support for Kavanaugh’s confirmation is underwater among registered voters for the first time since his nomination, with 37 percent opposing the Senate confirming him and 34 percent supporting it.

The new finding marks a 5-percentage-point drop in net support since a poll conducted last week, after Christine Blasey Ford detailed her allegation that Kavanaugh sexually assaulted her while the two were in high school, a charge he has repeatedly denied.

Ford’s allegation about Kavanaugh was followed by another, detailed in The New Yorker Sunday night, in which Deborah Ramirez, one of Kavanaugh’s Yale University classmates, said he exposed himself and caused her to touch him without her consent. Kavanaugh denied her charge in a statement as a “smear, plain and simple.”

The poll was conducted before another accuser, Julie Swetnick, on Wednesday detailed parties where she accused Kavanaugh and others of trying to drug girls so they could be “gang raped.” Kavanaugh denied the allegation, saying in a statement provided by the White House: “This is ridiculous and from the Twilight Zone. I don’t know who this is and this never happened.” 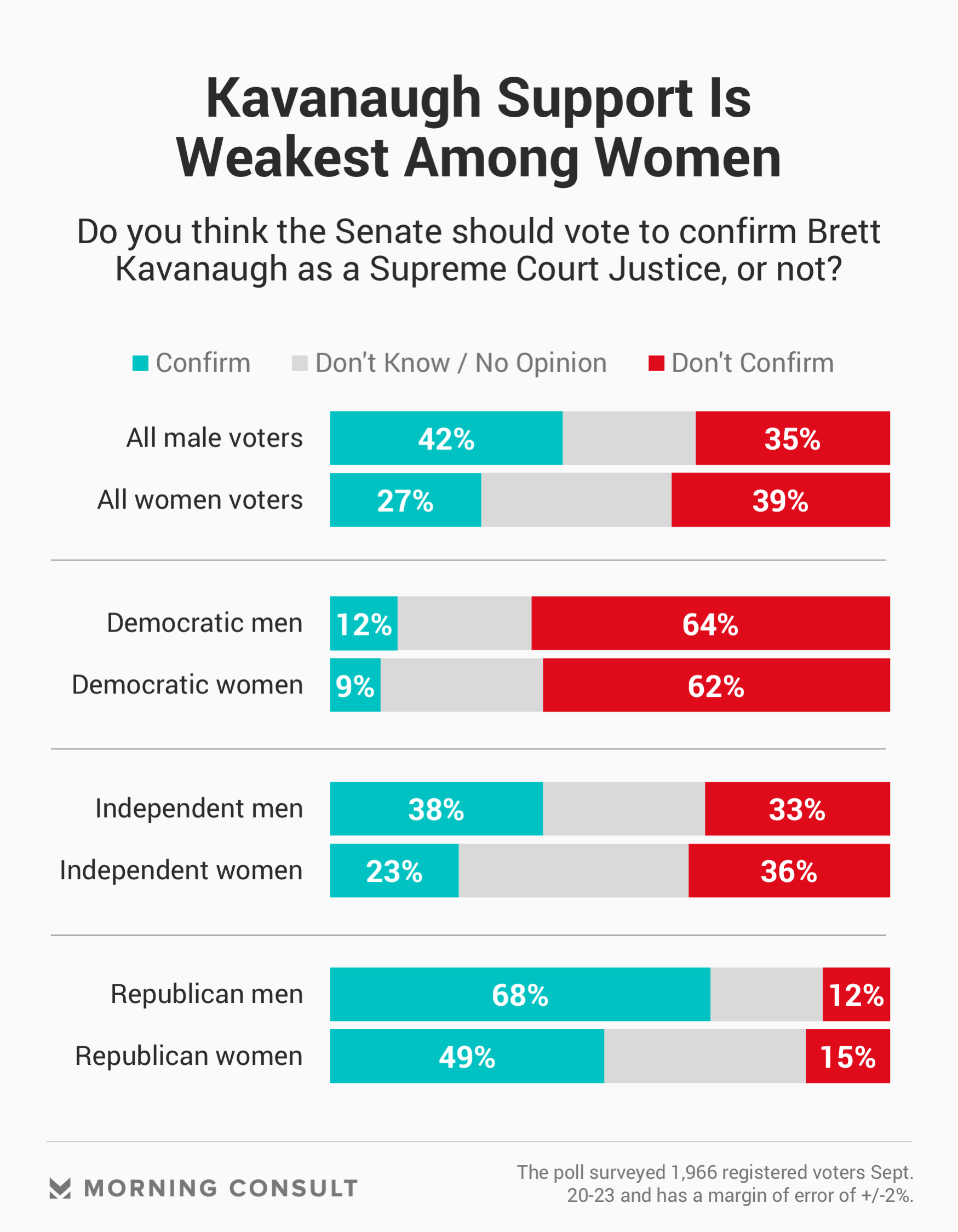 Kavanaugh’s net support among Republicans — the share who oppose his confirmation subtracted from those who support it — dropped 11 points, with 58 percent now in support of his confirmation and 14 percent opposed. The shift was driven by an 18-point fall in net support among Republican women, with 49 percent now in favor and 15 percent in opposition.

Trump on Tuesday sought to unite Republicans in favor of Kavanaugh ahead of the midterm elections in November, quoting conservative talk radio host Rush Limbaugh on Twitter as saying, “You can kiss the MIDTERMS goodbye if you don’t get highly qualified Kavanaugh approved.”

But views of Trump over the past week have been dragged down alongside those of his nominee. Seventy-two percent of GOP voters now approve of the president and 23 percent disapprove, making for a net support drop of 16 points since the poll last week. (The results for GOP voters have a 4-point margin of error.)

Among GOP women, the drop in net support was 19 points since last week, with 68 percent approving and 26 percent disapproving.

The latest poll, which surveyed 1,966 registered voters, has a margin of error of 2 points. 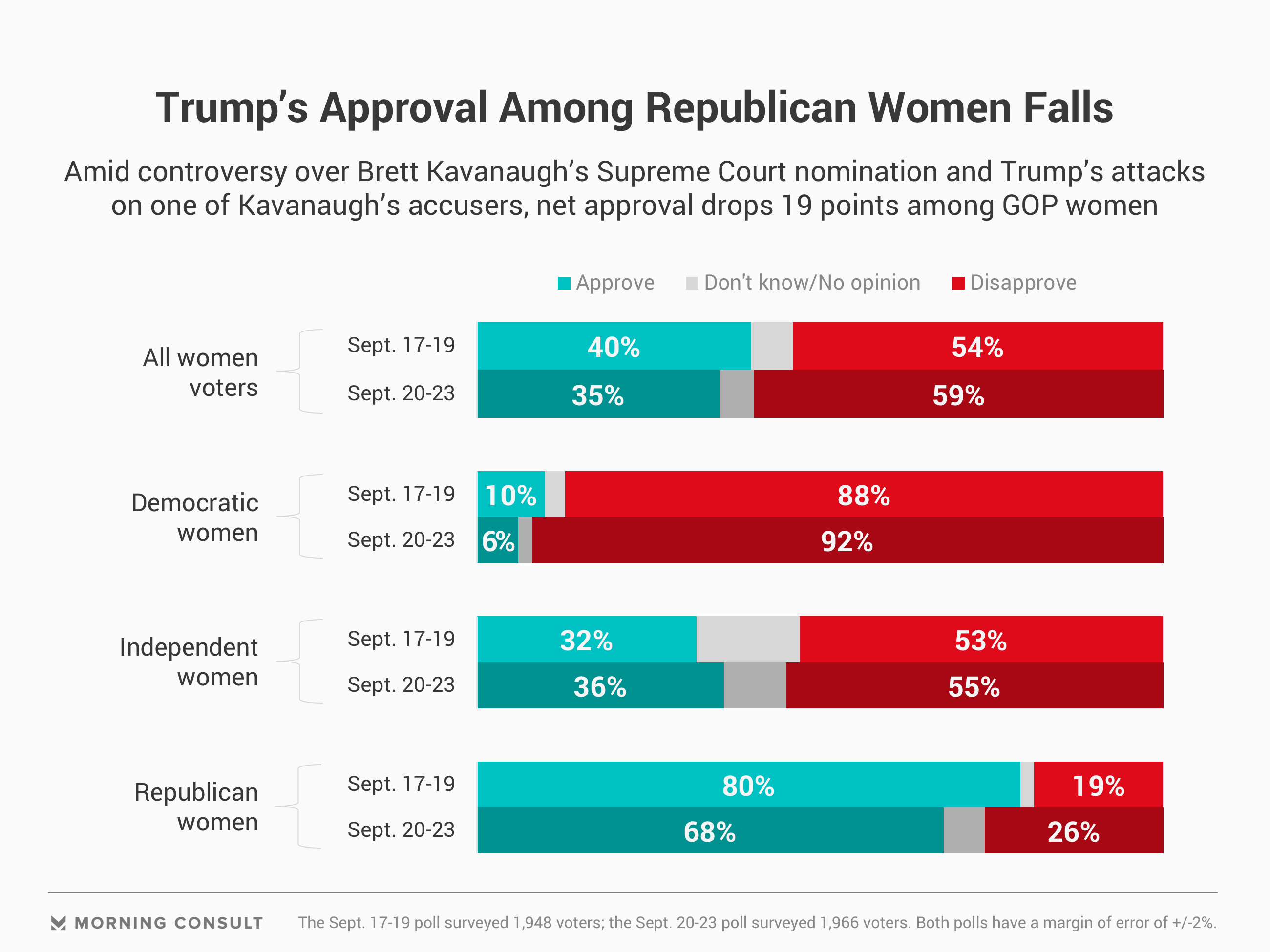 The poll was conducted after Kavanaugh denied Ford’s allegation, but before he participated in an interview on Fox News to defend himself, seated alongside his wife, Ashley Estes Kavanaugh.

Senate Majority Leader Mitch McConnell (R-Ky.) urged supporters of Kavanaugh to not be rattled by the allegations, telling evangelical voters at the Value Voters Summit last week that the Senate is “going to plow right through it and do our job.”

Questions remain about whether Kavanaugh has the votes he needs in the Senate, where members of the Judiciary Committee are set to take testimony from Ford during a hearing Thursday.

Voters expect lawmakers to listen to her charges: Forty-four percent said the allegation should be considered by the Senate in deciding whether to confirm Kavanaugh to the Supreme Court, versus 37 percent who said it should not.

Those in favor of a Senate hearing include a 46 percent plurality of women, versus 34 percent who were opposed. Men were split on the issue, 42 percent to 41 percent.

Kavanaugh is also set to speak. According to his prepared testimony, released Wednesday by the Judiciary Committee, he is set to tell lawmakers he wasn’t “perfect” in high school and drank beer with his friends, “usually on the weekend.” But, “I categorically and unequivocally deny the allegation against me by Dr. Ford.”

Correction: A previous version of this story mischaracterized the figures pertaining to support from GOP women.