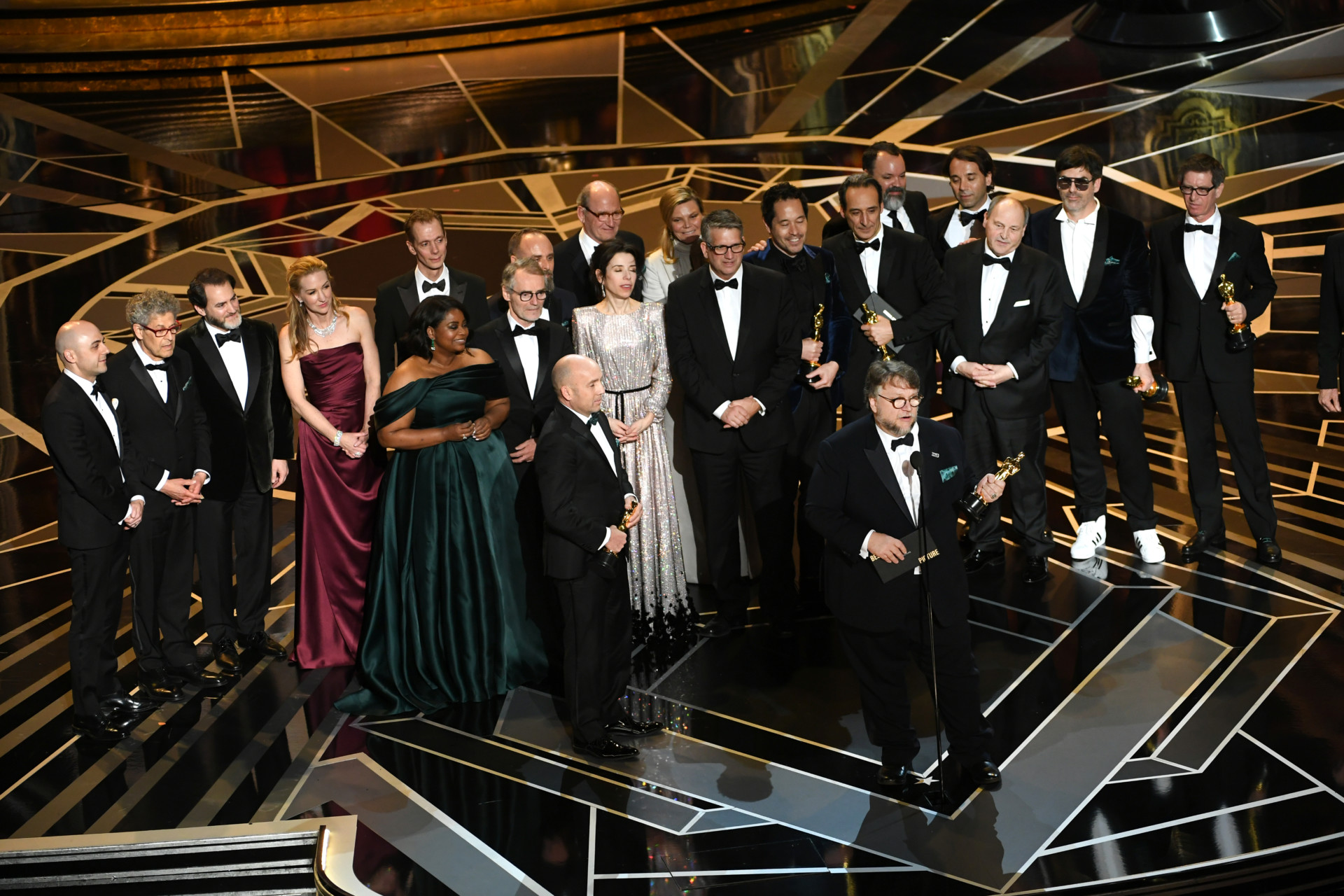 An Academy Award has long been considered the highest honor in the entertainment industry, but new polling shows that, when tested, most people can’t name the films, actors and actresses that have won an Oscar.

A Jan. 3-6 Morning Consult/The Hollywood Reporter survey of 2,201 U.S. adults finds that a majority (58 percent) of respondents didn’t know which film won last year’s Best Picture award, although the largest share of respondents (20 percent) who did wager a guess were able to correctly name “The Shape of Water” as the winner.

Twenty percent also believed that “La La Land” won Best Picture in 2017 — a larger share than those who were able to correctly name “Moonlight” as the winner (12 percent), confusion that echoed the mix-up during the live broadcast in 2017.

Russell Williams, a professor of film and media arts at American University and a voting member of the Academy of Motion Picture Arts and Sciences, the organization behind the Oscars, said that a reason for the lack of knowledge could be the distance between the Academy and everyday consumers.

“They’ll be announced on one day, and the next day they return to their daily lives,” Williams said. “And unless the film was something that actually spoke to you personally, emotionally, spiritually, more than likely, you’re going to move on and not remember Best Picture.”

Joe Olivieri, a professor of acting at the UCLA School of Theater, Film and Television, offered another explanation, connected to the Academy’s tendency to honor artistic, character-driven works over box office smashes.

“It’s films with more artistic integrity that get Oscar nods,” he said. 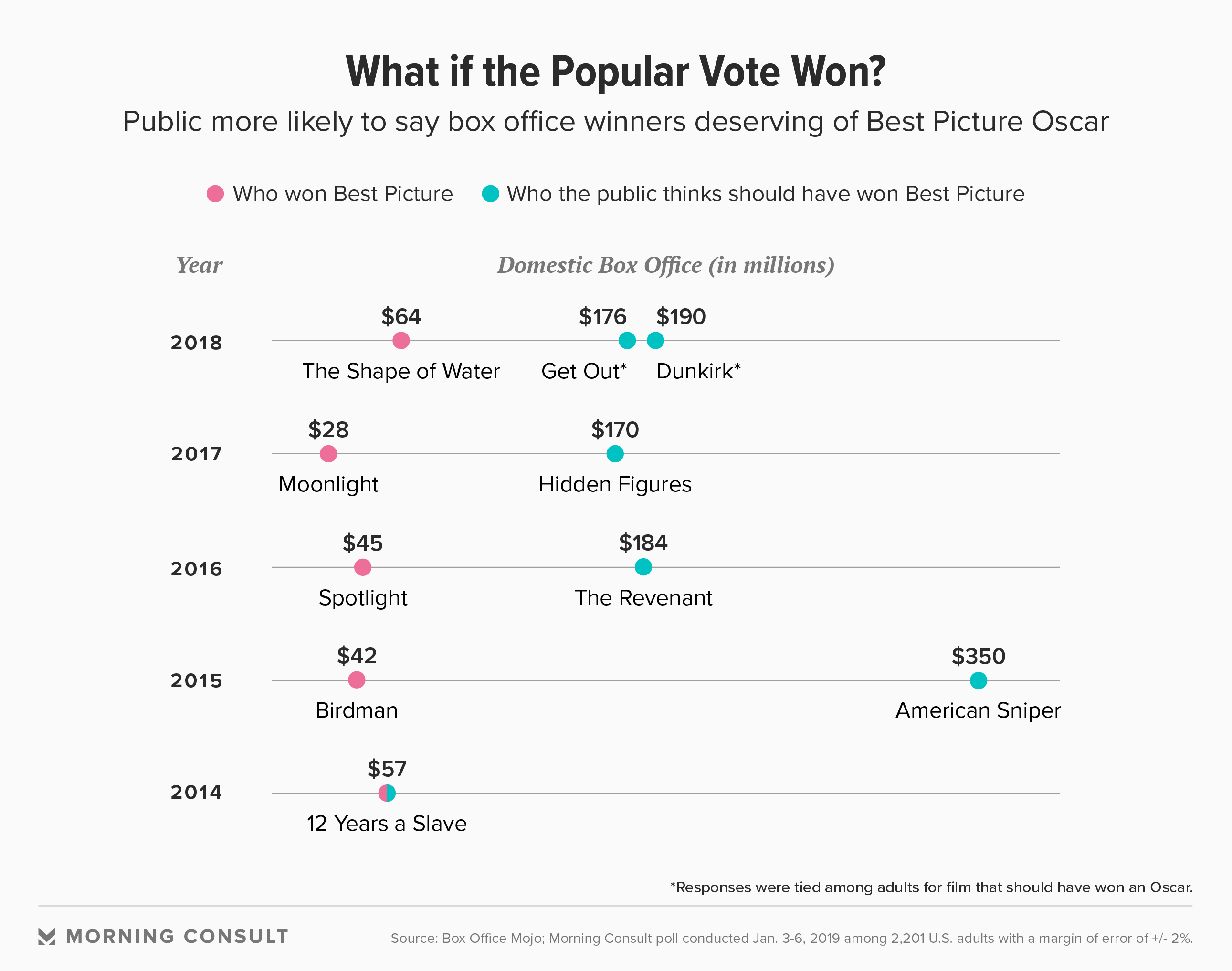 When asked which films should have won, respondents were more likely to select the highest or second-highest grossing films among their fellow nominees at the domestic box office that year.

For example, while 60 percent said they didn’t know who should have won in 2018, the largest share (8 percent) said Jordan Peele’s “Get Out” should have won, and another 8 percent chose Christopher Nolan’s “Dunkirk.”

Those films respectively grossed $176 million and $189.7 million domestically, compared to the roughly $63.9 million “The Shape of Water,” which won the category that year, brought in.

“The nominees in the past few decades have been a division, in some cases, between what the Motion Picture Academy members like in terms of best achievement in film and the films that made the most money,” Williams said.

And audiences also struggled to remember which actors and actresses have taken home trophies. 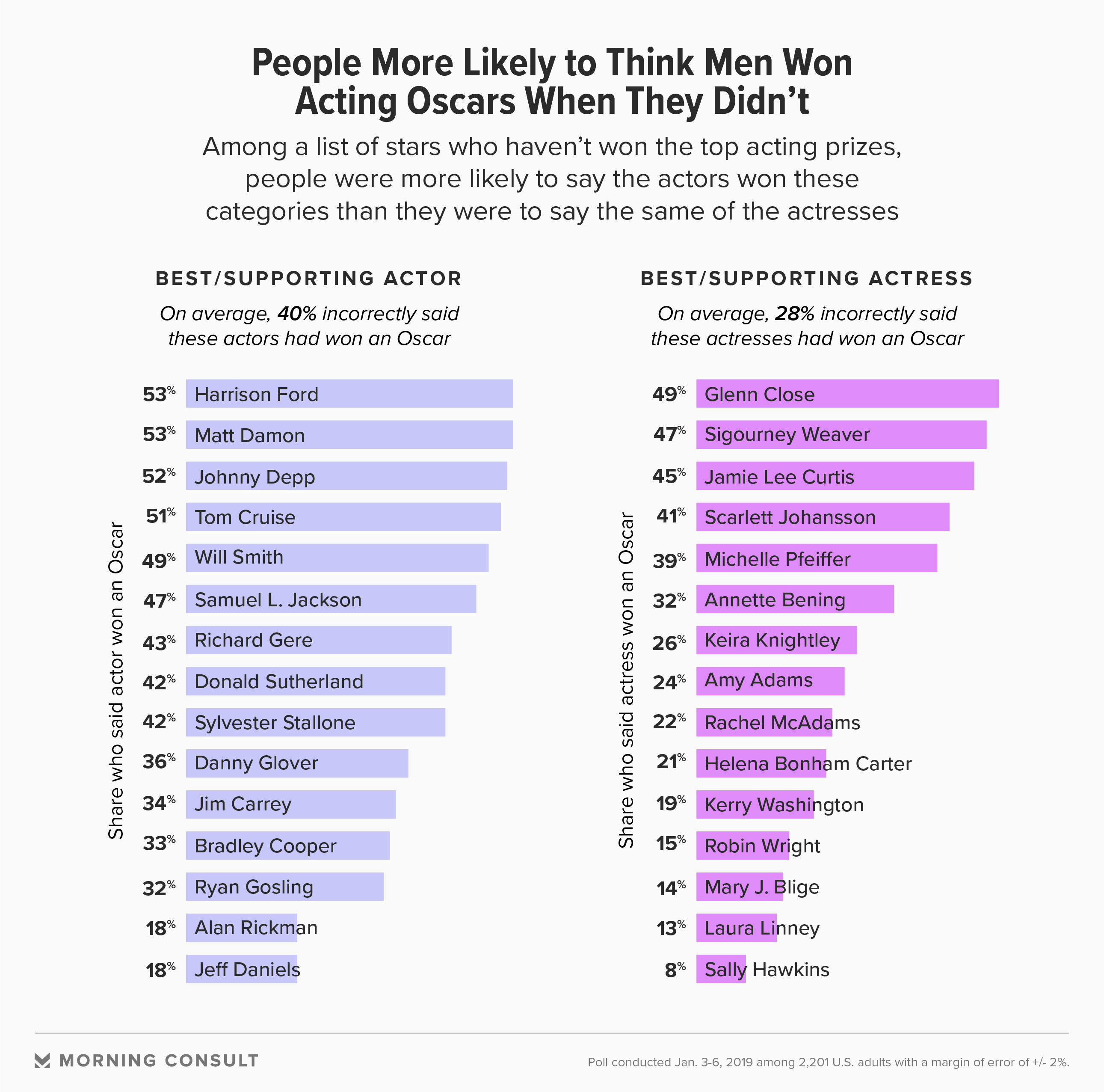 When tasked to identify which actors and actresses have won an Oscar for best actor/actress or best supporting actor/actress, 34 percent of respondents could correctly name Oscar winners from a list of past winners, such as Emma Stone and Mahershala Ali, as well as popular actors who have never won, including Johnny Depp and Amy Adams.

But the public on average was more likely to (incorrectly) crown actors, over actresses, who have not won Oscars with the best actor/actress or best supporting actor/actress titles. Forty percent said actors who hadn’t won an Oscar in these categories did, and 28 percent said the same about women.

When asked to contextualize this result, Olivieri had a simple answer: “The men have a higher profile overall.” Williams seconds this sentiment.

Men in the entertainment industry, at least, tend to have higher favorability. Just four of the top 20 entertainers on the Forbes 100 with the highest net favorability are women, according to Morning Consult’s Most Loved Entertainers. The top five are all men.