Northam spoke to reporters Saturday, denying that he is in the picture on his medical school yearbook page. (Alex Edelman/Getty Images)
By Eli Yokley

Voters in Virginia have soured on Gov. Ralph Northam (D-Va.) in the immediate aftermath of the blackface scandal that has many leaders, including top Democrats, calling for him to resign.

Morning Consult tracking found a 41-percentage-point drop in Northam’s net approval rating — the share of voters who approve of his job performance minus the share of those who don’t — in the two days after a page surfaced from the governor’s 1984 medical school yearbook showing a picture of one person in blackface and another dressed as a member of the Ku Klux Klan. 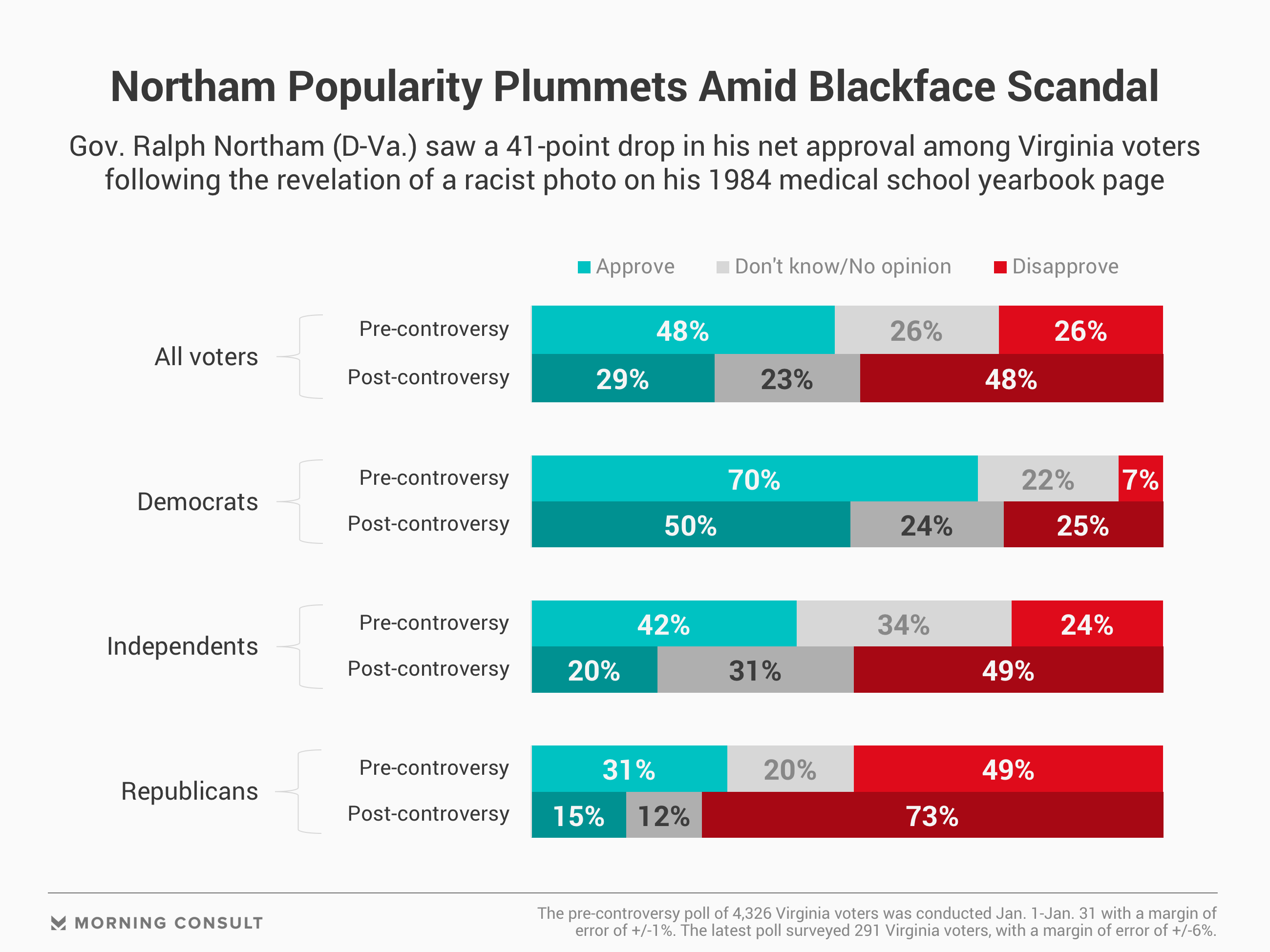 The shift was enough to move Northam from the top third of all U.S. governors in popularity — near Democrat Tim Walz of Minnesota or Eric Holcomb of Indiana — toward the bottom of the list, coming in around the 48th spot near Kentucky Republican Matt Bevin.

Despite calls for his resignation from leading Virginia Democrats such as Sens. Mark Warner and Tim Kaine — both former governors — as well as Rep. Bobby Scott and former Gov. Terry McAuliffe, Northam has said he intends to remain in the job. He told reporters Saturday that it was not him in the photo, but admitted to darkening his face on another occasion to resemble the performer Michael Jackson during a 1984 dance competition.

Northam, a former pediatric surgeon and Army doctor, was elected in 2017 with 54 percent of the vote, beating Republican lobbyist Ed Gillespie by 9 points and outperforming President Donald Trump’s 2016 vote share by roughly 10 points.

In the latest survey, Trump outperformed Northam among Virginians, with 43 percent approving and 52 percent disapproving of his job performance.

Among Virginia Democrats – who nominated the then-lieutenant governor in a competitive 2017 primary over former Rep. Tom Perriello by 12 points, 56 percent to 44 percent – Northam saw his net approval drop 38 points. Fifty percent approved in the latest survey, down 20 points from January, and his disapproval rose 18 points to 25 percent.

The governor suffered a steeper, 47-point drop in net approval among independents, with just 20 percent approving and 49 percent disapproving in the latest survey.

The subgroups have a large margin of error – plus or minus 10 points for Democrats and independents – but do reflect the downward trend demonstrated in the overall poll.

Northam is somewhat insulated from political pressure due to Virginia’s election laws, which bar governors from serving consecutive terms in office. However, Kyle Kondik, managing editor of Sabato’s Crystal Ball at the University of Virginia Center for Politics, said unpopular chief executives typically have a negative effect on the party.

“This is an unusual situation, with Northam quickly becoming a pariah in his own party,” he noted in a Monday email. Asked of future implications for Virginia Democrats, he said, “It’s just so hard to say – the gubernatorial situation is very fluid and the state elections are still many months away.”

Correction: A previous version of this article misstated the date that the January survey concluded.