A patient receives an influenza vaccination from a nurse practitioner at the CVS Pharmacy store's MinuteClinic on Oct. 4, 2018, in Miami, Fla. The United States is projected to spend $5.96 trillion on health care by 2027, a 19.4 percent share of gross domestic product, according to a new report from the Centers for Medicare and Medicaid Services’ Office of the Actuary. (Photo by Joe Raedle/Getty Images)
By Yusra Murad

The United States is projected to spend $5.96 trillion on health care in 2027, a 19.4 percent share of gross domestic product, according to a new report from the Centers for Medicare and Medicaid Services’ Office of the Actuary, which was published in Health Affairs.

National health expenditures are anticipated to grow at an average of 5.5 percent per year from 2018 to 2027, fueled primarily by demographic and economic changes as Americans grow older and approach the Medicare age of eligibility, according to the report. As a large share of the baby boomer generation shifts to Medicare, annual growth in Medicare spending is anticipated to average 7.4 percent over this period, compared to 5.5 percent for Medicaid and 4.8 percent for the private market. 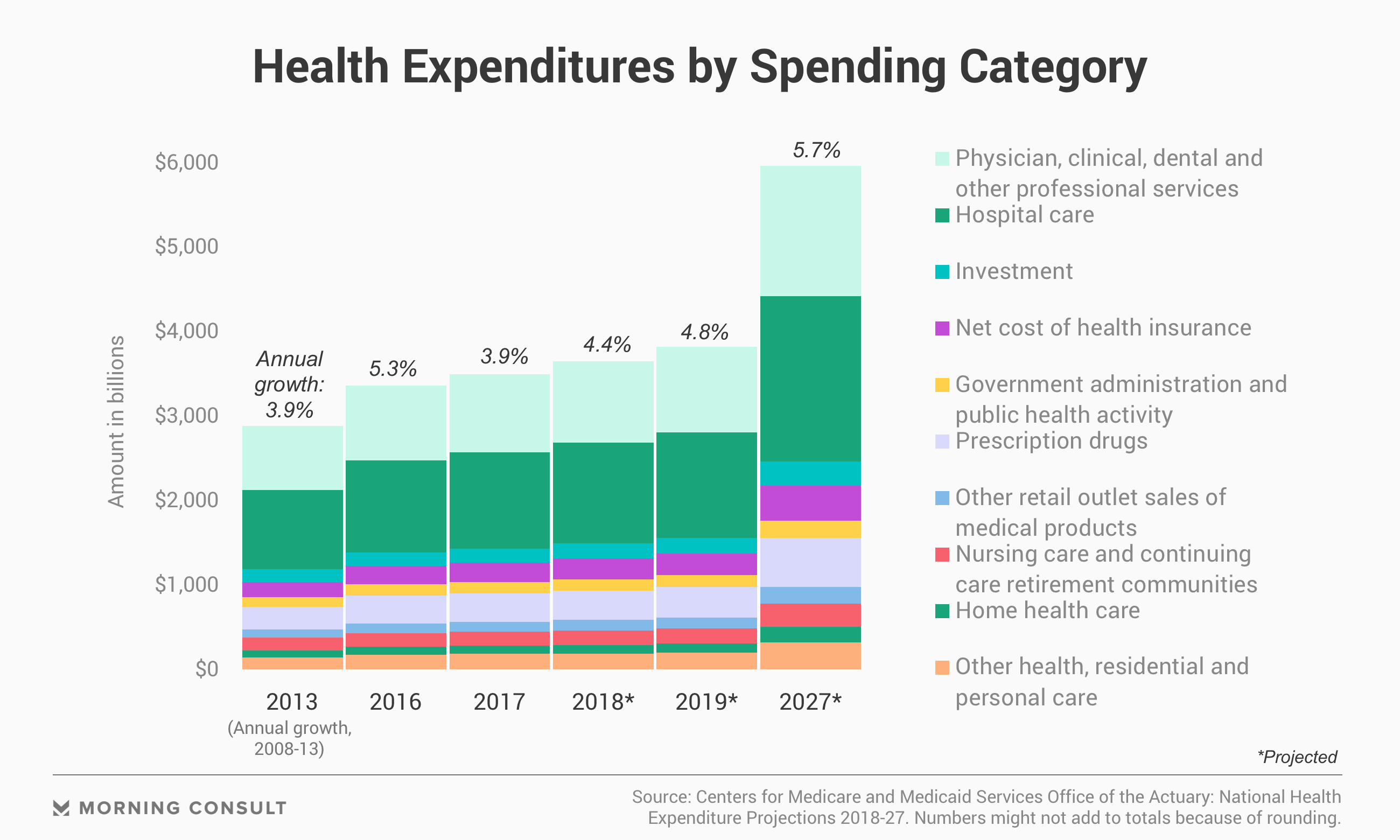 The study does not predict any significant change in the rate of uninsurance — about 10 percent — by 2027.

Andrea Sisko, an economist at the National Health Statistics Group in CMS’ Office of the Actuary, said on a call with reporters Wednesday that the projections are rooted in current law and assumptions from the 2018 Medicare Trustees report. They do not take into account any estimated impact of current policy proposals

From 2018 to 2027, growth in health expenditures is expected to outpace annual GDP growth by 0.8 percentage points on average. 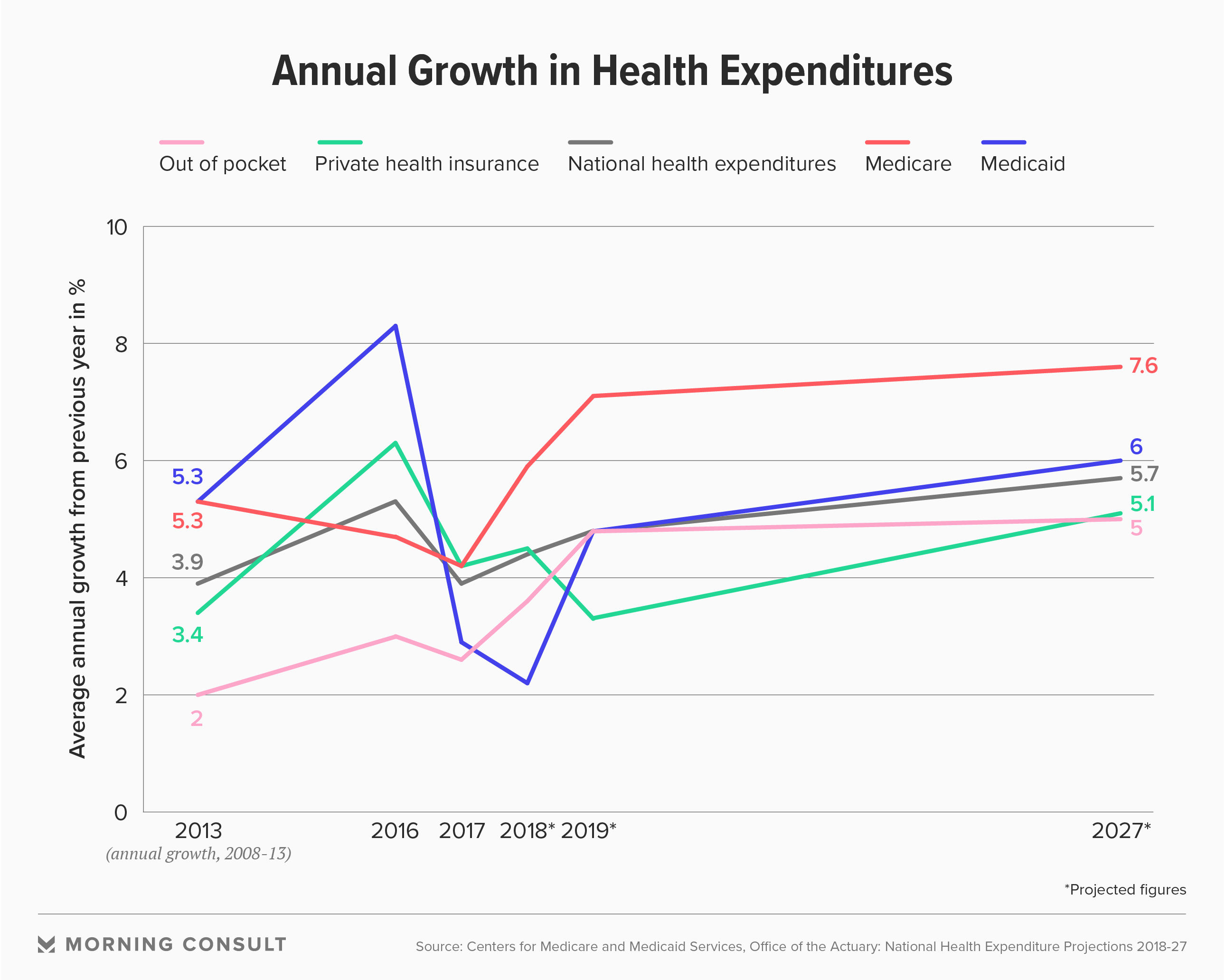 While the Great Recession and implementation of the Affordable Care Act heavily influenced spending patterns over the last decade, a different slate of factors will be responsible for rising spending levels in the decade to come, the study’s authors noted. Some of these factors derive from wider macroeconomic trends, such as changes in income growth, which are predicted to exert the most notable influence on private insurance and out-of-pocket spending.

In addition, the authors predict accelerating growth in the prices of medical goods and services. While health care prices remained fairly low during the Great Recession and the 2014-16 period, Sisko predicted economy-wide inflation will not spare prices during the projection period. 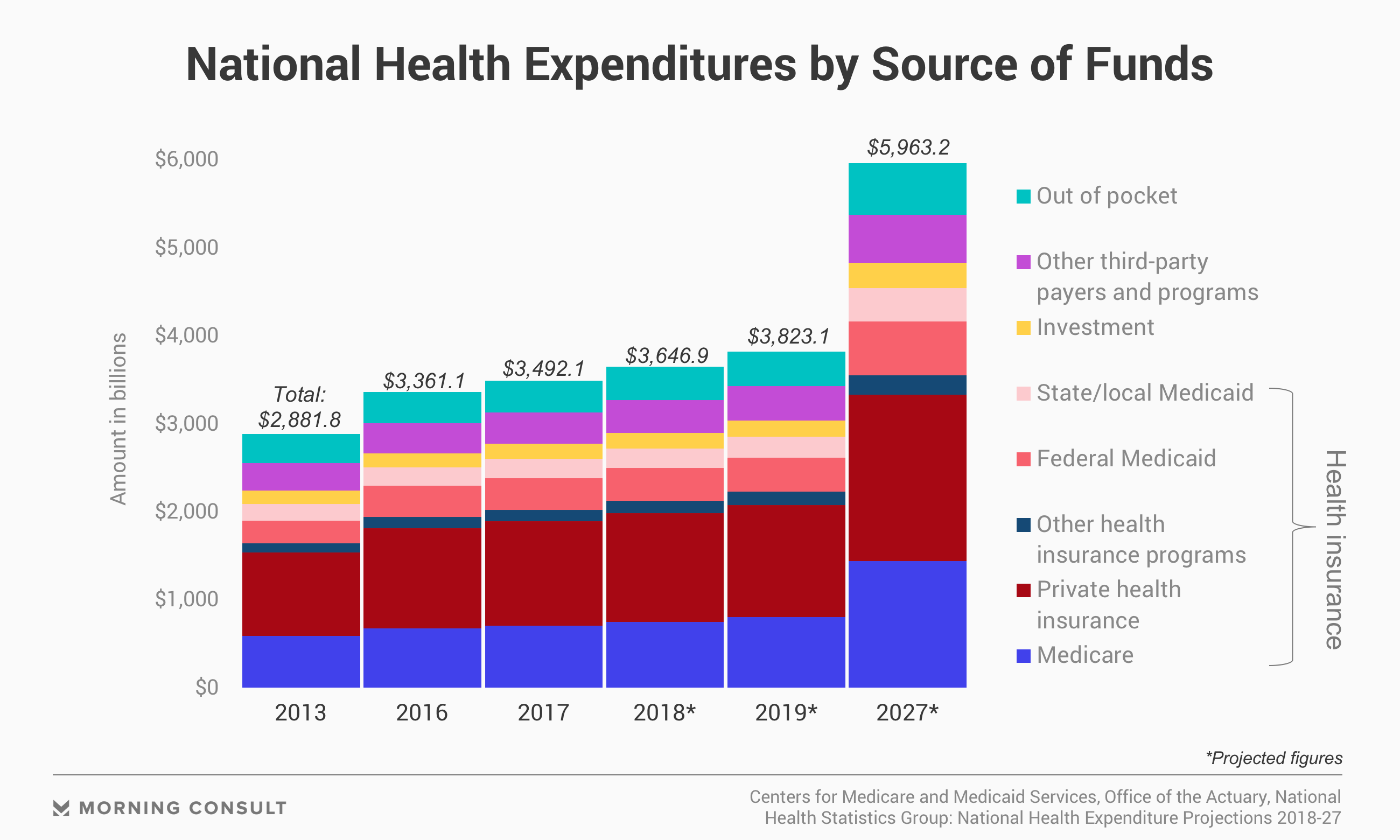 The report also predicts a higher rate of Medicaid enrollment in 2019 as states continue implementing Medicaid expansion, alongside a slight increase in the uninsurance rate as a consequence of the repeal of the Affordable Care Act’s individual mandate. Both factors simultaneously contribute to the projected increase in health care spending for 2019.

Related: In Oklahoma, A Warning for Proponents of Value-Based Pharma Payment

This story has been updated to include a link to the study published in Health Affairs.