12% of primary voters pick California senator as first choice for president, up 6 points from before debate

Sen. Kamala Harris speaks to the media on June 27 after the Democratic presidential debate in Miami. Her standing among potential Democratic voters increased after the event, according to Morning Consult polling. (Joe Raedle/Getty Images)
By Cameron Easley

Last week’s Democratic presidential debates provided the first real chance for many of the candidates to shake up the race, and it’s Sen. Kamala Harris (D-Calif.) who seized the moment.

Twelve percent of Democratic primary voters said Harris was their first choice for president in the latest Morning Consult survey, which collected 2,407 responses from the moment Thursday’s debate ended at 11 p.m. through all of Friday. It’s an increase of 6 percentage points from the June 17-23 poll, doubling the senator’s vote share.

That vaults her past South Bend Mayor Pete Buttigieg of Indiana and into a third-place tie with Sen. Elizabeth Warren of Massachusetts. 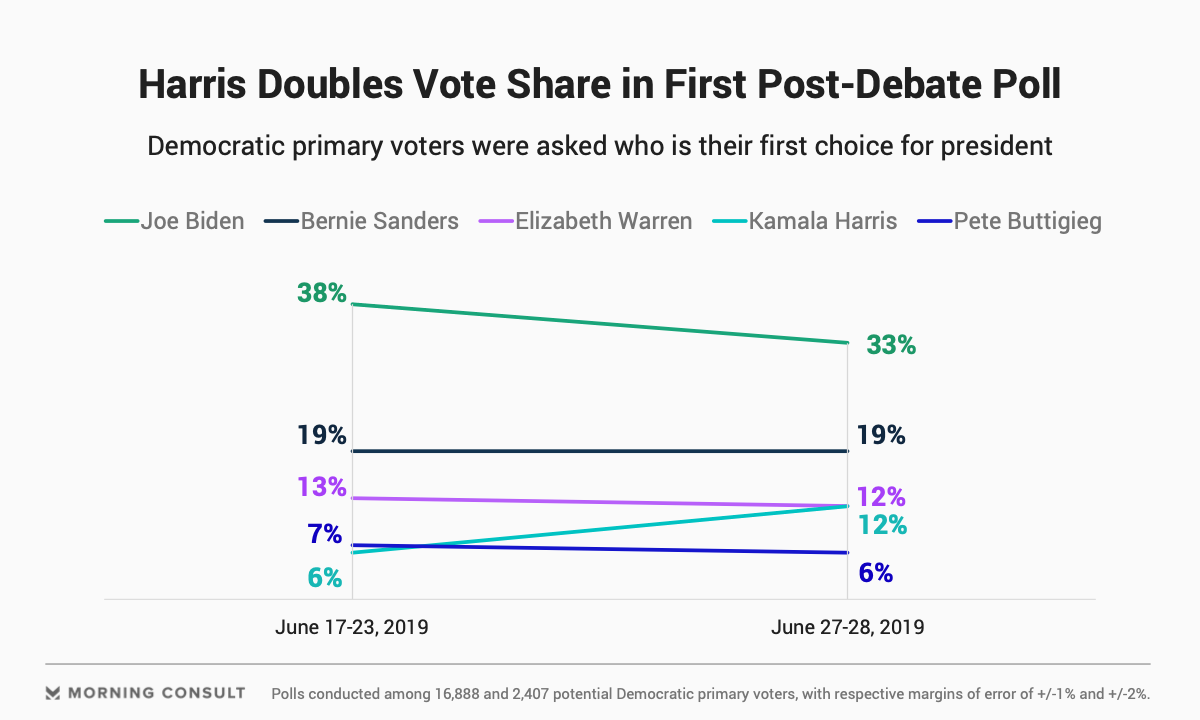 The survey indicates that Harris’ big night in Miami came largely at the expense of the race’s front-runner, former Vice President Joe Biden, who faced a withering attack from the 54-year-old senator over his decades-old opposition to federally mandated busing of black students as a means of racially integrating public schools. Biden’s support dropped by 5 points, although he remained the first choice for 33 percent of Democratic primary voters.

Thursday’s debate also brought middling returns for Sen. Bernie Sanders (I-Vt.), who did not lose any first-choice support (at 19 percent) but was the only high-profile candidate to experience a measurable drop in favorability.

Sixty-seven percent of Democratic primary voters in the latest poll said they had a favorable view of Sanders, down 7 points from the previous survey. While some of the other more well-known candidates such as Biden and former Rep. Beto O’Rourke of Texas saw their favorability decline, those dips were inside the poll’s 5-point margin of error on that question.