More than a quarter of adults are at least monthly listeners 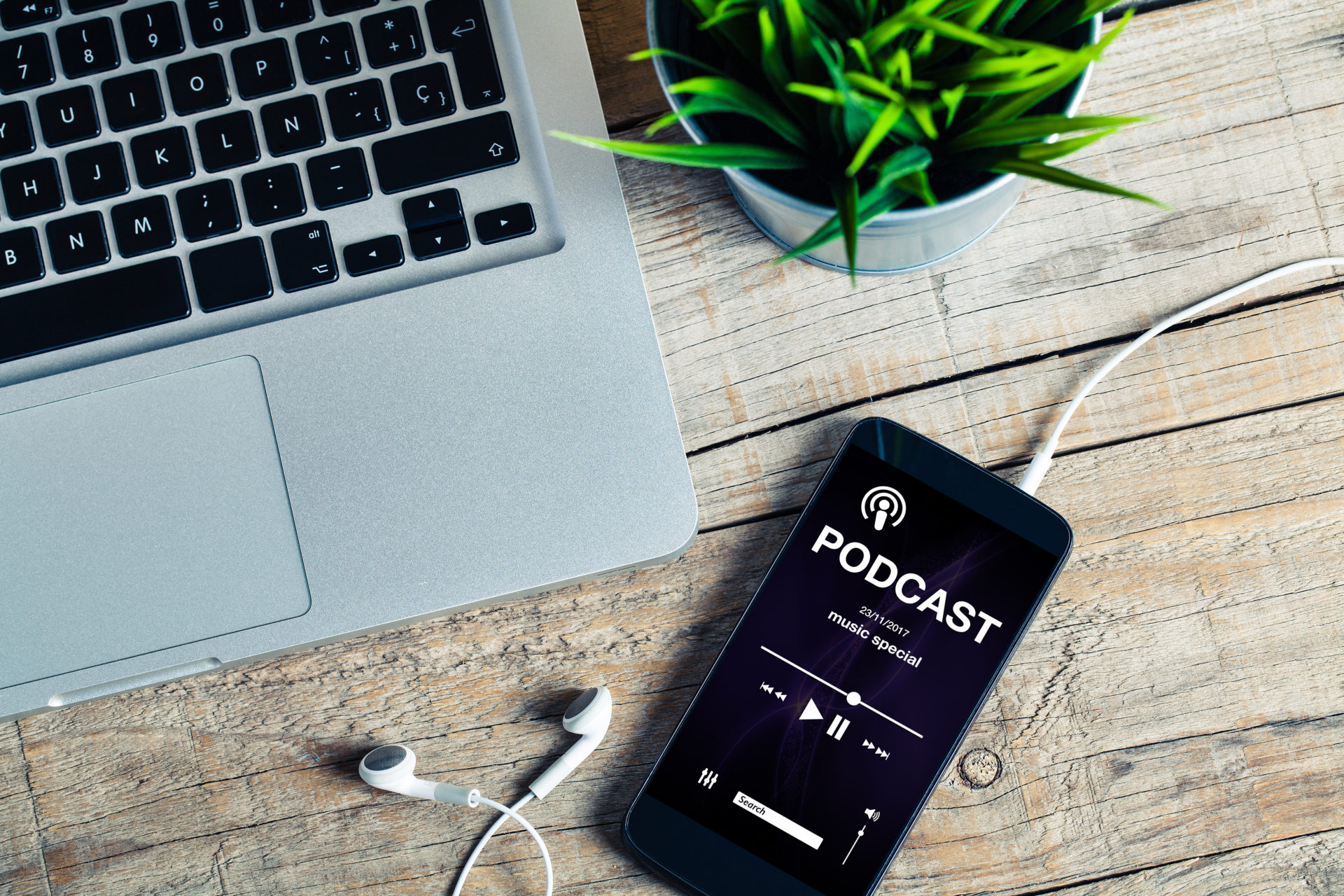 Music podcasts were found to be most likely to appeal to the public in a new Morning Consult/The Hollywood Reporter poll.
By Sarah Shevenock

Podcasts appear to be the hot new medium in the entertainment industry, with celebrities launching their own programs, Spotify Technology SA acquiring big name podcasting companies and Hollywood tapping into podcasts to create a new wave of prestige television shows. While new data shows that more than a quarter of the public listens to podcasts at least once a month, it also offers clues as to how the industry can draw in new listeners and give current ones more of what they are looking for in their audio entertainment.

Spotify has been making moves in the podcast realm this year, announcing in February that it had acquired podcasting companies Gimlet Media Inc. and Anchor in a deal worth roughly $340 million, as well as snatching up podcast storytelling studio Parcast in March. In its most recent earnings report, Spotify said that its podcast audience grew by 50 percent quarter over quarter, with “tens of millions of users” streaming podcasts monthly.

And new polling indicates there’s plenty of room for growth: A July 25-27 Morning Consult/The Hollywood Reporter survey of 2,201 U.S. adults found that 28 percent of the public — including 44 percent of those ages 18-29 — listens to a podcast at least once a month. However, more than half of all respondents (54 percent) said they never listen to podcasts, and just 10 percent said they listen at least several times a week. 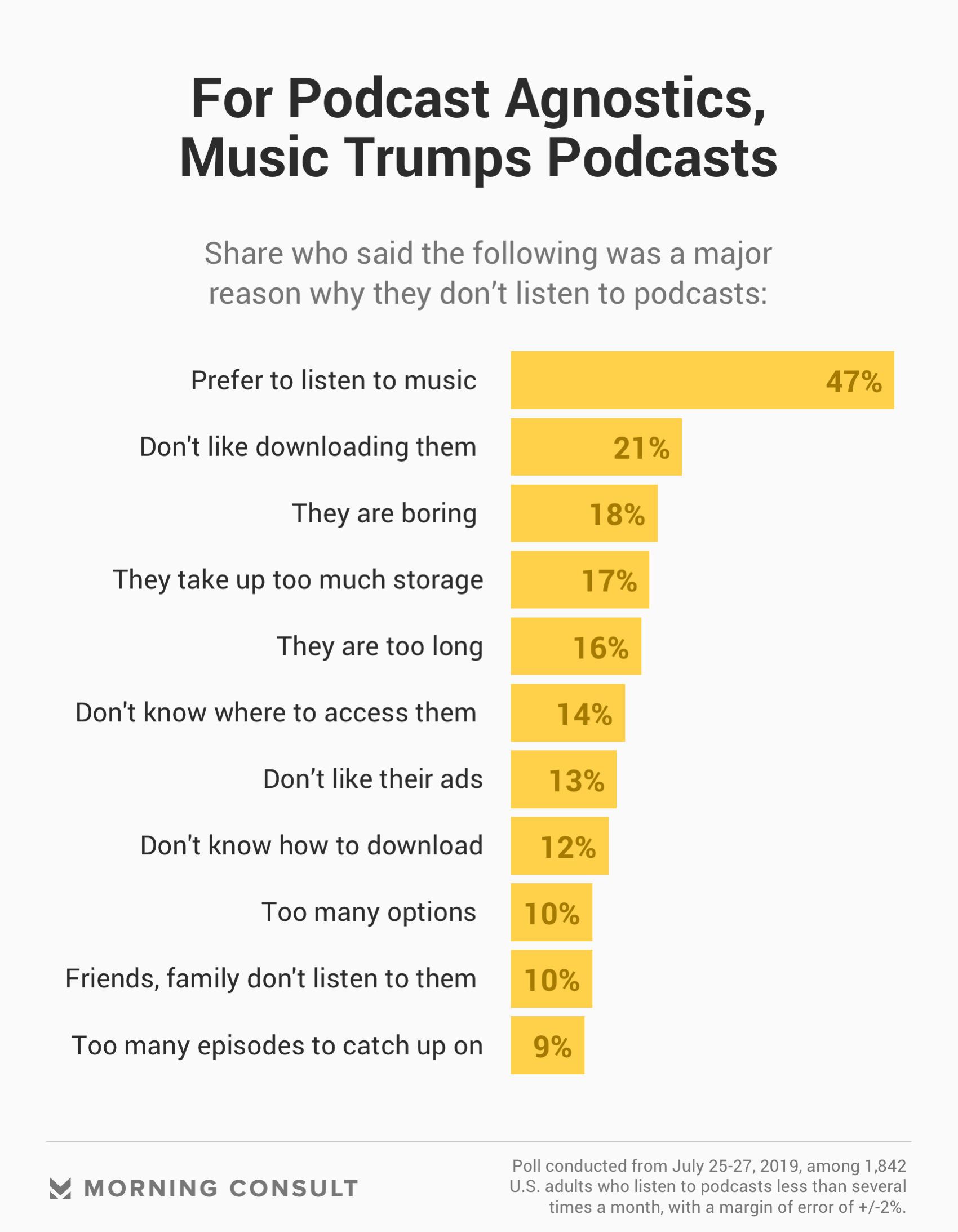 For those who listen to podcasts a few times a month or less, 47 percent said a major factor was a preference for music, while more than one-fifth (21 percent) said they didn’t like downloading podcasts to their phone or computer, and 18 percent said they found the programs to be boring.

Podcasts focused on music were the most popular genre, with 60 percent of respondents saying they found that genre appealing. Comedy (57 percent) and local news (49 percent) rounded out the top three. 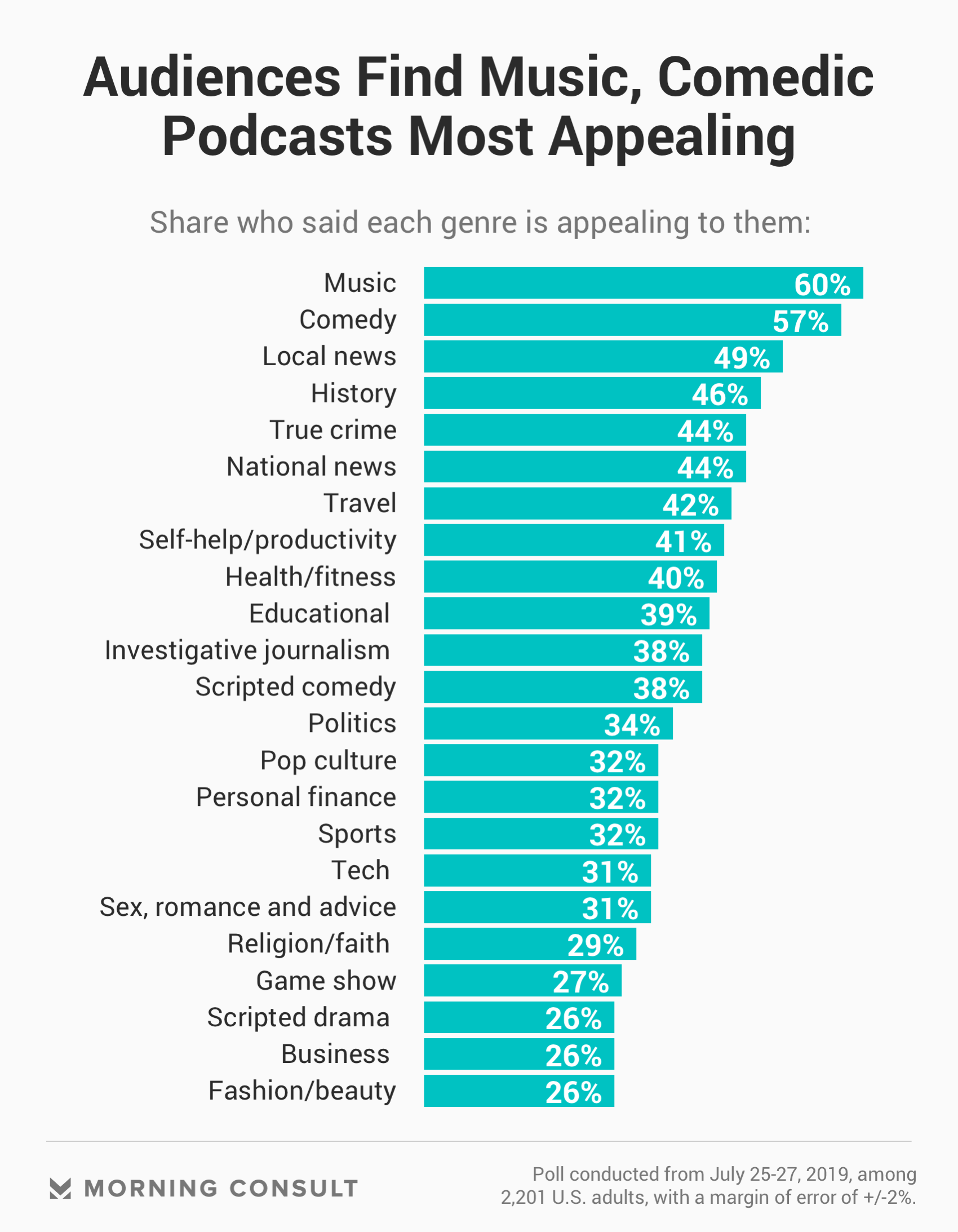 As of July 31, the No. 1 podcast on Apple Inc.’s podcast charts was “Room 20,” an investigative podcast from L.A. Times Studios. “The Clearing,” a podcast about a woman learning her father was a murderer, produced by Pineapple Street Media in association with Gimlet, was second on the charts. Only one scripted podcast — QCODE’s “Carrier” — was in the top 10.

Notable actors and actresses have been exploring involvement in dramatic podcasts: For example, Oscar Issac, David Schwimmer and Catherine Keener all lent their voices to Gimlet’s “Homecoming,” which debuted in November 2016, while recently launched subscription service Luminary is featuring a musical show with Patti LuPone and John Cameron Mitchell.

And in addition to lending talent, Hollywood is tapping into podcasts as another source of intellectual property. At the end of 2018, Amazon.com Inc. premiered the Julia Roberts-led “Homecoming,” while Bravo launched “Dirty John” starring Connie Britton, with both shows earning Golden Globe nominations earlier this year. More television shows based off podcasts are in development — with FX working on shows based on “Welcome to Night Vale” and “Crimetown,” NBC adapting “The Black Tapes” and “Alice Isn’t Dead” in development at USA.