Brands should be concerned by attacks from leading politicians, experts say 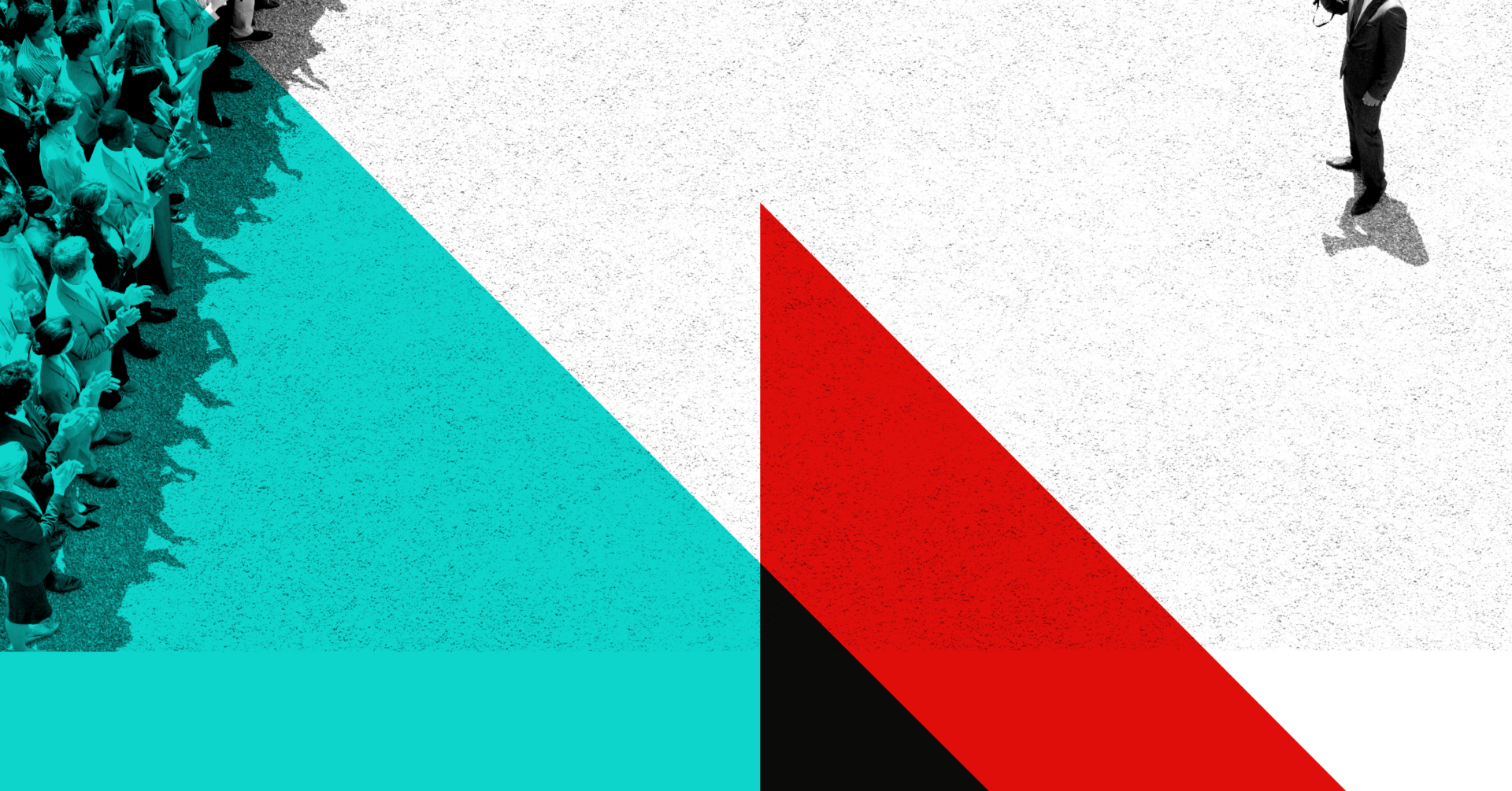 Companies have faced blistering public criticism from politicians in the era of Donald Trump, eliciting concerns from brands and their investors about the impact on their reputation and bottom line.

While majorities of Americans say their views about a brand would not be altered by criticism from prominent public officials, a small but meaningful share of the public says they would, in fact, heed a boycott call from top politicians and even more would have their views impacted, according to a new Morning Consult/Advertising Week poll. 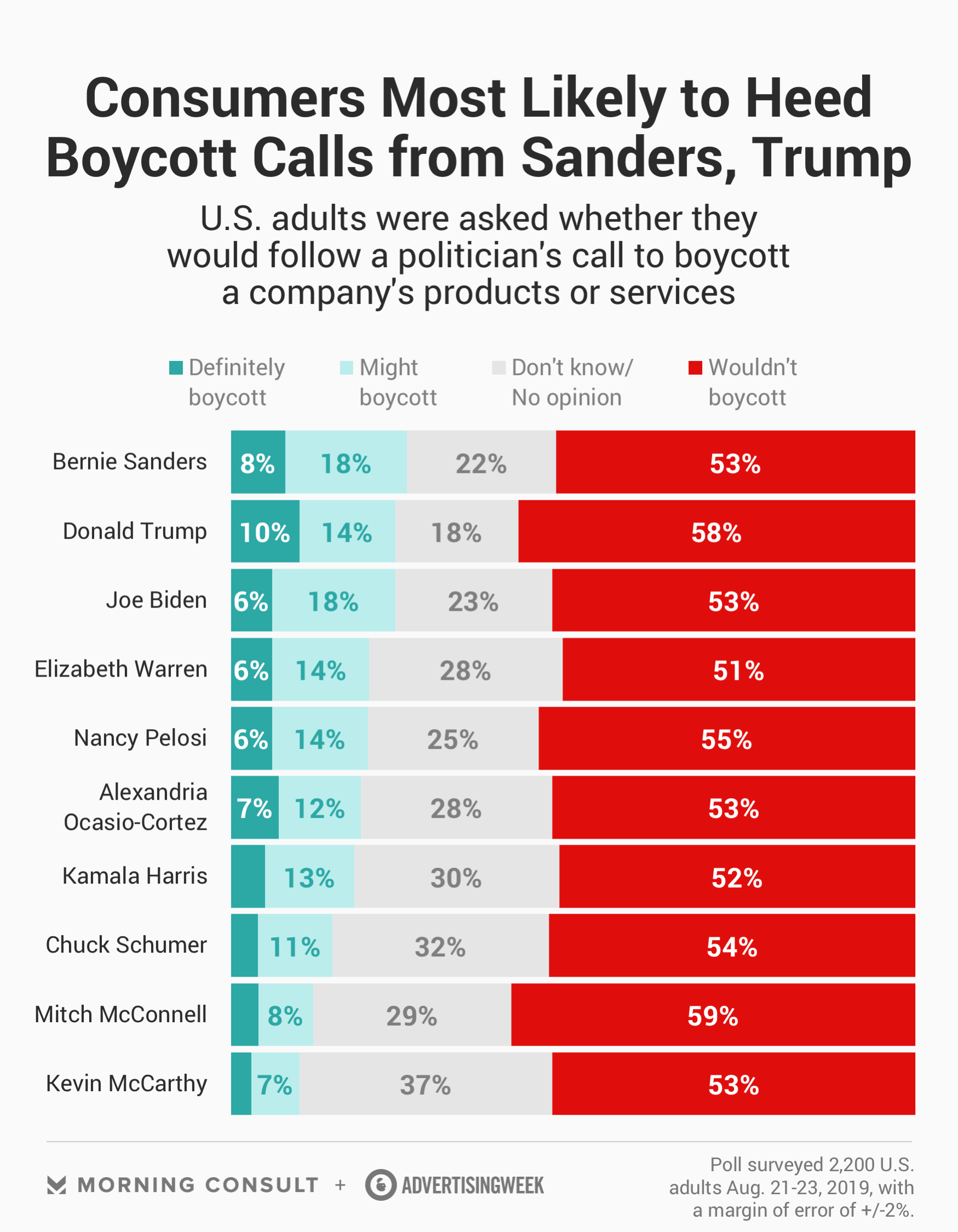 The impact of other high-profile politicians followed a similar trend, while lesser-known public figures were less likely to move the needle.

Ron Bonjean, a Republican strategist who works on corporate public relations as a partner at ROKK Solutions, said 10 percent may seem small in political polling, where majorities are the goal to build a winning coalition, but the figure is large when thinking about a company’s consumer base.

“If 1 in 10 customers said they would definitely boycott a company, that’s 10 percent of a company’s market,” he said. “For brands, taking a 10 percent hit would be significant to your bottom line. It’s something you’d really prefer to avoid.”

Mimi Chakravorti, executive director of strategy at the brand consulting and design firm Landor, said that datapoint would be of greater concern for corporations competing in larger markets.

“If you’re a Ford, for example, it’s in a different position than a SoulCycle or an Equinox,” she said, referring to the cycle studio and gym company that faced boycott calls last month after news emerged of one of the company’s owners throwing a fundraiser for Trump. “Ford is a mass-market brand, verses SoulCycle or Equinox that are very much urban or upper-end middle-class brands.”

Trump, who made a habit of promoting boycotts with his Twitter account before he took office, hasn’t shied from using the presidential stage against businesses. Early in his presidency he attacked Nordstrom Inc. for dropping his daughter’s clothing line, and a year ago he praised a movement to boycott Harley-Davidson Inc. for attempting to insulate itself from his trade conflict with the European Union.

His criticism of companies by name has continued. Last month, he took a swipe at Ford Motor Company for abiding by California emissions standards as his administration has sought to weaken federal regulations, and in January he mused about what would happen if people dropped their AT&T Inc. subscriptions.

Prominent Democrats have also used their platforms to criticize major brands. Amazon.com Inc. has become a scapegoat for prominent Democrats such as Sanders and even former Vice President Joe Biden, while Sen. Elizabeth Warren (D-Mass.) has name-checked Amazon and other prominent tech companies, including Facebook Inc. and Alphabet Inc.’s Google, over concerns about their “monopolistic power.”

There was little difference between Americans overall and consumers of various income and education levels when it came to whether they’d follow a directive to boycott a company. And while self-identified liberals were more likely than the overall population to say they’d follow a boycott call from a Democratic politician, the effect was mirrored with conservatives and the president.

Bonjean said companies in the retail, technology, finance and health care industries are particularly susceptible to criticism from politicians, but cautioned that the lasting power of their critique hinges in part on how concerted it is and how easy it is for consumers to find a different product.

“To actually boycott, you have to be really pissed off, and you have to have an alternative,” he said.

More than boycotts, the survey found political figures can affect consumers’ opinions about brands. Three in 10 adults said Sanders’ criticism would impact their views about a company, while 27 percent said Trump’s criticism would have an effect.

Ben LaBolt, a partner at Bully Pulpit Interactive who worked as the national press secretary for President Barack Obama’s 2012 re-election campaign, said companies are smart to invest in marketing intended to protect their reputation with the target consumers most vulnerable to appeals from elected officials and others who would try to “jawbone” them with criticism.

“They can inoculate themselves to a great extent by building up a strong reputation with those persuadable consumers over time,” he said.