The Toll of Student Debt Goes Beyond Failing to Build Wealth

Borrowers more likely to delay or avoid buying a home, getting medical care, than adults without student debt 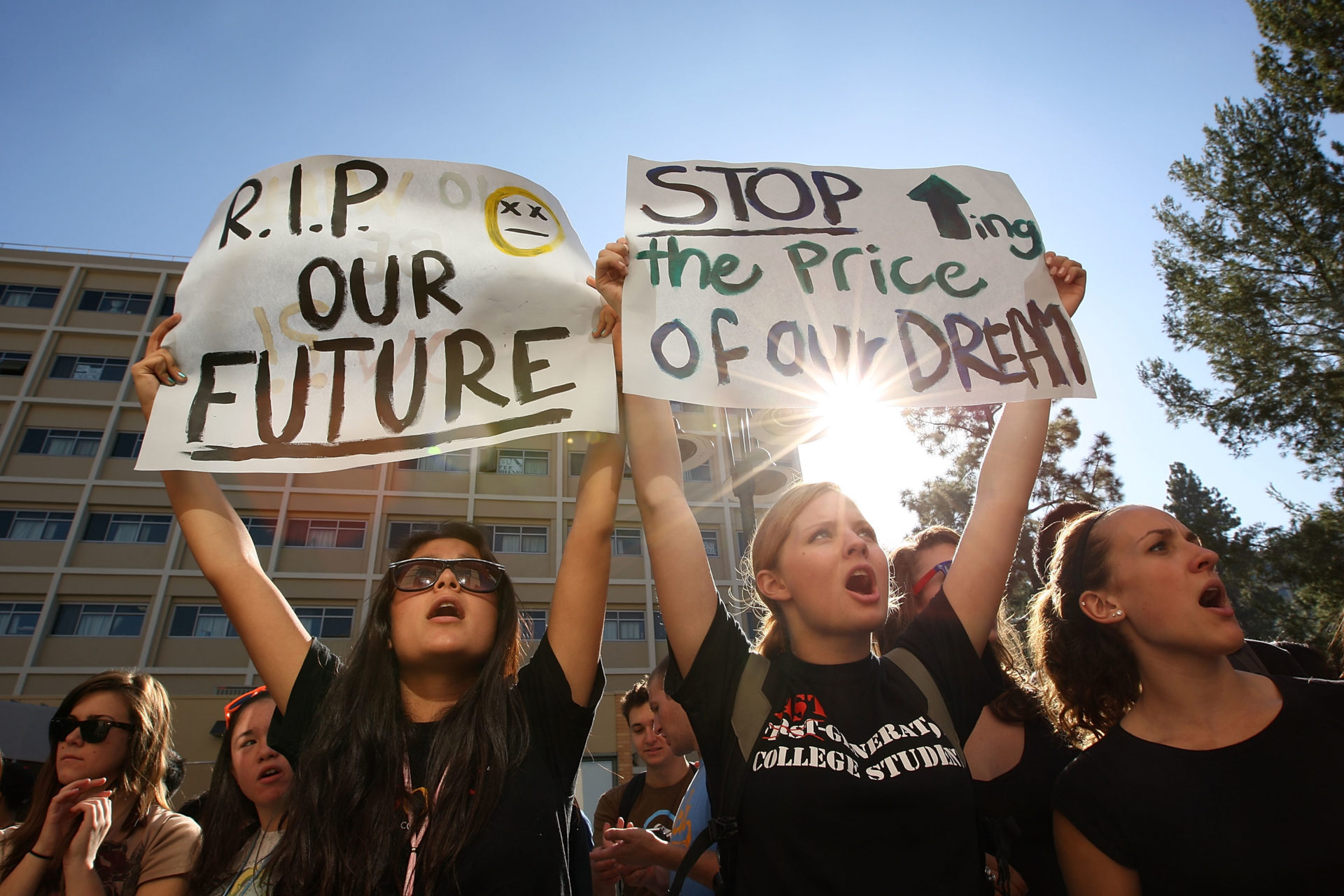 UCLA students protest a tuition hike Nov. 19, 2009 in Los Angeles. A Morning Consult survey found that adults who carry student debt are more likely to say they have delayed or avoided a number of life milestones. (David McNew/Getty Images)
By Claire Williams

Higher education — long billed as one of America’s most straightforward paths to the middle class — appears to be dealing a harsh financial blow to student loan borrowers.

People who carry student debt are more likely to say they have delayed or avoided a number of life milestones, or put off activities that could hurt their ability to remain financially and physically fit, according to a recent Morning Consult/Insider survey.

Student debt held by Americans ballooned to nearly $1.5 trillion by the end of the second quarter in March 2019, more than two times what Americans owed a decade earlier. While college graduates can still expect to earn a higher salary than those who didn’t attend university, the student debt problem is increasingly making its way into the national conversation as an economic issue and political talking point.

“It’s not just about getting a degree; it’s also about what position you’re in when you get that degree,” said William Elliott, a professor of social work at the University of Michigan who studies student debt. “Developing policy along these lines is very much along the lines of the American dream. After all, those who have capital beget capital.”

The long-term reach of America’s student debt problem is still very much an open question, as the first generation of heavily student debt-laden workers are now making decisions about having children, home ownership and long-term wealth building.

“College costs have risen quite a bit, even in my lifetime,” said Fenaba Rena Addo, a visiting assistant professor at Duke University’s Sanford School of Public Policy who also studies student debt. “During the critical time in young adulthood, if you’re paying off debt, then you’re not saving to buy a house or make investments.” 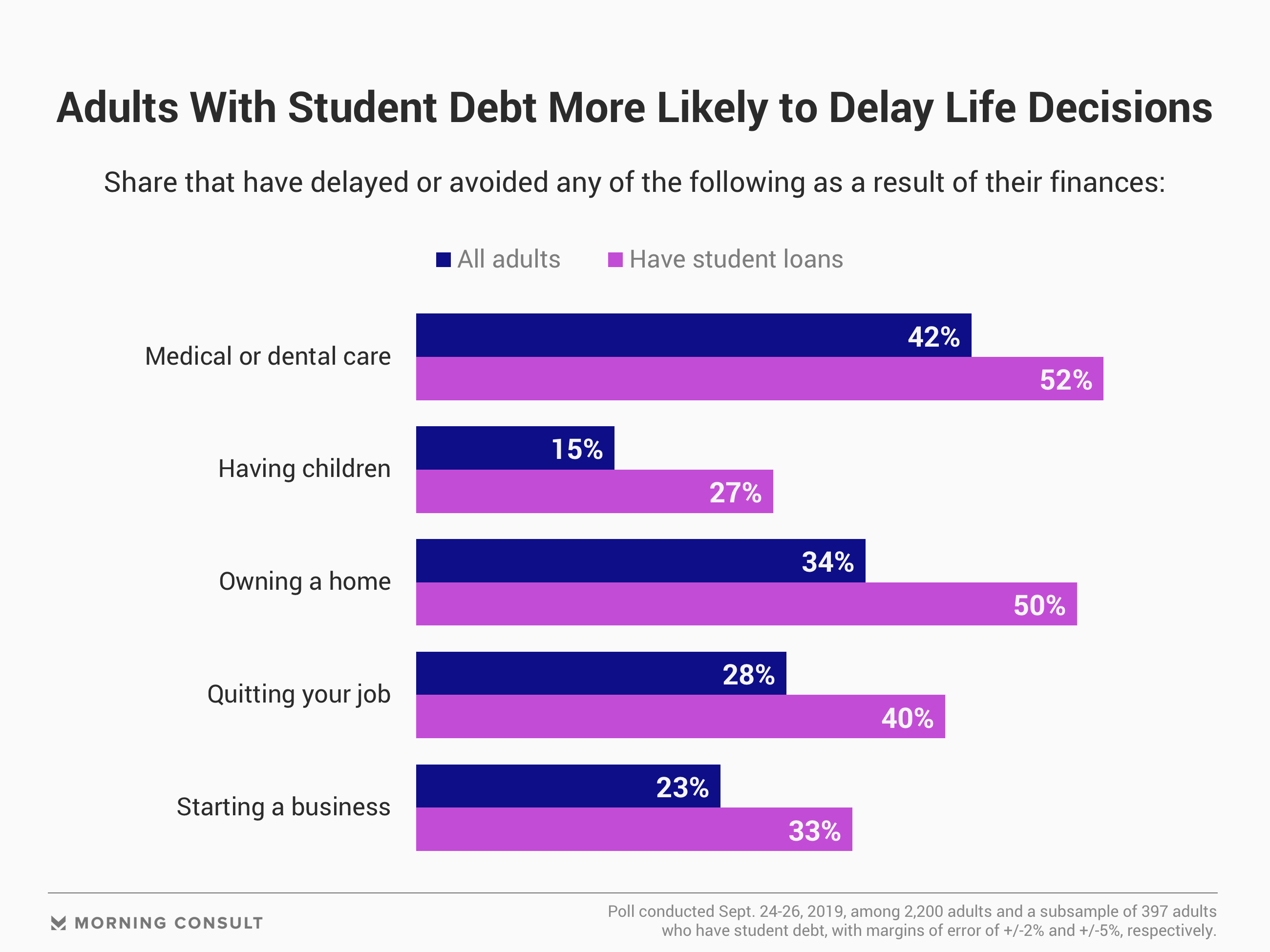 The Morning Consult survey’s largest spread among all adults and those who have student loans — delaying or avoiding home ownership — is also one of the most common ways to build wealth in the United States. While 34 percent of the overall adult population say it has pushed back home ownership because of finances, 50 percent of student loan borrowers say the same.

“If we’re delaying people’s ability to engage in the fundamental ticket to the middle class, it has all kinds of effects down the line,” said Mark Huelsman, associate director of policy and research at the liberal think tank Demos. “That’s from delayed retirement, being able to deal with financial emergencies and ability to move in the labor market.”

The poll surveyed 2,200 U.S. adults from Sept. 24-26 and has a margin of error of 2 percentage points. The subset of adults who currently hold student debt totaled 397 respondents and carries a 5-point margin of error.

More than half (52 percent) of the adults with student debt surveyed said they have delayed medical or dental care as a result of their finances, compared to 42 percent of the overall population. In the long term, that could mean sacrificing physical health, or at the very least paying more in health care costs with age, Elliott said.

Related: The Next Recession Looms Largest for the Youngest Americans

Student debt could also mean less economic freedom to leave a high-paying job that’s a bad fit, or jump into a career path that might be low-paying upfront, but pay off down the line, he said.

“We really have reached a critical point in this debate in which student debt is a central economic issue and central kitchen table topic for families,” Huelsman said. “You don’t go from $200 billion of student debt 15 years ago to $1.5 trillion today without that affecting everyone’s day-to-day finances.”