Come on boys, vogue! The youngest generation’s greater willingness to embrace nontraditional gender norms has opened up a new market within the beauty industry: men’s makeup.

One-third of young men said they would consider wearing makeup, according to Morning Consult polling, while 23 percent of all men said the same. Founders of men’s cosmetic brands credit the increased interest among young men not only to a wider acceptance of the idea that gender is fluid but also to the pressure to be picture perfect at any moment, thanks to social media.

“The stigma associated with buying and purchasing this product is starting to diminish,” said Andrew Grella, founder and CEO of the men’s makeup brand Formen Inc., with the country’s youngest consumers taking up the mantle of socially normalizing men’s use of cosmetics. 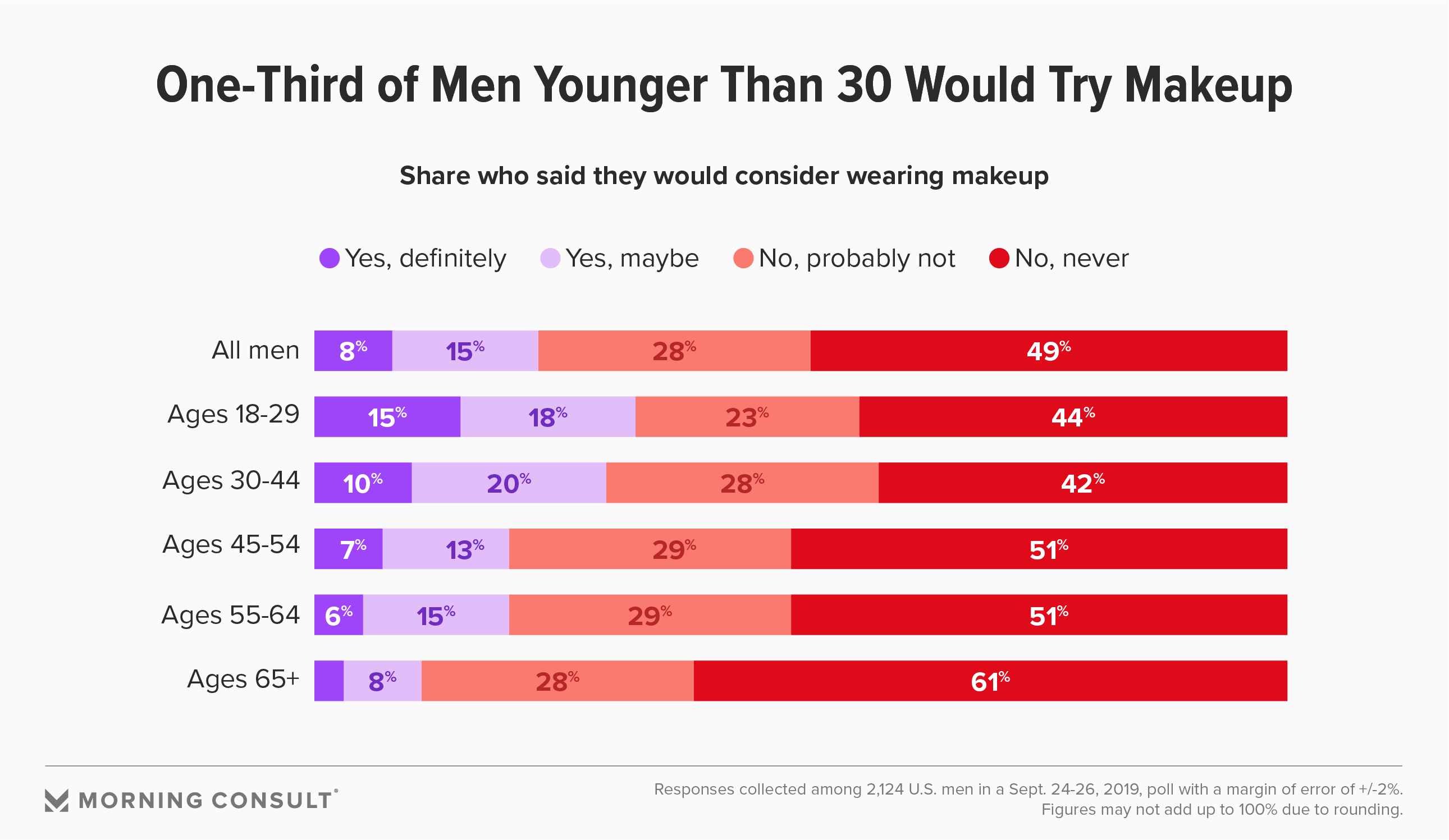 Thirty-three percent of men ages 18-29 said they would consider wearing makeup, while another 30 percent of men ages 30-44 reported said they’d be open to the idea as well. The data collected from 2,142 men in a Sept. 24-26 survey of 4,400 U.S. adults has a margin of error of 2 percentage points.

Men have dabbled with makeup throughout modernity, but it’s only recently that men’s cosmetics has slipped into the mainstream. In August 2018, Chanel debuted a line of men’s makeup, called Boy de Chanel, that includes a foundation and an eyebrow pencil. CoverGirl named social media influencer James Charles as the first male face of the brand in October 2016, and Maybelline followed suit three months later when it made Manny Gutierrez, another influencer, as its first male New York ambassador. A Google Trends graph of online searches for “men’s makeup” shows a greater interest in the topic in the last few years.

“The rise of social media, and just the ubiquity of it, should not be underplayed,” said Devir Kahan, co-founder of the men’s makeup brand Stryx. Every moment is capturable — and postable — for the generations who have grown up with smartphones in their hands and new definitions of privacy.

“You’re taking selfies and sharing videos and on FaceTime — meaning you never know when you’re going to need to be ‘camera ready,'” Kahan said.

The anonymity and discretion that comes with online shopping, which still only accounts for about 10 percent of all retail sales, has also helped fuel the sub-industry, Formen’s Grella said.

However, he’s now seeing a segment of male consumers ready to emerge from the privacy of their bathrooms and shop in spaces, such as pop-up stores or stand-alone shops, specifically meant to sell makeup to men. 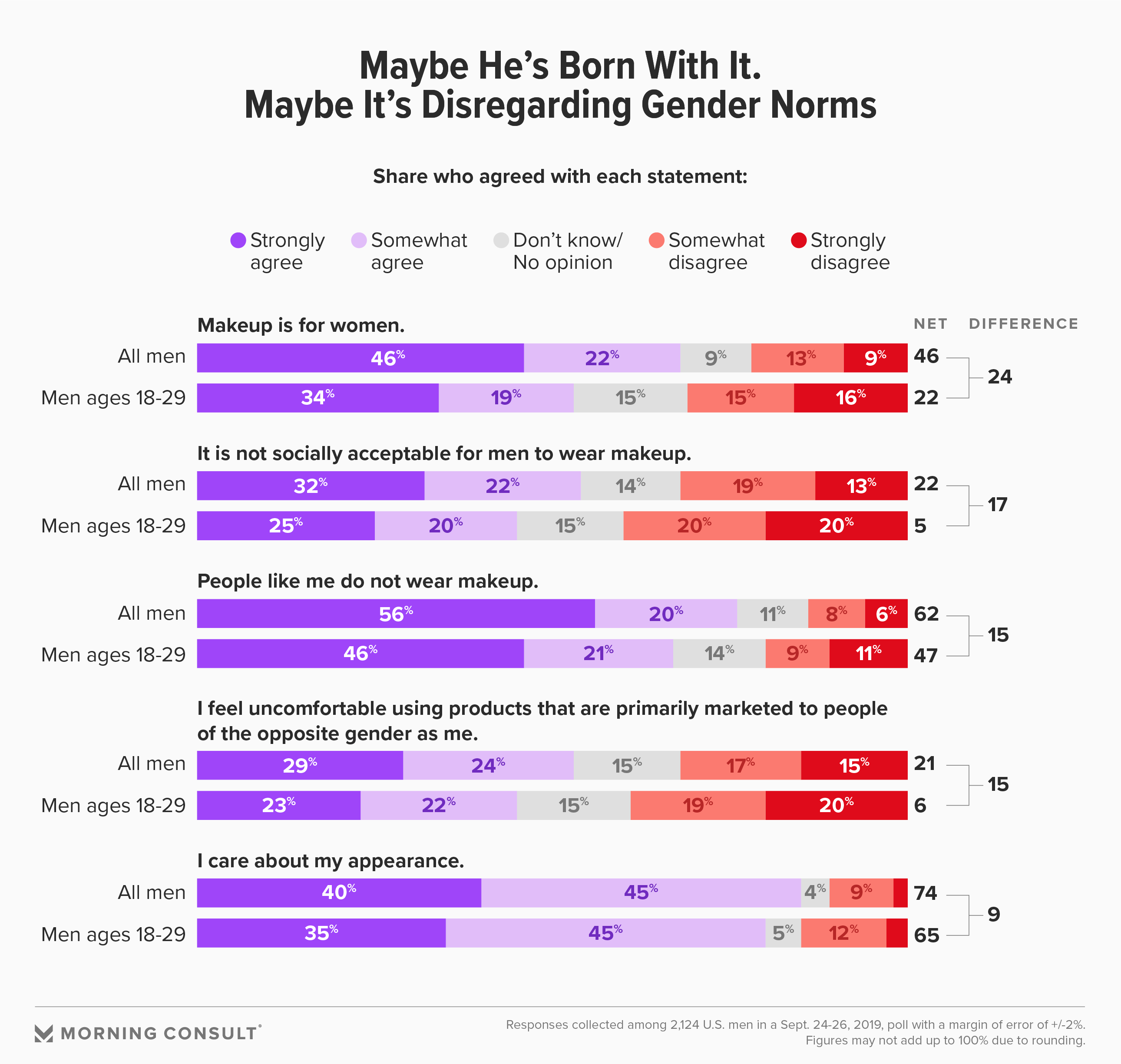 Young men’s attitudes about beauty differ from their male peers overall, according to the survey, although there’s widespread agreement on caring about one’s appearance. Men ages 18-29 are more likely than their elders to reject the idea that it’s taboo for men to wear makeup and they are less likely to report discomfort over using products primarily marketed toward the opposite gender. Younger men are also 15 points less likely to agree that makeup is for women.

Male influencers who apply makeup are also becoming more prevalent. Six of the 25 top beauty influencers on a February 2019 list from Izea Worldwide Inc., a technology platform that connects marketers with influential content creators, were men. That included makeup maven Jeffree Star, who was among the highest-paid YouTube stars, according to Forbes’ 2018 ranking, with $18 million in earnings.

But there’s an important distinction between the makeup tutorials Star creates and the products sold by brands such as Formen and Stryx. Star usually wears a full face of makeup, jewel-toned eyeshadows and fake nails; the products sold by most men’s makeup brands are strategically low-key and largely used to cover up “imperfections.”

“We’re doing products that fix the issues on the face” such as scars, discoloration or everyday blemishes, said Grella. 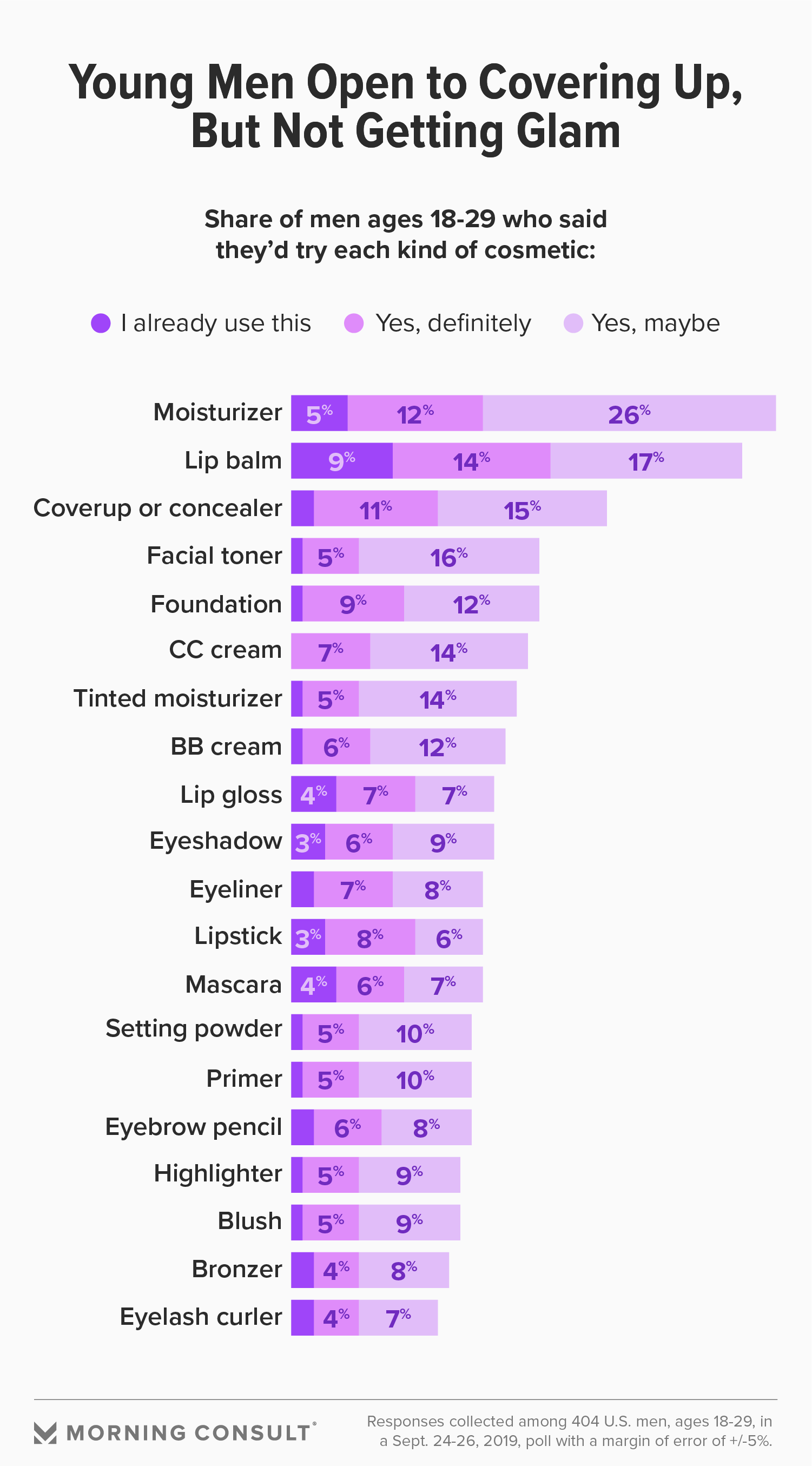 Male consumers like this more subdued approach, according to the poll: Coverup, concealer and tinted moisturizer ranked high in a list of products men would try, while feminine staples such as blush and mascara ranked lower.

For example, British male cosmetics line War Paint used a promotional clip in May that featured a toned and tattooed man putting on a skull ring after applying the brand’s eponymous makeup. (The video faced criticism for promoting “toxic masculinity” and has since been taken down.)

Sales in the men’s personal care market are projected to see steady growth, reaching $4.5 billion this year in the United States, according to a September report from market research firm Mintel Group Ltd. The report said sales are primarily driven by products such as shampoos and deodorants but predicted that brands would benefit from a “new prioritization presenting a healthy appearance.” Globally, the industry is set to reach $166 billion by 2022, per an October 2016 Allied Market Research study, with a compound annual growth rate of 5.4 percent between 2016 and 2022.

Educating men about products and getting guys to experiment will be key to growth of the makeup category, Grella and Kahan both said, and re-familiarizing men with products that they know of but never thought were suited for them.

“Women grew up with makeup — it’s a multibillion-dollar industry,” Grella said. “Whereas men, they haven’t grown up with it. They haven’t had it on the counter. Their fathers never used it. They don’t have it in the bathroom.” Changing that might take a few generations, he said.