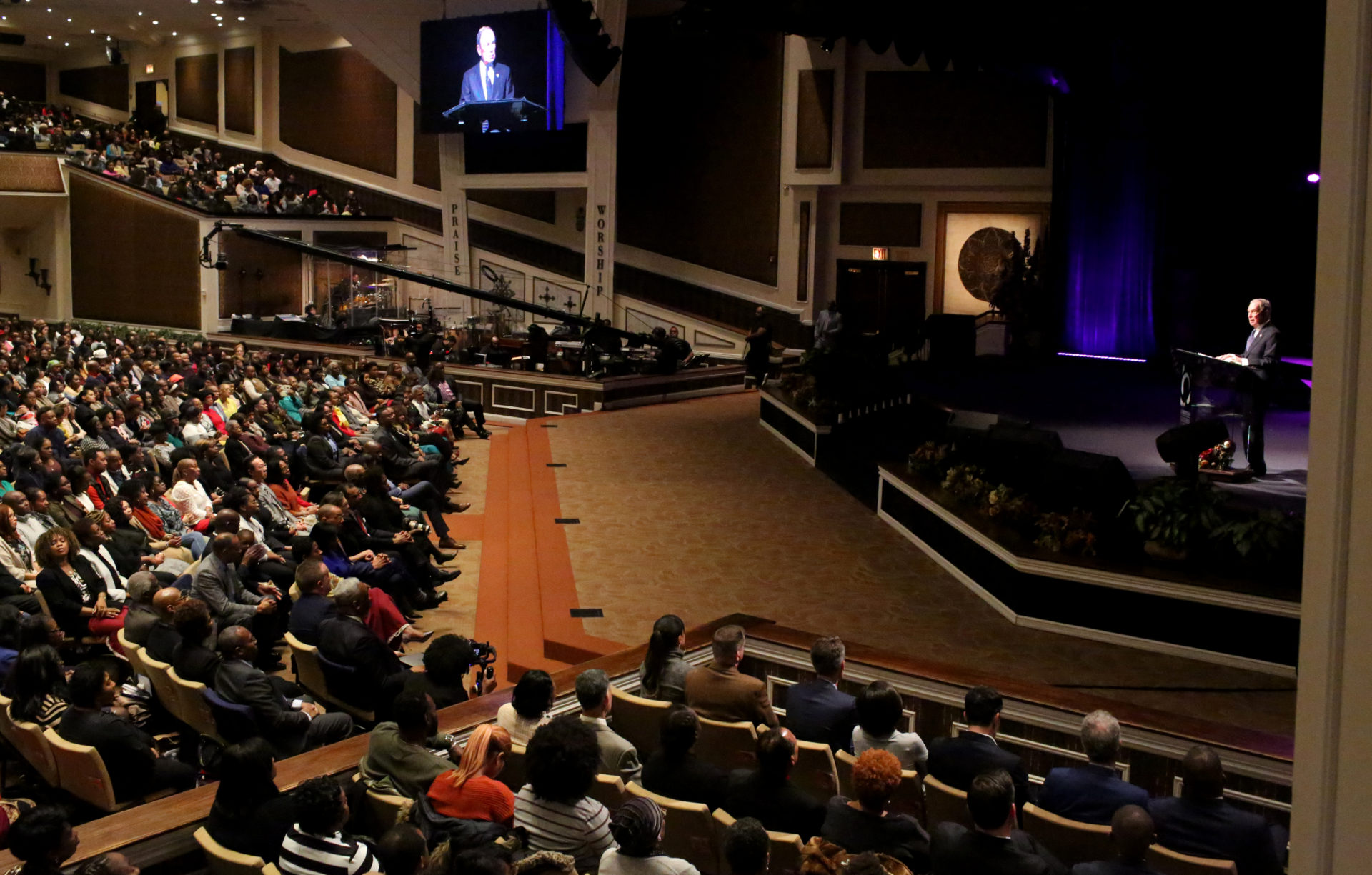 Michael Bloomberg speaks Nov. 17 at the Christian Cultural Center in Brooklyn. The former New York City mayor, who entered the Democratic presidential race on Sunday, begins his campaign with a higher unfavorability rating among black voters than any other candidate, Morning Consult polling shows. (Yana Paskova/Getty Images)
By Jessica Seibold

Billionaire Michael Bloomberg on Sunday launched his campaign for the Democratic presidential nomination, one week after publicly apologizing for overseeing “stop and frisk” during his tenure as mayor of New York City.

“I want you to know that I realize — back then, I was wrong, and I’m sorry,” Bloomberg told a predominantly black audience at the Christian Cultural Center in Brooklyn on Nov. 17, the first time he has distanced himself from the policing policy that angered many black Americans, one of the Democratic electorate’s most important voting blocs.

The apology isn’t having an immediately measurable impact on black voters, according to Morning Consult polling. Thirty percent of black Democratic primary voters said they had a favorable view of Bloomberg in surveys conducted Nov. 18-24, compared with 23 percent who had an unfavorable view — figures that are statistically unchanged from responses collected Nov. 11-17. The surveys respectively sampled 786 and 1,430 registered black voters who indicated they may vote in a Democratic primary or caucus in their state. The Nov. 18-24 sample has a margin of error of 4 percentage points, and the Nov. 11-17 sample has a 3-point margin of error. 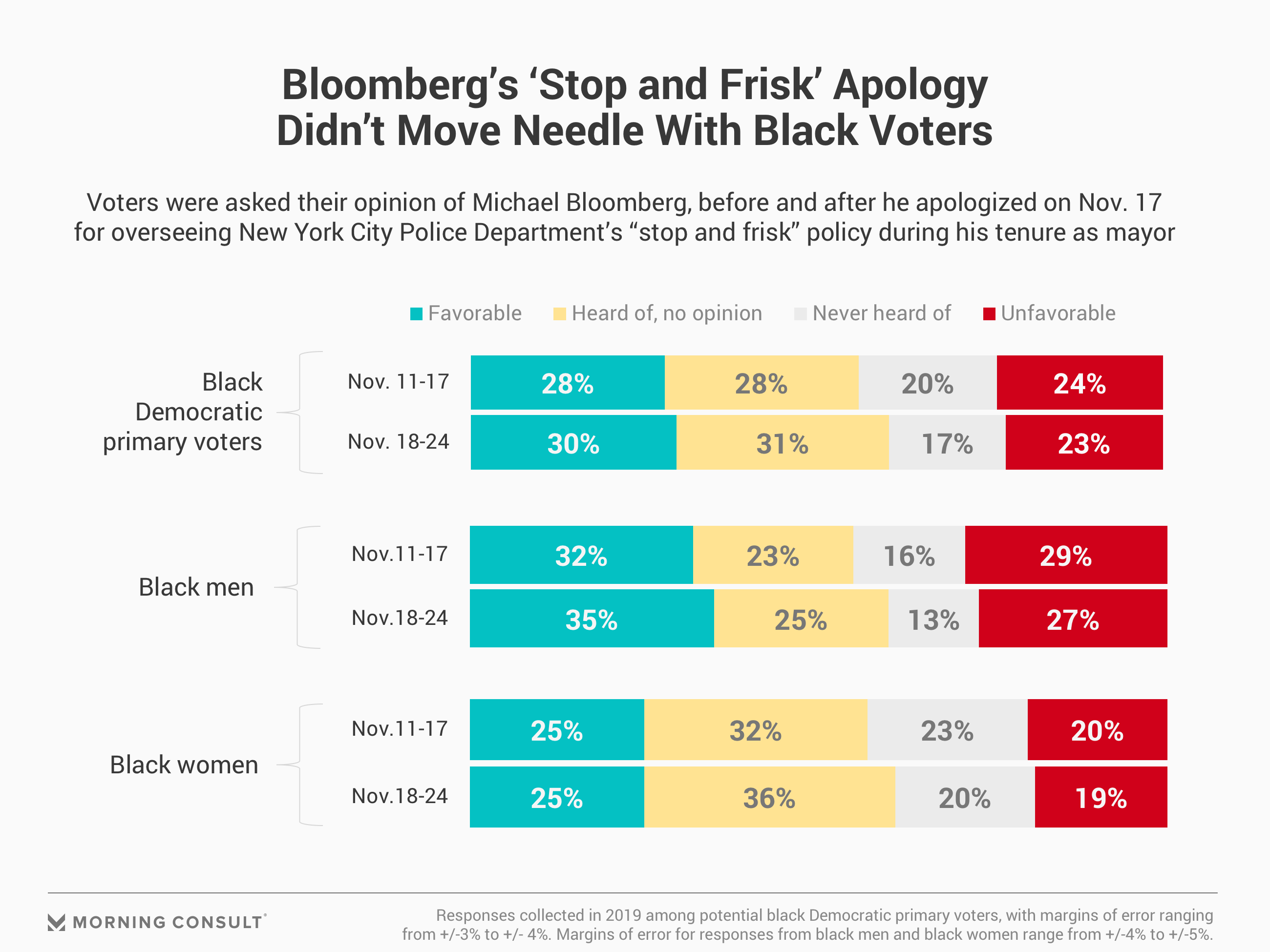 “I don’t think the apology moves the needle with anyone, and it raises more questions than it answers,” Jarrod Loadholt, a South Carolina-born Democratic strategist who lives in Georgia, said in a Nov. 18 email.

That’s a potential problem for Bloomberg, who in his bid for the nomination is looking past early primary states with small populations of people of color, and is instead hoping to compete in states with larger African-American representation. The former mayor’s unfavorability rating among black voters is the highest of any candidate in Morning Consult polling, and at 7 points, his net favorability — the share of voters with a favorable opinion minus those with an unfavorable opinion — is third from last among those voters, just above Montana Gov. Steve Bullock and Rep. Tulsi Gabbard of Hawaii, who are more than twice as likely to be unheard of among those respondents.

Along with lingering resentment over his support for stop and frisk, Bloomberg could also struggle to develop ties with local black leaders that are necessary to gain favor with the voting bloc, said Bakari Sellers, a former state lawmaker in South Carolina.

“Bloomberg doesn’t have sustained relationships with the American community throughout the South,” said Sellers, who serves as a campaign surrogate to Sen. Kamala Harris of California. “Coming down with a new nonprofit or charity is fine, but never having seen him at an HBCU, or visit a black church or do anything of any great importance for civil rights — Southern people aren’t going to trust Michael Bloomberg simply because they don’t know him.”

Related: Bloomberg Is Top Choice for 4% of Democratic Primary Voters

However, there have been some positive developments on that front.

Last week, in a text exchange with Free Times and The Post and Courier, Columbia Mayor Steve Benjamin became the first high-profile South Carolina Democrat to announce his support for Bloomberg. Given that 48 percent of black Democratic primary voters have yet to form an opinion on Bloomberg, endorsements of that kind could bolster his image.

“That’s the kind of validator he will need ten times over to make up ground with black voters as well,” Loadholt stated.

Bloomberg’s campaign did not respond to a request for comment.