As Trump Mulls Guidance on Vaping, Flavor Ban Could Cost Him 11% of His Voters 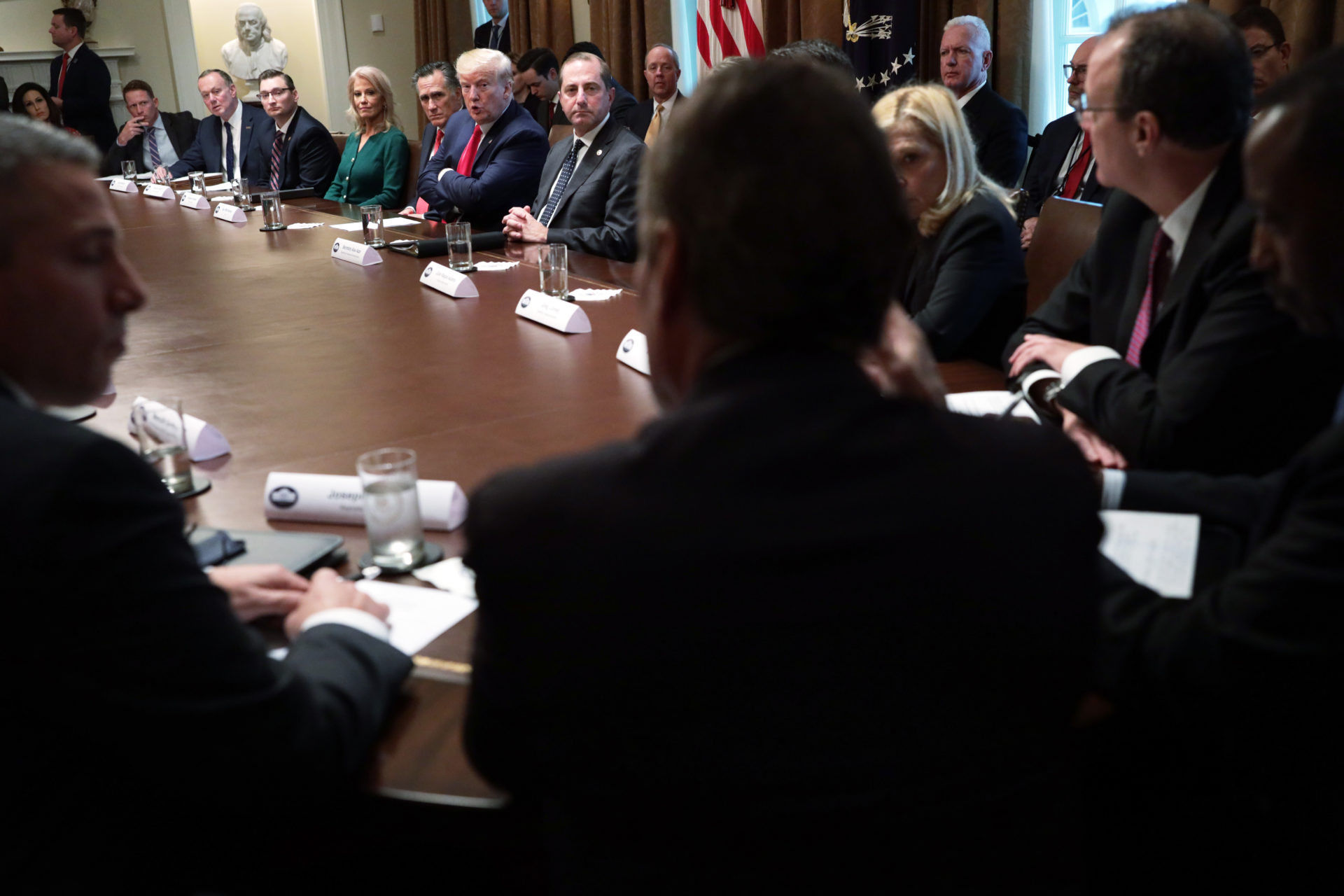 White House senior counselor Kellyanne Conway, Sen. Mitt Romney (R-Utah), President Donald Trump and Secretary of Health and Human Services Alex Azar participate in a listening session on youth vaping of electronic cigarette on Nov. 22, 2019 in the Cabinet Room of the White House in Washington, D.C. In a Nov. 22-24 survey of 1,988 voters, roughly 1 in 10 Trump 2016 voters said a 2020 presidential candidate backing a ban on flavored e-cigarettes would be less likely to win their vote, with 8 percent saying they would be “much less likely” to vote in favor of that candidate. (Alex Wong/Getty Images)
By Yusra Murad

During a vibrant listening session at the White House last week between public health leaders and vaping advocates, with both sides hoping to sway President Donald Trump as he crafts new policy on electronic cigarettes, the president became critical of his own previous pledge to ban flavored products, questioning whether it could provide fertile ground for a black market to emerge in the absence of a robust vaping industry.

The Trump administration’s urgency in addressing youth vaping has steadily declined over the past two months, as Trump’s advisers have reportedly sowed fear that a ban could wreak havoc on his re-election effort in 2020. And according to new Morning Consult/Politico data, the administration may have cause for concern.

In a Nov. 22-24 survey of 1,988 voters, roughly 1 in 10 Trump 2016 voters said a 2020 presidential candidate backing a ban on flavored e-cigarettes would be less likely to win their vote, with 8 percent saying they would be “much less likely” to vote in favor of that candidate. The sample of 677 Trump voters has a margin of error of 4 percentage points.

For a president in a precarious position, that data underscores the challenge facing the Trump administration as it charts a path forward on e-cigarettes: how to simultaneously respond to the pressing public health concern of underage nicotine use, while securing a vaping constituency that could prove instrumental in Trump’s path to victory in 2020.

During Trump’s Nov. 22 meeting, conservative groups and vaping industry leaders raised concerns about the swath of Americans that will be affected by the administration’s policy — e-cigarette users, their friends and family and those employed in the vaping sector. Tim Chapman, executive director at Heritage Action for America, said Trump taking a gamble on 1 in 10 of his voters “could change an election.”

Chapman, who attended Friday’s meeting at the White House, said Trump asked “tough questions” both of vaping proponents and public health officials to decipher the fault lines on both sides of the issue, seeking an opening for compromise.

“This election is going to be razor thin. You can’t afford to be losing 10 percent anywhere,” Chapman said. “Really, you need to be adding 10 percent.”

Conservative groups, such as Heritage and Americans for Tax Reform, have been vocal about a flavored vaping ban’s political consequences for Trump — who won in 2016 in no small part due to voters crossing the aisle in states like Wisconsin, Michigan and Pennsylvania. As it happens, those are the very same states with smoking rates exceeding the national average.

Paul Blair, director of strategic initiatives for Americans for Tax Reform, said Trump’s position on vaping could cement his “margin of victory or loss in 10 or so states.”

“The political evidence is mounting that being wrong on this issue would be a disaster for the president’s re-election prospects,” Blair said. “The reason that this is a political story is because of the health and benefit to consumers that use these who are adults.”

Related: Most Trump Voters Back His Proposed Ban on Flavored E-Cigarettes

Among all voters, 55 percent support a ban on flavored e-cigarettes, with a majority of Republicans (53 percent) also backing the measure. The poll has a margin of error of 2 percentage points.

But according to Blair, public opinion fails to convey the nuances of an issue like this, where many people are likely underestimating the vigor of the vaping constituency. It’s a matter of preference versus intensity, Blair said — even if a person supports a flavored e-cigarette ban, he or she probably won’t vote on that issue. The opposite may be true for ardent vaping proponents, though it’s difficult to assess whether e-cigarette users are single-issue voters.

Both Blair and Chapman expressed some degree of optimism about the meeting, which they said appeared to be the first time Trump raised questions about the efficacy of prohibition and the potential for counterfeit products to flood the market. According to Blair, the landscape has changed since September, when Trump “may have deferred” to Health and Human Services Secretary Alex Azar on “some of these questions in a way in which I don’t think is necessarily happening anymore.”

Meanwhile, public health leaders remain united behind a ban, citing the skyrocketing popularity of vaping and a rise in nicotine dependency among children.

“Good policy makes for good politics — that’s as true for e-cigarettes as it is for so many other public health priorities,” said Mark Schoeberl, executive vice president for advocacy at the American Heart Association. “With 97 percent of youth e-cigarette users preferring flavored products, removing flavored e-cigarettes from the market and keeping them out of the hands of our kids is a necessary step that voters strongly support.”

While Trump has so far backed away from a ban, he said his administration plans to raise the tobacco purchasing age to 21, an initiative supported by vaping industry advocates and anti-tobacco groups alike.

Such an approach, Blair said, indicates the White House is seeking solutions that address youth access in a way that respects both the policy concerns of HHS and the political outcomes at stake — though health experts maintain raising the age alone is insufficient.

“Even if the government doesn’t want to acknowledge e-cigarettes are a less harmful alternative to cigarettes, the people that use them believe that,” Blair said. “That’s what dictates political decisions. They don’t need the government’s blessing for their decision.”