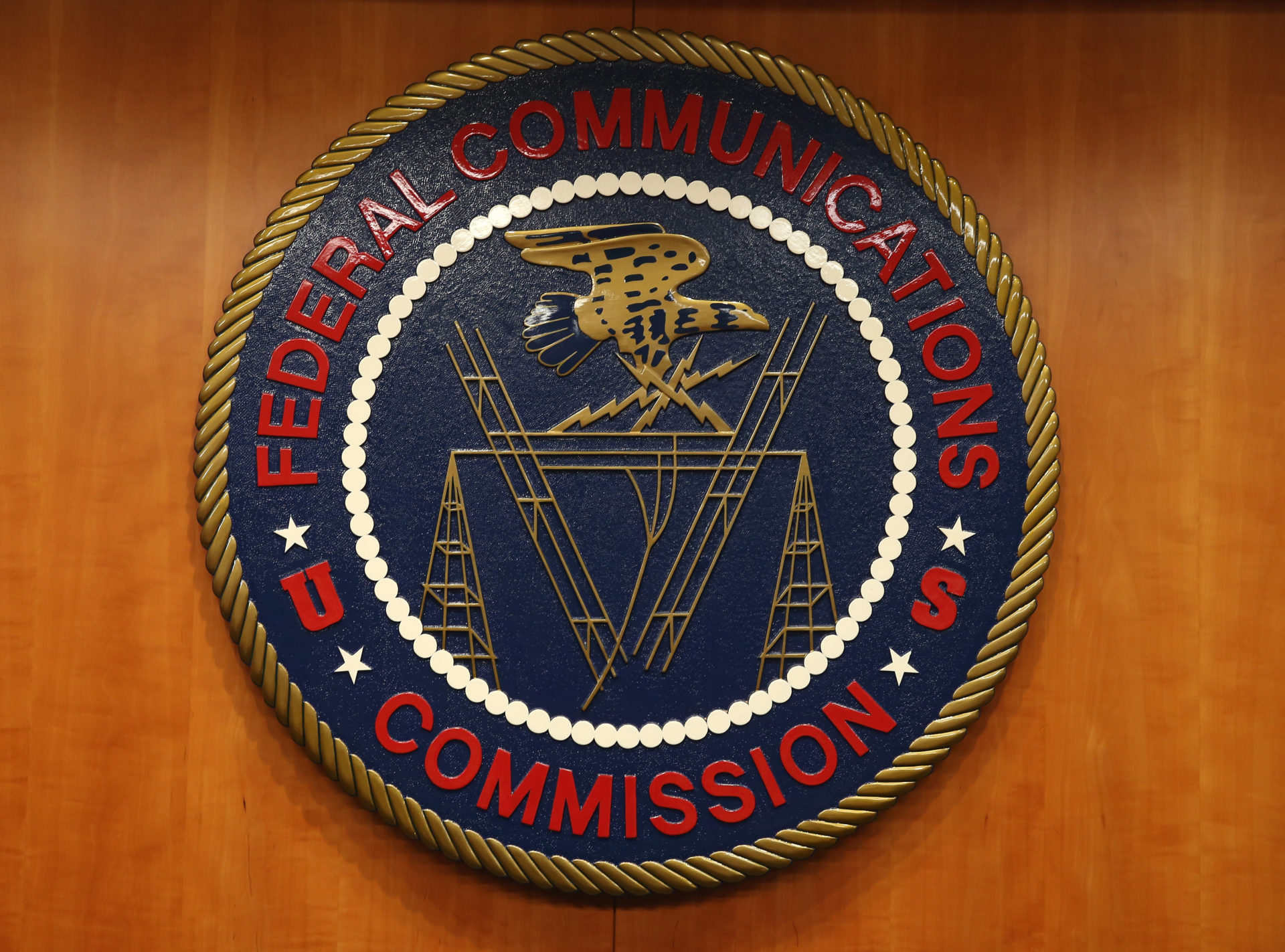 The seal of the Federal Communications Commission hangs inside the hearing room at the FCC headquarters Feb. 26, 2015, in Washington, DC. Consumer advocates believe it is now up to the FCC and the courts to provide the definitions missing from the Pallone-Thune TRACED Act. (Photo by Mark Wilson/Getty Images)
By Sam Sabin

A compromise bill targeting unwanted robocalls passed the House on Wednesday and, following an expected Senate vote either this week or next, could land on President Donald Trump’s desk before the end of the year. But consumer advocates worry that the decision to leave out some elements of the House’s original bill — such as definitions for which call operators and recipients are covered by the measure and mechanisms to close loopholes in the current laws — could limit the law’s effectiveness since it’s unclear who is impacted.

Both Consumer Reports and the National Consumer Law Center supported key provisions to resolve those issues in the House’s “Stopping Bad Robocalls Act,” (H.R. 3375) which was introduced by Energy and Commerce Chairman Frank Pallone Jr. (D-N.J.) and passed the full chamber in a 429-3 vote in July. The bill mandated that the Federal Communications Commission clearly define what constitutes an automatic telephone dialing system within six months of the legislation’s enactment and defined “called party” as the current user of a telephone number at the time a call is made.

However, both of those provisions, which consumer advocates had lobbied for in public testimony and letters to Congress, were missing from the bill language in the compromise legislation unveiled last week after months of negotiations with Senate lawmakers, who had overwhelmingly passed Sen. John Thune’s (R-S.D.) TRACED Act (S.151) in May. And consumer advocates say that while the recently unveiled Pallone-Thune TRACED Act is a step in the right direction, it doesn’t fill in the gaps in existing law that make enforcement difficult.

Maureen Mahoney, a policy analyst at Consumer Reports, said in a statement following the House vote Wednesday that the bill is a “major victory in the long fight to curb abusive robocalls” and that the group is “very glad Congress is taking these steps,” but added that Consumer Reports plans to “keep working for more protections above and beyond” this legislation to further crackdown on robocalls.

In a statement Monday to Morning Consult, Mahoney said the group had been pushing to make “the coverage in existing law, for what constitutes a robocall and what constitutes the required consumer consent, as airtight as possible.”

“Some robocallers have claimed that their calls aren’t technically covered, or that some past interaction amounts to ongoing consent to be robocalled,” Mahoney said. The original “House-passed bill would have addressed those gaps.”

Now advocates are turning to the courts and the FCC as the most likely candidates for that clarification, despite their past disagreements on the issue.

In 2018, the FCC collected public comments on the interpretation of the Telephone Consumer Protection Act, with a specific focus on the definition of an automatic telephone dialing system, following two conflicting rulings: one from the D.C. Circuit Court, which overruled the FCC’s 2015 decision to define the systems as any device that had the capacity to randomly and sequentially generate numbers to dial or dial from a list, and one from the 9th Circuit Court, which had a broader definition. However, the FCC has yet to make a definitive rule based on those comments.

An FCC spokesperson said Tuesday the agency plans to “review the public comments before making a decision” but declined to comment further. An aide in Thune’s office said that given the complexity of the issue, the FCC is the best place to address this issue, not Congress. And the House Energy and Commerce Committee declined to comment.

The compromise bill comes at a time when robocalls in the United States are growing, according to YouMail, which estimates that 54 billion robocalls have been placed nationwide in 2019 so far — outpacing 2018’s 47.8 billion. And nearly half of the 5 billion calls in November were classified as scams. 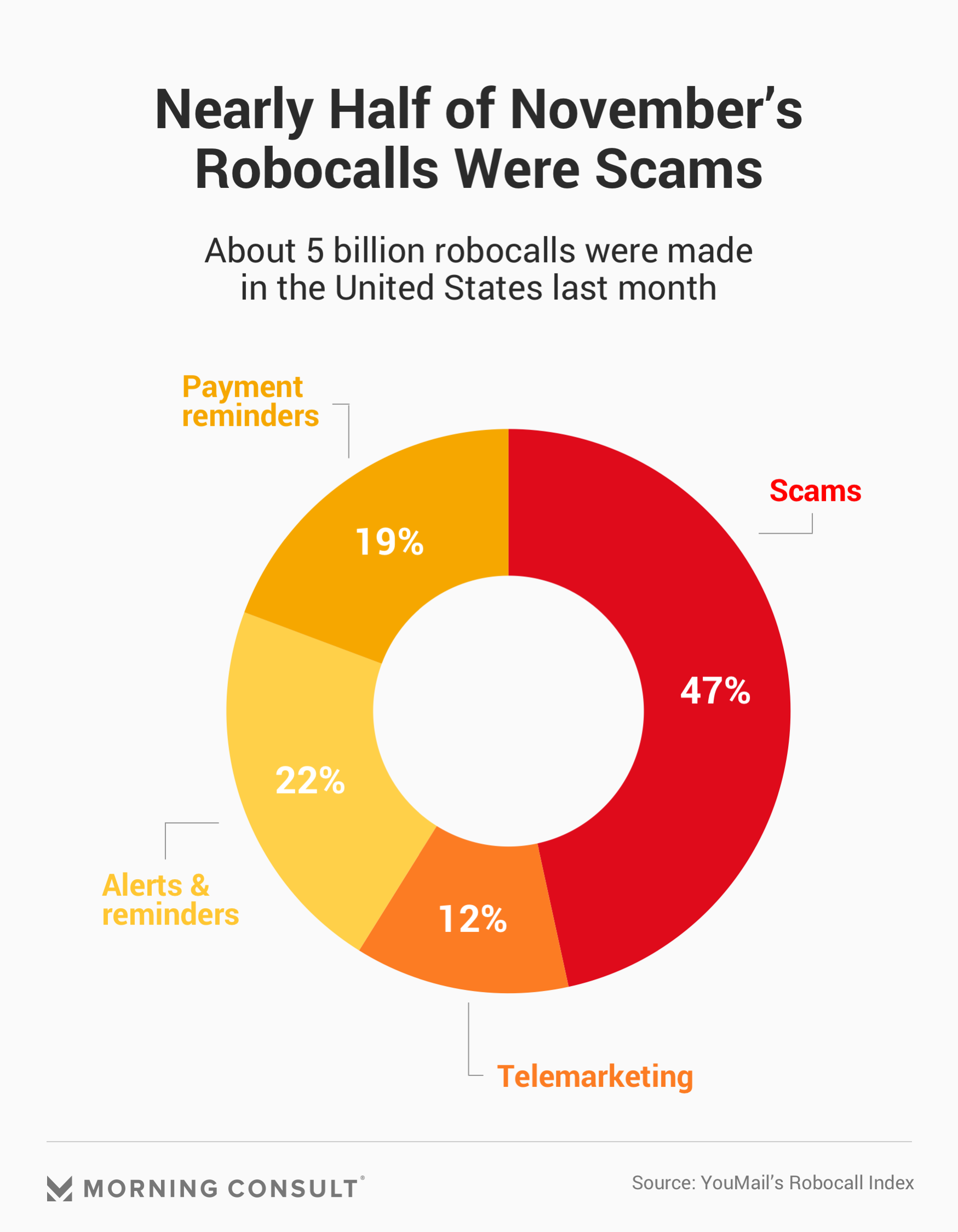 The Pallone-Thune TRACED Act would require phone companies, including mobile carriers, to provide call authentication tools, known as SHAKEN/STIR, that would warn consumers when they’re receiving a possible robocall and also require the FCC to allow carriers to use “robocall blocking” tools for such unauthenticated calls. And for both services, carriers couldn’t add an extra line item to consumers’ bills.

However, many of these proposed tools are already supported by the FCC. In June, the commission adopted a policy giving mobile carriers permission to block suspected illegal and unwanted calls by default. And Republican Chairman Ajit Pai has said the agency will consider “regulatory intervention” if phone companies don’t voluntarily implement the SHAKEN/STIR technology by the end of the year.

Michele Shuster, a partner at Mac Murray & Shuster LLP, an Ohio-based law firm that works with businesses to comply with consumer protection laws, said both consumer advocates and industry groups were looking to Congress to put an end to a yearslong legal fight regarding the definition of automatic telephone dialing systems, which has been a subject of contention since its introduction in the 1991 Telephone Consumer Protection Act.

“I think everybody — the consumer advocates, the industry groups — thought that the bill would address this issue or mandate that the FCC provide clarification on the definition of ATDS, and it just didn’t,” she said.

Shuster, who was previously the chief of the Ohio Attorney General’s Consumer Protection Section, said not knowing what exactly constitutes an automatic operator can be detrimental to businesses, which risk a civil penalty of up to $1,500 per call for willful violations.

“If a company is making thousands of calls a day, that number becomes too large for most calculators to display,” she said. “It’s a really important distinction of what is or isn’t an ATDS.”

The National Consumer Law Center also pushed for a clear ATDS definition, with senior counsel Margot Saunders telling the House Energy and Commerce Committee’s communications subcommittee in April that it should be defined both as systems that store numbers and dials them automatically and as systems that generate numbers and dial them automatically.

Saunders also voiced support for language that only exempted calling equipment that “the caller demonstrates requires substantial human intervention” to place a call or dial, which would close a loophole where call operators hired a human “clicker agent” to just repeatedly click a single computer button to dial calls in order to bypass robocall laws.

“We were pushing Congress to articulate the closure of those loopholes in the bill,” Saunders said in an interview Monday. “But as we know, Congress is a political body and it didn’t get done.”

Saunders noted that while the final compromise bill “doesn’t do as much as we originally requested,” it still “somewhat addressed” the key provisions requested by consumer groups.

“All in all, we stand by our statement that the bill represents an advance forward to combat robocalls,” she said.

This story has been updated to reflect the House’s passage of the robocalls bill.