The parties signed the 12-year, $1 billion agreement in March 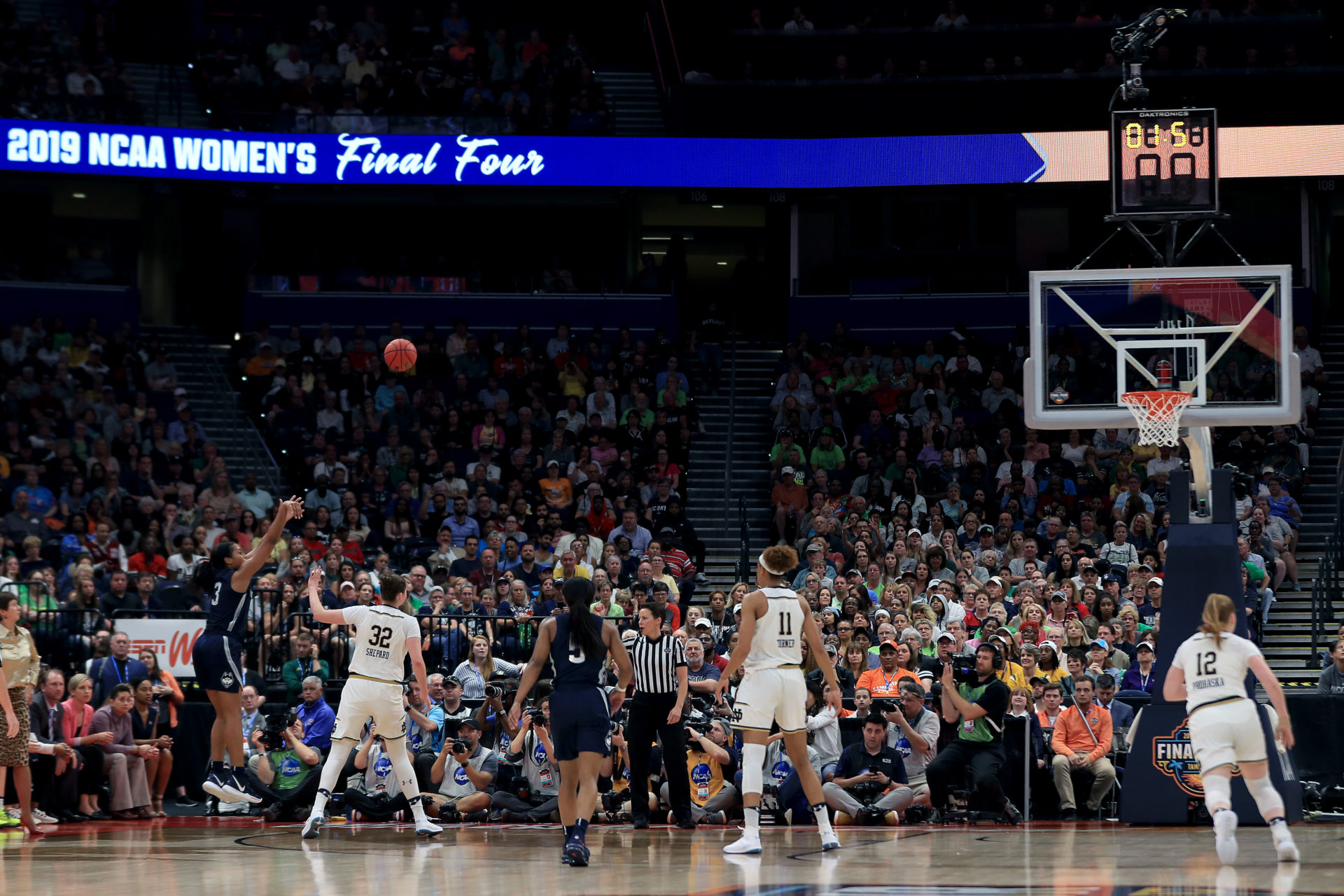 Megan Walker of the UConn Huskies attempts a shot against the Notre Dame Fighting Irish during the women's Final Four in Tampa in April. ESPN views the Huskies as a blue-chip asset, and is said to have previously negotiated with the AAC on an increase in the number of games it could carry in 2020. (Mike Ehrmann/Getty Images)
By Alex Silverman

ESPN and the American Athletic Conference are in the process of renegotiating the terms of their recently minted 12-year, $1 billion media rights deal to account for the University of Connecticut’s impending departure for the Big East Conference.

Nick Dawson, vice president of programming and acquisitions at ESPN, said the network is working with AAC Commissioner Mike Aresco and his team to address UConn’s looming exit via a process outlined in the contract the parties announced in March. He noted this is standard practice for ESPN in its agreements in the event of a membership change.

“Obviously for us, we did the deal with UConn as part of the conference. That was our preference — that UConn would be there,” Dawson said Thursday at the Learfield IMG College Intercollegiate Athletics Forum presented by Sports Business Journal. “The school made their decision, which we respect and, much like any time this happens in terms of membership change, there’s a process that’s outlined in the agreement that we’re working through.”

Sports Business Journal in June reported the presence of a “composition clause” in the AAC-ESPN deal, but it was unclear at the time whether ESPN would exercise its right to renegotiate the deal if UConn decided to leave. The AAC and UConn announced in July that they had agreed on terms to allow the school to exit the conference on July 1, 2020, which reportedly included a $17 million exit fee.

The renegotiation is likely to hinge on the perceived value of the UConn brand relative to the rest of the geographically disparate conference. Aresco downplayed UConn’s significance to the deal, pointing out its lack of success in football, the most-viewed college sport in the country.

“We’re still very powerful,” Aresco said at the forum. “UConn was a struggling football brand, so if anything our football might even be a bit stronger.”

He added, “We’re not worried at all about the value we’re providing to ESPN, even with 11 schools.”

ESPN, however, considered UConn basketball — particularly the historically dominant women’s program — a blue-chip asset. In fact, a person with knowledge of the talks said ESPN had actually negotiated to increase the number of UConn women’s games it could air in 2020 prior to news of the school’s departure. The network’s history as a rights holder for UConn dates back to the school’s previous stint in the Big East.

Aresco said the AAC isn’t in a rush to replace UConn and that the league will proceed with 11 teams for the foreseeable future, noting there are “only a handful of schools that would enhance the brand.” He pointed to football strength as the most important quality in eventually selecting a 12th school.

The conference has worked hard in recent years to elevate its reputation relative to the Power Five collegiate conferences — the ACC, Big Ten, Big 12, Pac-12 and SEC. Aresco on Thursday compared the AAC’s place in the college sports landscape to that of JetBlue Airways Corp. in the airline industry.

“We think of ourselves not only as a major carrier — or major conference — but we do it differently,” he said. “We don’t have flagship state institutions like the ‘P5.’ We call ourselves ‘P6.’ We’ve been very serious about that campaign.”

Correction: A previous version of this story misstated the terms under which ESPN has previously carried UConn’s women’s basketball games.