Even as CDC Says Risk of Coronavirus Is Low in U.S., Worry Begins to Spread

74% are at least as concerned about an outbreak of this virus as they were Ebola’s spread in U.S. in 2014

A woman arriving on an international flight to Los Angeles International Airport wears a mask on the first day of coronavirus screenings for travelers from Wuhan, China on Jan. 18, 2020. (David McNew/Getty Images)
By Yusra Murad

Within three weeks of Chinese health officials announcing the identification of a new strain of coronavirus, the outbreak has reached over a dozen countries outside of mainland China, with over 4,500 confirmed cases of the respiratory virus and a death toll exceeding 100 — and Americans are on edge.

According to a new Morning Consult poll of 2,200 U.S. adults — surveyed from Jan. 24-26, as three more cases of coronavirus were confirmed stateside — the vast majority are worried about an outbreak of the virus in the United States, with roughly 3 in 4 people either as concerned about coronavirus as they were about the 2014 outbreak of Ebola, or more concerned. 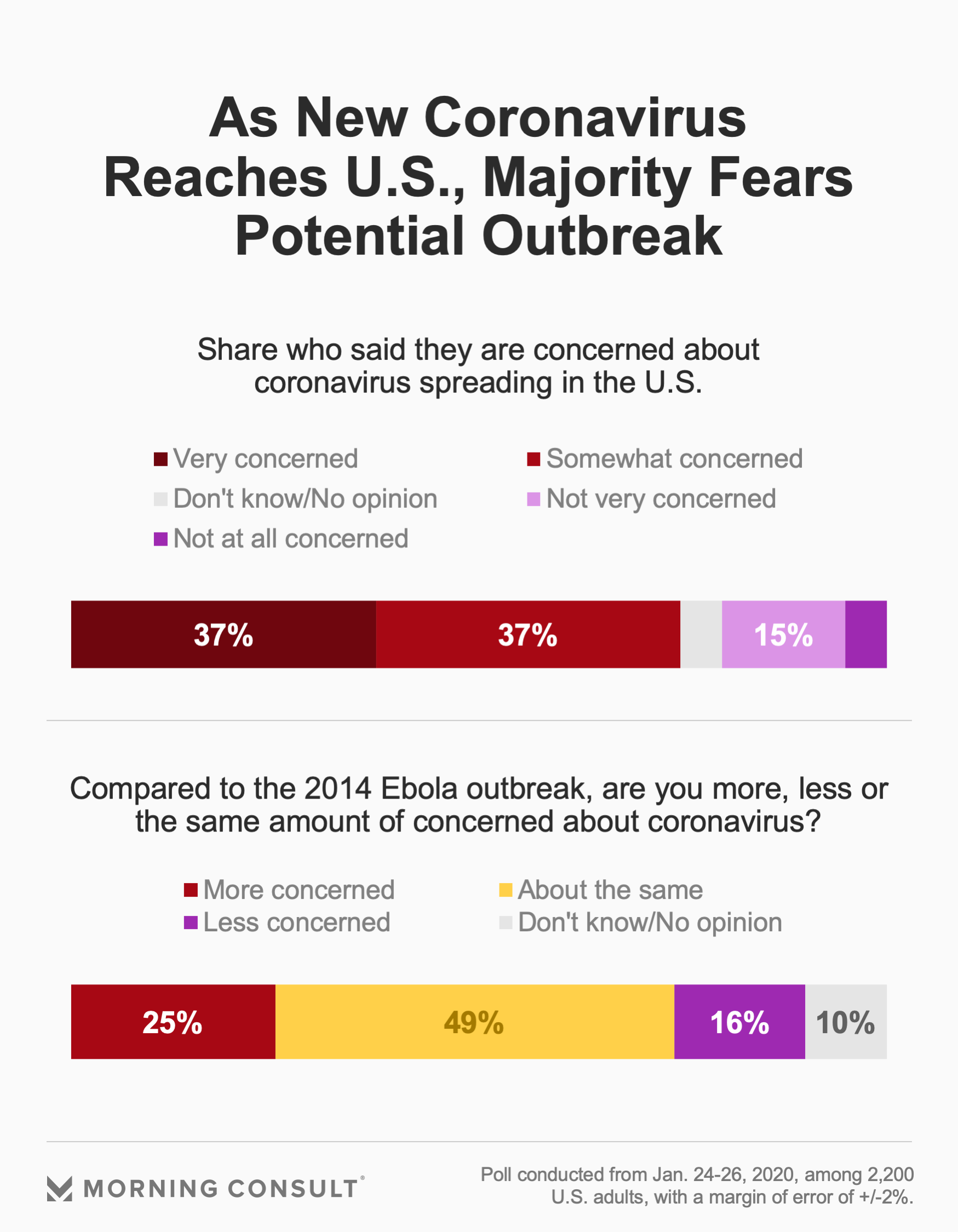 The new virus, named “2019-nCoV,” originated in the port city of Wuhan, China, and is from the same family of viruses as SARS, the viral respiratory illness that killed 774 people between 2002 and 2003. Though the World Health Organization has refrained from declaring a global health emergency yet, the number of cases worldwide is quickly accelerating and several Chinese cities are on full or partial lockdown, restricting travel for almost 60 million people during the Lunar New Year holiday.

Of the potential cases of the coronavirus reported to the Centers for Disease Control and Prevention as of Jan. 27, the agency has confirmed five with another 73 people still under investigation, dubbing the outbreak a “rapidly evolving situation.”

The sudden emergence and escalation of the coronavirus have left the public particularly anxious about this outbreak: 47 percent of respondents think it is at least somewhat likely that someone in their state will become infected, despite the CDC’s observation that the virus is not yet spreading in the United States, rendering the immediate health risk low.

As the level of panic grows, the public places their trust in the CDC — and no one else. The majority of U.S. adults have little to no confidence in President Donald Trump to control the spread of the virus and have slightly more confidence in airline companies than in Congress. 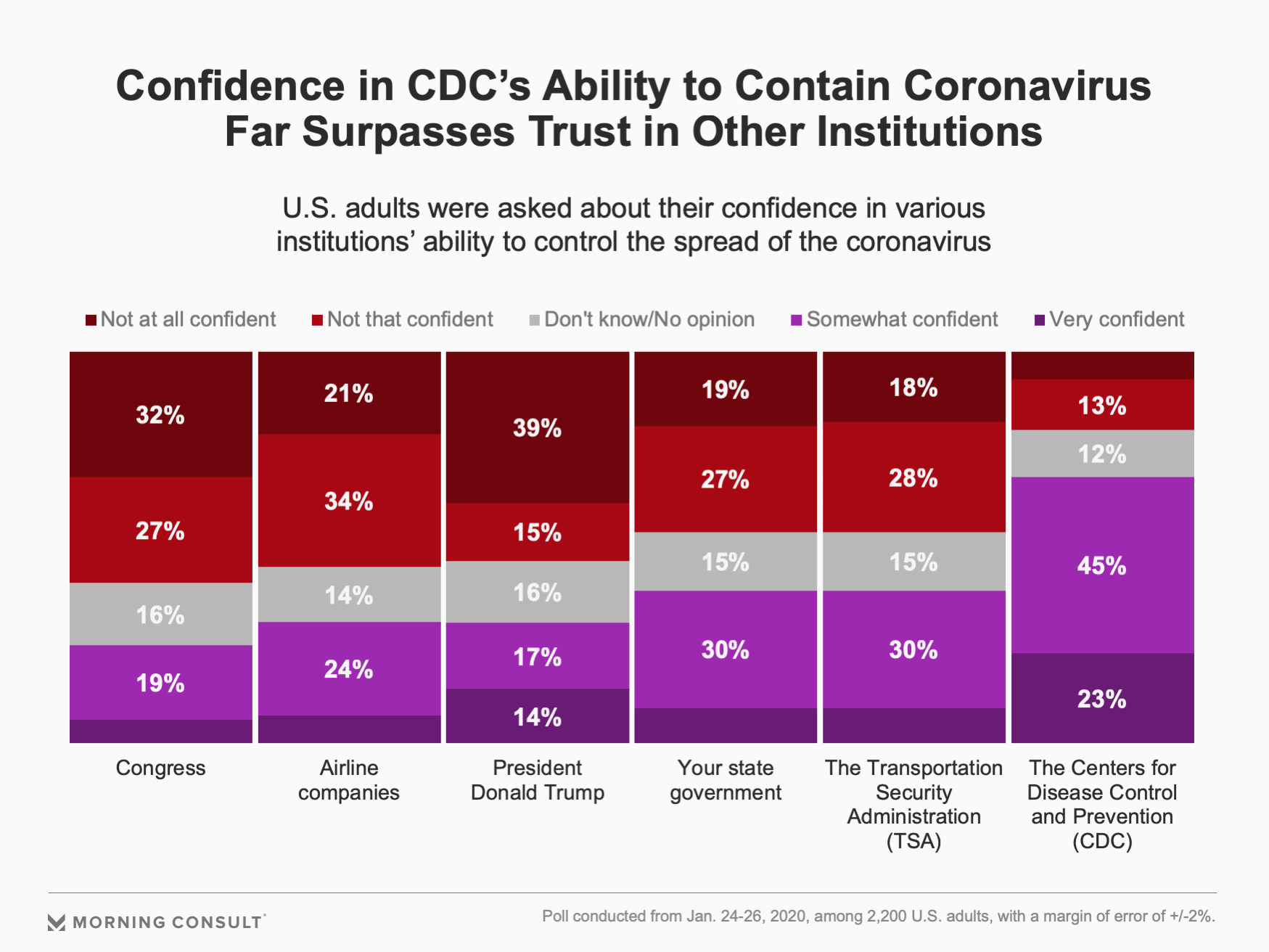 The perception of the danger posed by coronavirus compared to influenza, for example, also suggests the public calculates threat based not just on the likelihood of contracting an illness, but its relative novelty. Though 8,200 people in the United States, including 54 children, have died already during this flu season, with an estimated 15 million cases of the illness, people are still less worried about the flu (62 percent) than the spread of coronavirus.

And now that it has reached the United States, the public is widely supportive of a range of measures to curtail the domestic spread of the virus, including a travel ban to and from affected countries, quotas on how many travelers can enter the United States from those countries and enhanced airport screenings and quarantine protocols. Less than half, however, say they would get immunized if a vaccine became available.

Though the United States has not yet taken any such measures, the State Department on Monday raised the travel advisory for China to “Level 3,” warning Americans to reconsider travel. The alert for the Hubei Province remains at “Level 4: Do Not Travel.” The CDC also raised its travel warning Monday to its highest alert level, recommending people avoid all nonessential travel to China.

This story has been updated with new data from health officials.