After a Year of Heated Debate, ‘Medicare for All’ Holds On to Voters’ Majority Support

From January 2019 to January 2020, net support fell 11 points as opposition rose among all voting blocs 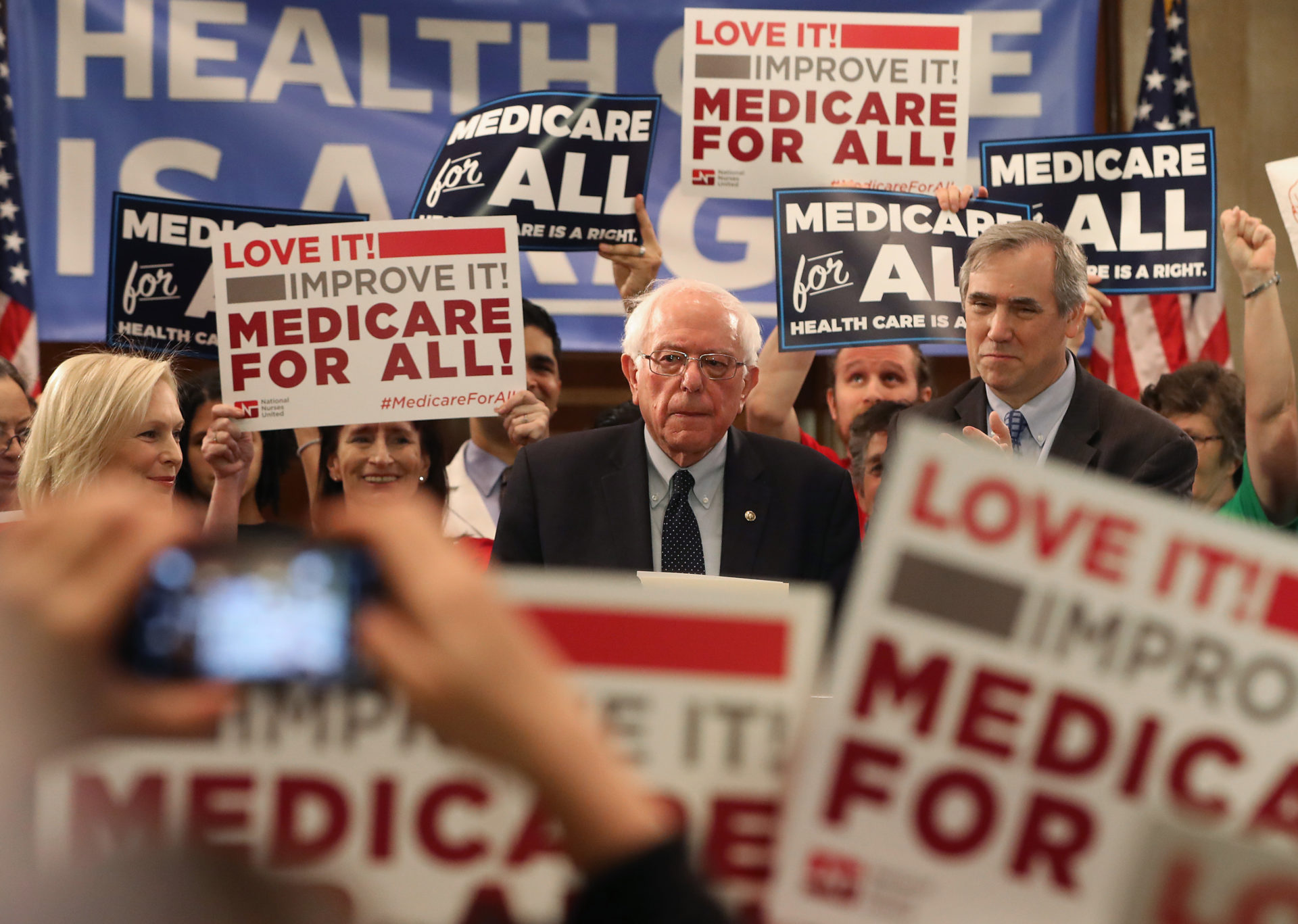 Sen. Bernie Sanders (I-Vt.) introduces the "Medicare for All Act of 2019" on April 9, 2019 in Washington, D.C. Among registered voters, net support for single-payer health care began 2019 at 27 percentage points and started 2020 at 16 points. (Mark Wilson/Getty Images)
By Yusra Murad

After a year that pulled the decades-long movement for a single-payer health care system to the forefront of the Democratic presidential primary, where its heightened visibility in the political mainstream left it vulnerable to attacks from opponents of all political persuasions, “Medicare for All” survived with a majority of voters’ support, albeit a bit damaged.

A Morning Consult analysis of monthly tracking of voter support for Medicare for All over the past year provides further insight into the demographic makeup of both advocates and opponents; the groups most vulnerable to the chorus of anti-single-payer advertising as it reached a fever pitch in 2019; and whether the moments in a particularly eventful primary season moved the needle for voters. 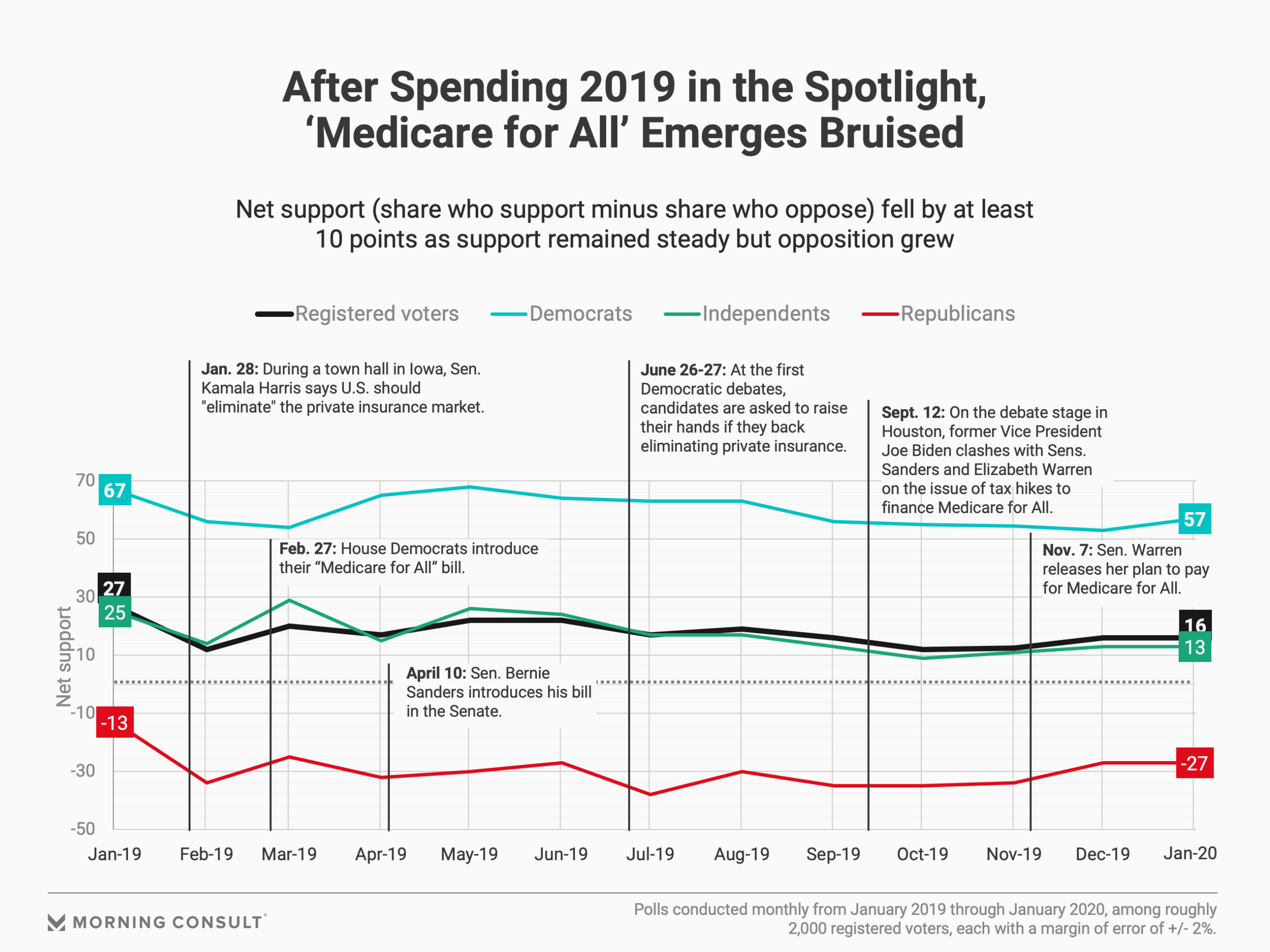 But as the opposition mobilized, fueled both by moderates within the Democratic Party reluctant to undermine the Affordable Care Act and the deep-pocketed titans of the health industry, the share opposed to Medicare for All rose from 29 percent in January 2019 to 36 percent at the start of the new year. As a result, among all voters, net support (the share of support minus the share of opposition) sank by 11 points. Among Democrats, it fell by 10 points.

Both critics and advocates of Medicare for All see a silver lining in the figures. While critics believe it bodes poorly for progressives that they failed to build on support despite having a wide platform, leaders of the movement for single-payer say the fact that a year of vocal, well-funded attacks didn’t pull the level of support below a majority speaks to its appeal to Americans.

Rep. Mark Pocan (D-Wis.), co-chair of the Congressional Progressive Caucus, said in an interview that having Medicare for All serve as a litmus test in the earliest days of the primary season marked a seismic shift for the decades-long movement, solidifying its position as a top issue for the mainstream Democratic party, where it remained for the duration of 2019.

In 2016, at the height of the Democratic primary, there was only one version of Medicare for All — the plan proposed by Sen. Bernie Sanders (I-Vt.) — to scrutinize. Three years later, Americans have not only gotten up close and personal with the Sanders bill, but they have caught a glimpse from leading presidential contenders of what alternative pathways to universal coverage could look like in a Democratic administration driven by pragmatism rather than a push radical change. 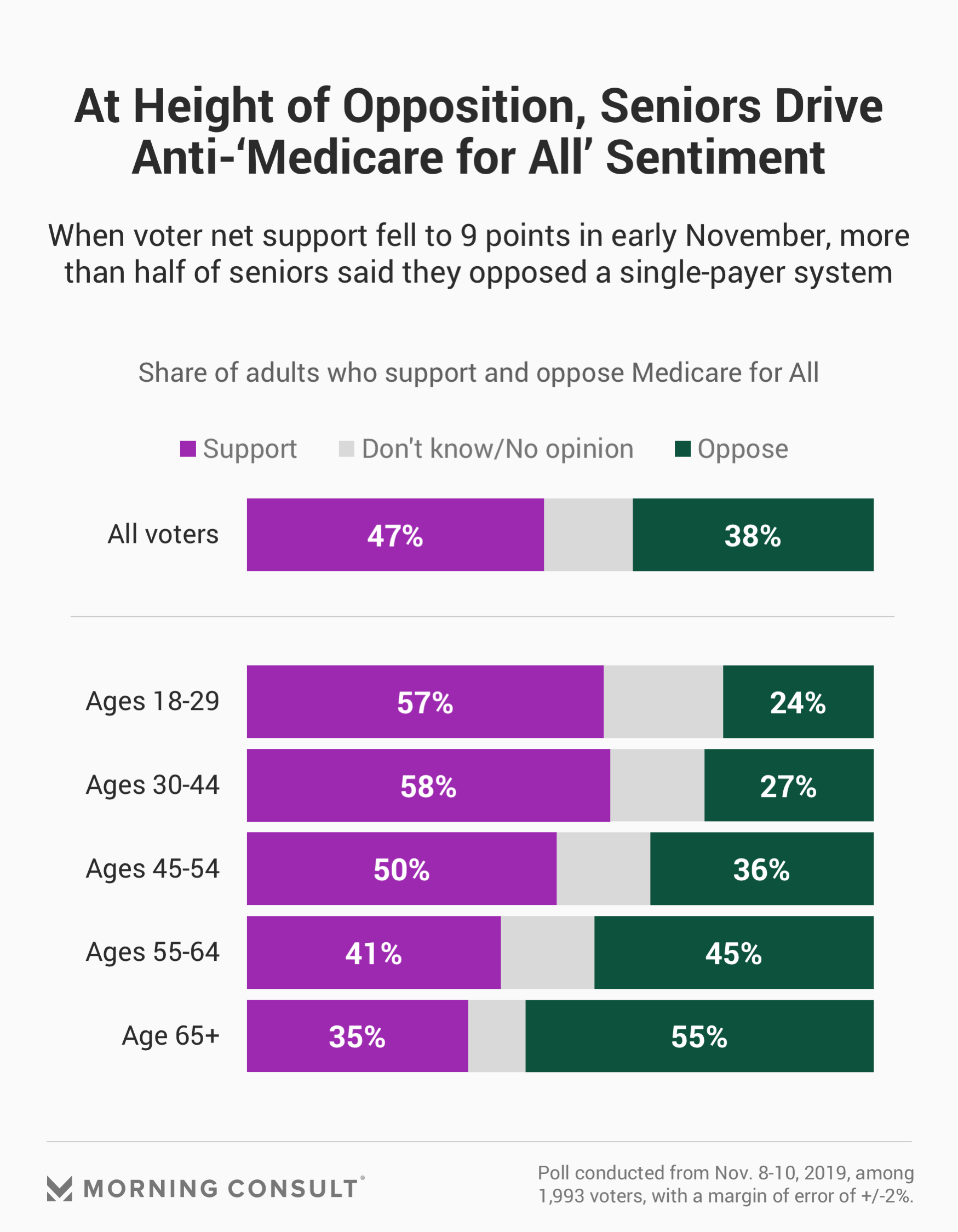 Throughout 2019, the policy faced highs and lows in the court of public opinion as the race for the Democratic presidential nomination heated up.

In January 2019, Sen. Kamala Harris (D-Calif.) drew ire near the beginning of her presidential campaign for suggesting the United States should “eliminate” the private market, a question that became a sticking point during several Democratic debates. In the spring, Rep. Pramila Jayapal (D-Wash.) and Sanders reintroduced single-payer legislation in Congress, leading to the first congressional hearings for Medicare for All.

And throughout the year, the Partnership for America’s Health Care Future, a coalition of health companies and advocacy groups that includes the hospital sector, the pharmaceutical industry and powerful lobbyists hit the gas on a multimillion-dollar campaign to eviscerate support for a plan that threatens many of those companies’ profits.

Snapshots of public opinion in the aftermath of several high-profile moments for Medicare for All showed movement: In a poll taken Nov. 8-10, three weeks after Sens. Sanders and Elizabeth Warren (D-Mass.) struggled to explain how they would fund Medicare for All at the October debate, net support among registered voters sank to 9, hitting its lowest point of the year. (The Warren and Sanders campaigns did not respond to requests for comment.)

On a panoramic glance of the year, these moments were blips on the radar. But public opinion did slowly trend downward, driven in no small part by one powerful voting bloc: senior citizens.

In January 2019, half of seniors said they supported Medicare for All. By early November, 55 percent of adults over 65 said they opposed the policy.

David Lipschultz, associate director at the Center for Medicare Advocacy, a nonprofit group focused on making improvements to Medicare, said industry groups who view Medicare for All as a threat to their profits have relied on “scare tactics” to build opposition in that demographic. That, coupled with critical comments about single-payer from health officials like Centers for Medicare and Medicaid Services Administrator Seema Verma, has been an effort to “generate fear” among Medicare beneficiaries, he said.

“When you have these powerful interests and the Medicare program telling you this is ‘bad, bad, bad,’ that’s going to have an impact on some folks,” Lipschultz said. “But that could be taken as a positive sign for supporters of Medicare for All, that they’re generating this kind of pushback — it means maybe they’re getting somewhere.”

In the first month of 2020, majority support among Democrats held, with nearly three in four party members saying they support a health care system providing all Americans insurance from the government. 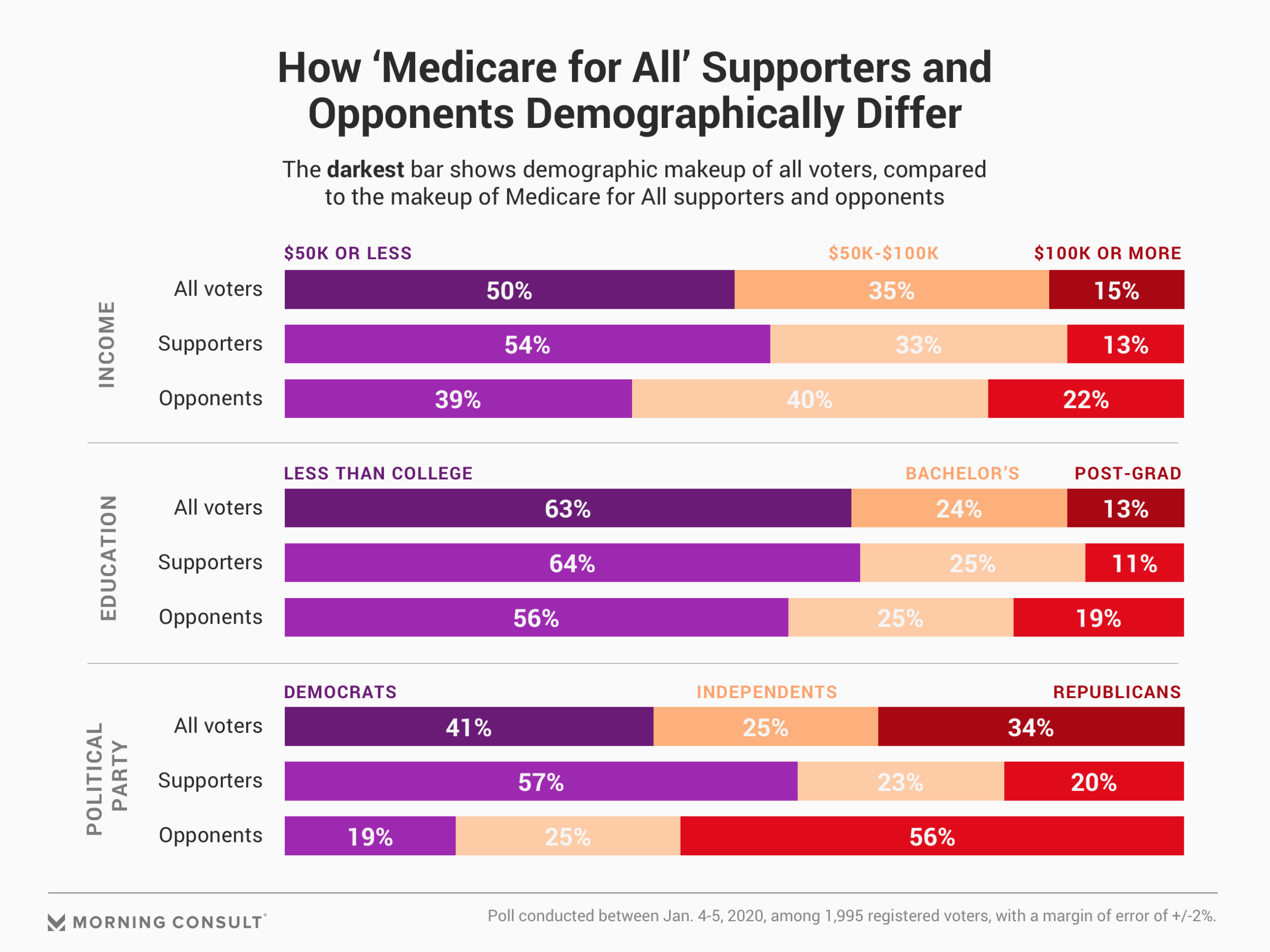 Still, Democratic strategists and some members of center-left organizations, such as the Blue Dog Coalition and Third Way, worry that the gradual decline in support visible in a national poll reflects a hesitancy from moderate voters concentrated in vulnerable swing districts.

Gabe Horwitz, senior vice president at Third Way, said Medicare for All is only going to become more politically toxic as the year goes on, since “Republicans haven’t even begun the full-scale attack.”

“Supporters of Medicare for All are predominantly from very safe Democratic districts,” Horwitz said. “Swing voters, independent voters, ‘blue wall’ states that we need to win back — it is a very different sentiment in places like that. When you look at frontline Democrats with tough general election contests, they’re very worried about Medicare for All.”

Despite turbulence within the Democratic Party on the smartest path forward, voters still place decidedly more trust in Democrats than Republicans to handle health care and protect Medicare and Social Security, by 15- and 17-point margins, respectively, in the latest poll.

While the extra attention on Medicare for All this year may have complicated matters politically for Democrats, Robert McLean, president of the American College of Physicians, said a more policy-focused lens helped his group use “evidence-based analysis” to assess the legislative text of the plans. ACP, the second-largest physicians group in the United States, ultimately opened 2020 with an endorsement of a single-payer system for the first time in its history, and McLean said he expects other physicians groups to follow.

Unlike Horwitz, who maintains that people grow increasingly wary as they learn more about Medicare for All, McLean said substantive debate in 2020 could give the policy a boost and “elevate the sophistication of the problem.”