4 in 10 Adults More Likely to Stream Movies, TV Due to Coronavirus Outbreak

Netflix remained the top SVOD service in 2020's final quarter, accounting for 22 percent of the streaming share, according to Reelgood. (Freestocks.org from Pexels)
By Sarah Shevenock

As the number of cases of the coronavirus — and the number of people self-quarantining — continues to rise, at-home entertainment options could see a boost. New polling finds that roughly one-fifth of consumers who subscribed to a streaming service this year said the coronavirus was at least part of the reason why.

Consumers have a plethora of large-scale and niche streaming services to choose from, with Quibi, HBO Max and Peacock joining the crowd throughout the first half of 2020. A March 5-7 Morning Consult/The Hollywood Reporter poll found that 29 percent of the 2,200 U.S. adults surveyed have subscribed to at least one new streaming service since the beginning of the year.

Twenty-one percent of those who subscribed to a new service this year cited the coronavirus as a major or minor reason for their decision. 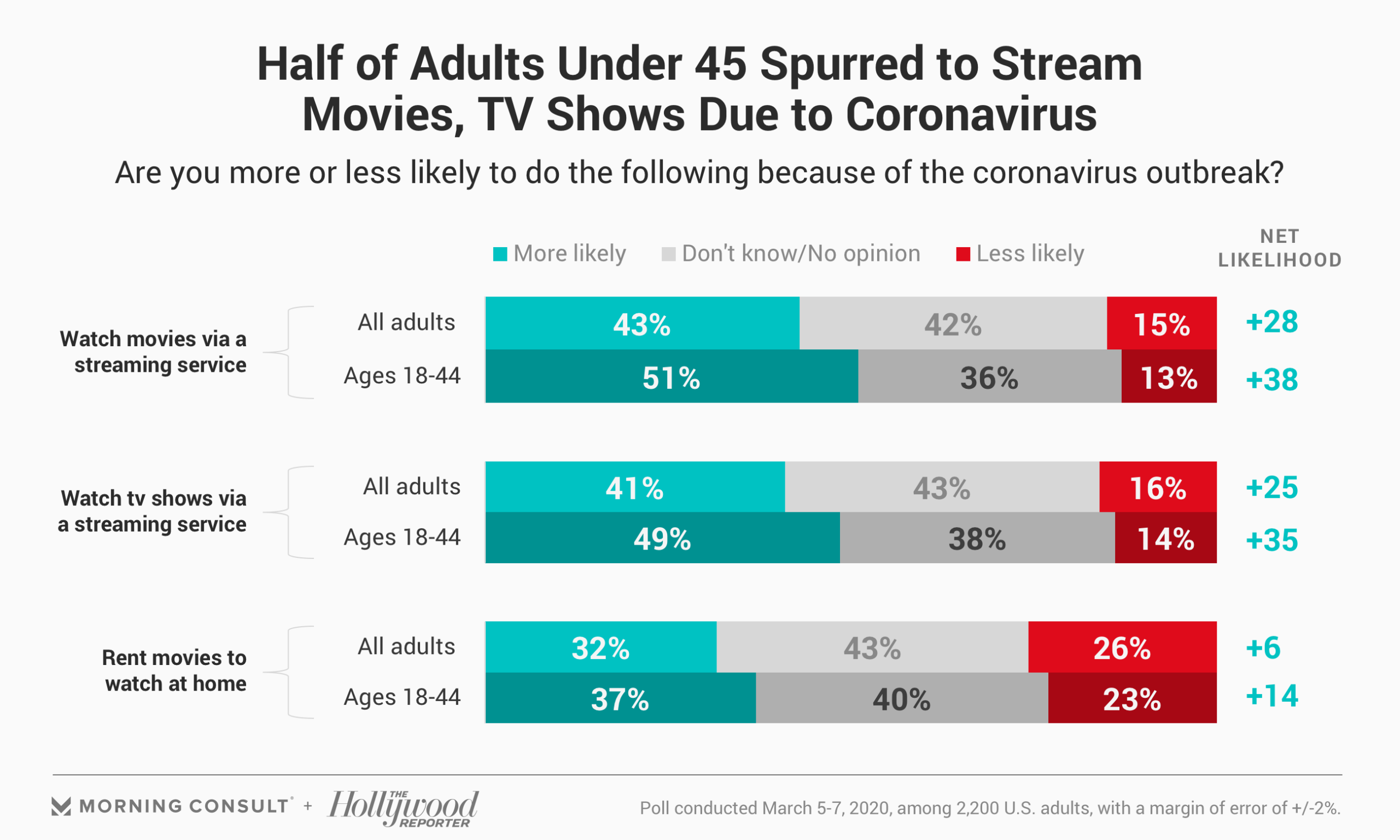 But the interest in renting movies did not match enthusiasm for streaming content: Thirty-two percent of all adults, as well as 37 percent of adults under the age of 45, said they would be more likely to rent movies to watch at home because of the coronavirus outbreak, while 43 percent of the public was unsure.

As for entertainment outside the home, 51 percent of adults said they would support a concert venue’s decision to postpone upcoming shows. But a 44 percent plurality would not approve if the government were to temporarily shut down movie theaters.

The margin of error for the Democratic and Republican subsample is 4 points.

Several major entertainment industry events, such as the SXSW festival, have been canceled in the wake of the coronavirus outbreak, while others, like Coachella, have been postponed. And the latest James Bond Film, “No Time to Die,” was pushed from an April release to Nov. 25 as a result of the epidemic, with MGM Studios, Eon and Universal Studios saying the move came after “careful consideration and thorough evaluation of the global theatrical marketplace.”

Respondents were roughly three times more likely to support the studios’ decision than to oppose it (43 percent to 15 percent). However, a nearly equal share (42 percent) said they didn’t know or had no opinion.