Majority of Democrats, independents and Republicans back pause on nonessential trips 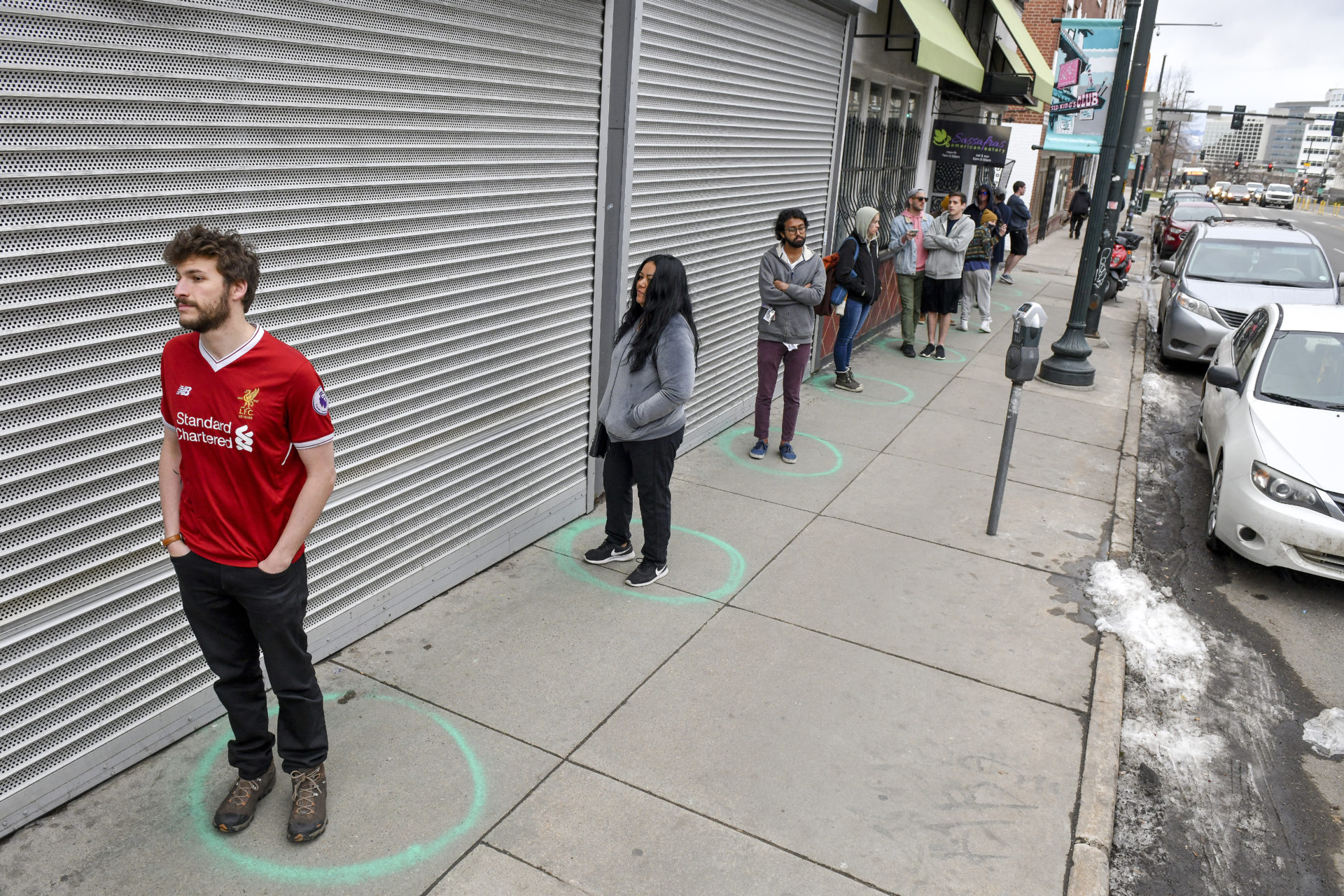 People stand in freshly painted circles, six-feet-apart, as they wait in a two-hour line to buy marijuana products from Good Chemistry on March 23, 2020, in Denver, Colo. Roughly 3 in 4 voters would back a national quarantine, in which all public activity, save for essential travel such as trips to the grocery store and pharmacy, would be prohibited, according to a new Morning Consult/Politico poll. (Michael Ciaglo/Getty Images)
By Yusra Murad

Even as top officials in a dozen states and counting announce mandatory quarantines — prohibiting all nonessential activity and imposing near-lockdown measures to blunt the spread of the coronavirus — the Trump administration has rejected enforcing such measures nationwide, with Vice President Mike Pence saying Tuesday that the COVID-19 task force has “at no point” considered a national lockdown.

But while the president seems keen on restarting the economy and lifting restrictions by Easter Sunday, at odds with the health officials in his own administration pleading with the public to stay home, a new Morning Consult/Politico poll finds voters of all political leanings widely support a U.S. quarantine to control the pandemic.

Related: Most U.S. Adults Practice Some Degree of Social Distancing Amid Coronavirus Spread

The survey of 1,996 registered voters, conducted March 20-22, finds roughly 3 in 4 voters back a national quarantine, in which all public activity, save for essential travel such as trips to the grocery store and pharmacy, would be prohibited.

Though Democrats are more firmly in favor of a national quarantine, with 81 percent of the electorate saying they support such a measure, a majority of Republicans (72 percent) and independents (69 percent) are also supportive. The survey has a margin of error of 2 percentage points. 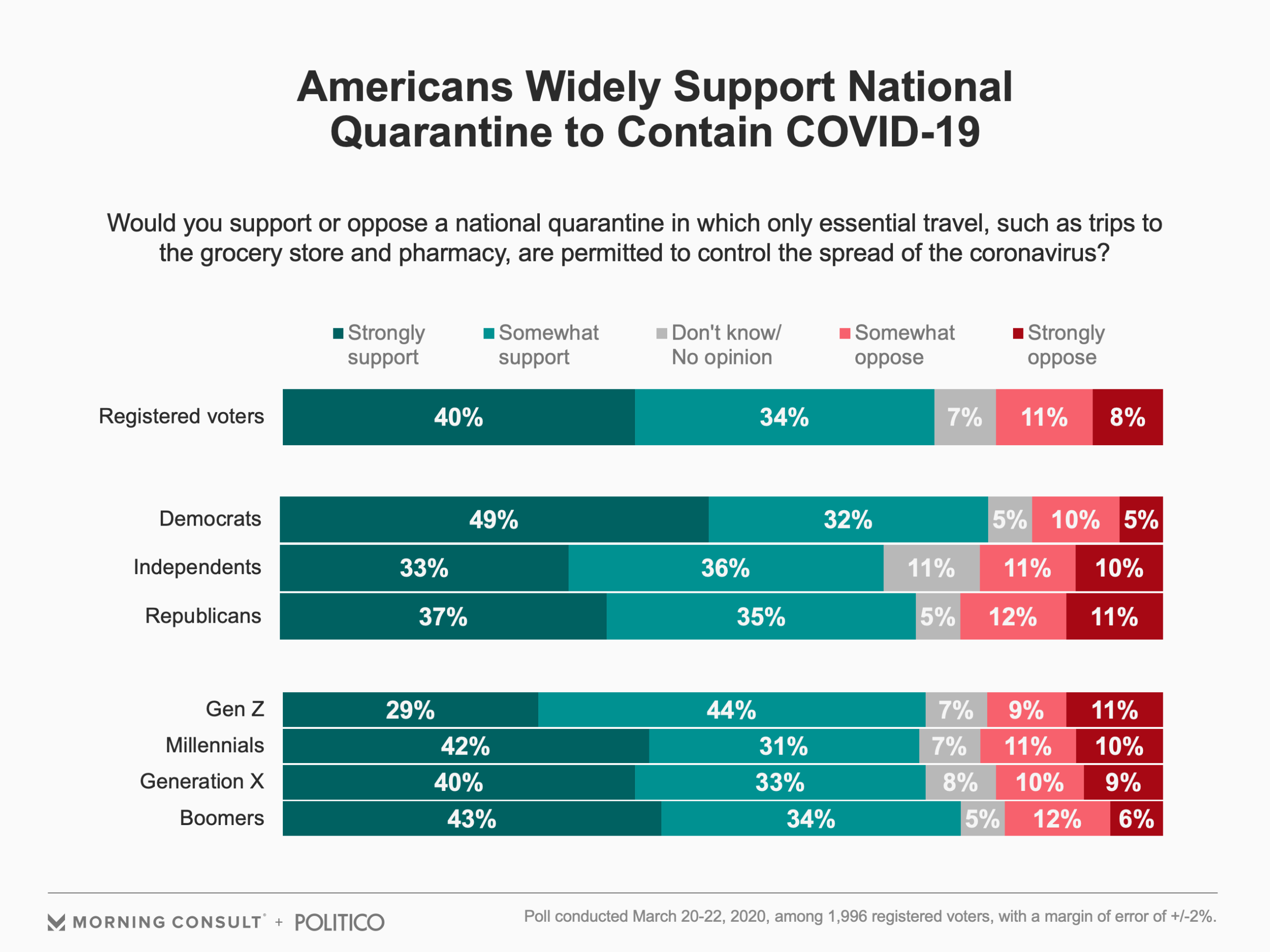 While the Trump administration has activated the National Guard to enforce statewide stay-at-home orders, such as in California, Washington and New York, the National Security Council and National Guard rejected reports that a plan for a national shutdown is in consideration. Whether the administration would have legal standing to do so is a subject of debate, but many public health experts and physicians believe such aggressive measures may be required to contain the virus that has infected tens of thousands of  Americans, pushing the World Health Organization to warn the United States may be the new epicenter of the pandemic.

Even in states without lockdown measures, public activity has slowly ground to a near-halt, as local, state and federal officials have taken stringent measures to limit the spread of the virus. The poll finds a small share of Americans relatively optimistic that social distancing will end quickly, with 6 percent saying it will end in the next two weeks and 20 percent expecting to return to public spaces in the next month, while another 27 percent predicts two months. Democrats are slightly more conservative in their projections than Republicans — 39 percent anticipate at least three months of social distancing and shuttered public spaces, compared to 26 percent of GOP voters who feel the same. 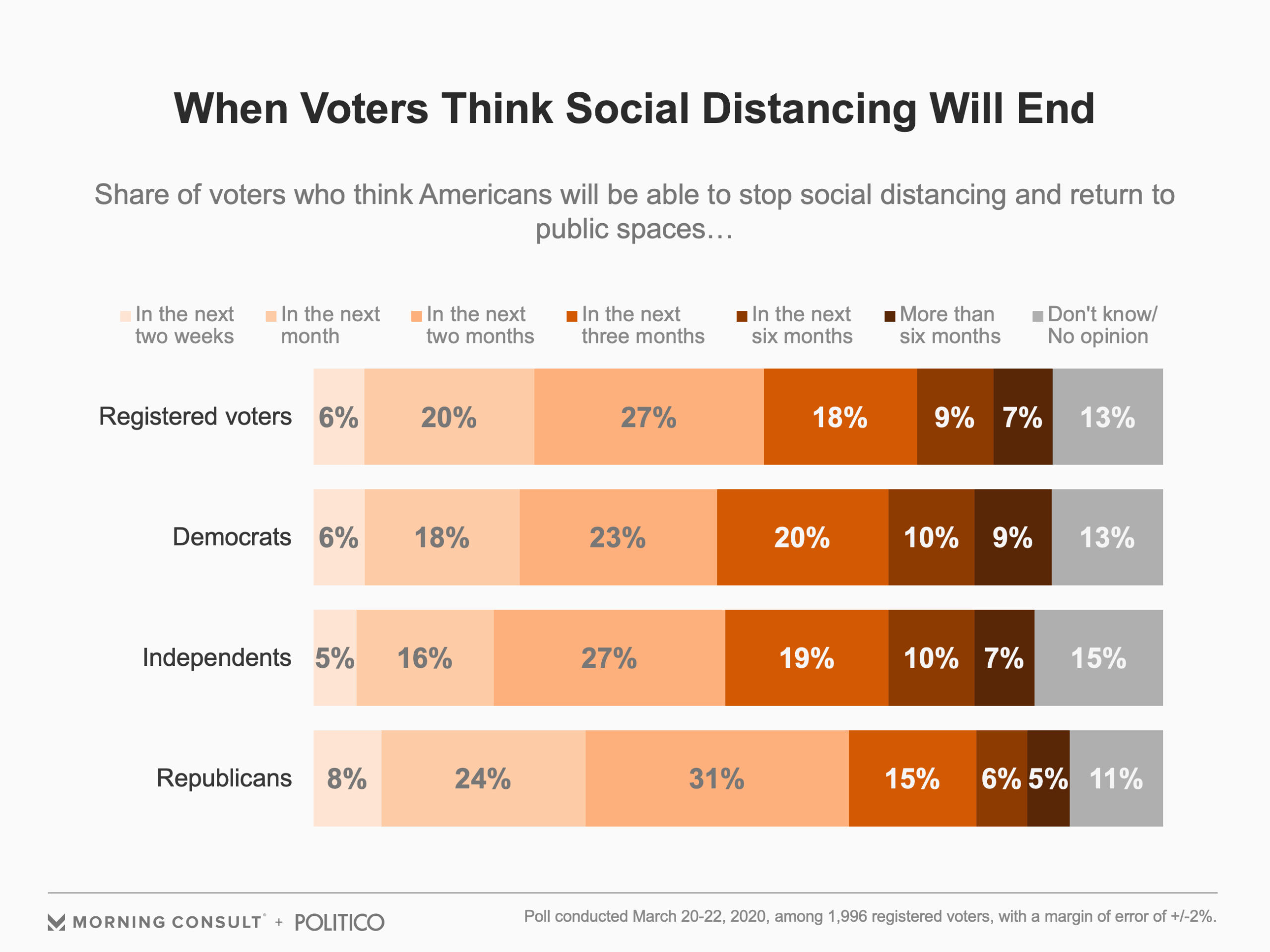 The public health emergency has rapidly become a political lightning rod, with Republicans breaking from Democrats and independents on a range of questions probing Americans’ perception of threat and assessment of the U.S. response.

Though Republicans and independents are equally as concerned about the outbreak, independents are more than five times as likely to describe Trump’s handling of the coronavirus as “poor,” (39 percent vs. 7 percent). And while a majority of Republicans rate the federal government’s job on six tasks — managing the spread; providing financial support for affected people and businesses; assisting hospitals; developing treatments; developing a vaccine; and testing — as “excellent” or “good,” the picture is exactly the opposite for independents and Democrats: A majority of both groups rated the government’s handling on all five as “just fair” or “poor.”