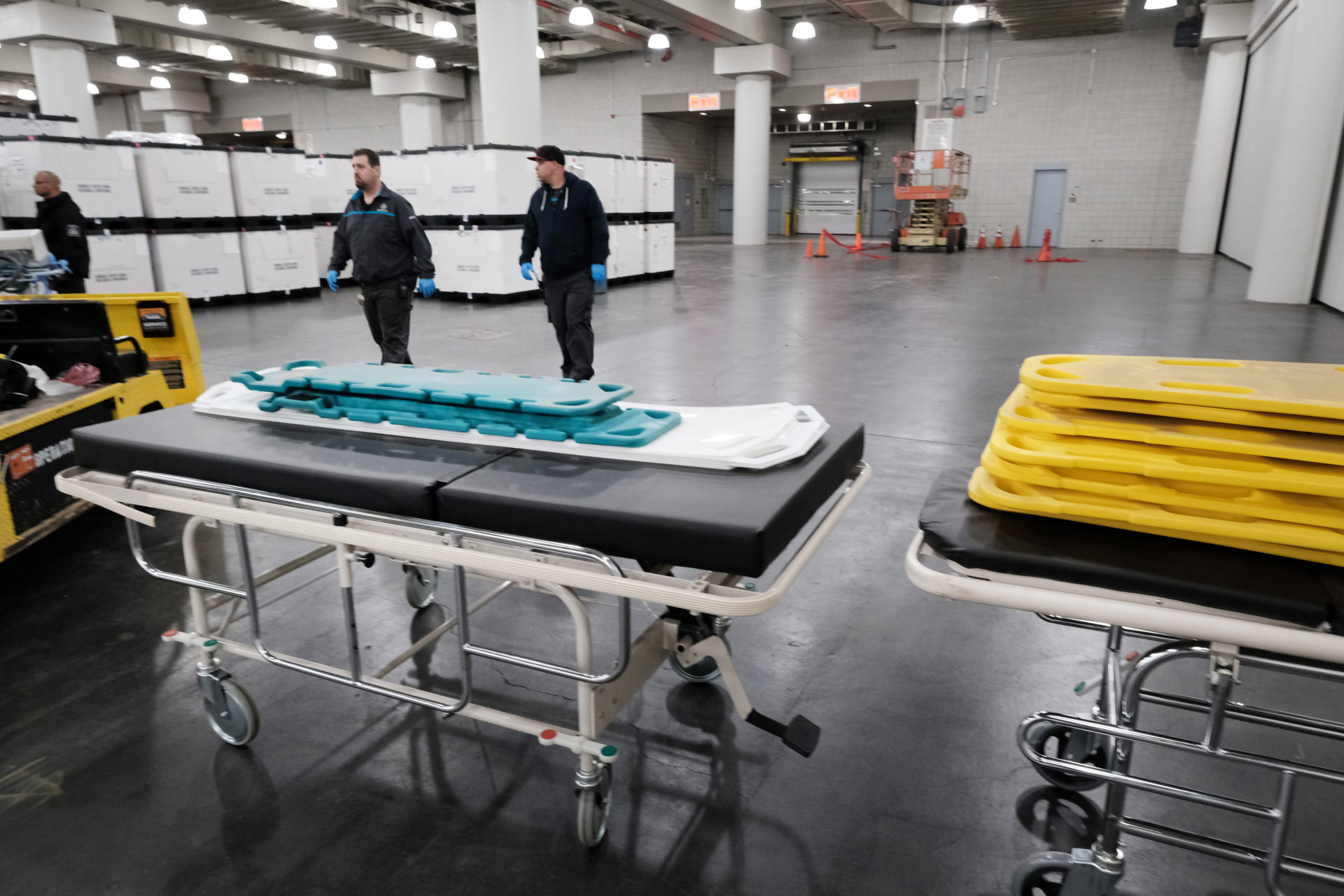 Medical beds are displayed at the Javits Convention Center in New York City on March 23, 2020, as the facility is being turned into a hospital to help address hospital bed shortages amid the coronavirus pandemic. A Harvard analysis found that Connecticut, Massachusetts and Delaware are expected to have the widest bed gaps in the coming months. (Spencer Platt/Getty Images)
By Yusra Murad

The United States’ negligence in coordinating an effective response to the coronavirus has left the health system besieged by a virus spreading through major cities faster than local officials and health workers can possibly keep pace. And in states bracing for major capacity issues, hospitals rapidly drafting “surge plans” to cope with exponential growth in demand are confronting the daunting subtext underlying the need for more beds: a need for more workers to staff them.

Nearly all regions in the country will need to open up existing hospital beds or add new beds to accommodate sick patients. Last week, researchers at Harvard University found the required increase in capacity varies widely by region, and some states are far more vulnerable to nearly insurmountable oversaturation than others, based not on estimates of infected patients but their hospitals’ ability to meet demand.

Though states within striking distance of New York and New Jersey have yet to see the same swell in cases, Connecticut, Massachusetts and Delaware rank highest among all states in their looming shortage of hospital beds, based on the percentage of currently available beds they are estimated to need. If 20 percent of Americans get sick with the coronavirus — shy of most estimates — Connecticut will need to increase its available beds by 481 percent by autumn, followed by Massachusetts and Delaware at 417 and 403 percent, respectively. If 40 percent of Americans fall ill, those figures nearly double.

Eric Dickson, president and chief executive of UMass Memorial Health Care, said the health system activated its disaster medicine assistant team and mobilized to develop a surge plan more than two weeks ago, when the coronavirus was still quietly creeping through the state.

“Start imagining that you’re going through what New York is going through,” Dickson said. “Right now, we’ve got 10 patients in the hospital with it, then we have five patients on ventilators — that number will undoubtedly go up. How high, we don’t know.”

On Tuesday, Massachusetts reported its largest one-day spike in cases, 382, bringing the total to 1,159. According to Dickson, the central region of the state is “the worst place to be” because of its lack of beds and doctors per capita. Top executives from the system’s hospitals are in touch daily, sharing information about the number of patients on ventilators and in the intensive care unit to stretch hospitals to maximum capacity, while simultaneously working with the Army Medical Corps to set up field hospitals in arenas and exhibit halls around the state.

Outfitting new facilities to care for patients is an extraordinarily difficult task, even under normal circumstances. And as arduous as finding space, supplies and equipment has proven, the next phase — finding more workers — appears downright impossible.

Susan Dentzer, a visiting fellow at Duke University’s Margolis Center for Health Policy who has been in regular contact with doctors on the frontlines in New York, said there’s an ongoing argument between many providers and the state about building temporary hospitals.

“The health systems’ attitude is, ‘Look, we can’t even staff what we’ve got here. Who’s gonna go staff these new temporary hospitals?’” Dentzer said. “What we need is people.”

In Connecticut, health officials responded to a sharp rise of coronavirus cases this week with grave warnings that the peak is many weeks ahead. Saud Anwar, a state senator and physician who specializes in lung disease and critical care, said Connecticut is worried not just about the capacity of hospitals, but the volume of patients as the disease travels from neighboring New York and Massachusetts.

Providers described the domino effect of compounding failures — from test, mask and ventilator shortages to a lag on social distancing measures — generating the perfect storm for what could now be the defining, long-term issue of this pandemic. Freeing beds by canceling procedures, erecting temporary hospitals and purchasing equipment can eventually bandage supply and space issues. But no one “has a clue” how to resolve the shortage of doctors, nurses and technicians, Dentzer said.

Connecticut, like many states, is calling on retired workers to come on board, but hospitals don’t expect that will suffice. Many retired physicians are no longer licensed, and it’s not clear how unlicensed professionals could be authorized to do the needed work in the critical care area. Further complicating matters, different states will have different provisions: Delaware, for example, has authorized medical practice by inactive license-holders in good standing for the duration of the state of emergency. Scott Wolfson, a spokesperson for Christiana Care, a health system serving Delaware, said they have been planning as if they are already in a crisis.

None of the hardest-hit countries in the world, including Italy, France and China, have found a solution to the staffing issue, though some efforts are gaining popularity. In the United Kingdom, fourth-year medical students have been tapped to ease the burden on hospitals; this week, some American medical schools began graduating students early, perhaps signaling the beginning of a recognition that what sparse options exist may quickly become unavoidable necessities.

John Prescott, chief academic officer at the Association of American Medical Colleges, said the organization is constantly reevaluating how to both bolster the U.S. response and protect students anxious to get on the frontlines.

At the very least, the U.S. health system can’t afford to lose any workers — but the lack of protective gear threatens to slash the workforce the country does have. Dickson said that to date, UMass has not received a single piece of equipment, despite “numerous” requests made to the federal government.

It’s a mistake to look solely at each individual so-called “hot spot” as they crop up, experts said, when the battlefront is hospitals and the emergency departments across the country.

“If there is an urban center in this country that thinks they’re gonna dodge this bullet, they’re nuts,” Dentzer said.