ANALYSIS: What Consumer Confidence Figures Can Tell Us About When to Reopen the Economy

The COVID-19 pandemic caused many countries to shut down large segments of their economies. While such efforts save lives, they devastate the economy by forcing businesses to close and workers to stay home. The economic impact has been so devastating that many countries are considering accepting some of the health risks associated with lifting bans on certain types of economic activity.

This research note argues that depressed levels of consumer confidence will continue to weigh on consumer spending across advanced economies as long as the number of cumulative COVID-19 cases continues to rise. Thus, reopening the economy without materially decreasing the cumulative number of coronavirus cases is unlikely to stimulate consumer spending or reignite the economy.

To better understand the trade-offs between economic growth and public health, we tested how highly correlated the number of COVID-19 cases is with consumer confidence.

The relationship between the number of COVID-19 cases and consumer confidence provides insight into the optimal prioritization of these two competing aims. A strong negative correlation indicates that reopening the economy before the number of cases falls is less likely to reignite economic activity. On the other hand, a weak negative correlation indicates that consumer confidence and consumer spending could return even without curbing the number of COVID-19 cases.

We found that consumers’ views of the economy and their own personal financial conditions are highly negatively correlated with the number of COVID-19 cases in each of these countries. As the number of cases increases, consumer confidence falls.

COVID-19 exerted downward pressure on consumer confidence, but that does not mean that containing or eradicating the virus will in and of itself allay all of consumers’ concerns. The virus and economic shutdown have already caused widespread layoffs and economic harm that cannot be immediately reversed simply by stopping the spread of the virus. Policies to remedy these economic hardships will play an important role as well in boosting consumer confidence.

Since Feb. 1, 2020, consumer confidence has fallen most sharply in Japan and the least dramatically in France. The percentage decreases across the United States, United Kingdom and Germany are all similar. 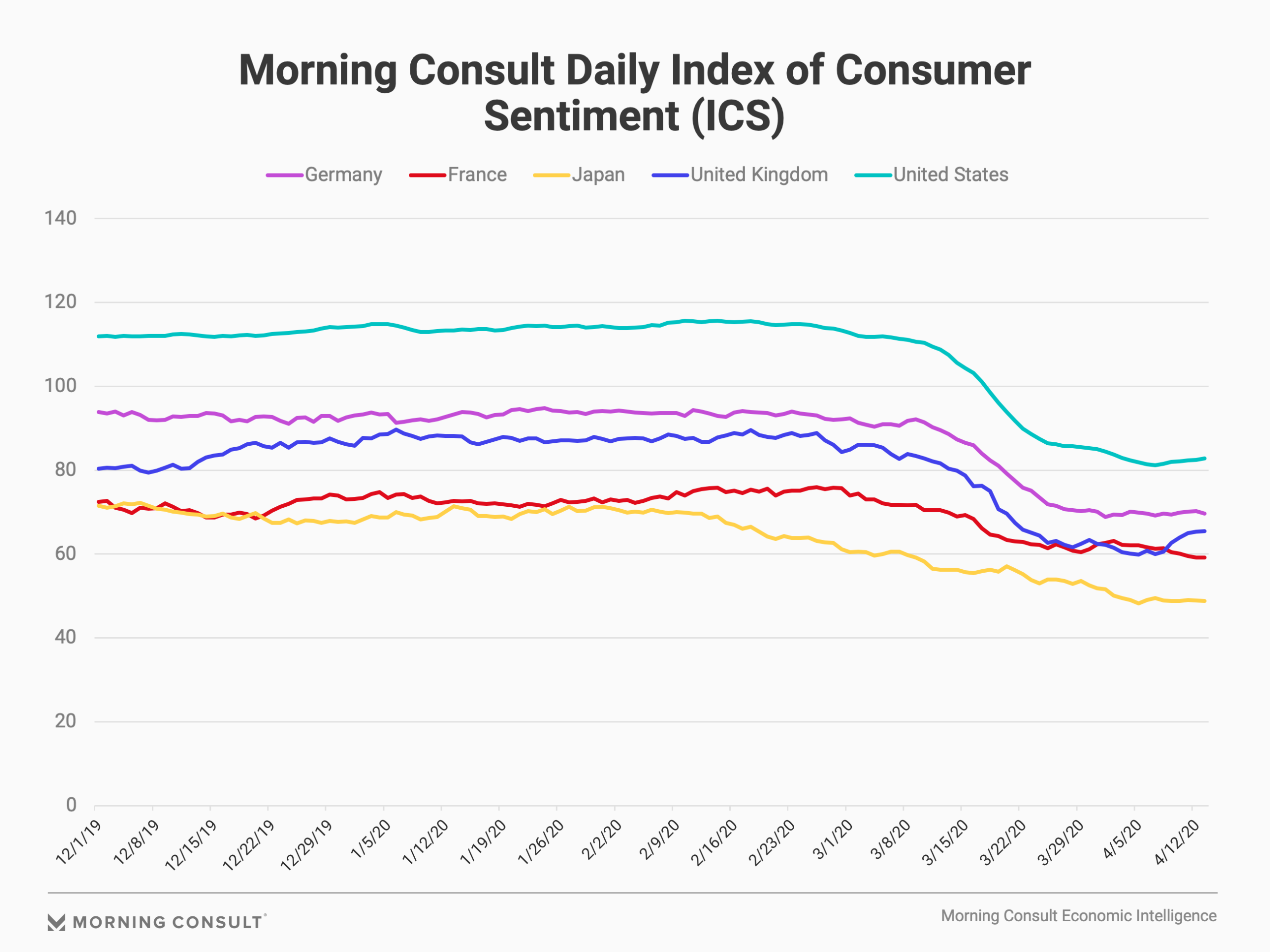 While consumer confidence significantly deteriorated in February and March, the graph above shows that the rate of decrease has slowed across four of these countries. In the United States, United Kingdom, Germany and France, the largest single-day decline occurred between March 17, 2020 and March 19, 2020. Consumer confidence in the United Kingdom has actually increased since April 5, 2020.

The cumulative number of confirmed COVID-19 cases in a given country is one of the most widely cited statistics summarizing the state of the outbreak in that country. The graph below charts this statistic for the five countries from Jan. 22, 2020, through April 13, 2020. 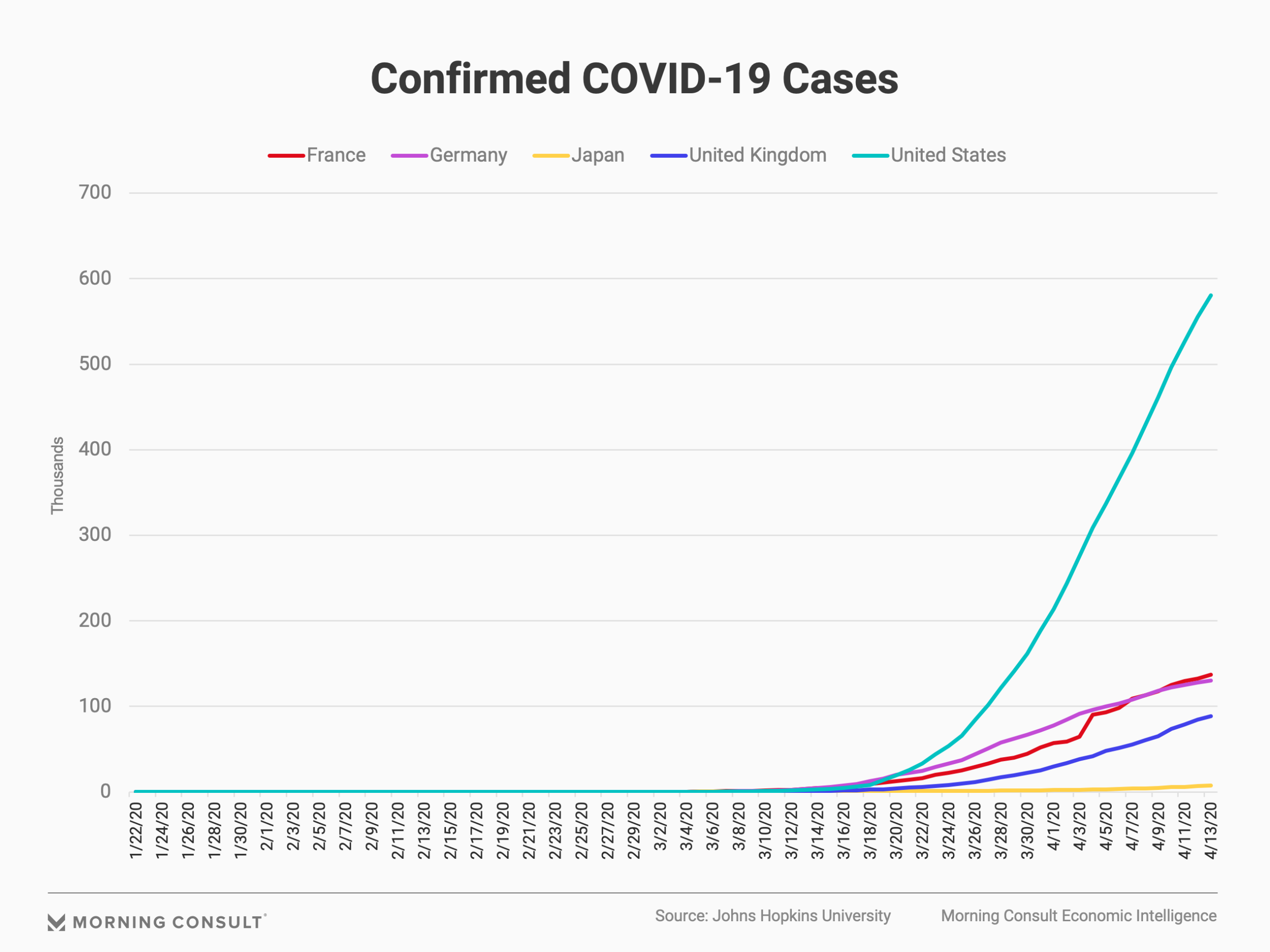 The table below presents the correlation between daily consumer confidence and the number of confirmed COVID-19 cases for France, Germany, Japan, the United Kingdom and the United States across three time lags. Testing different time lags provides insight into the possibility that it takes one or two days for consumers to process the updated number of confirmed COVID-19 cases and incorporate it into their economic outlook.

*Values are the strongest negative correlations for each country.

This relationship is strongest in Germany and weakest in the United Kingdom. The relatively weak negative correlation in the United Kingdom is a function of the increase in confidence over the past five days, which directly corresponds to the announcement that U.K. Prime Minister Boris Johnson, who had tested positive for the coronavirus, was released from the intensive care unit after his health improved. Thus, the recent surge in U.K. consumer confidence reflects the outsized role that Johnson’s own personal health played in the media and the minds of the public. As focus in the country returns to the health of the general population, British consumers are likely to grow less confident.

The difference between Germany and France is surprising given the similarity of these countries in terms of geography, currency and number of confirmed COVID-19 cases. The total number of confirmed cases is similar across both countries (136,779 in France and 130,072 in Germany as of April 13, 2020). However, French consumers have not grown as pessimistic as their German neighbors.

Structural differences between the German and French economies explain some of this difference. Notably, manufacturing accounts for a larger portion of Germany’s economy, and Germany exports more of its total output than France. Taken together, these differences expose Germany to slowing global growth to a greater degree than France.

Table 1 also provides insight into consumers’ news consumption habits. With the exception of Japan, the cumulative number of cases on a given day is more highly negatively correlated with confidence on that same day compared to the following two days. One may have expected the number of cumulative cases today to be more highly correlated with consumer confidence tomorrow or the following day as consumers digest the news. This result indicates that consumers are highly aware of daily COVID-19 developments in their respective countries, essentially in real time.

In Japan, increasing the time lag between the announcement of confirmed cases and the date of the survey strengthens the correlation, which is consistent with the fact that the number of new cases in Japan has been relatively stable compared to the other four countries. Thus, consumers in Japan have less of a need to update their economic outlook based on the most recent update to the number of confirmed cases.

Consumers across the world are closely following the coronavirus outbreak, and their assessment of their respective economies evolves in line with the cumulative number of COVID-19 cases in their respective countries. In Japan, consumers more closely follow the number of COVID-19-induced deaths, which is likely a function of skepticism regarding testing in Japan. This finding suggests that policymakers have to slow the number of confirmed cases and COVID-19-induced deaths before consumer confidence and consumer spending can improve. Reopening the economy in an environment of depressed consumer confidence is unlikely to generate adequate economic activity to justify the health risks.