How Concern Over Climate Change Correlates With Coronavirus Responses

People walk the streets of New York City while wearing face masks amid the coronavirus pandemic on April 25, 2020. Morning Consult polling found that 54 percent of climate-concerned respondents “always” wore a face mask during the past month, while 30 percent of adults unconcerned about climate change have done the same. (Jamie McCarthy/Getty Images)
By Lisa Martine Jenkins

Adults who say they are not concerned about climate change are less likely than the general public to be taking personal actions to mitigate the effects of the coronavirus, new Morning Consult data shows. And in contrast, climate-concerned U.S. adults are more likely to be taking these actions, which include wearing masks in public, social distancing and disinfecting the home and personal electronics.

In a poll conducted April 14-16, 54 percent of climate-concerned respondents said that they have “always” worn a mask in public spaces such as grocery stores or parks over the last month, whereas just 30 percent of the climate-unconcerned said the same — a 24-point gap. Across all adults, 44 percent said they always followed those measures.

The poll surveyed 2,200 U.S. adults and has a margin of error of 2 percentage points. The climate-concerned and climate-unconcerned cohorts have 3- and 4-point margins of error, respectively. 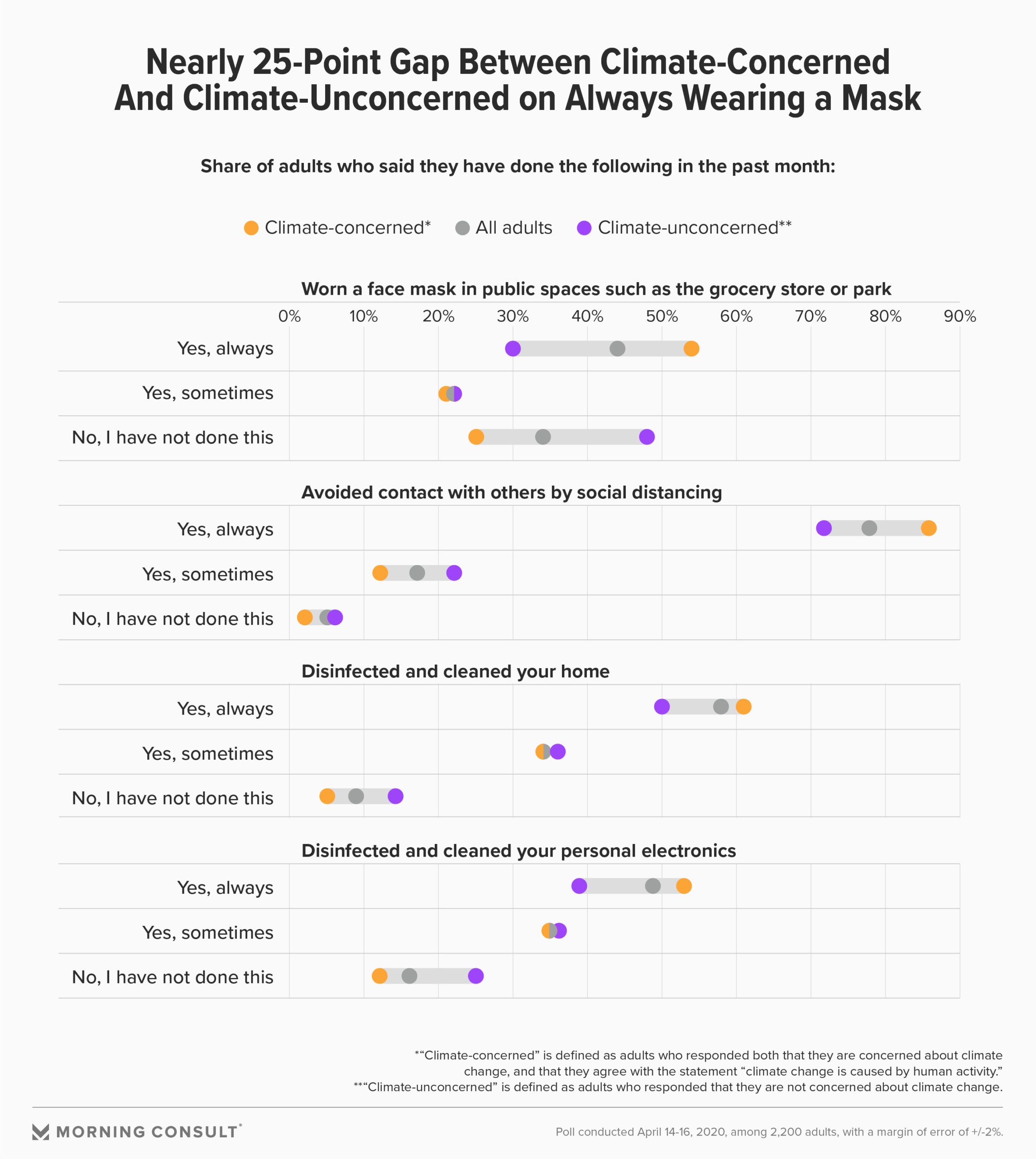 Experts say the discrepancy can be traced either to science skepticism or to personal autonomy concerns, the combination of which has fueled climate change dismissal and denial for decades.

Emma Frances Bloomfield, an assistant professor in communication studies at the University of Nevada, Las Vegas, said there are several potential narratives for why a person unconcerned with climate change might be less inclined to take action to mitigate the effects of the coronavirus. These include a general skepticism of authority — specifically authority associated with science, health and medicine — as well as an outlook concerned more with individual than community-level well-being.

“Everything that science asks us to do is really sacrificing personal convenience for community convenience and well-being,” Bloomfield said. “And for a lot of people, the coronavirus is invisible, just like climate change is invisible. A lot of people don’t know people who have been directly affected, and in the case of climate change, a lot of the more severe effects are still years away.”

Renée Lertzman, a psychologist and organizational strategist who focuses on climate change, echoed that this is a question of psychological orientation.

“If you’re aware of climate change and you’re concerned about it, you are already aware that there are myriad things that we do as humans that have profound impacts that we may or may not see,” she said.

The coronavirus pandemic, however, is forcing everyone to take stock of their choices and connect the dots to their communities and the world at large in a way that might not be entirely comfortable to those who aren’t used to it. Lertzman said the ability to draw those connections is a “very psychologically charged” activity. 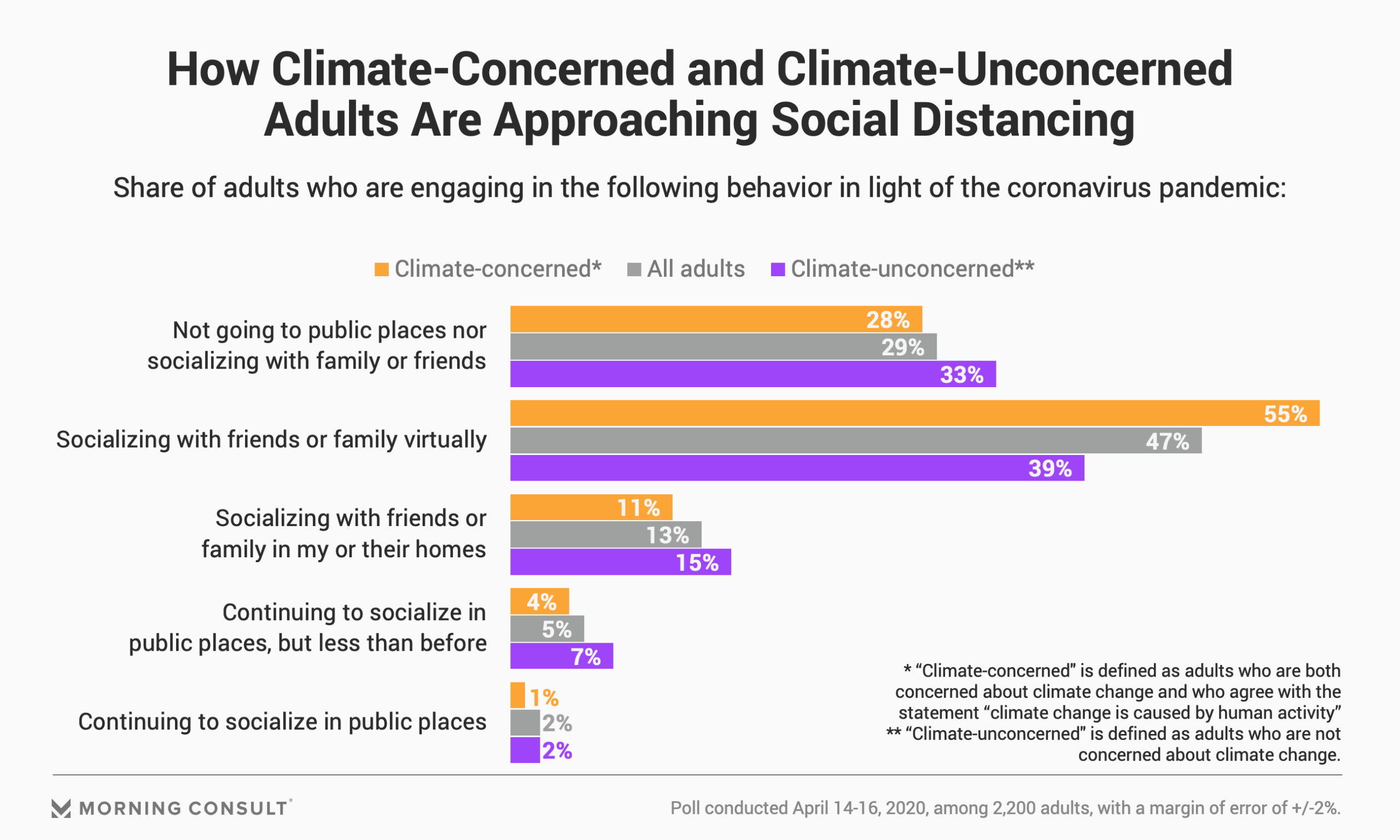 Ed Maibach, director of the Center for Climate Change Communication at George Mason University, said that in the United States, the most important predictor of a person’s attitude toward climate change is his or her political ideology. “Conservative Republicans are much more likely to be climate skeptics, and liberal Democrats are much more likely to be seriously concerned about climate change,” he said.

Bloomfield agrees, saying that conservatives and older generations are less willing to make personal sacrifices. Part of this is due to “identity markers,” such as an allegiance to the Republican Party, which she said places those groups against both environmentalism and practices that would restrict the coronavirus’ spread.

The demographic data bears this out. Of the 562 adults in the climate-unconcerned group, 65 percent self-identify as conservative, and 36 percent are baby boomers. Seventy-three percent do not have at least a bachelor’s degree.

Maibach attributes this partisan divide — which has intensified in the last two decades — in part to an information campaign by the fossil fuel industry aimed at undermining public confidence in scientists and burying data on the impacts and causes of climate change. And the campaign seems to be having an impact on reactions to the coronavirus pandemic, as well, he said.

The pandemic, Lertzman said, bears a resemblance to climate change but operates at a faster pace and on a smaller scale. Its effects are more visible, and our reaction is more immediate, but it is a “poignant moment” in its reveal of how humans react to the need for mass mobilization in the face of an abstract threat.

“We’re really seeing that we’re capable of a profound lack of care as humans,” she said earlier this month, during a week that saw hundreds of protestors in several cities calling for a reopening of the economy. We are seeing what society is capable of in the positive sense, she said, but we also are seeing the glaring inequities that emerge in times of crisis: “it’s all related; it’s all on the same continuum of the climate crisis.”