If Movie Theaters Reopen, People Say These Steps Will Make Them Likely to Return

Just over half of respondents in an April 23-26 Morning Consult/The Hollywood Reporter survey said they would be more likely to see a movie if theaters sanitized every seat in between movies, in addition to sanitizing high-touch areas, within one month after their state passed benchmarks for reopening set by the White House. (Pixabay / Pexels)
By Sarah Shevenock

As states and localities begin to reopen public spaces, including movie theaters, new data shows which steps consumers want theaters to take to make spaces safer, including sanitizing seats and high-touch surfaces, as well as limiting the number of people in a theater.

This may not be enough to comfort moviegoers, however, with at least one health professional saying  caution is still needed even with these measures in place. 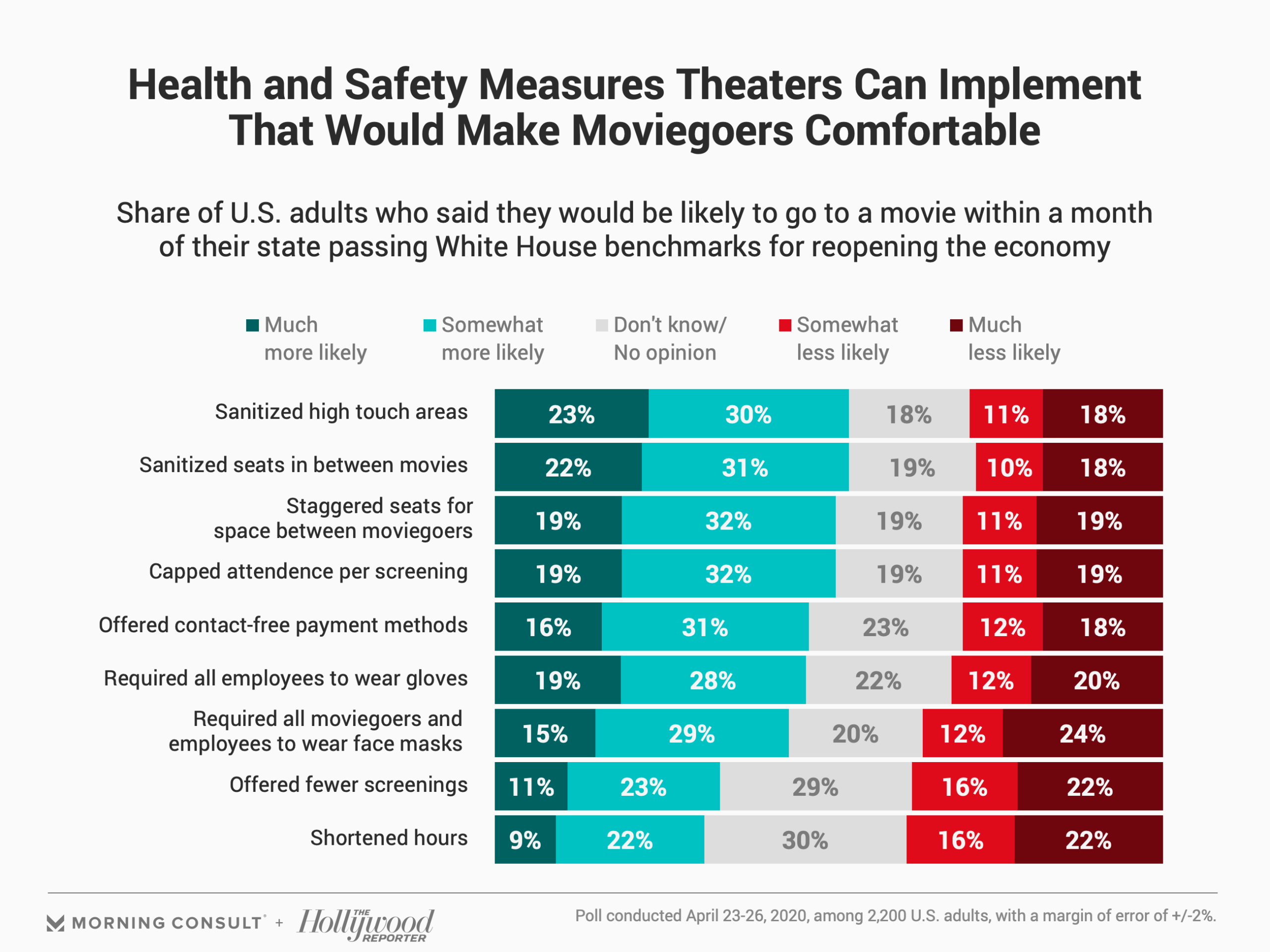 Just over half (53 percent) of respondents in an April 23-26 Morning Consult/The Hollywood Reporter survey said they would be more likely to see a movie if theaters sanitized every seat in between movies, in addition to sanitizing high-touch areas such as concession stands, within one month after their state passed benchmarks for reopening set by the White House.

Fifty-one percent said that if theaters staggered seats and limited the number of people in each theater, that would also make them more likely to return.

Some states, such as Texas and Georgia, that haven’t met government benchmarks, which include a 14-day downward trajectory of documented COVID-19 cases and robust testing, have allowed theaters to reopen this week, even as many theater chains say they won’t resume operations until new films come out this summer.

Related: Americans Remain Pessimistic About Entering Public Spaces in the Near Future

But that’s if people even show up to the theaters: 80 percent of the 2,200 U.S. adults surveyed are unlikely to go to a movie theater before their state meets established benchmarks, although 22 percent said they were likely to go within a month after that happens.

Twenty-three percent of millennials said they would go to a movie theater before their state met benchmarks, but the majority (69 percent) said they were unlikely to do so.

Amanda Castel, a professor of epidemiology at George Washington University and a physician specializing in infectious disease, said that putting a definitive time to safely reopen movie theaters is difficult, as different states are at different stages of fighting COVID-19. She added that just because a venue can open, doesn’t mean it is wise to “abandon all other safety measures that have been put in place.”

Castel said it’s important to train employees how to safely interact with moviegoers and how to respond if they are concerned about a customer. Movie theaters can learn from grocery stores and other retail establishments that have adapted to the COVID-19 era, she said. 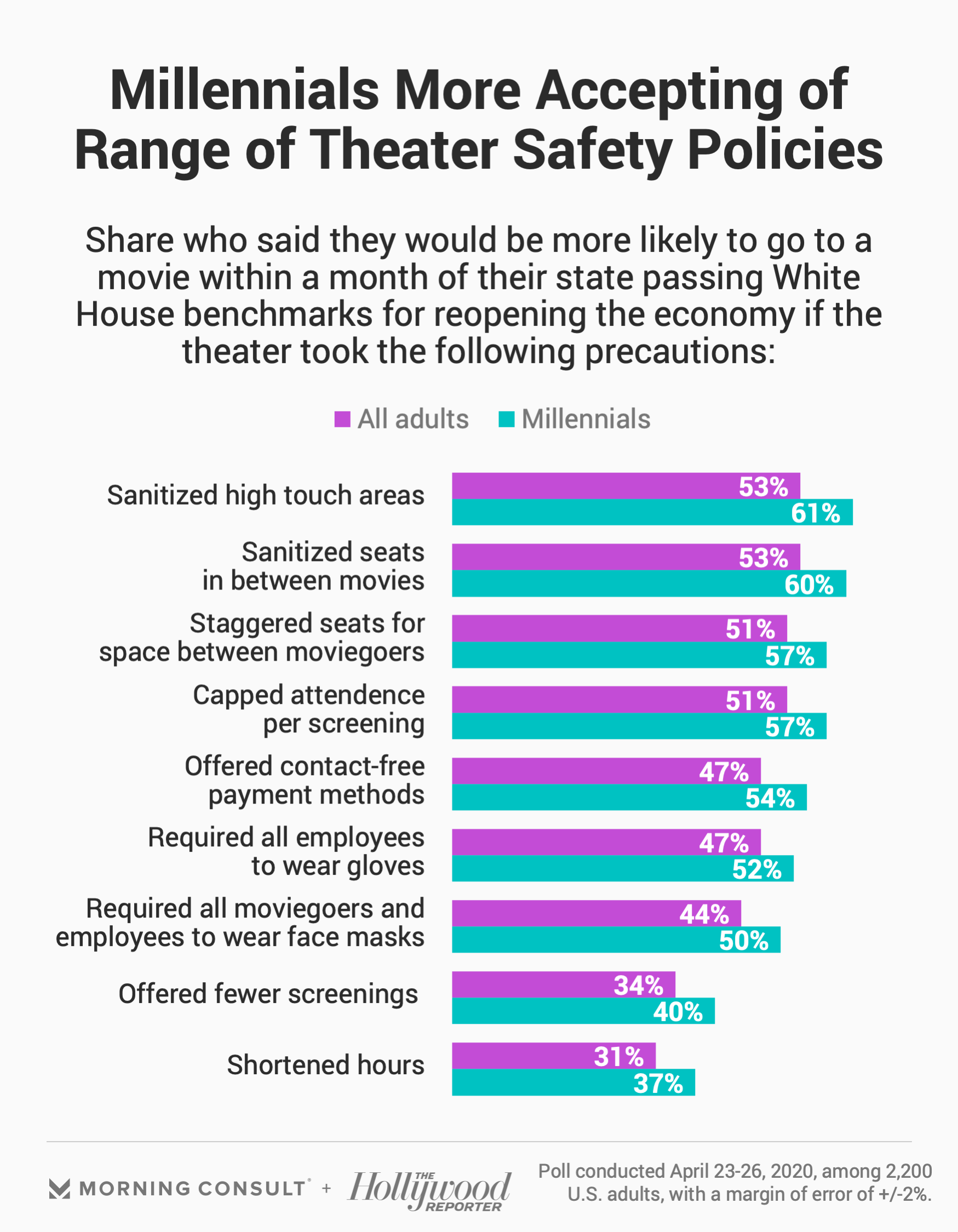 Notably, some of the public is less likely to frequent theaters under some new policies, such as requiring all moviegoers and employees to wear face masks: 36 percent said they’d be less likely to go to the movies in that case.

However, half of millennials and 44 percent of adults said enforcing mask wearing would make them more likely to return to the movies.

Castel said that it will be “prudent” to continue to wear masks in public places.

“Just because the doors open it doesn’t mean you abandon these social distancing and safety measures that we’ve put in place,” she said.

Overall, millennials, the age group that the Motion Picture Association says has the most frequent moviegoers, or those who see at least one movie in theaters each month, said they would be more comfortable attending movie theaters if they underwent each of the policies listed.

Both surveys have an overall margin of error of 2 percentage points, while the millennial and Hispanic demographics have a 4-point and 5-point margin of error, respectively.

Cinemark Holdings Inc. declined to comment on specific plans but said that it is “working toward a mid-summer opening date, contingent upon health and safety regulations, as well as availability of studio content.”

AMC Entertainment Holdings Inc., Cineworld PLC and The National Association of Theatre Owners did not respond to requests for comment.