Jeremy Gabriele and Emily Gabriele star in "TikTok to Love," while Nicholas Podany stars in “Cultish,” TikTok shows they have filmed and produced. (TikTok/ Morning Consult illustration by Samantha Elbouez)
By Sarah Shevenock

The coronavirus pandemic upended the actor’s final performances as Albus Potter in the Broadway production of “Harry Potter and the Cursed Child” after casting spells for roughly a year on stage. So he switched to the virtual stage of TikTok, where he’s playing eight characters in his scripted show “Cultish,” as well as writing, directing, editing and filming the program. That’s in addition to composing the series’ original score and working to resolve the issues that come along with trying to film a show in your childhood home, such as creating a makeshift recording studio and fashioning costumes and props that your parents saved from your adolescence.

TikTok’s popularity has exploded, with 28.8 million U.S. unique viewers using the app in March and each user averaging 858 minutes of viewing, according to Comscore Inc. data. The platform gained notoriety for its goofy, amateur-led less-than-a-minute videos: viral dances that involve intricate footwork, funny videos of pets or users mismatching audio clips with video they take at home. But Bloomberg recently reported that the platform is working on broadening its appeal and has had discussions about producing its own original shows.

With younger consumers turning to their phones for both social networking and entertainment, TikTok could be the perfect platform to merge the two.

“Social and video are coming together in a lot of different ways. And I think you’re seeing it play out on TikTok,” said Debra Aho Williamson, principal analyst with eMarketer, who suggested that the platform is birthing a new generation of filmmakers.

Podany, who currently has more than 128,000 followers on TikTok, fell into making “Cultish” after he left New York City to quarantine with family. An actor and musician who has previously worked on films, he decided to use this period of isolation to not only stay sharp while in between jobs, but to create new work.

After making some standalone TikToks that received a good response online, he produced the first episode of “Cultish,” which he said “took on a life of its own.”

The first episode, posted April 3, has been viewed 2.2 million times on the app. The four subsequent episodes have each averaged more than 206,000 views.

Jeremy Gabriele has a similar story. The 20-year-old college student found an audience on the platform posting episode recaps and analysis related to “The Bachelor” franchise. With all of his coronavirus-induced free time and no “Bachelor” content to cover, Gabriele decided to create his own version of a dating show, “TikTok to Love” — with his sister as the protagonist. Episodes chronicled her conversations with men who applied to be on the show, with one suitor eliminated each week in a live virtual rose ceremony that allowed viewers to interact with Gabriele and his sister in real time.

Gabriele has 72,300 followers on the platform. Each TikTok in the dating show series, which aired weekly from March 30 to April 29, averaged 88,800 views. 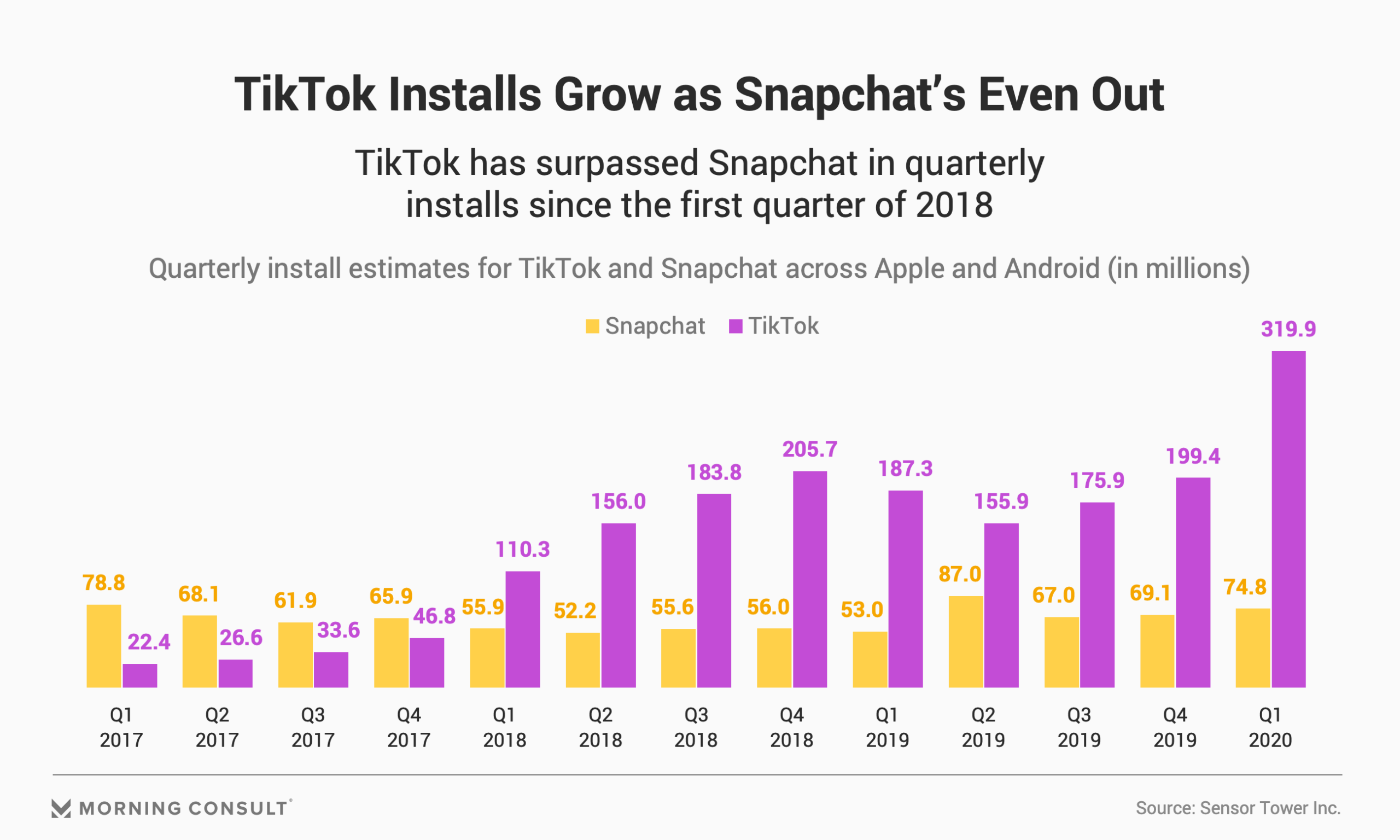 TikTok’s popularity has steadily ticked up around the world. TikTok surpassed Snapchat in quarterly installs in all countries in which they are both available for the first time in the first quarter of 2018, according to data from Sensor Tower Inc. In the first quarter of this year, TikTok was installed more than 319.9 million times, while Snapchat netted 74.8 million installs during the same time period.

While both TikTok and nascent streaming service Quibi are designed with the intent of watching video on the go, Steve Nason, director of research at Parks Associates, said that TikTok has more in common with YouTube: Both services have large amounts of user-generated, short form video, while Quibi relies on professionally produced original content.

And while it’s difficult to project TikTok’s success in the original content game without seeing a lineup of offerings, Williamson said the platform was more comparable to Snapchat, which has an overlapping user base with TikTok. According to Comscore data, 47 percent of Snapchat users ages 18-24 also visited TikTok, while 85 percent of TikTok users in the same demographic also visited Snapchat.

Nason said it may be difficult for TikTok to attract big partnerships — like Quibi’s deal with Steven Spielberg — if the company doesn’t expand beyond its young audience.

“The young age group, especially those under 18, are not going to TikTok for serialized content unless it’s an influencer they’re really interested in,” he said.

He suggested that TikTok could begin working with creators who already produce within the app’s ecosystem, but said partnerships with studios or networks might not be the best route.

“If it’s more financially viable for them to go on their own or go on another platform, then they would certainly go with the money,” he said.

“Having some sort of overall plan for what is being shown certainly makes it more brand safe for potential advertisers,” she said. “It also gives users of TikTok a better sense of what they’re going to get when they’re watching these videos.”

One potential obstacle is TikTok’s user interface, which invites hours of scrolling via its “For You” landing but makes it difficult to follow serialized content, a problem Podany identified when starting “Cultish.”

“The first thing you see is the ‘For You’ page. And if my ‘Episode Five’ comes up, you’re not going to understand what’s happening,” he said.

Williamson said TikTok could make some adjustments to make the app more conducive to serialized content, such as adding a third feed —  in addition to the “Following” and “For You” pages — that would bring together episodes of a scripted show, as well as provide notifications when a new episode of a show has been posted.

TikTok, Snap Inc. and Quibi did not respond to requests for comment.

Though “TikTok to Love” and “Cultish” were prompted by social distancing during the pandemic, their respective creators have plans for future installments. Gabriele is planning future seasons of “TikTok to Love” — perhaps featuring a male lead — and is interested in taking on sponsors to monetize his content, something he said would legitimize the project.

Podany, who has created a second series, is less definitive about his future plans for “Cultish,” but could see the show having a post-pandemic life.

“I don’t view this as a job or as a source of income or even a hobby,” he said. “This is really just something nice that’s happening. If quarantine has ended and I haven’t finished the story, then of course I’ll do it for the story.”