As Some Spaces Reopen, Consumers’ Uncertainty of Doing Some Activities Is Shrinking

In recent Morning Consult trend data, fewer respondents said they didn't know or offered no opinion when asked when they'll feel comfortable doing activities such as going out to eat or attending a political rally. (Pexels/Burst)
By Alyssa Meyers

As restaurants, retailers and other businesses slowly move toward reopening their doors following the relaxation of stay-at-home orders in some states, new trend data shows that consumers’ uncertainty about when they expect to feel comfortable returning to public spaces is ticking down. 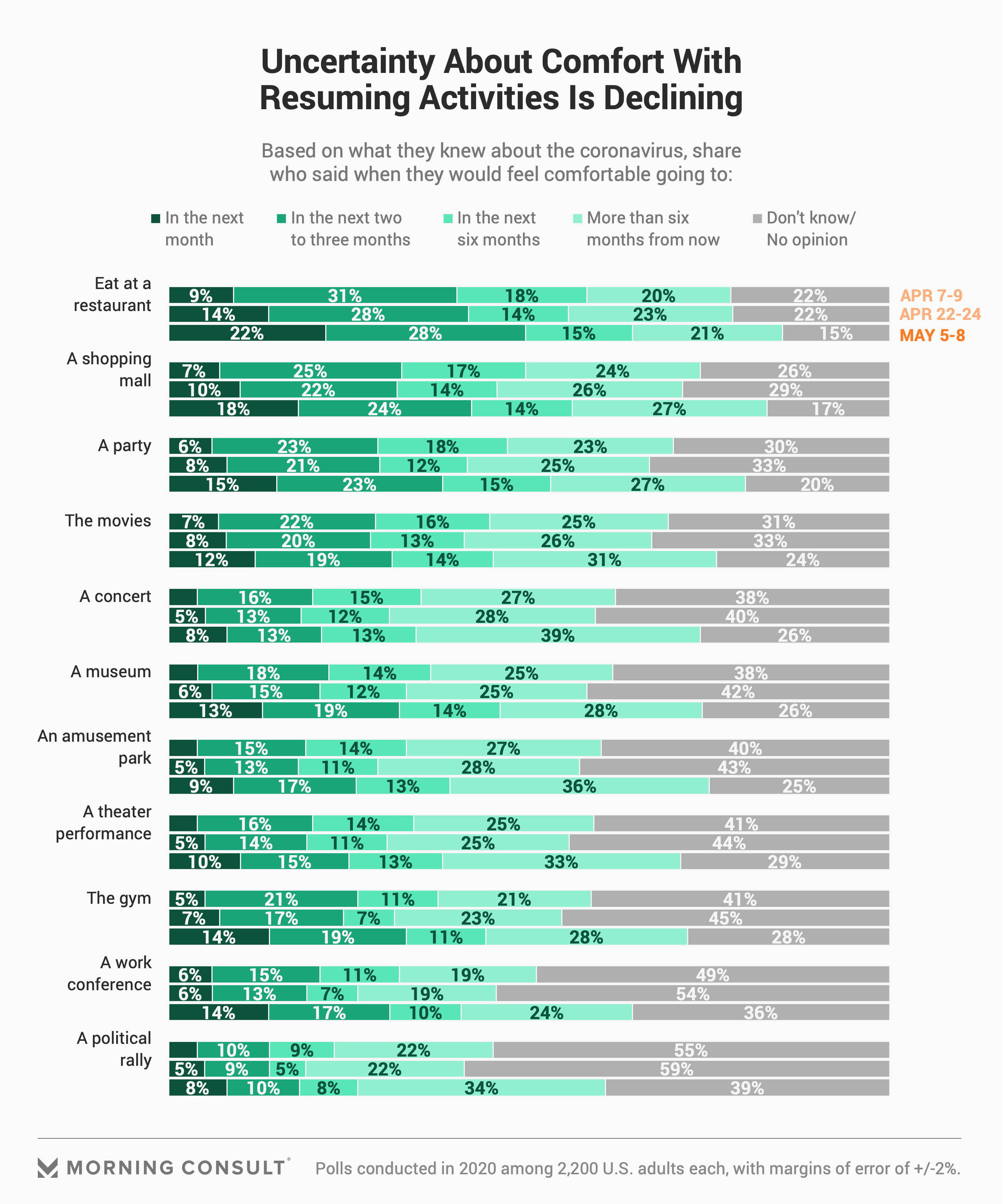 Since early April, Morning Consult has asked consumers when they anticipate feeling secure going back to venues such as restaurants, malls or movie theaters. The share of consumers in the latest poll, conducted May 5-8, who said they weren’t sure about when they’d feel comfortable doing so has shrunk from when Morning Consult first asked in April 7-9 and April 22-24.

As more respondents put a number to their expectations, many are realizing it will be a while before they’d feel comfortable returning to everyday life. The share of consumers who said it would take at least six months for them to feel comfortable at a concert, an amusement park or a movie theater, for example, all rose.

The outlook is better for others: 22 percent of adults said they’d feel comfortable dining out at a restaurant or cafe within the next month — the largest share measured among the various activities, and a double-digit increase from the 9 percent who said the same in early April.

Each survey was conducted among 2,200 U.S. adults and has a margin of error of 2 percentage points.

Restaurants in some states have been allowed to reopen with restrictions, with many pivoting to drive-through and pick-up business only. Starbucks Corp., for instance, expects to have more than 90 percent of its U.S. stores open in early June with modified operations, according to a company spokesperson.

Related: As Some States Reopen, Few Americans Are Comfortable Going Out Right Now

The coffee chain is not yet offering seating at any of its company-operated stores, but in a letter to employees on April 16, Chief Executive Kevin Johnson said about 80 percent of orders were placed “on-the-go” for pickup even before the coronavirus crisis.

Yum! Brands Inc. Chief Executive David Gibbs said in an interview with Bloomberg that the company, which owns fast-food chains including KFC, Pizza Hut and Taco Bell, will take its time reopening, learning from other companies that do so sooner.

The number of people who said they expect to feel comfortable going to a shopping mall within the next month has been slowly climbing, up to 18 percent in May compared with 7 percent and 10 percent in April.

Major malls and retailers have also slowly begun to reopen their doors, but it was too late for some brands: J.Crew Group Inc. and Neiman Marcus Group, two mall staples, both filed for Chapter 11 bankruptcy on May 4 and May 7, respectively.